There’s tons of things to do in Tokyo, but during our visit, we coincidentally were there for the Sumidagawa Fireworks Festival. This year, it was on July 26. The Sumidagawa Fireworks Festival is a huge event held every year and attracts millions of people. We decided to head to Asakusa to see this event. We knew it would be crowded, but I have never been in such a huge crowd in my life. Asakusa is quite a tourist area, with the famous Senso-ji Temple. It is a Buddhist temple and the oldest in Tokyo. Both women and men were all dressed up in their kimonos as well! 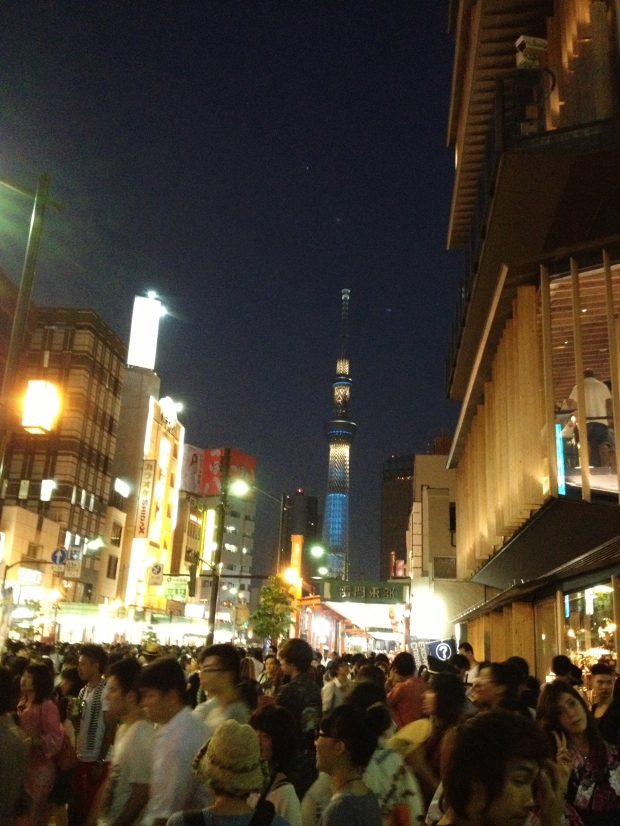 We didn’t really know where we going, so we just followed the crowds. At one point, we saw the Tokyo Skytree, a very new addition and tall building. It’s used mainly for broadcasting, but also features an observation deck and restaurant.

We finally figured out that everyone was trying to cross the Sumidagawa or the bridge that is over the Sumida River. You’ll literally be walking one step forward and stopping when you near this area. Here, you can see the Asahi Brewery buildings and that odd gold piece of art that is on top of the Beer Hall. Not too sure what it’s supposed to be… Anyways, there are tons of patrol here and the organizers assign groups of people numbers. The police will announce when each group can start moving forward. It’s super organized even though you are literally shoulder to shoulder to the stranger next to you. Now imagine this in 30 degree weather. Yup, sweaty arms brushing up against you. 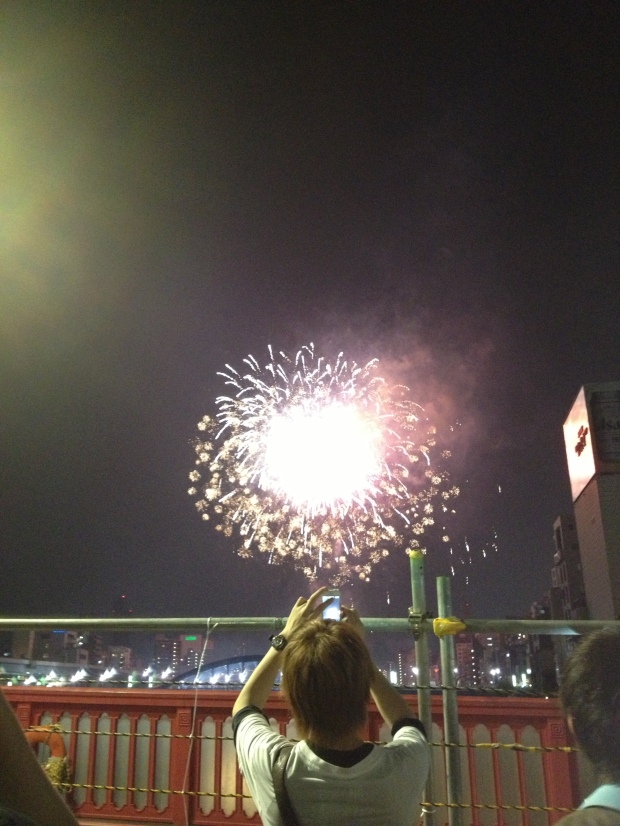 I couldn’t get a lot of nice firework pictures since I only had my iPhone, but it was pretty spectacular. Basically, the festival is very different from any of the ones I’ve been to. The idea is to let groups of people on the bridge so that they can experience the festival for at least 5 to 10 minutes. The displays are exploded from both sides of the river and is supposed to be a competition. The fireworks literally go on for 2 hours straight so that everyone has a chance to get on the bridge. Once you’ve had your time, they announce that you must proceed forward and let the next group view the fireworks. The fireworks are pretty crazy, with complicated shapes and colours that I’ve never seen. Apparently at one point, there was a Pikachu! Leaving the Asakusa area was also a nightmare. You could barely move and by the time you got to the train station, there are people patrolling the area to make sure not too many people crowd in the station.

I wanted to meet T since she coincidentally was in Tokyo as well so we decided to go to Ueno station for a late snack. Ueno is roughly 2 stations away, but it took us over half an hour to get there because of all the commuters trying to go home! Anyways, we finally arrived at Ueno station, and there are streets filled with bars and izakaya type of food. We decided to go to Fukumame which was on the 4th floor of a building. The restaurant is very posh looking and you get a lot of privacy with lots of barriers between tables. They are famous for their Yakitori, which are chicken skewers. I ordered the set which came with 5 skewers. To be honest, I was sort of confused at what I was eating. It didn’t exactly taste like chicken because it was very moist and soft. I feel like it was mixed with some sort of bean and battered with egg. Some had a teriyaki sauce on it, while other soy glaze, radish, and guacamole. They were good, but not meaty enough for me. 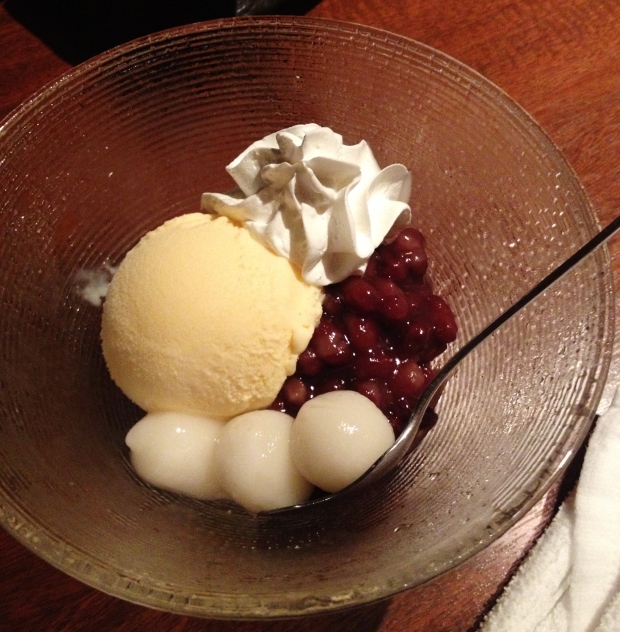 We also got a desert to share. It was the Vanilla Ice Cream with Mochi and Red Bean. A very typical scoop of vanilla ice cream topped with whipped cream and sweet red beans. I was sad that it only came with three mochi balls, but they were very good! I can’t comment too much about the food since we only ordered two dishes. However, based on what we had, it was decent and the atmosphere was really nice for long chats. And that ended our last night in Tokyo!