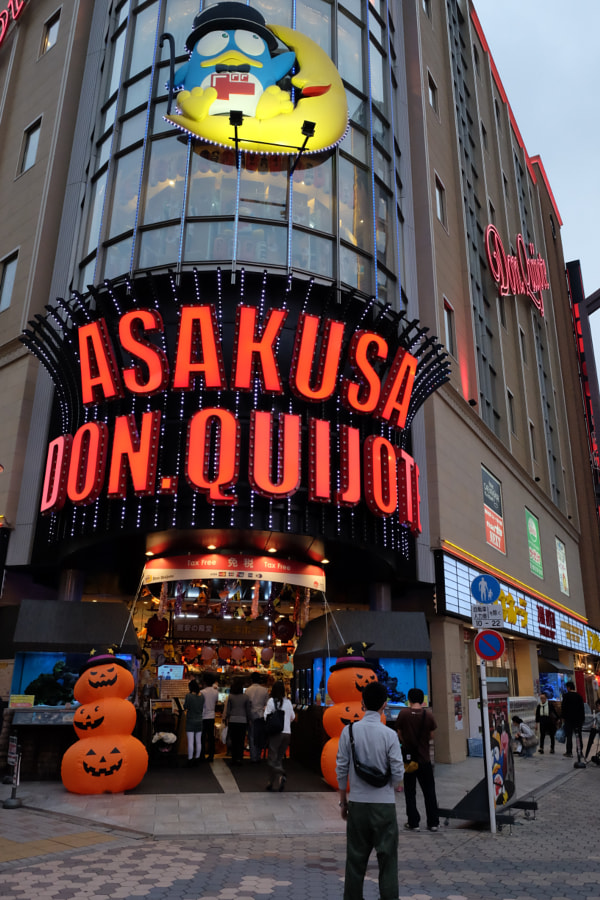 After visiting Akihabara, we decided to train to Asakusa which is known for the Sensoji temple. Funny how the first thing we saw was another Don Quijote store though! Oh by the way… if you are here around Halloween time and need a costume, this is the place to buy it! I bet you will stand out when you return to Vancouver! 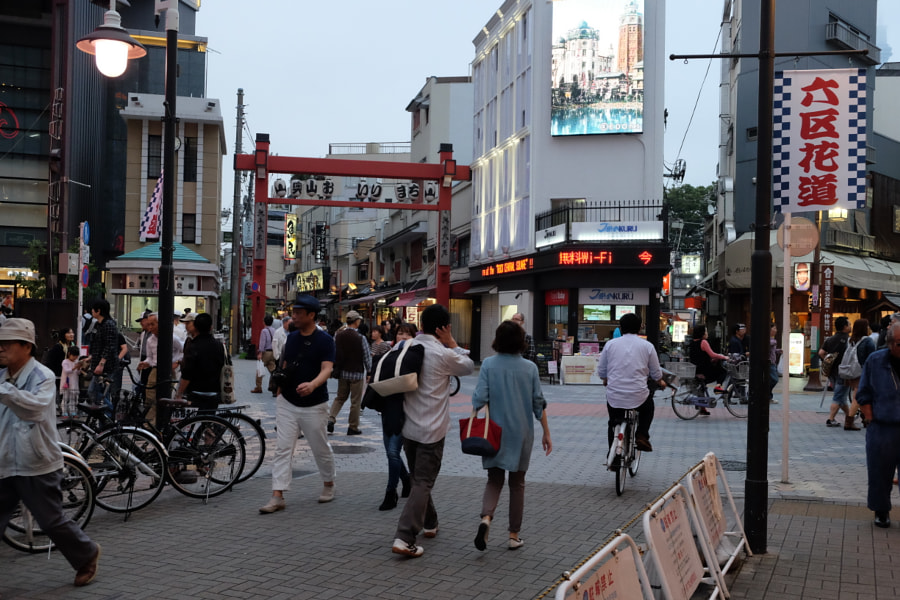 Asakusa has a mix of modern but older buildings as well. Asakusa was known to be the leading entertainment district back in the day. During the Edo period, it was the site of kabuki theaters and a large red light district. Today it is most famous for the Sensoji temple, Tokyo Skytree Tower, and the bridge above the Sumida River. I remember visiting a few years ago during one of their famous festivals and this was the spot to watch fireworks. It was crazy hectic! 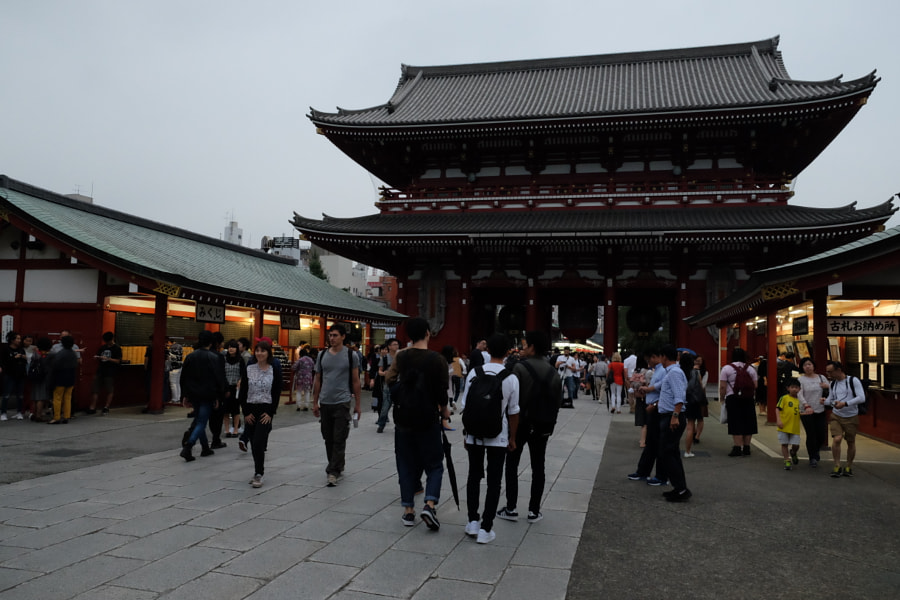 If you’re going to visit a temple in Tokyo, then you should probably check out Sensoji Temple, as it is probably one of the most famous in Tokyo. You’ll first walk through a large entrance gate called Kaminarimon which leads to Sensoji Temple. I believe there are two gates in total before you hit the temple. 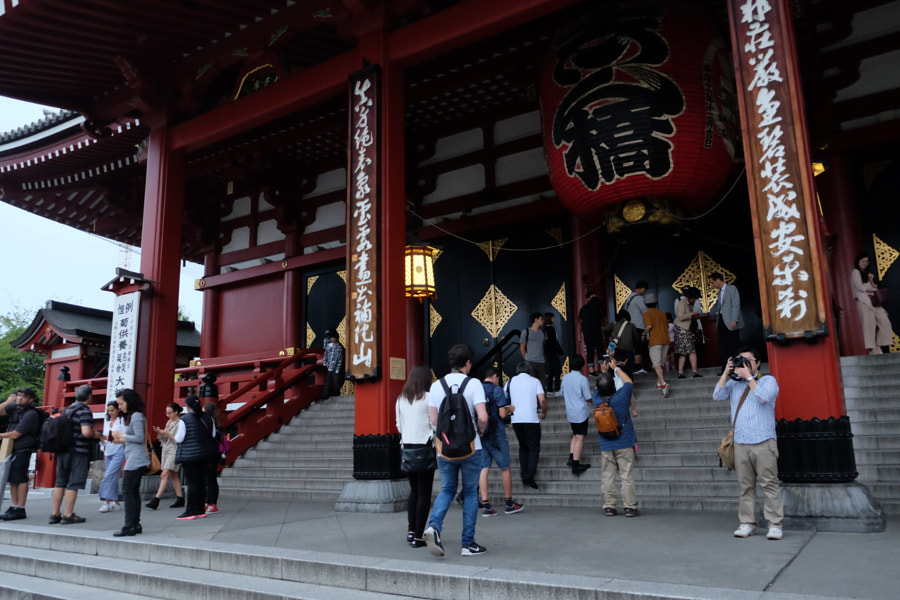 Sensoji is famous because it is one of the oldest Buddhist temples, built in the 7th century. However, the ones we see today were built post-war, so are reconstructions. Still, it is pretty neat, especially with the large Japanese lanterns. Admission is free and you can usually go inside the temple but when we arrived it was near closing. The temple closes at 5pm. 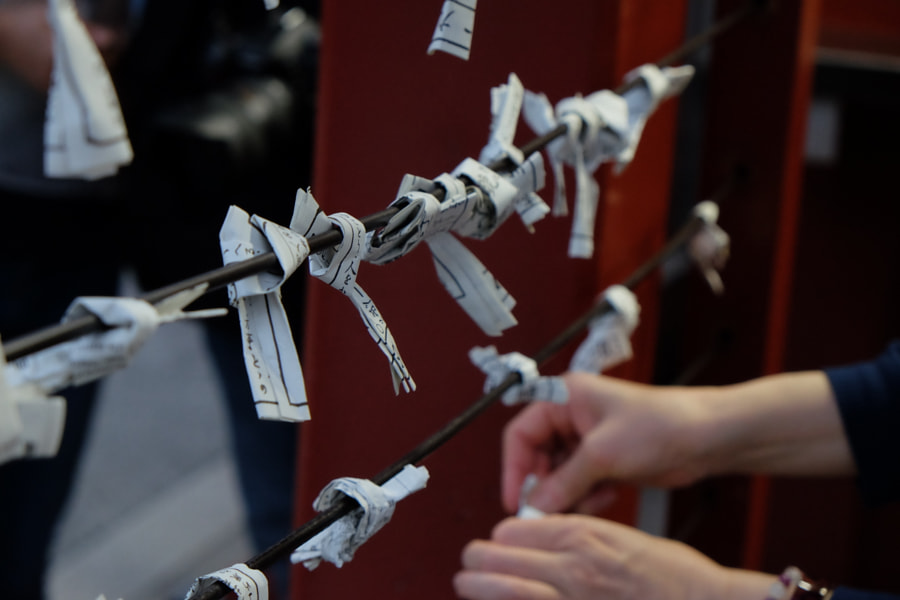 You will find tourists and locals doing rituals here such as writing a wish and tying it on this bar in a knot. There is also a water fountain where you pour the water over your hands along with some other rituals which are supposed to give good luck. Look around you and follow if you want to try it out! 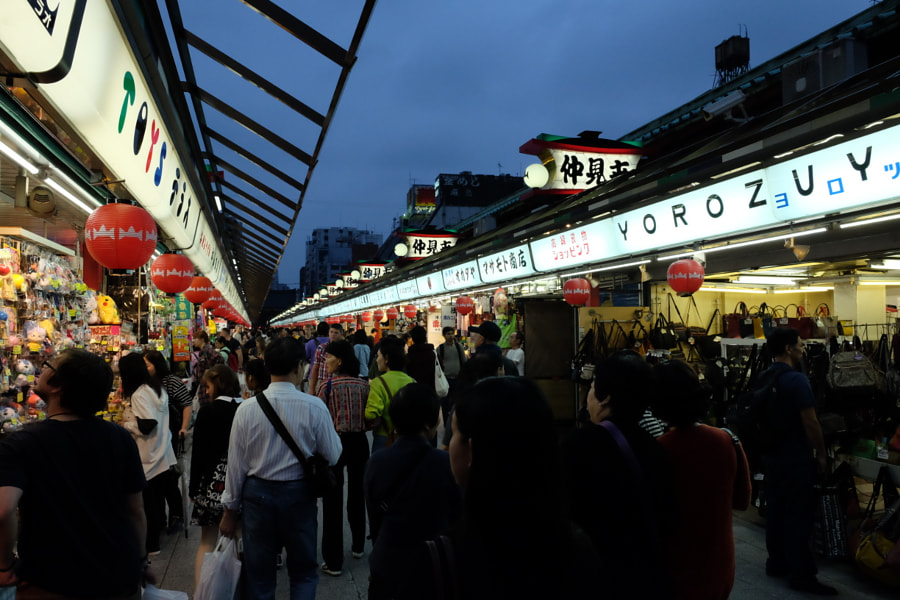 Between the first gate and the second gate, you will find a shopping street of over 200 meters, called Nakamise. You will find traditional Japanese souvenirs as well as local snacks here. At night time, it is lit up and is quite lively. 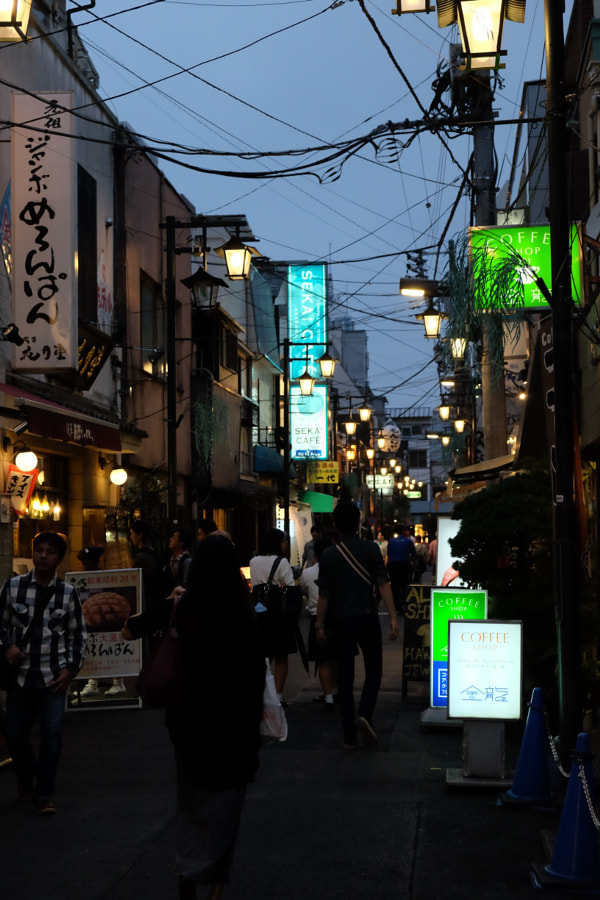 My friend had told me there is a bakery that I needed to try at Asakusa. Tucked away in a street off this busy shopping street is Katgetsudo. They are famous for melon pans! 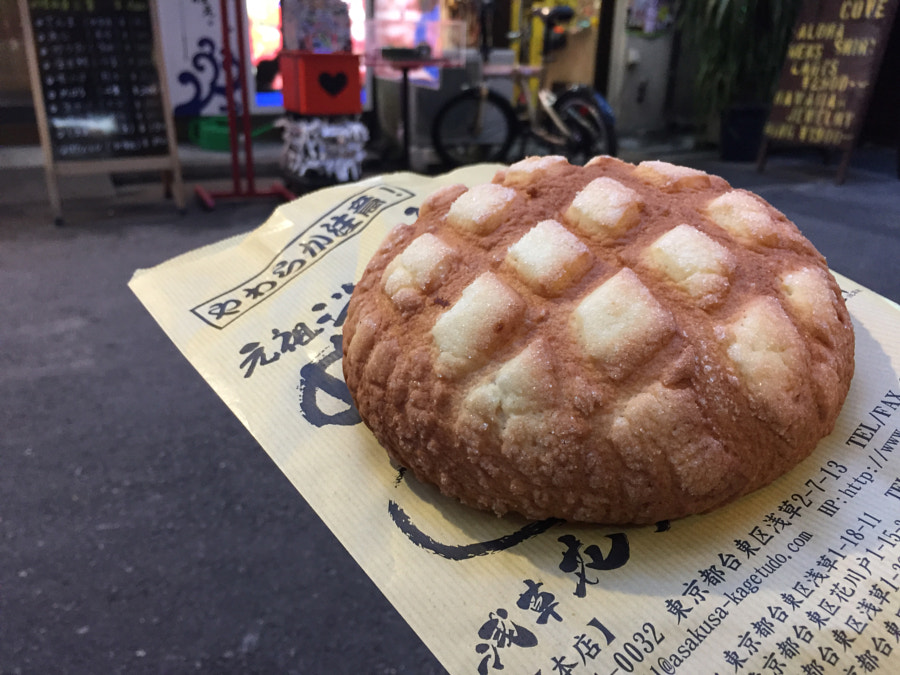 Melon Pan is a sweet bun with a cookie like crust at the top. It is shaped like a melon, hence the name. It had some crystalized sugar on top, and when warm, the bun was soft and fluffy! Too bad we arrived near closing as well, or else they have other varieties to choose from, including adding ice cream inside. I thought it tasted like a pineapple bun that we commonly eat in Hong Kong. Worth trying as it is a cheap snack and Katgetsudo is known to be one of the best! 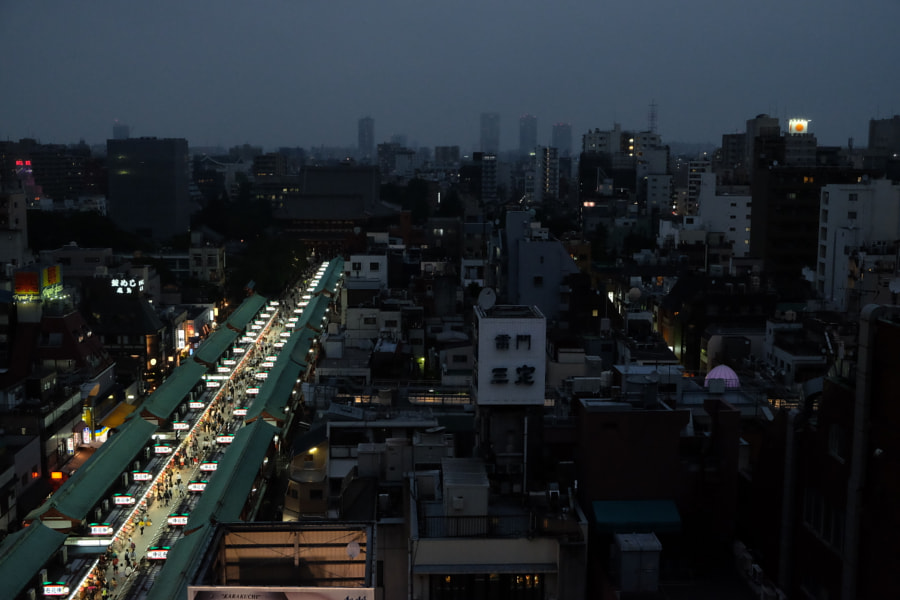 After snacking, I suggested we visit the Asakusa Culture Tourist Information Center which is nearby as I heard they have a free observation deck. The center is only eight stories, but you can still get a good view of the Nakamise shoppign street and the Sensoji Temple. It was quite gloomy that day, but I would suspect you can get some decent pictures. 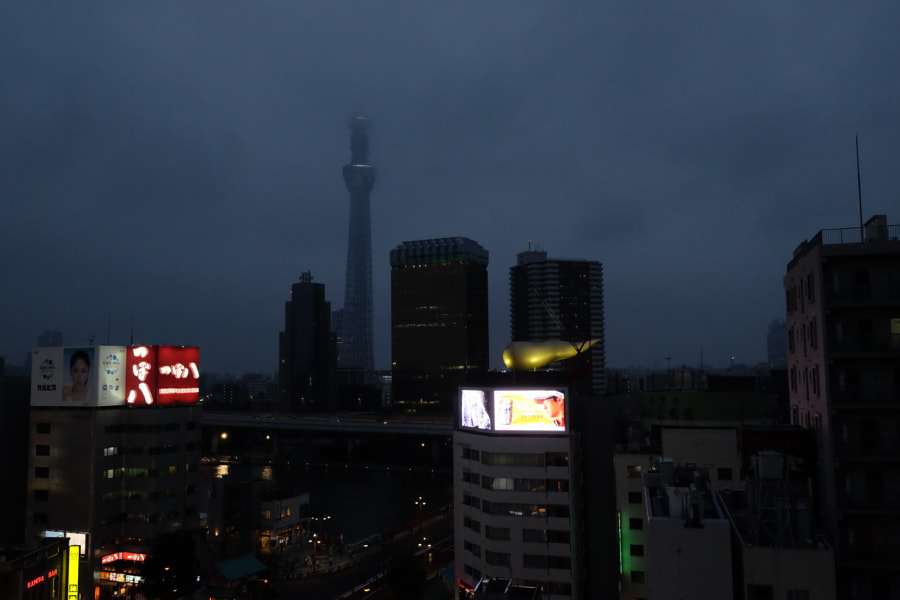 To our right, we saw the Tokyo Skytree and what is that…? A golden yam? Turns out that is the Asahi Beer Tower and Asahi Super Dry Hall! Too bad we didn’t get a chance to check it out. I believe they have a restaurant and beer on tap. 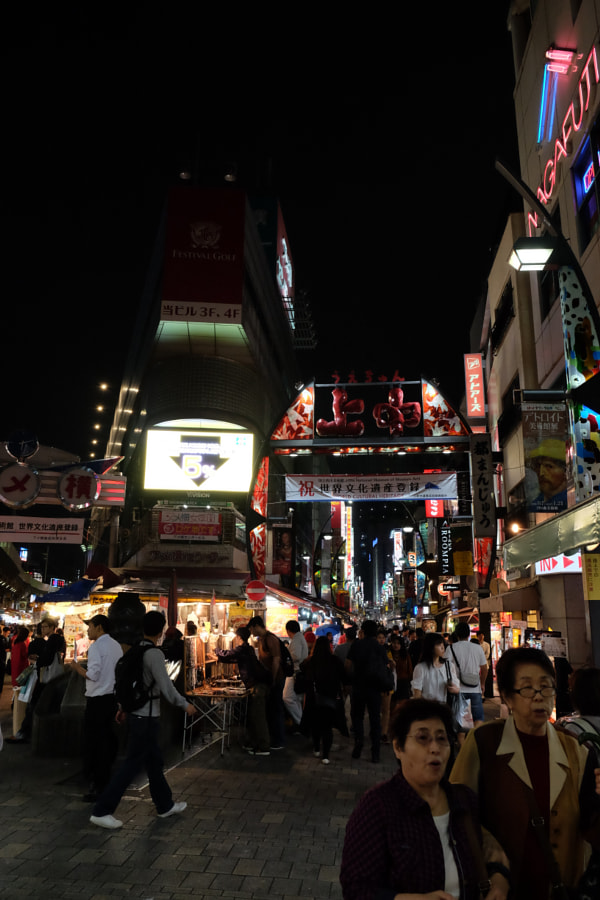 We decided to then head over to the Ueno district to look for food. Ueno is famous for its park and also many museums. However, if you get off at Ueno station and walk out, you will find that there are tons of restaurants along the streets. There was also a street that sort of reminded us of a night market. 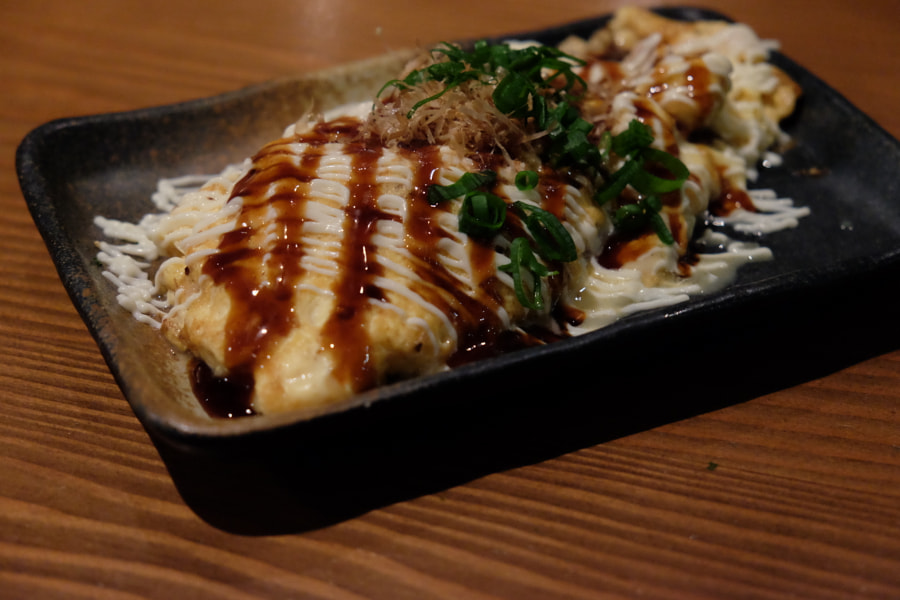 We ended up finding this building that housed many restaurants and found a izakaya type restaurant called Kotekichi. They featured okonomiyaki and many omelette type of dishes. First up was a pork omelette filled with cheese and topped with mayo and takoyaki sauce. Really enjoyed this piping out. 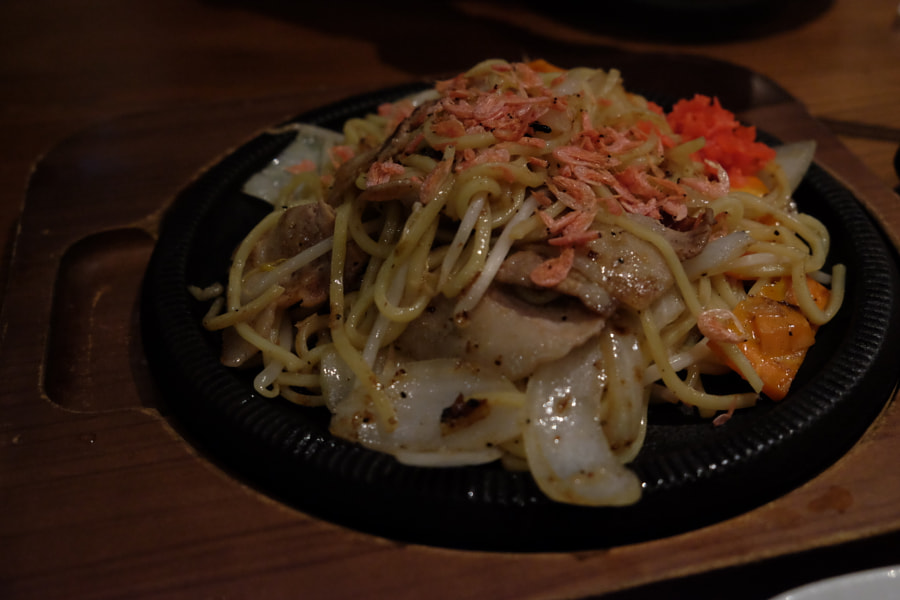 Next was a shrimp yakisoba. We were surprised that the shrimp were tiny dried ones. The flavour was great but I wanted fresh shrimp instead. Guess that would’ve cost a lot more though! 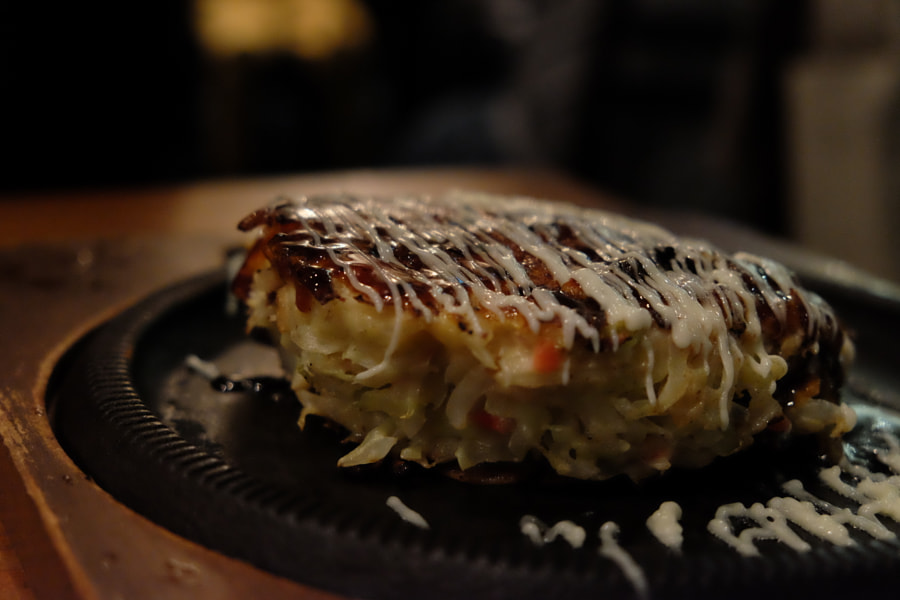 Last but not least was a seafood okonmiyaki. They actually brought us the okonomiyaki with the wrong filling so we returned this back to the kitchen and they were very nice about it. Perhaps there was a language barrier issue! 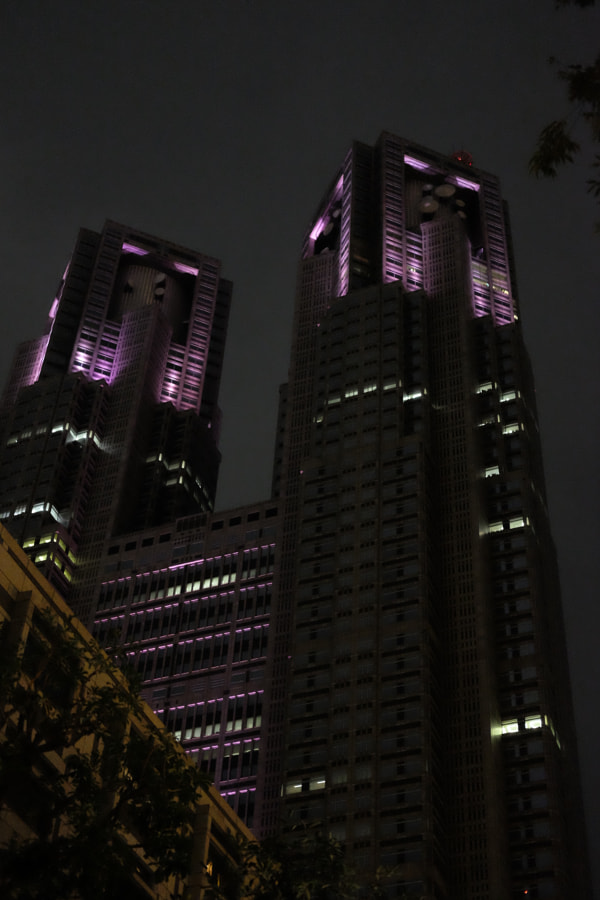 After dinner, we headed back to Shinjuku and S suggested we walk to the Tokyo Metropolitan Government Building (東京都庁). He read online that we can visit the observation deck for free. What a great idea because you can get a panoramic view of the city! We visited at night time, and I believe it closes at 11pm. However, there was still a line up to go in. We probably waited around 30 minutes as they have security check and also a wait to go up and down the elevator. The view was amazing and well worth the wait, especially since it’s free!