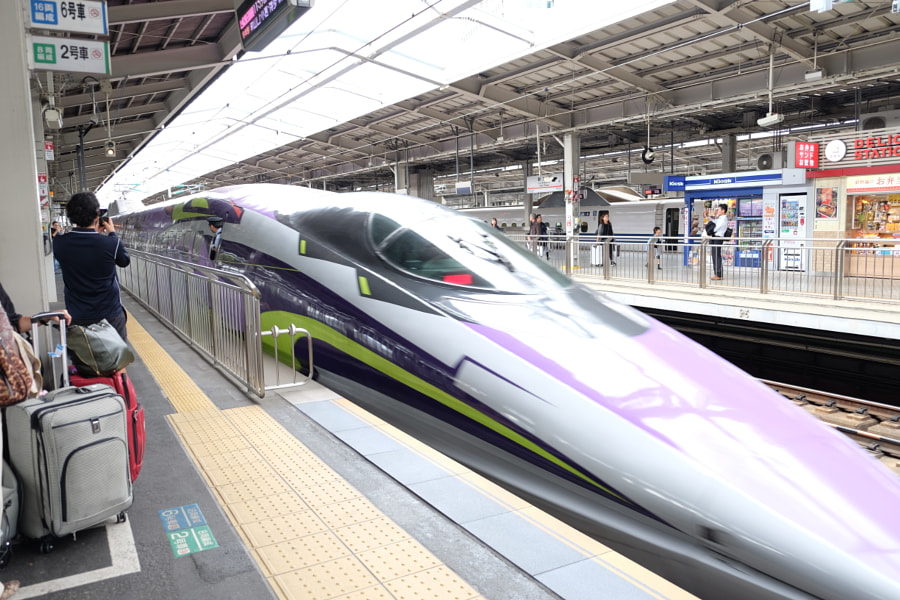 On the last two days of our Japan trip, we would be spending it in Hiroshima (広島). From Osaka station to Hiroshima station, it takes around 2.5 hours with the JR bullet train. A long train ride, but the JR shinkansens are so comfortable, so time really passes by quickly. 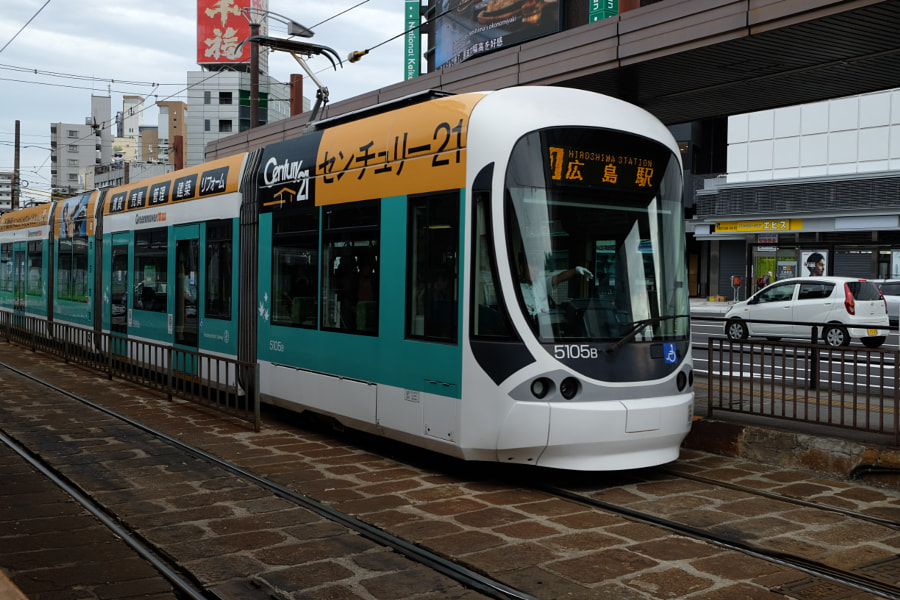 Once we arrived at Hiroshima station, we needed to take a tram to our Airbnb. Hiroshima uses trams instead of trains to get around the city. There are a mix of new and older trams. This one is one of the newer trams and is quite nice! 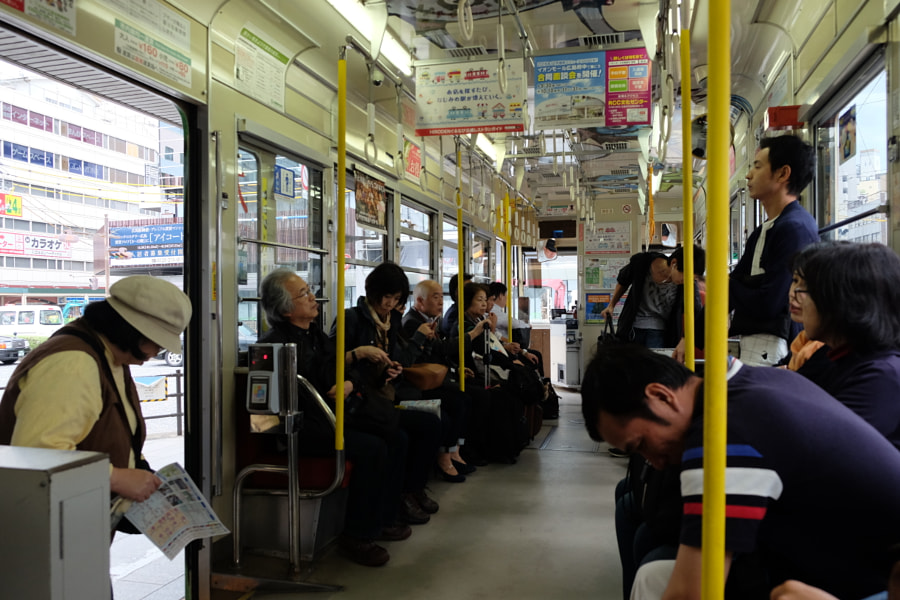 The trams are quite spacious and work similar to the buses. You can use the Paspy and Icoca IC cards to pay for your fare on the trams and buses in Hiroshima. 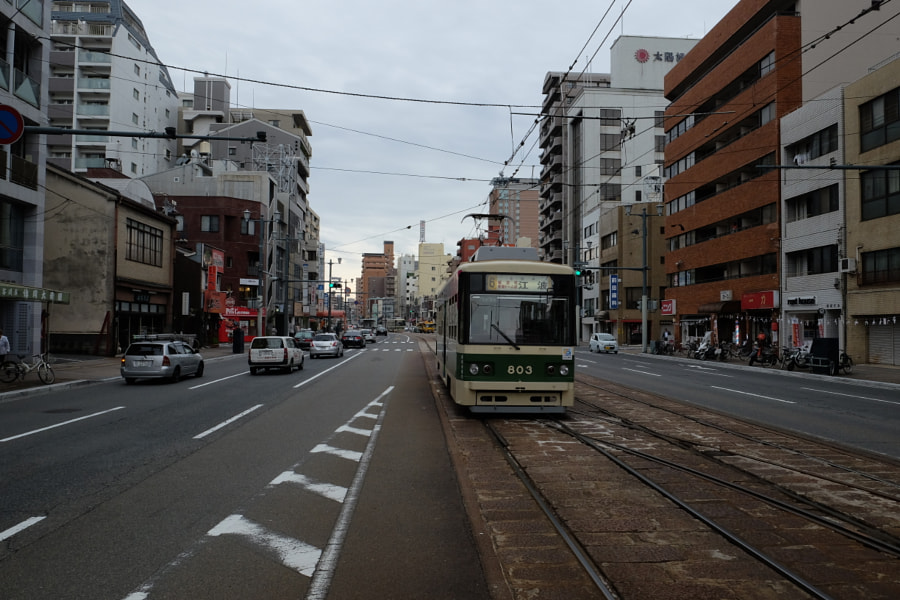 The city streets in Hiroshima are definitely much more modest and quiet. You won’t really find the neon lights and electronic billboards like you would find in Tokyo. I do appreciate that the city is much more spacious and the likelihood of being in crowds like in Tokyo and Osaka is unlikely. 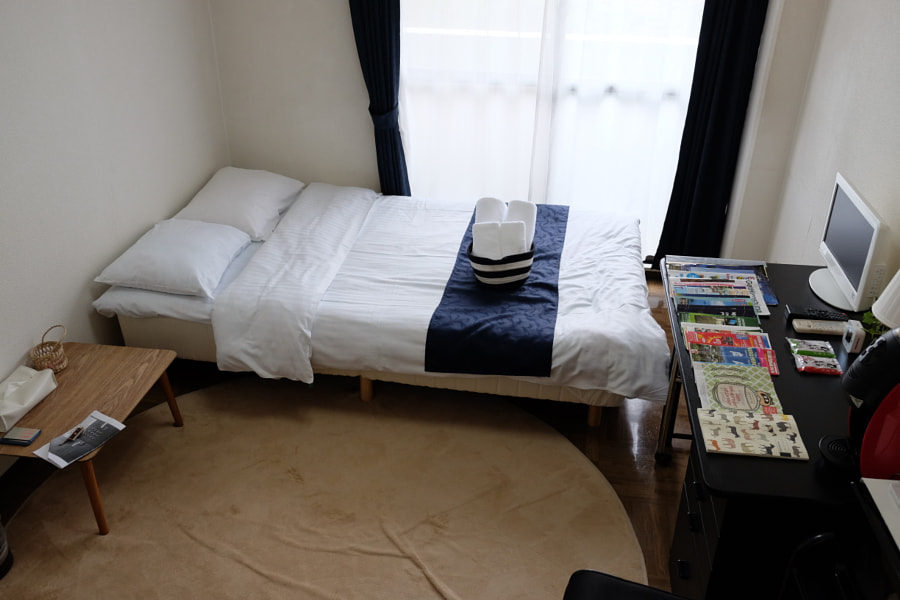 Our Airbnb was a short walk from the tram and also walking distance from the A-Bomb Dome. The room was definitely very cozy and one of the smaller Airbnbs we stayed in. However, it had everything we needed and was extremely clean. There was even a huge bottle of sake for us to enjoy! 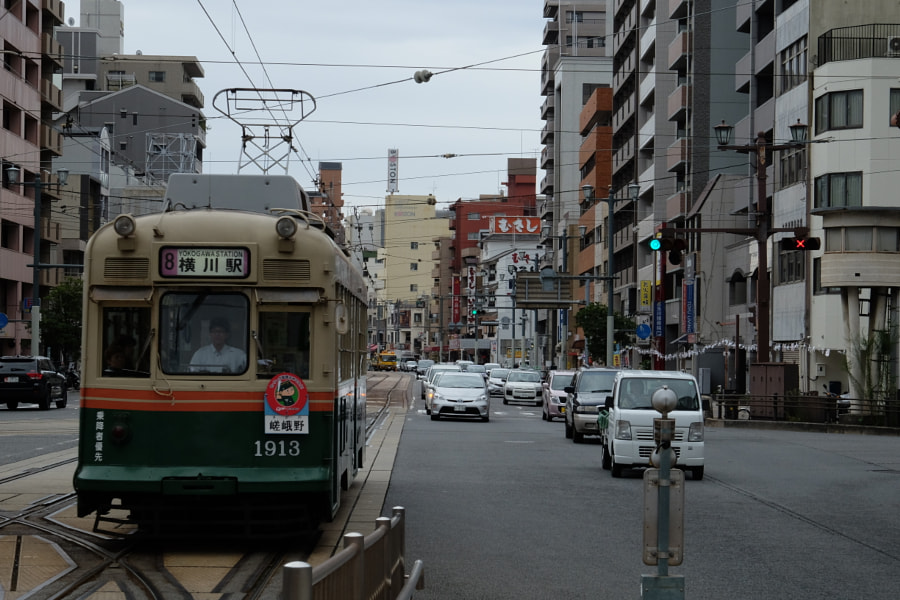 After settling in, it was already mid afternoon, so we decided to head to Miyajima Island. Our initial plan was to visit the island the following day after visiting the Peace Memorial Museum as we thought it would be more uplifting, but due to the time we arrived, it didn’t make sense to visit the museum near closing. 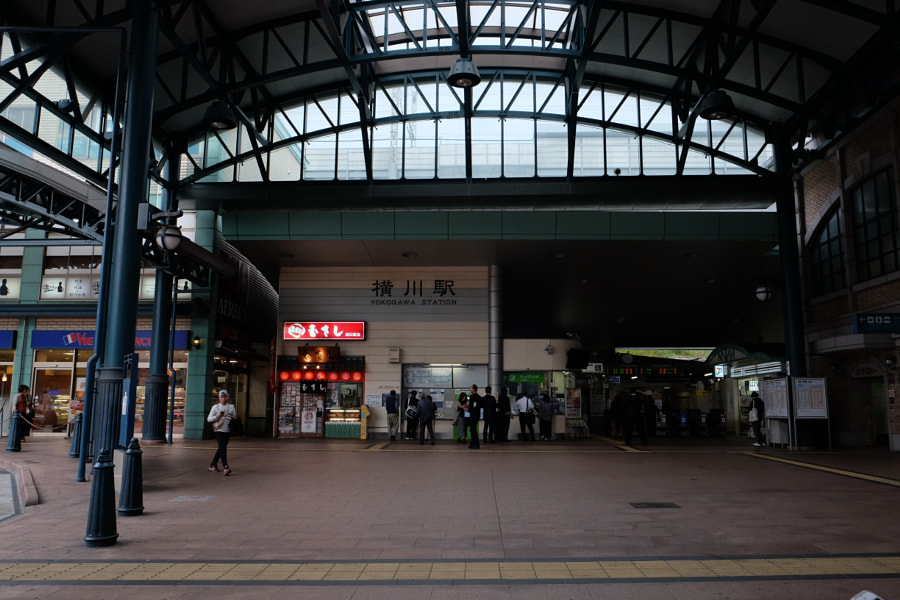 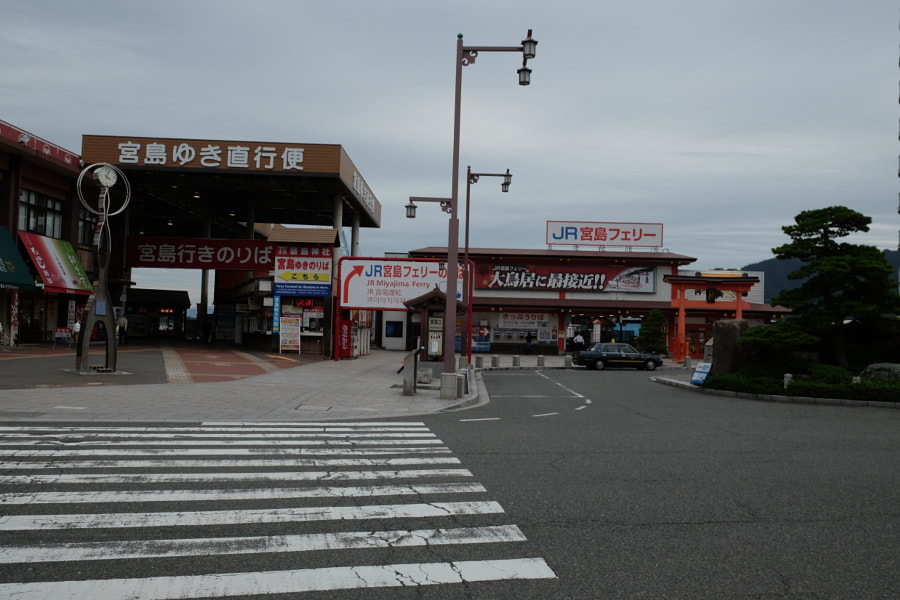 When you get to Miyajimaguchi Station, follow the signs and you will find the ferry pier. 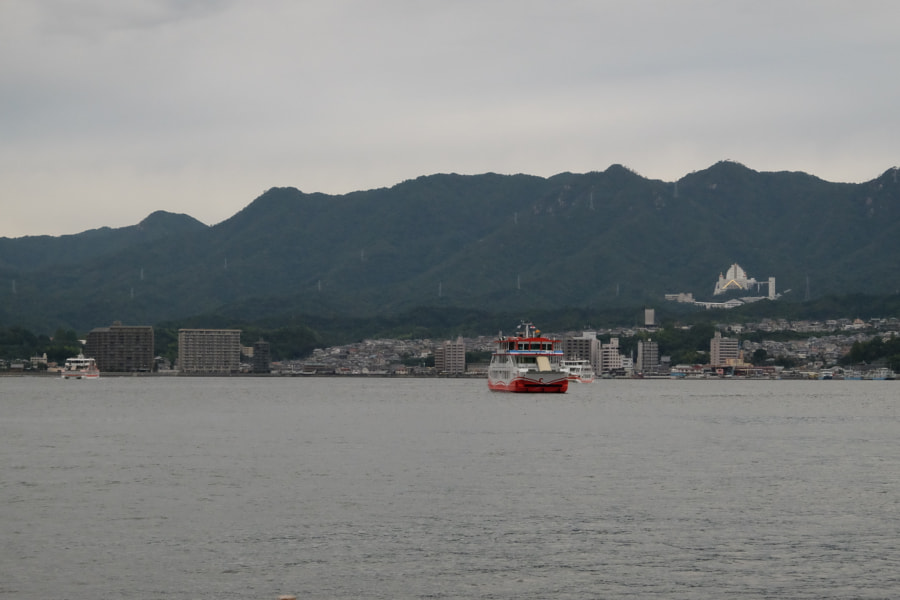 The ferries depart quite frequently to Miyajima Island and only takes 10 minutes. This is covered under the JR rail pass if you have it. 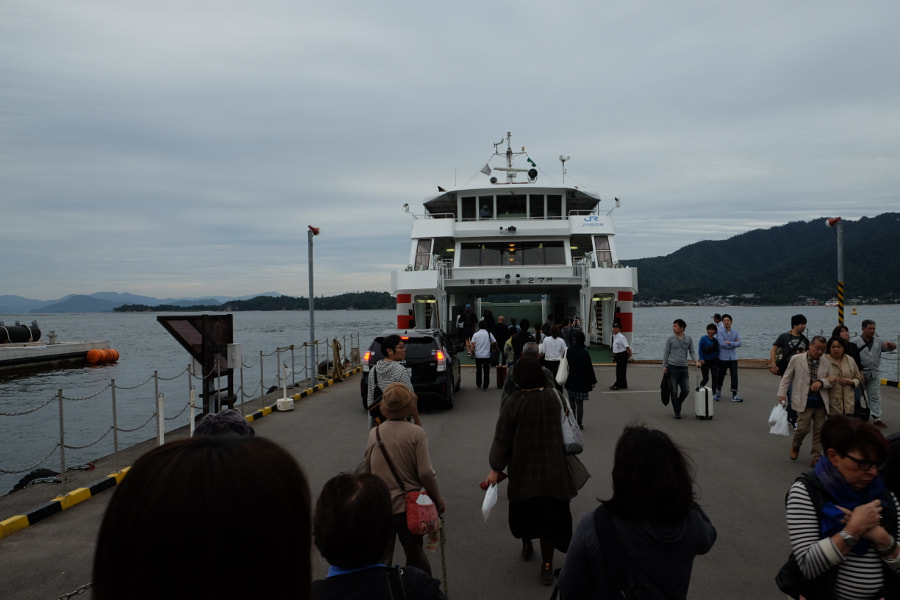 The ferry is quite large and you can even stand outside to take pictures. I think you can also bring your car on the ferry. As we were departing quite late in the day, there were not that many people on the ferry, making it easy for us to get a good spot for sightseeing. 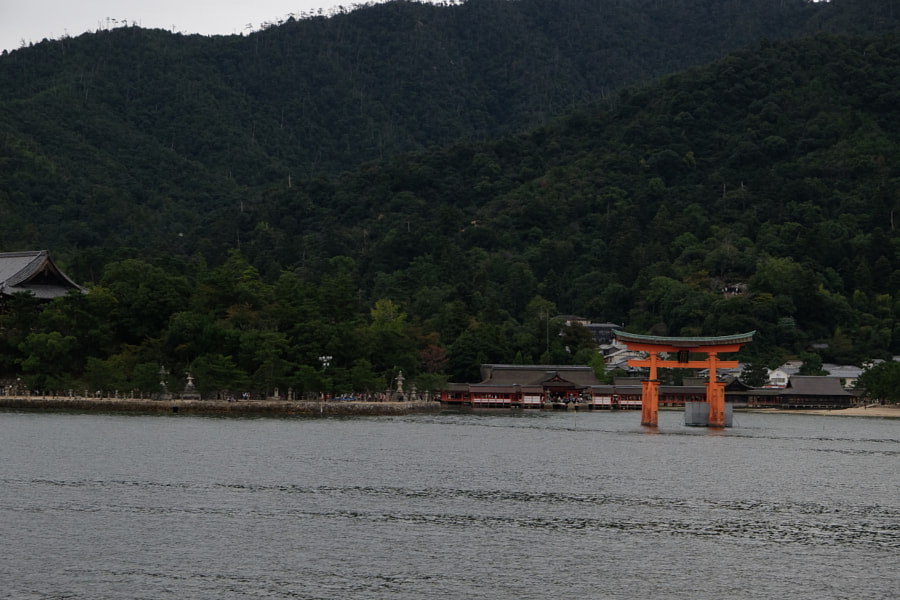 The ferry ride seriously goes by in no time. As we reached Miyajima Island (宮島), we saw the famous red torii gate which floats on water. 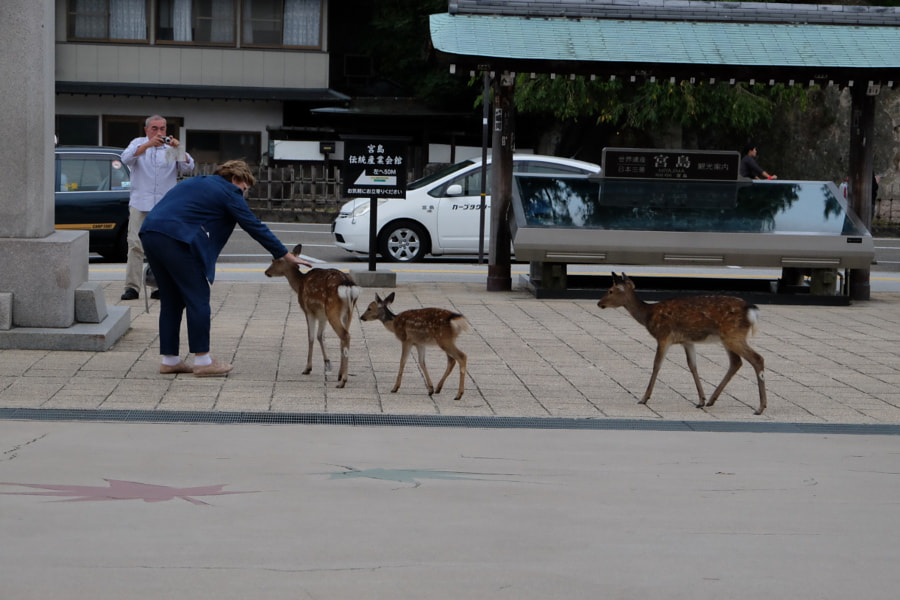 Once we got off the ferry, we realized that there are lots of deer on this island! Very similar to Nara, but of course not as many. I really wonder how they got to this island! If you don’t get a chance to visit Nara, then this will do! 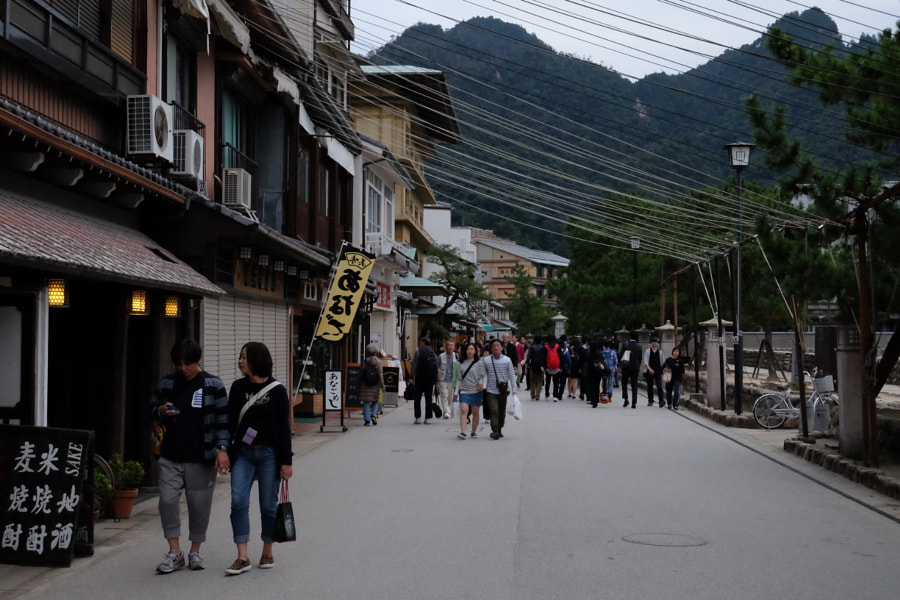 Along the way, there are some shops that sell souvenirs and snacks. 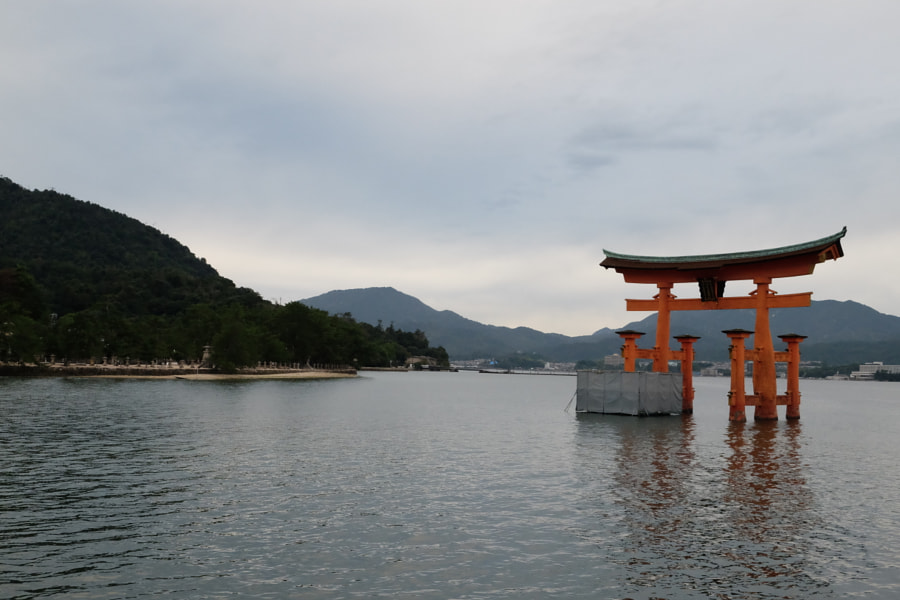 After a short walk, we reached the floating red torii gate. This is the view you get if you choose not to pay to enter the shrine. It’s pretty good but more on an angle. Unfortunately, there was a bit of construction going on, so the gate was slightly blocked. As we reached the island in the late afternoon, this was high tide and therefore the gate appears to be floating. If you arrive earlier in the day, the tide will be low and therefore you can actually walk all the way out to the gate! You should check out this website to time when you visit the island so you can hopefully visit at both low and high tide! 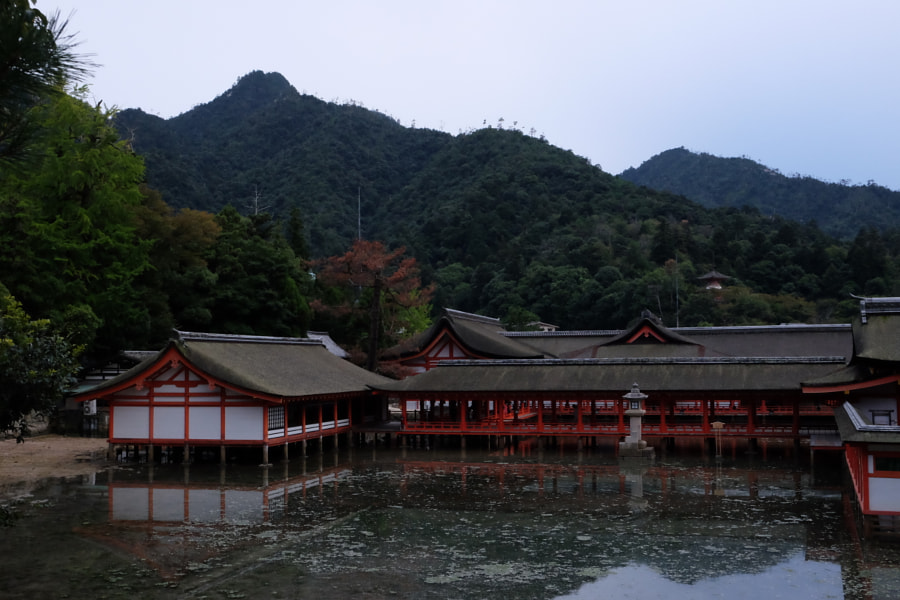 This is the Itsukushima Shrine (厳島神社) which is also built over the water. Entry fee into the shrine is 300 yen and consists of multiple buildings, including a prayer hall, a main hall and theater stage. You will also get a view of the torii gate straight on instead of at an angle. We didn’t end up going inside the shrine, but would imagine this is a great attraction especially during low tide so you can wakl straight up to the gate. 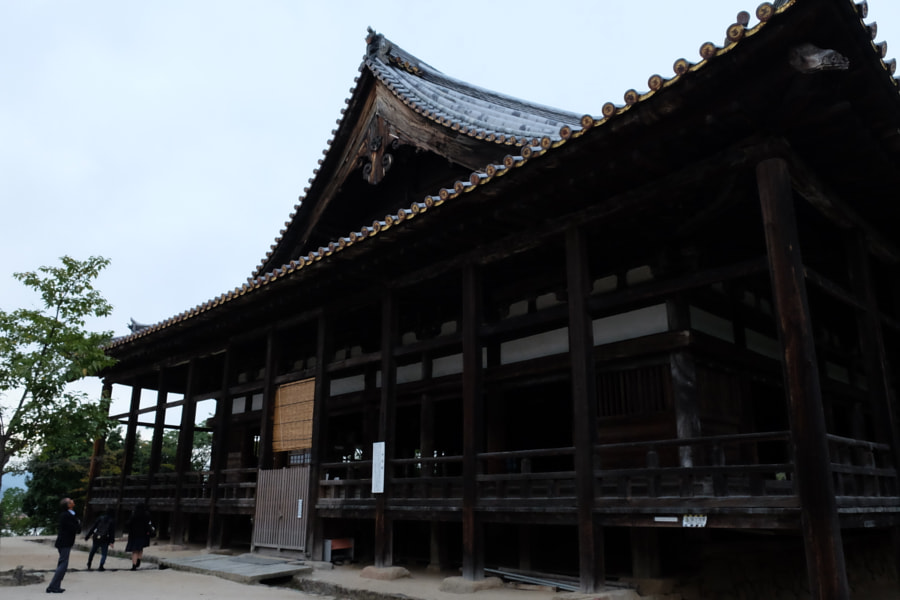 Not far from the shrine, a small hike will get you to the Senjokaku (千畳閣), which translates to the pavilion of 1,000 mats because the size of the pavilion can literally fit 1,000 tatami mats. This old building dates back to the 1587 and this costs 100 yen to enter. It is the largest structure on Miyajima Island. 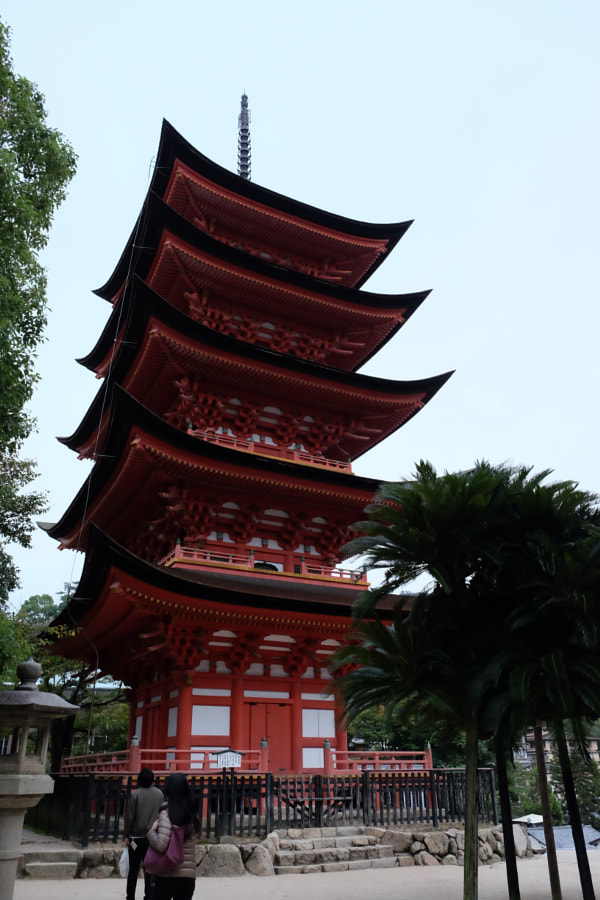 The Five-storied Pagoda is adjacent to the Senjokaku and was originally built in the 1400s but restored in 1533. It enshrines the Buddha of Medicine and is quite beautiful to see up close. I don’t think you can enter inside, so the attraction is free to view. 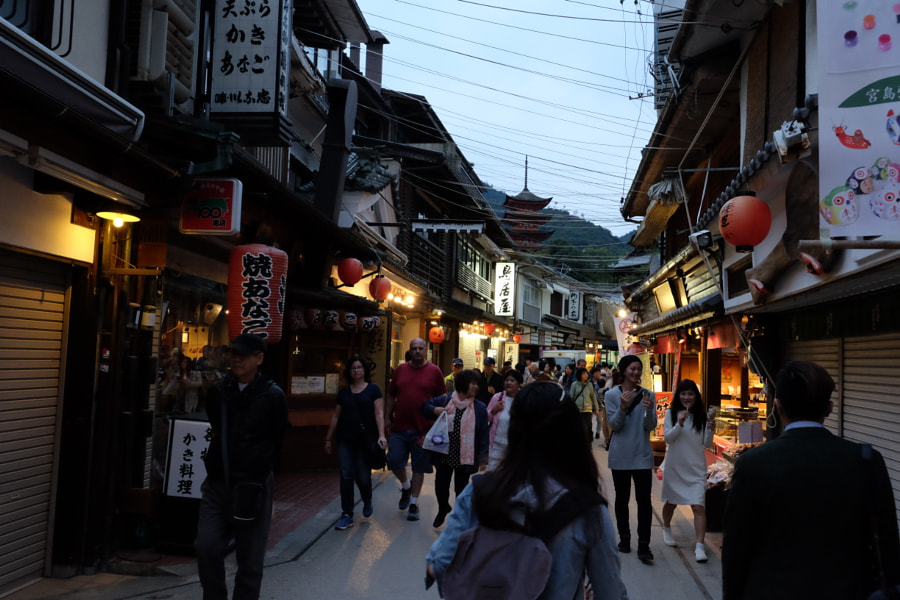 As the sun set, we decided to head back to the souvenir streets. Many of them had already closed as it was rather late. I imagine there isn’t much to do around the island at night if you stay overnight here. 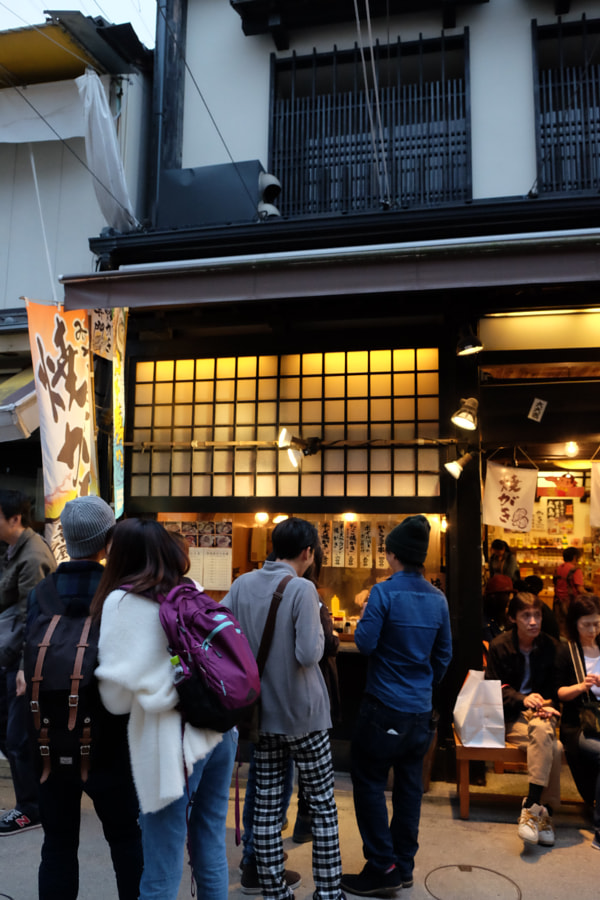 There was one shop that was bustling with crowds. This was the grilled oyster stall! There are actually many grilled oyster stalls along the Miyajima Omotesando shopping street. However, as we went pretty late, most of them were closed. This stall itself closed shortly after we placed our order as well. 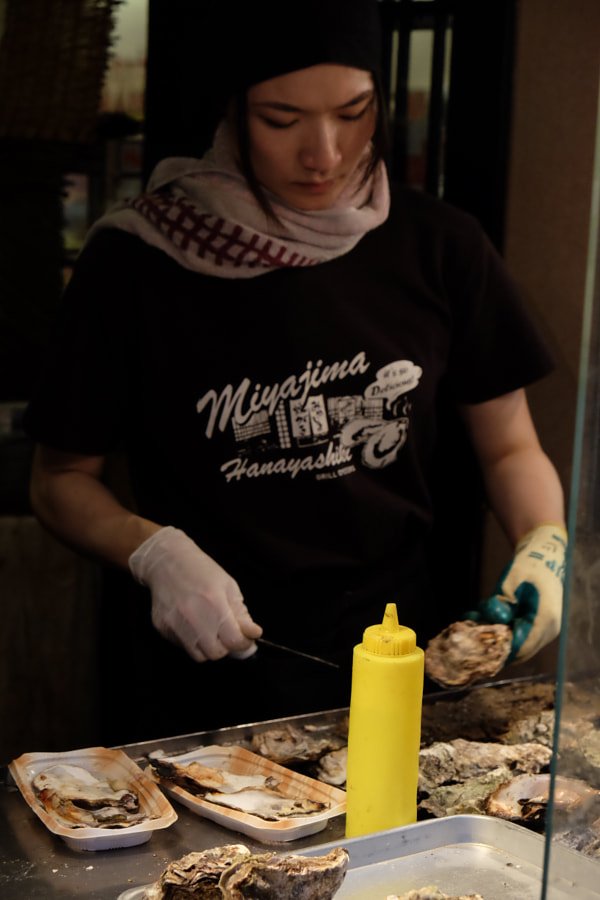 Here, you can get a variety of ways the oysters are cooked. Of course, the most famous is to get them grilled with charcoal. The grilled oysters here are a pretty good deal at 2 for 400 yen. However, the downside is this is just a stall, so there are no seating areas. There are a few stools around but more of a quick eat and go stop. 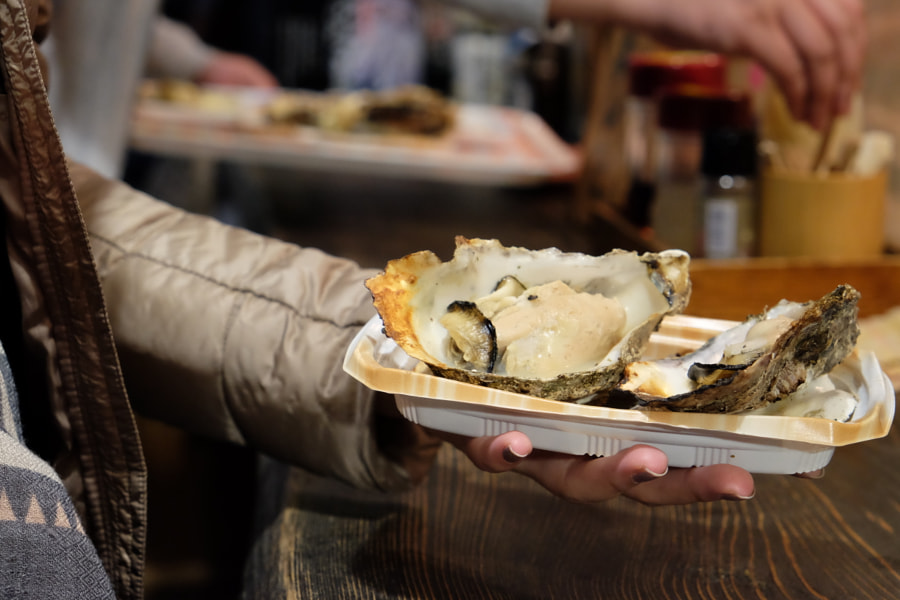 The oysters take a while to grill, so we walked around the streets before heading back to grab our order. Here, we have two grilled oysters. A nice char and the oysters themselves are plump and fresh. Highly recommend if you’re an oyster lover! 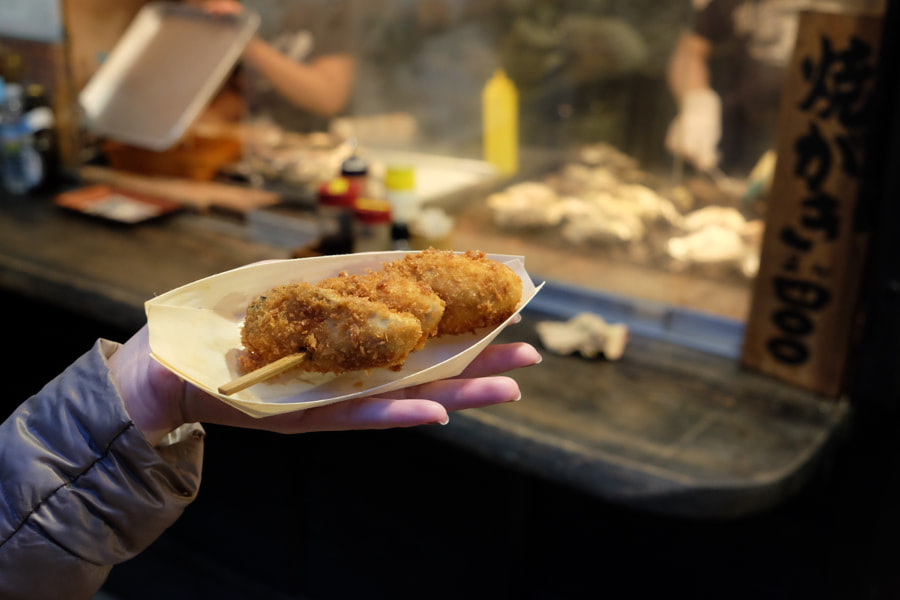 We also got the deep fried oysters. These are smaller oysters which they have skewered onto a stick. Really good as well! If you are looking for a sit down restaurant for oysters, then Kakiya and Yakigaki are among the most famous on Miyajima Island. Oysters are a must eat in Hiroshima and Miyajima! 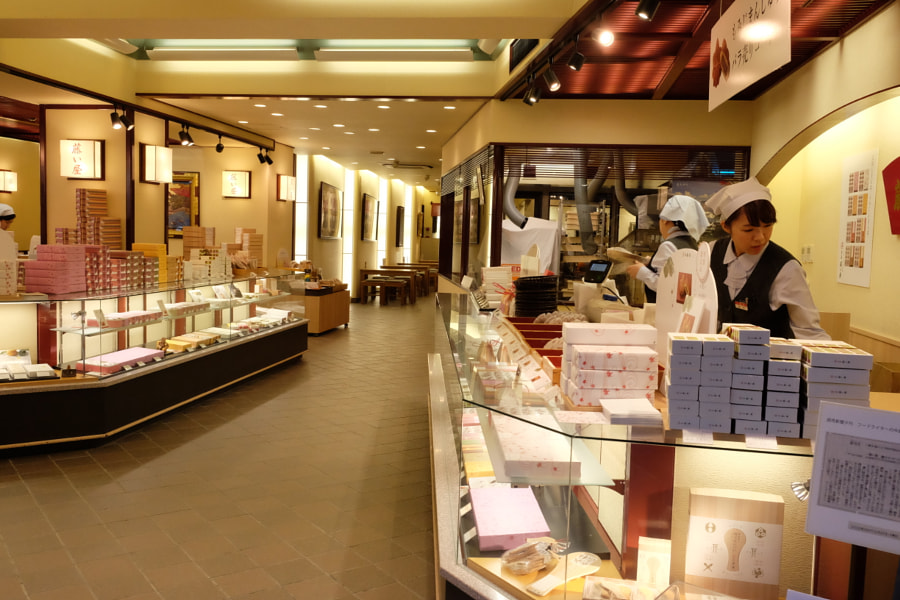 Another well known food item is the Momiji Manjyu, which are maple leaf shaped pastries filled with a variety of filings including red bean, custard, chocolate, etc. There are many souvenir shops selling this pastry. 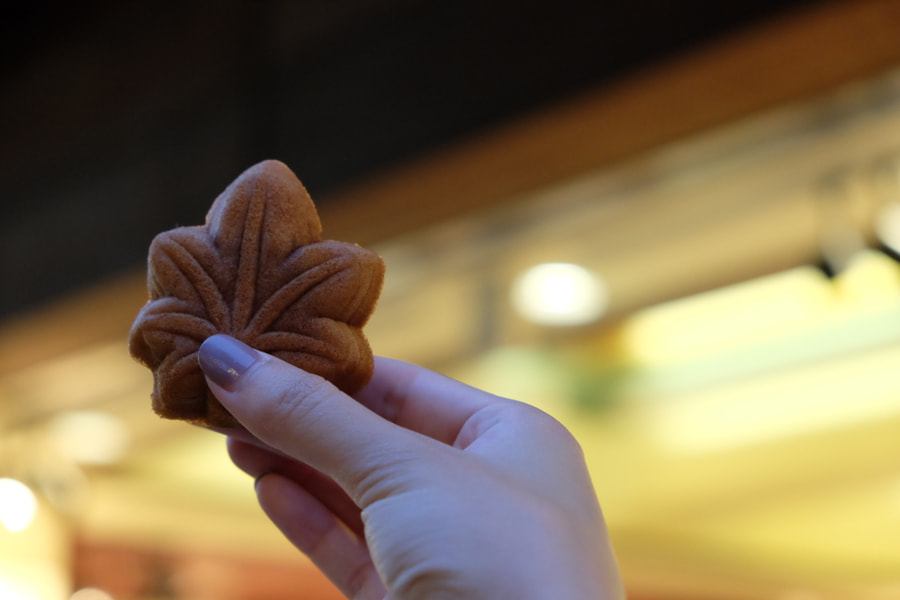 Luckily, we were able to find a shop that sold single Momiji Manjyus since I just wanted to give it a try. We got one filled with custard and it was very tasty! Worth giving a try! After having some snacks, we decided to head back to Hiroshima by ferry as it was getting late. 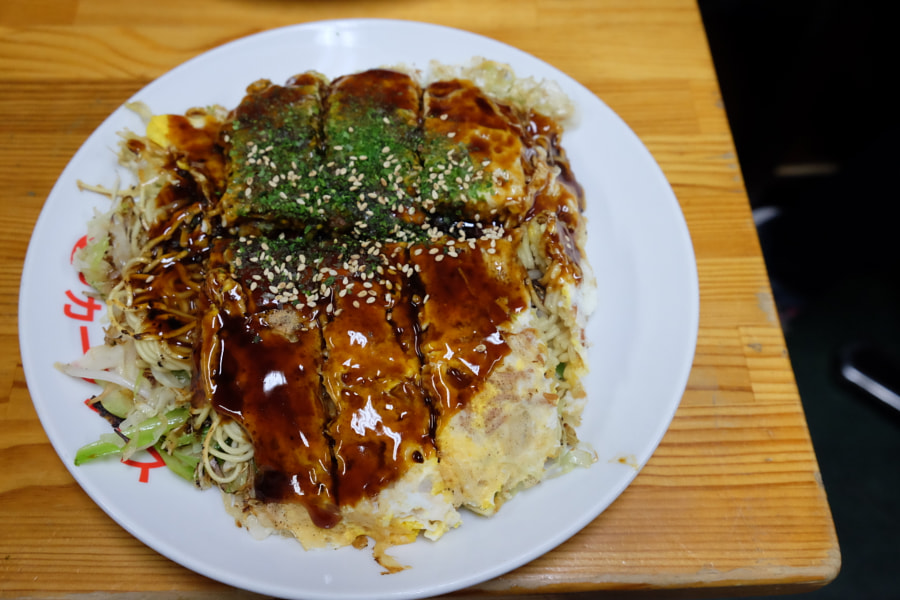 We did some research and learned that the 2nd floor of Hiroshima Station is the ASSE restaurant floor and filled with okonomiyaki shops. Okonomiyaki is very famous in Hiroshima and a must try. The okomiyaki here is very different than Osaka style as the ingredients are layered rather than mixed. Honestly, I don’t remember which restaurant we visited since they all look the same. Just head into one that has a decent amount of locals! This one had yakisoba noodles. 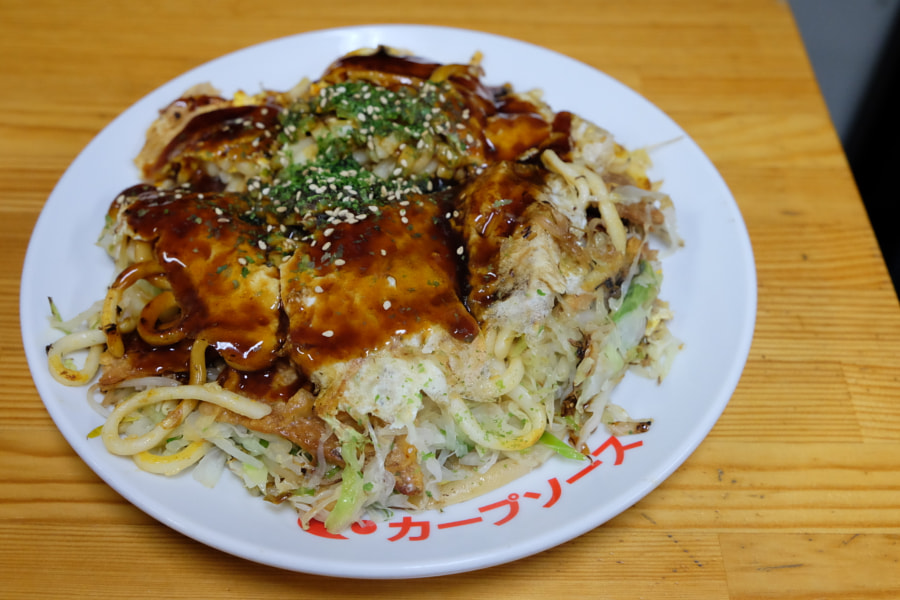 We also got another one which had yakiudon noodles. My favourite was the yakisoba as it is much lighter than the udon. These okonomiyaki’s are huge and is more than enough for one!

Overall, a nice day trip to Miyajima Island to relax and the next day we would visit the major attractions in Hiroshima.