The next morning, we woke up to the beautiful sunshine in Hiroshima. We had a quick breakfast at 7-Eleven near our Airbnb, and decided to take a short stroll towards the Peace Memorial Park. We had to cross this bridge from our Airbnb to get to the park. 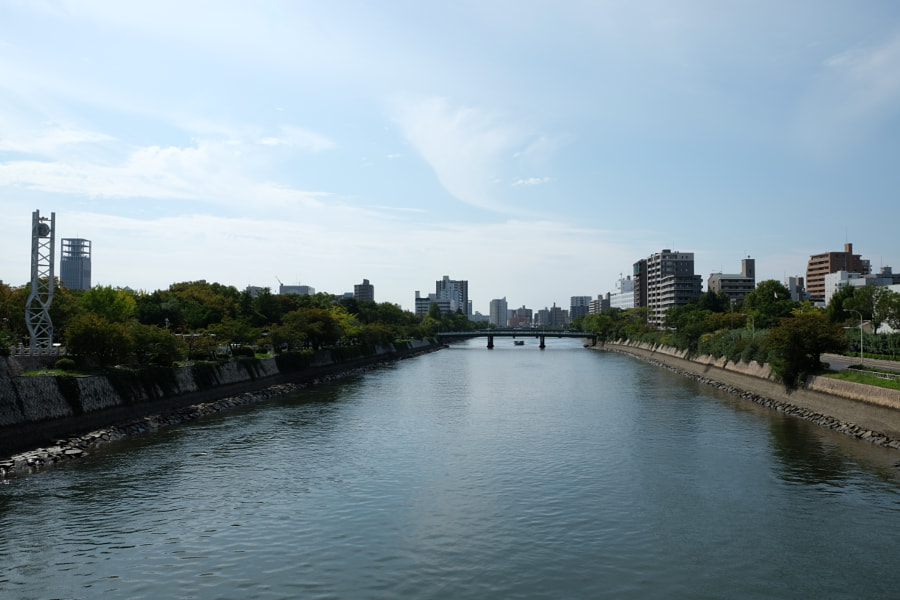 What a beautiful view from the bridge! This the Motoyasu River, which runs next to the A-Bome Dome. 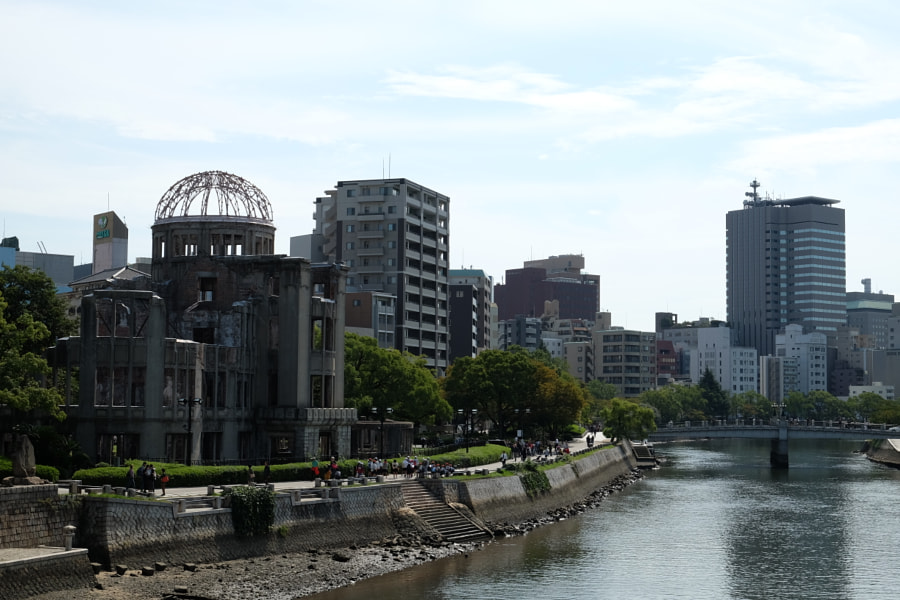 Walking along the bridge, you will see the A-Bomb Dome. 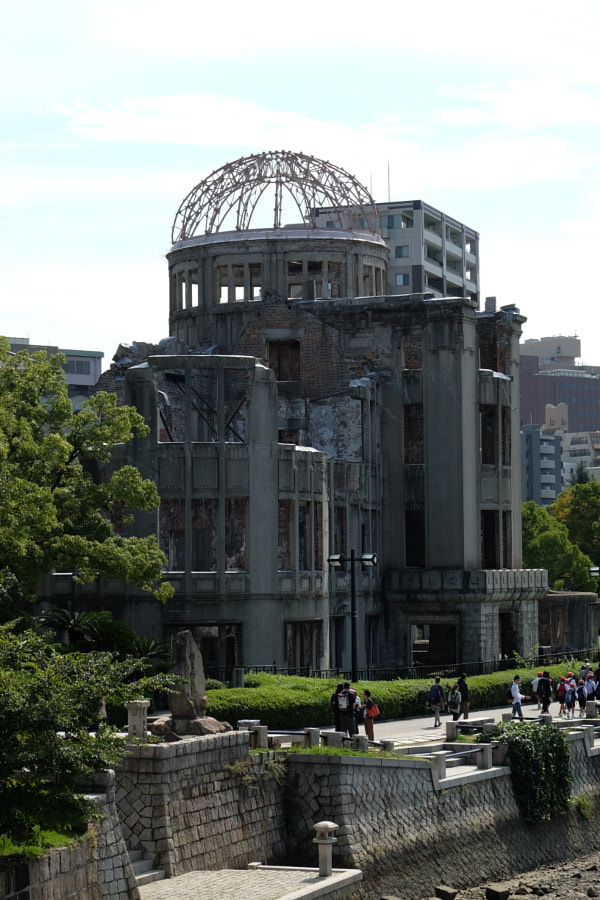 The A-Bomb Dome is what’s left of the Prefectural Industrial Promotion Hall. This building was used to promote Hiroshima’s industries. This is one of the few buildings that is standing today after the bomb. It is now a UNESCO World Heritage Site and is a reminder of the past. 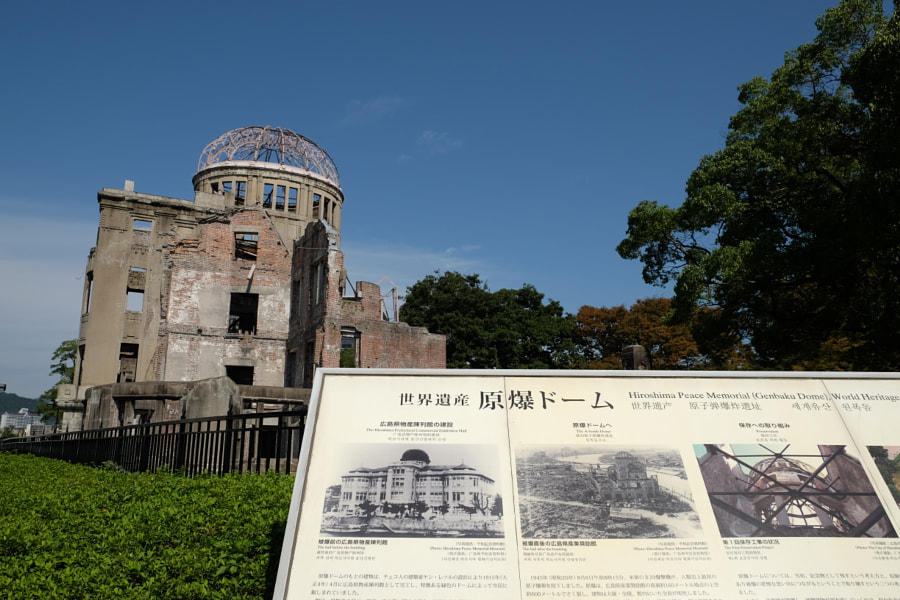 You will find various information boards about the history but what we found the most interesting were the survivors you would find around the dome sharing pictures and stories with tourists. They provide many photographs of what the city looked like before and after, and although we could not understand the stories in Japanese, the pictures provided us with a vivid image of the past. 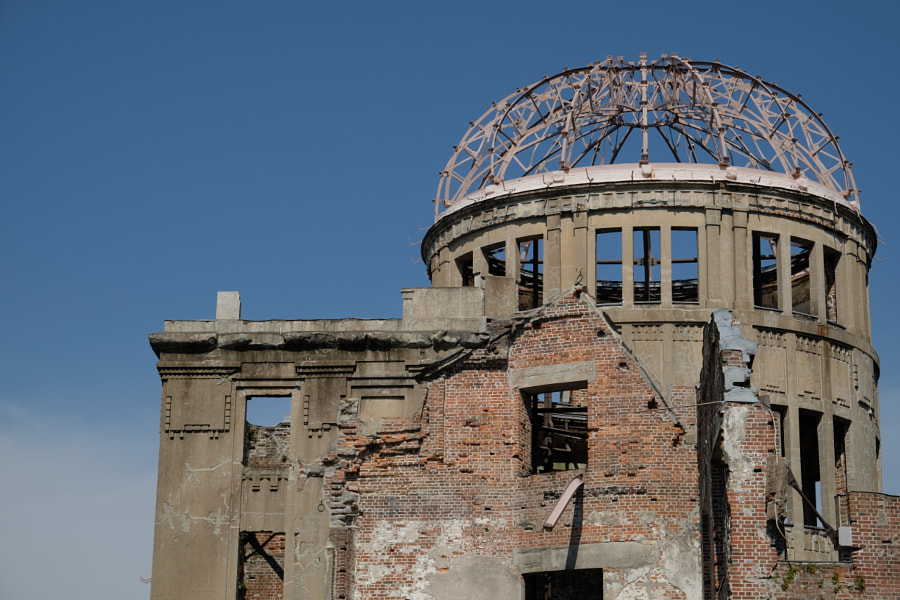 The remains of the past can be seen by locals and tourists alike as they drive along the bridge. To be honest, I find the remains to be rather saddening even though it is a good reminder of the past and what should never be repeated. I can’t imagine and wonder what it is like being a local and seeing this everyday going to work. 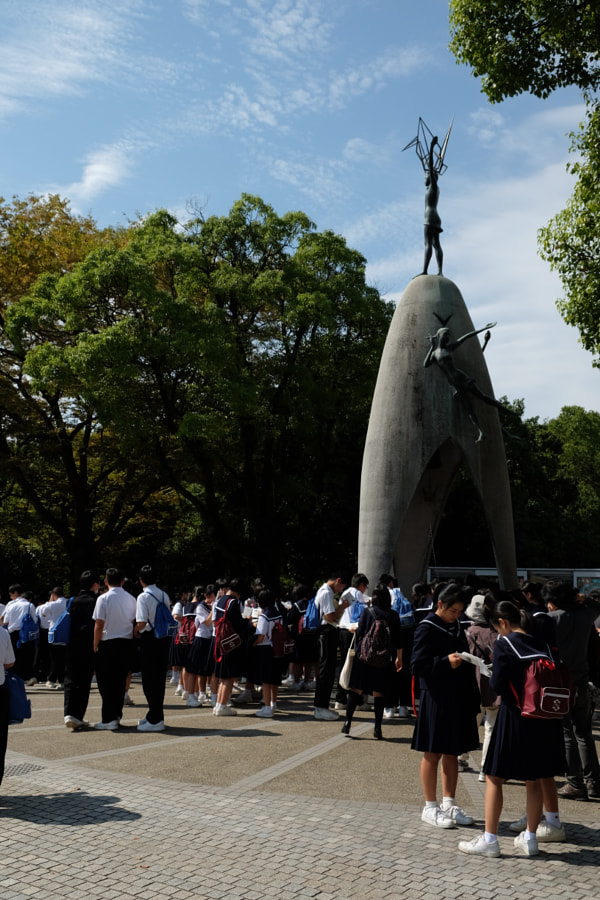 Further past the dome, you will find the Children’s Peace Monument. This monument is to commemorate Sadako Sasaki and thousands of child victims of the atomic bombing in Hiroshima. Sadako was a young girl who died of leukemia from the radiation and is well known as the girl who wanted to fold a thousand cranes. 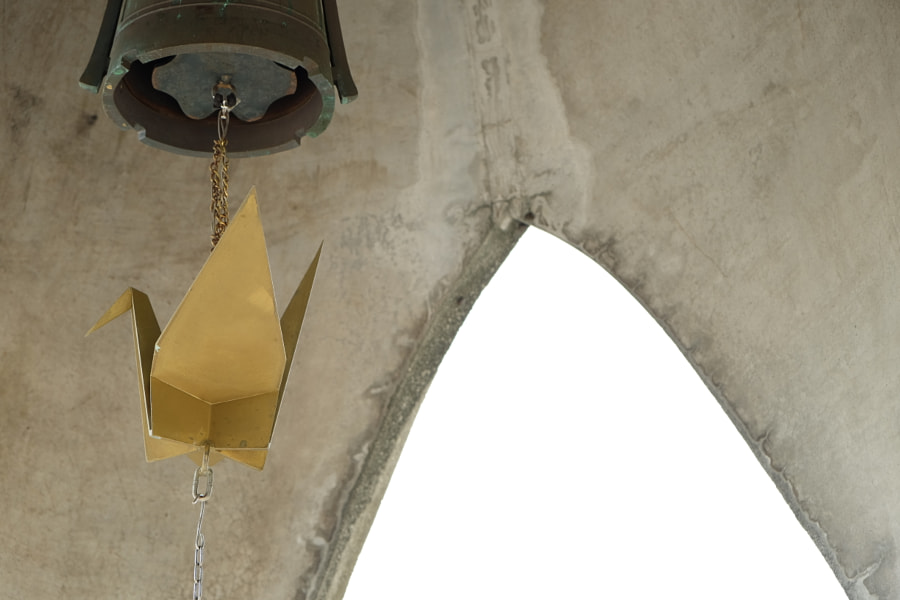 Under the monument, there is a bronze crane that acts as a wind chime. 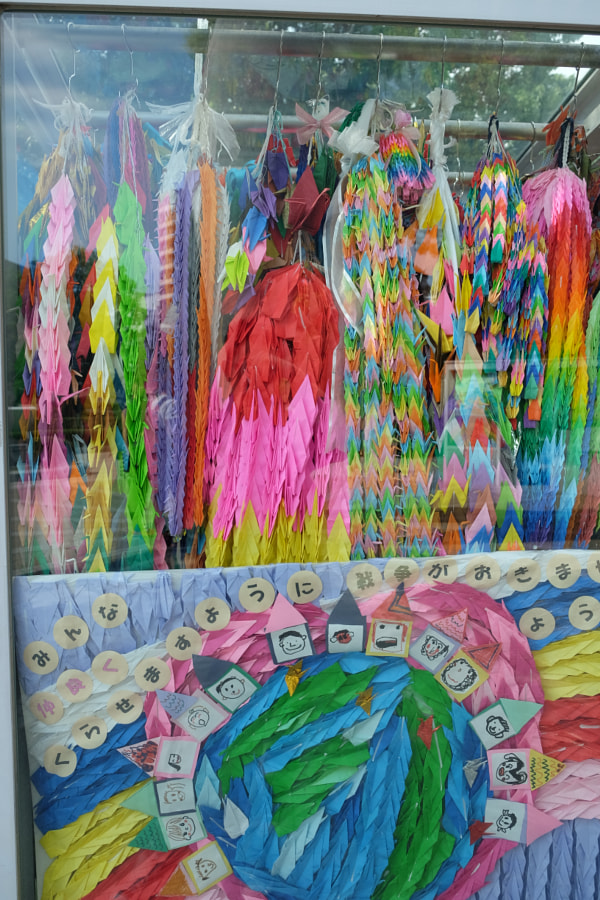 Outside the monument, there are thousands of paper cranes. Sadako’s one wish was to have a world without nuclear weapons. You can learn more about Sadako’s story inside the museum. 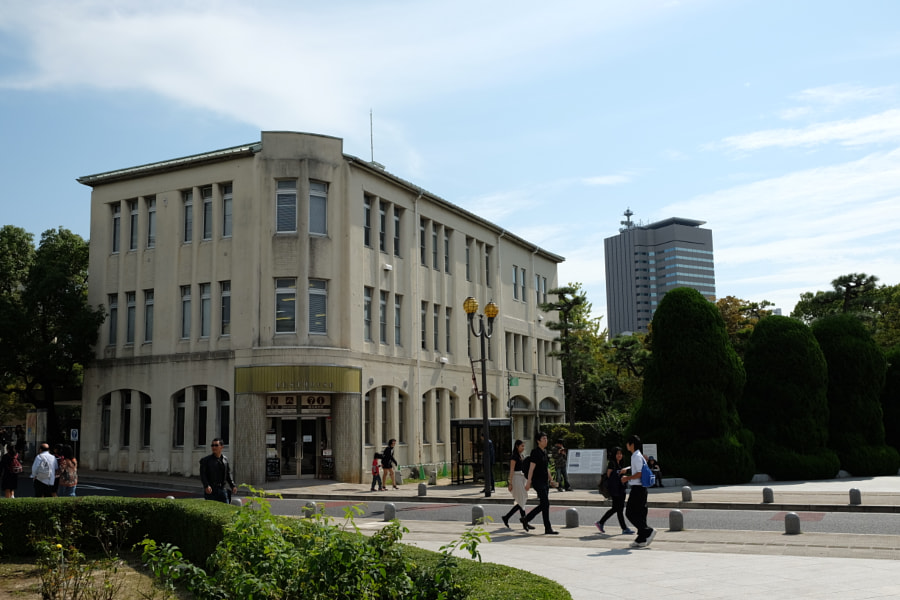 Another bombed building near the park is the Rest House. It was originally a kimono shop, but now acts as a rest house and information center. There was actually a man who survived the bomb in the basement of the building and is the closest survivor to the hypocenter. You can actually make an advanced booking to visit the basement to see the preserved remains. 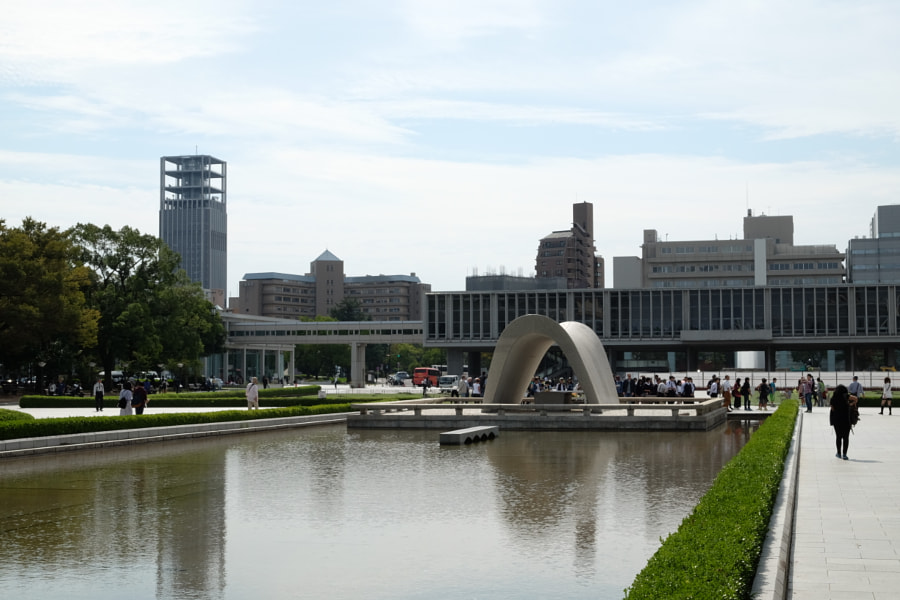 Moving along, you will find the Hiroshima Pond of Peace. Surrounding it is beautiful lush green grass. It really feels peaceful taking a stroll here. 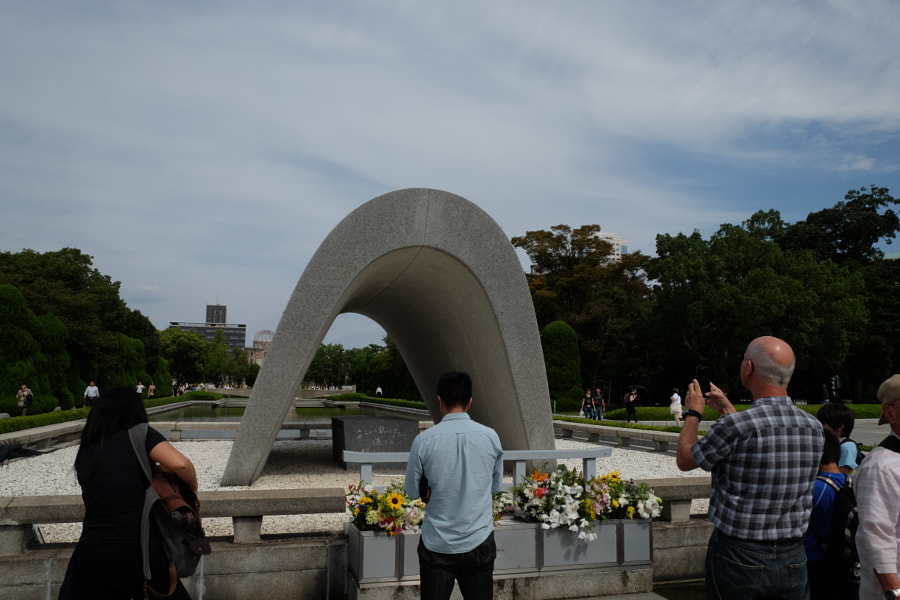 Past the pond is a curved concrete monument that covers a cenotaph. It is aligned to frame the Peace Flame and A-Bomb Dome. It is a memorial with the names of all the people killed by the bomb. 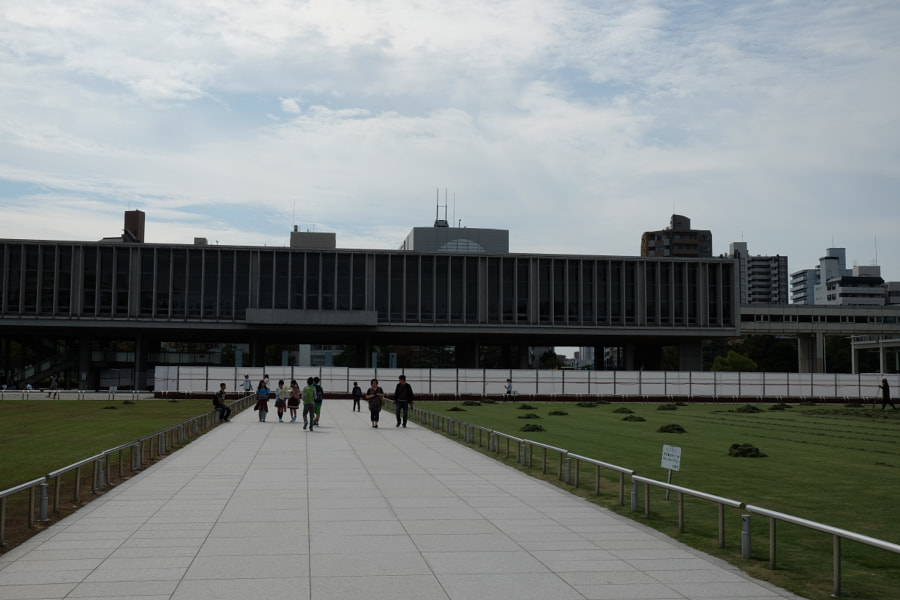 The Hiroshima Peace Memorial Museum is at the end of the park and educates visitors about the atomic bombing in Hiroshima in World War II. Admission to the museum is only 200 yen and very well worth it. 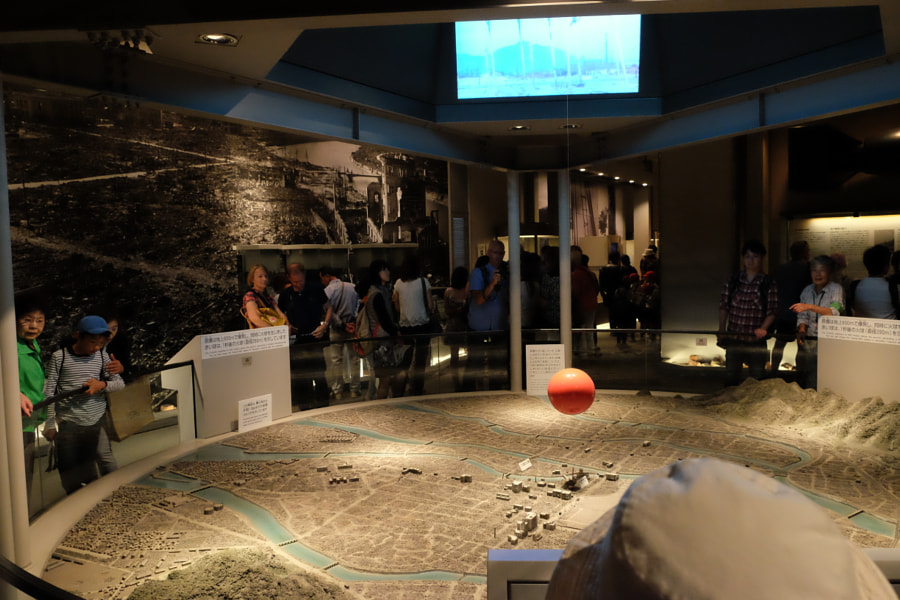 There are two wings in the museum. On one side, it describes Hiroshima before the bomb, the development of the bomb, and why the bomb was dropped. On the other side, it shows the damage of the bomb. 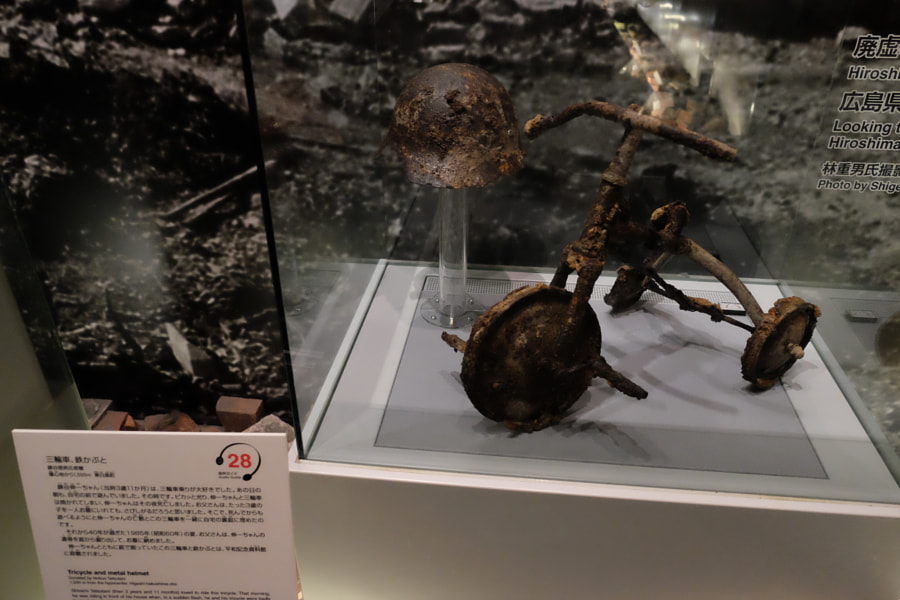 When we went, one side of the museum was under construction, so we only got to visit the side which showed the remains of the bomb. We saw many remains of clothing, watches, and personal items like bikes that were left after the radiation. Many of the displays are quite upsetting and remind us not to take peace for granted. I think we ended up spending around two hours in the museum. There is lots to see and each display has both Japanese and English captions. There are lots to learn and it was the highlight of our trip in Hiroshima. Inside the building, you will be able to get a view of the park as well. 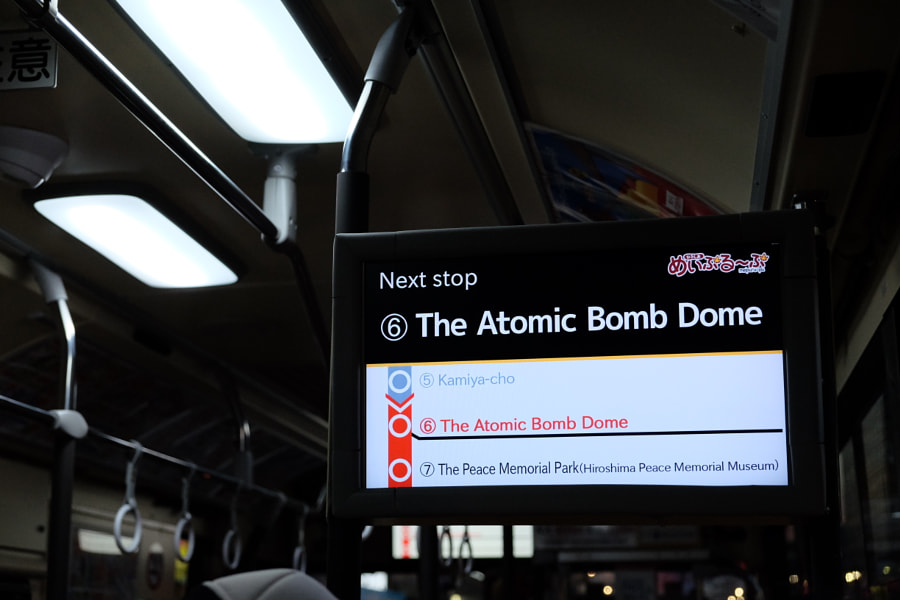 After visiting the museum, we decided to get on the Maple-oop which is a JR operated loop bus for tourists. This is perfect for those who have the JR Rail Pass, because getting on these buses are free and they stop at most of the tourist attractions. If you do not have the pass, you can pay 200 yen per ride or 400 yen for a 1-day pass. We found this very useful as there is English on the bus, and was a great way to sight see the whole city. Just note that the last bus is roughly before 6pm, so you will need to find alternate modes of transportation after. 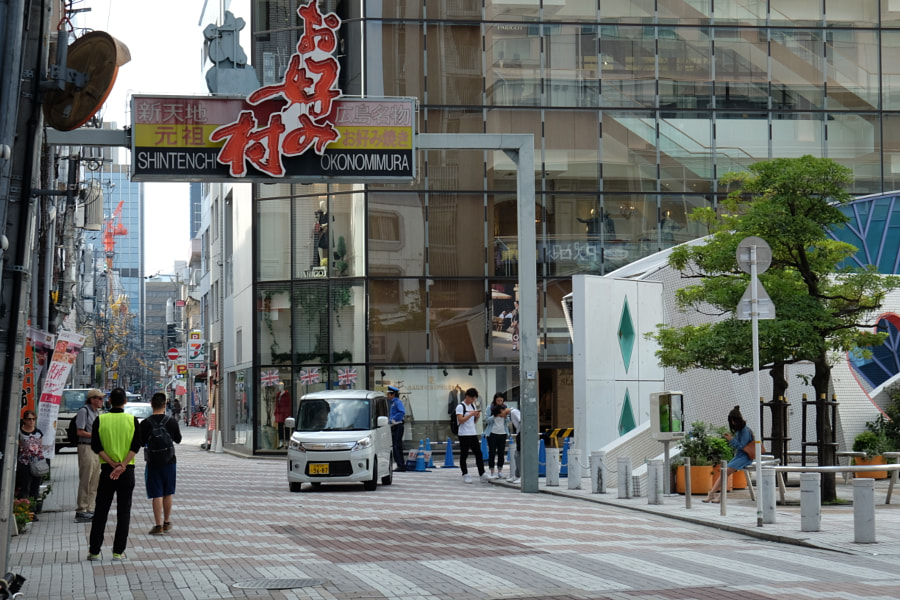 One of the stops on this bus included Okonomimura. If you get off at the Namiki Hondori stop, you will find Okonomimura a 2 minute walk away. This building has 24 okonomiyaki stores throughout its four floors! It was quite overwhelming and it took us a while to decide on which restaurant to eat at. 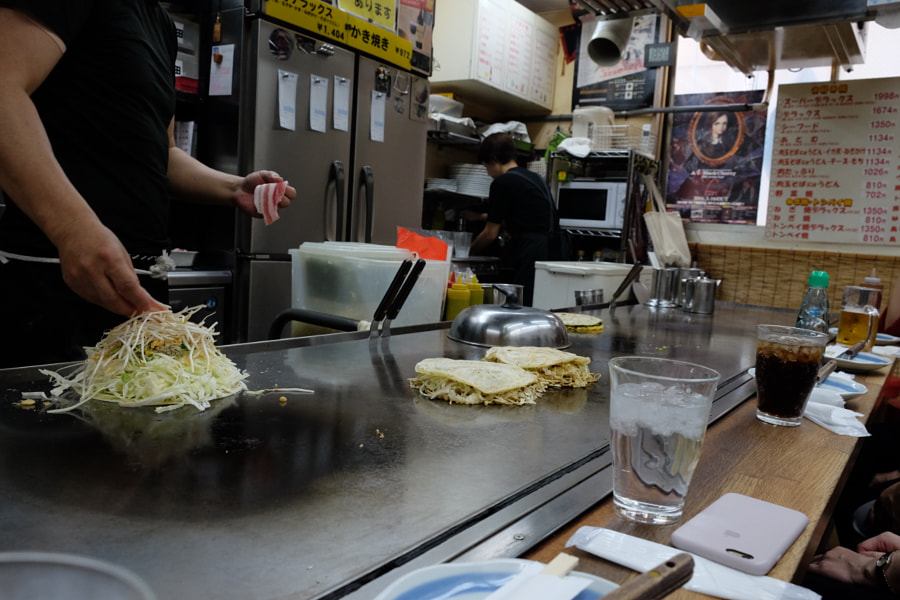 We ended up at restaurant that featured oysters in their okonomiyaki as I hear that is a must try in Hiroshima. I really liked how you could watch the okonomiyaki being made in front of you. Our okonomiyaki was definitely picture worthy! We got one with pork inside and topped with tons of green onions, oysters, and a sunny side egg. Amazing! However, I personally still prefer the Osaka-style okonomiyaki where all the ingredients are mixed together. I find that the Hiroshima style has way too much cabbage and the ingredients fall apart a lot easier. But still, this was delicious! 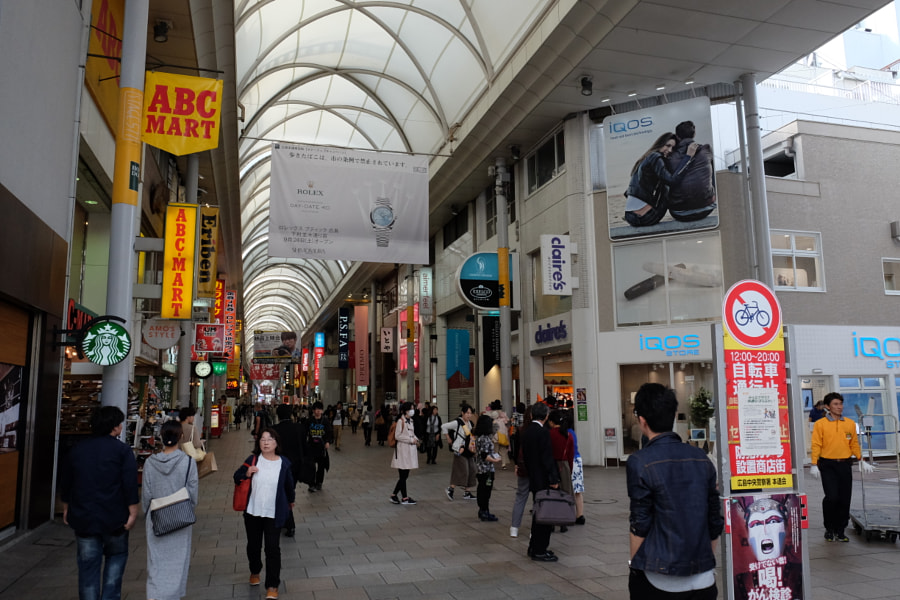 After a late lunch, we headed to Hondori Street which is located in the downtown area of Hiroshima. This is just like any other Japanese city, where the shopping area is pedestrian only with a covered arcade. Since we had been in japan for over two weeks now, many of the shops were similar and we didn’t find anything too interesting. We also noticed that the downtown of Hiroshima was way less busy than the other cities we had visited. I guess this can be a relief for some who dislike the crowds. 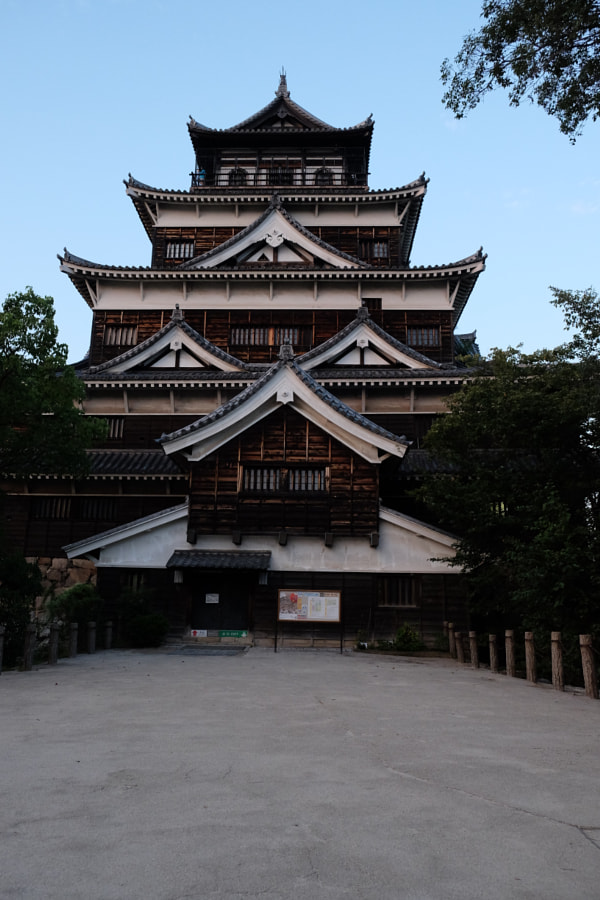 After some shopping, I suggested we visit the Hiroshima Castle ((広島城), since it is a stop on the JR sightseeing bus loop. Like most buildings, the oriignal Hiroshima Castle was destroyed during the atomic bomb. This was rebuilt with concrete and a wooden exterior. There is a museum inside providing information about Hiroshima’s history as well as Japanese castles. Entry is 370 yen, but we found the information to be just average. We personally aren’t interested in castles though. 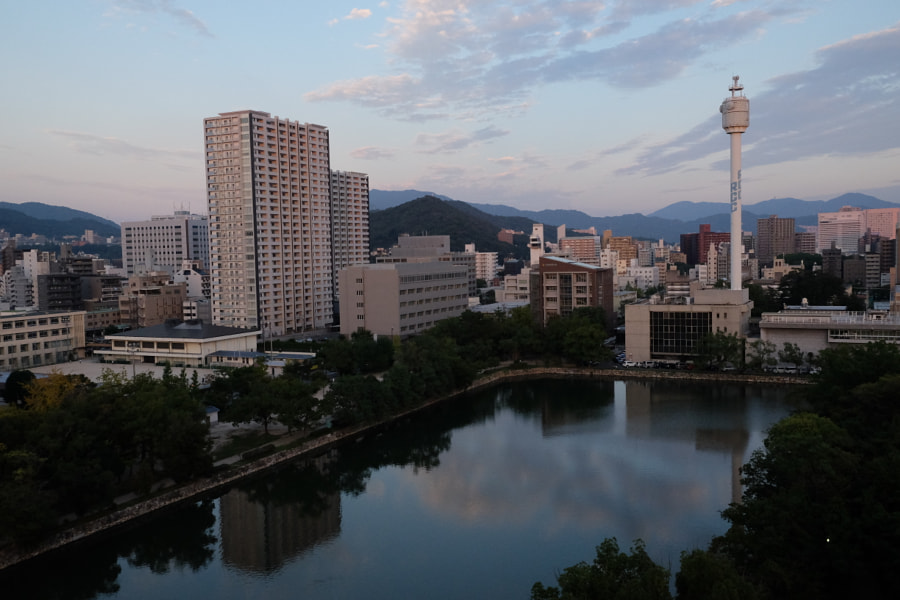 I guess what we enjoyed the most about the castle was that on the 4th floor, you can enjoy stunning views of Hiroshima city. 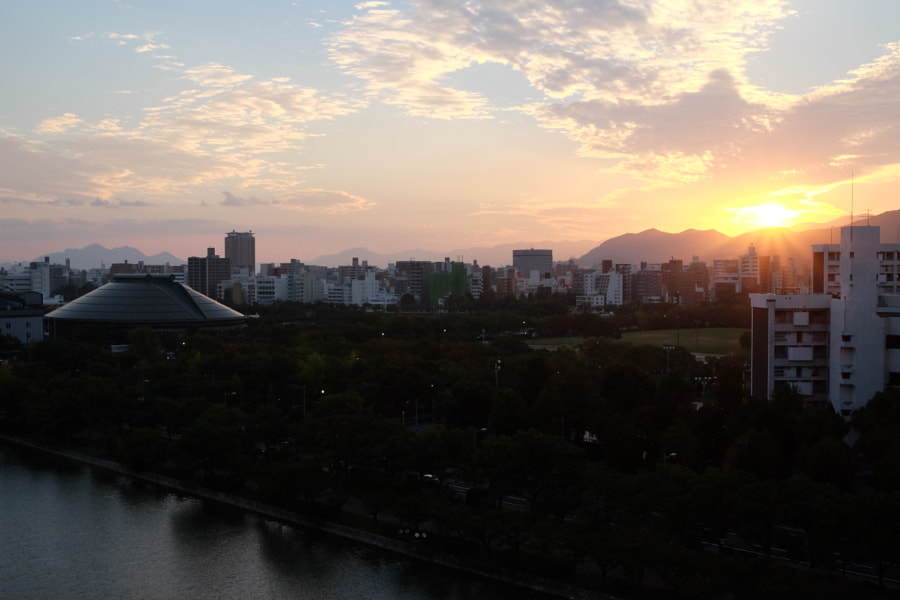 We even got to catch sunset here! If you are looking for an observation deck in Hiroshima, then the castle isn’t a shabby one. 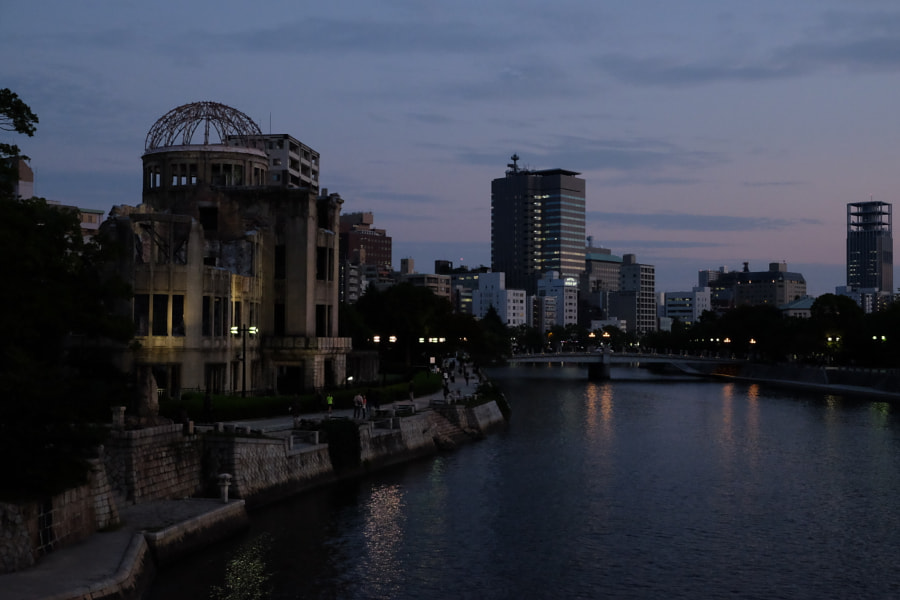 As the evening arrived, we found the city to be rather quiet contrary to the bustling cities of Tokyo and Osaka. The city was dim and quiet, with many shops closing rather early. We decided to head back to our Airbnb and get some rest as we would have a full day of traveling back to Narita (which would take almost 6 hours) as we caught our flight back to Vancouver. Ending our trip in Hiroshima was perhaps a good way to end our trip as it was rather slow paced which paired perfectly with our tired legs. It was also a good reminder to not take things for granted in this world we live in.

And this concludes our travels in Japan! Hope you enjoyed our travels and found some useful information here! Feel free to email me or comment below if you have any other questions. Until next time, Japan!