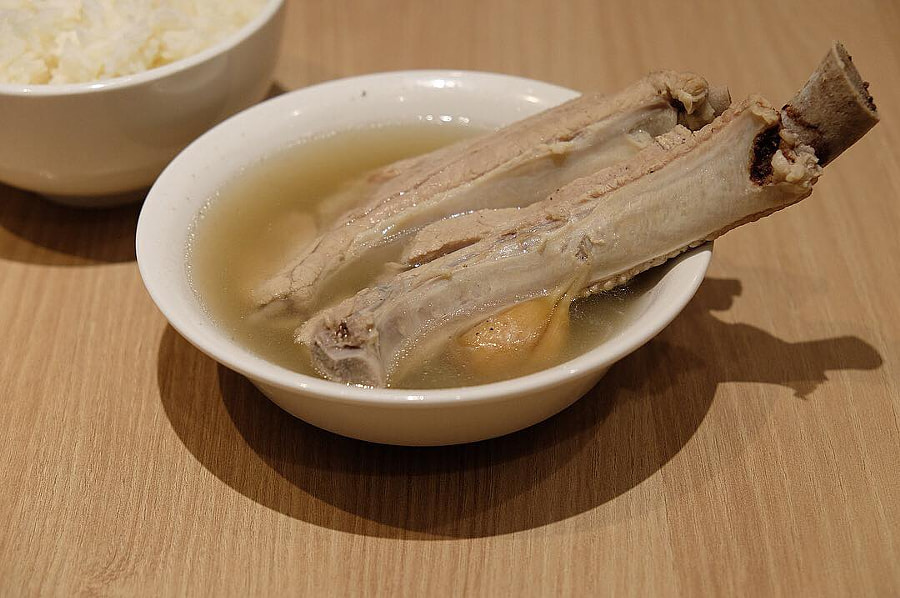 The main reason for visiting Singapore this time around was because S wanted to watch the Singapore Grand Prix Formula 1 race. The race itself doesn’t usually start until night time although there are some other non-Formula 1 races going on in the afternoon. Therefore, we made sure to grab some lunch before heading to see the afternoon races. We decided to go to a nearby shopping mall, Raffles City Shopping Centre and found Ya Hua Bak Kut Teh 亞華肉骨茶. They are known for their bak kut teh. I decided to go with the Prime Rib Cuts and you get a bowl of tea with two large prime ribs and a bowl of rice. The tea is refillable and they will come around to ask if you want more.The prime ribs were very tender and the meat fell off the bone. The tea itself was peppery which I quite enjoyed. 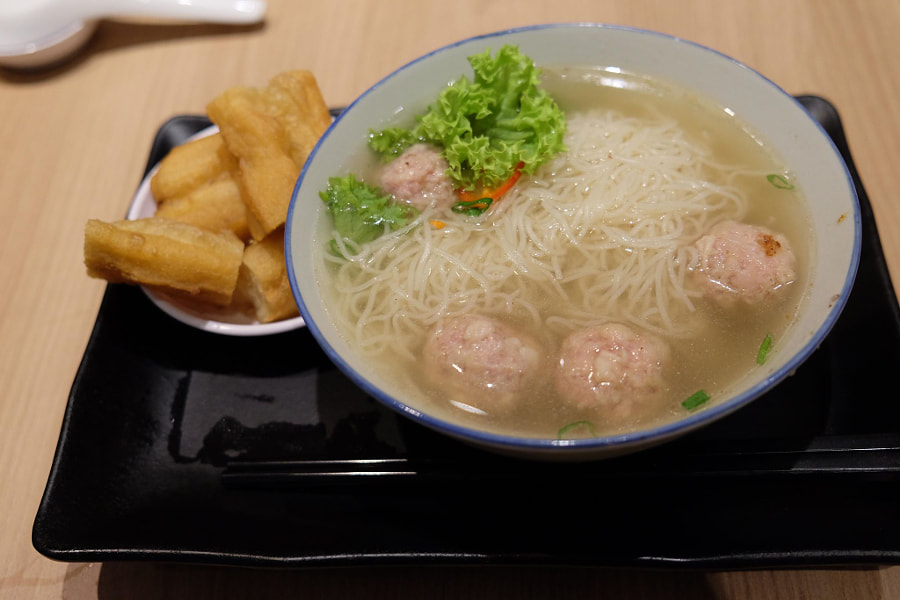 S wasn’t really feeling bak kut teh so he chose to get the Mee Hua Soup with Minced Pork Balls and this was served with you tiao or Chinese donuts. The good thing about this restaurant is they serve other dishes other than bak kut teh. Nothing too special about this Mee Hua though, and it was a bit small for the price. Be warned that the prices here are slightly higher as it’s a full service restaurant in the mall. It also charges for the use of the wet wipes, so don’t use them if you have your own and remember to check your receipt. 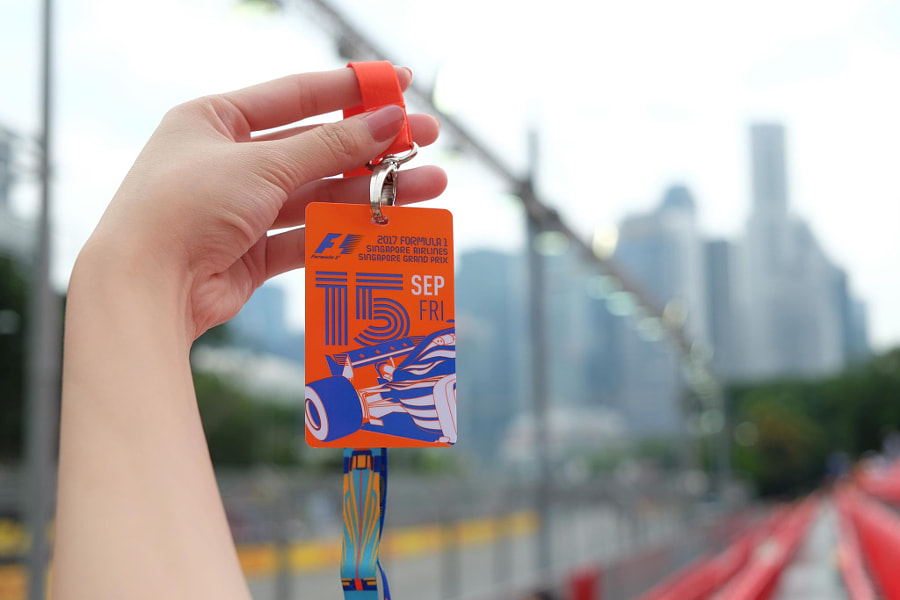 After lunch, we decided to head over to the F1 race to check out the area and see where our seats were. The Singapore race is typically in September and the 3 day event is from Friday to Sunday. However, the final race is on Sunday and you can choose to only purchase single day tickets. S is a huge fan so we got the 3 day grandstand package. S chose to purchase the Stamford Grandstand which has a view of Turn 7 which comes just after the racers go at their highest speed. If you are able to take advantage of the early bird price, you can get these tickets at $448 SGD (regular price at $498 SGD). Given the amount of entertainment and concerts the Singapore Grand Prix offers, it isn’t too bad of a deal. 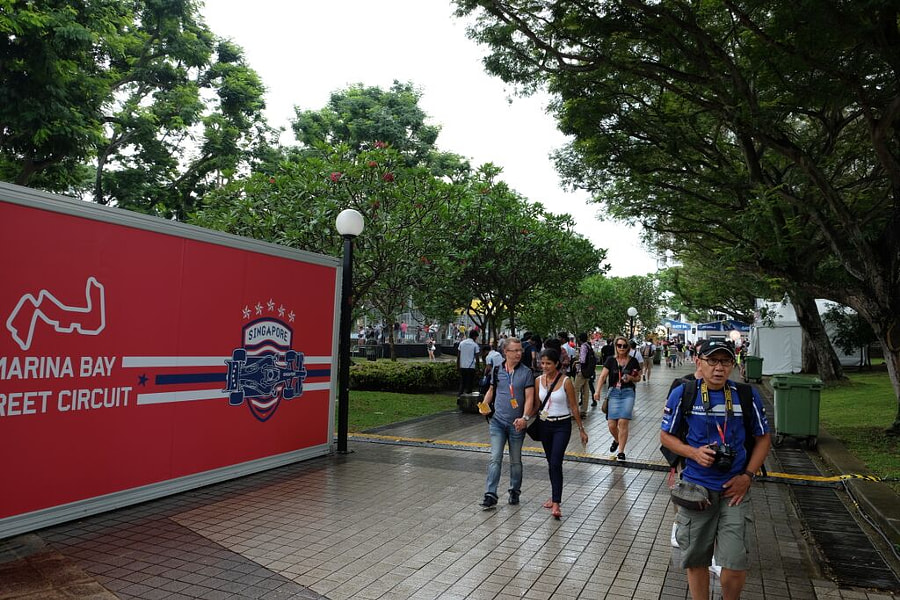 The nice thing about the Stamford Grandstand is it’s close to the Raffles City Shopping Centre and Suntec City Shopping Centre. Given it’s still burning hot and humid in September, you’re likely going to want to head into a shopping mall for some air conditioning during the breaks. It was also good for our year when it decided to rain a lot. 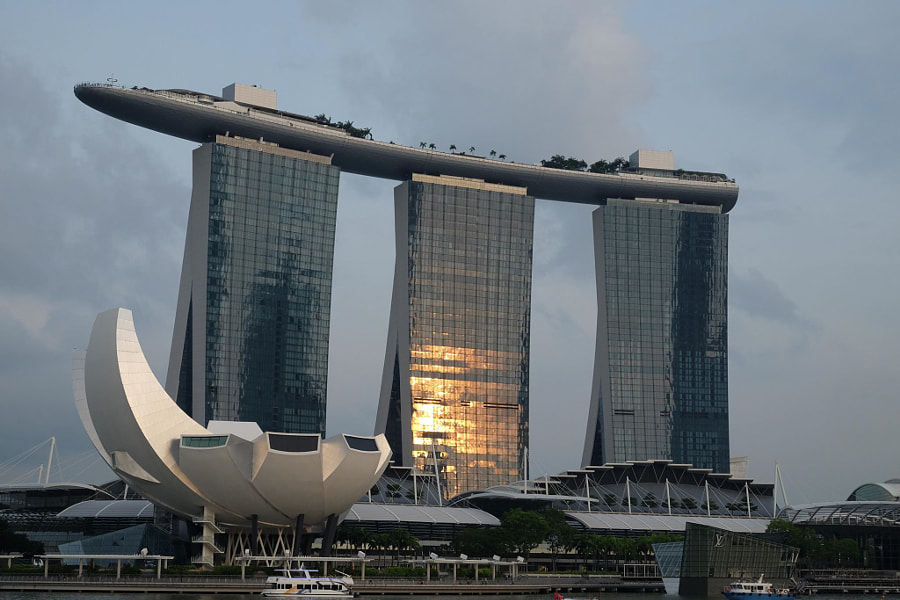 The entire vicinity is actually really easy to access as well. There are tons of volunteers around the area to direct you and answer your questions, but the map they give you is also really easy to follow. During our breaks, we would walk around the area to check out other entertainment which is laid out across the track. The best part about the Singapore race is that it’s a night street race. The track is in the middle of the city centre, so you can check out all the tourist attractions during the day. We were able to get some great shots of the Marina Bay Sands as one of the grandstands is nearby. 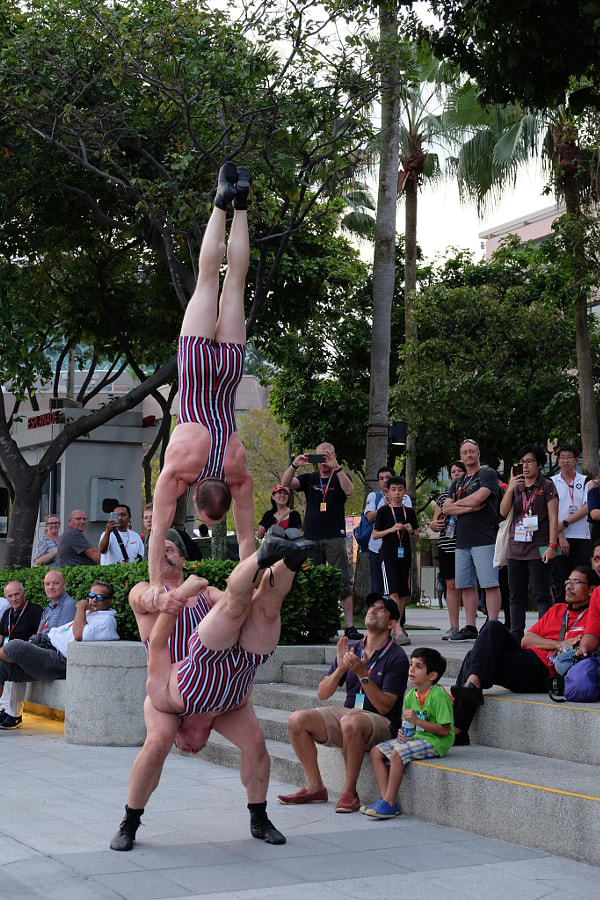 Throughout the afternoon, there are also roving acts which are entertainers that move around. They are stationed at different areas at different times so be sure to check the schedule to see which acts you want to see and plan accordingly. A great act we had during the 2017 race was the Acro-Chaps. They are acrobats with mustaches and they can do some crazy moves! I love how they also try to incorporate the crowds into their acts! 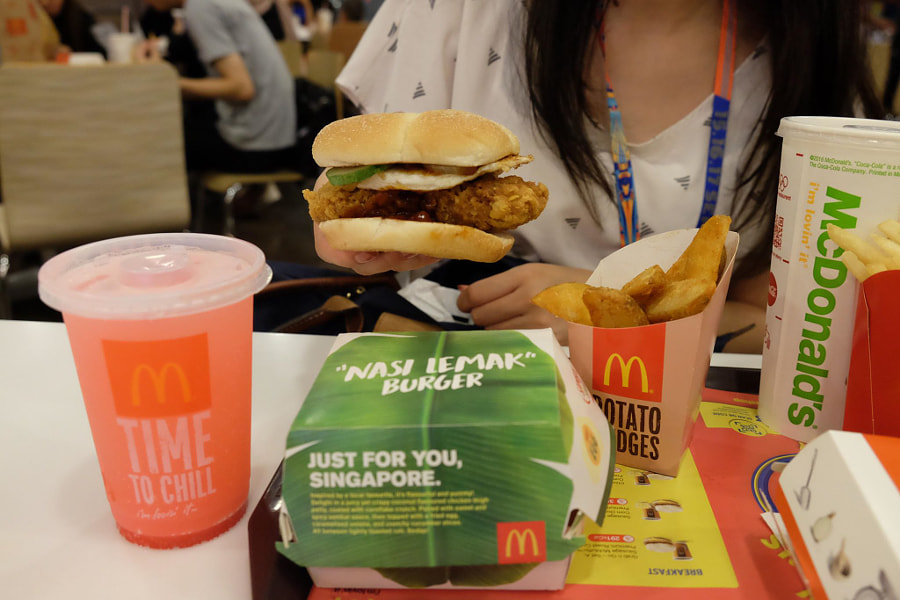 Dining at the venue is not cheap but because the venue is in the city centre, it’s easy to step out to go to a shopping mall or nearby restaurant to grab some food. For dinner, we decided to head to the Shoppes at Marina Bay Sands and check out McDonalds! Yes, I love to check out McDonalds when I travel as there are often menu items you won’t find in Canada. During our time in Singapore, they had the the Nasi Lemak Burger which was available for a limited time. We got the whole limited edition meal which also came with Potato Wedges and Bandung McFizz. The Bandung McFizz is a fizzy rose syrup drink and was great to quench the spice, but I personally wouldn’t get it again. It tasted like a syrupy soda. 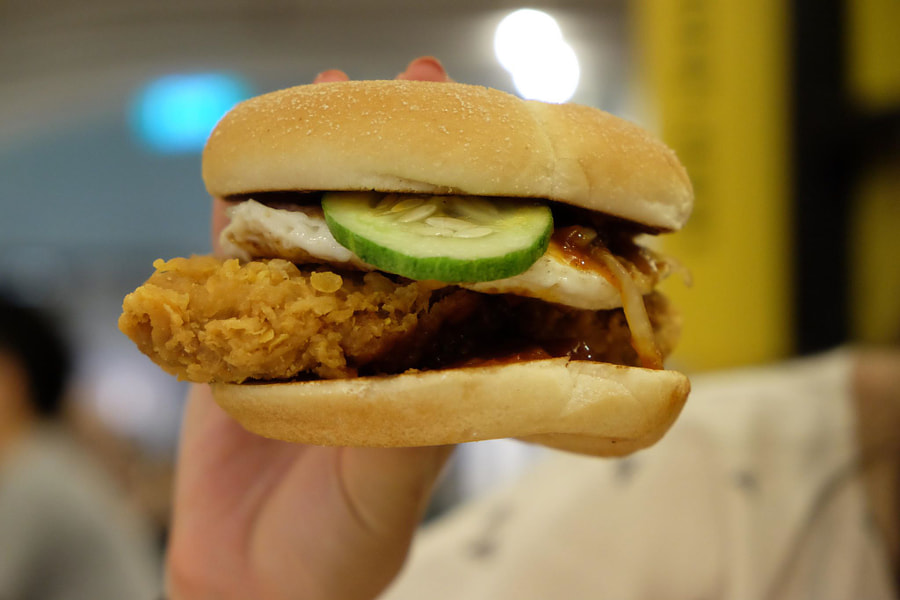 The star of the show was definitely the Nasi Lemak Burger though. The coconut flavoured chicken is juicy and crispy and coated with a cornflakes for a nice crunch. It’s paired with a sweet, spicy sambal sauce and topped with a fried egg, caramelized onions and crunchy cucumber slices. It really did taste like eating nasi lemak! And the crispy chicken was absolutely delicious. If you like spicy chicken, you’ll enjoy this! 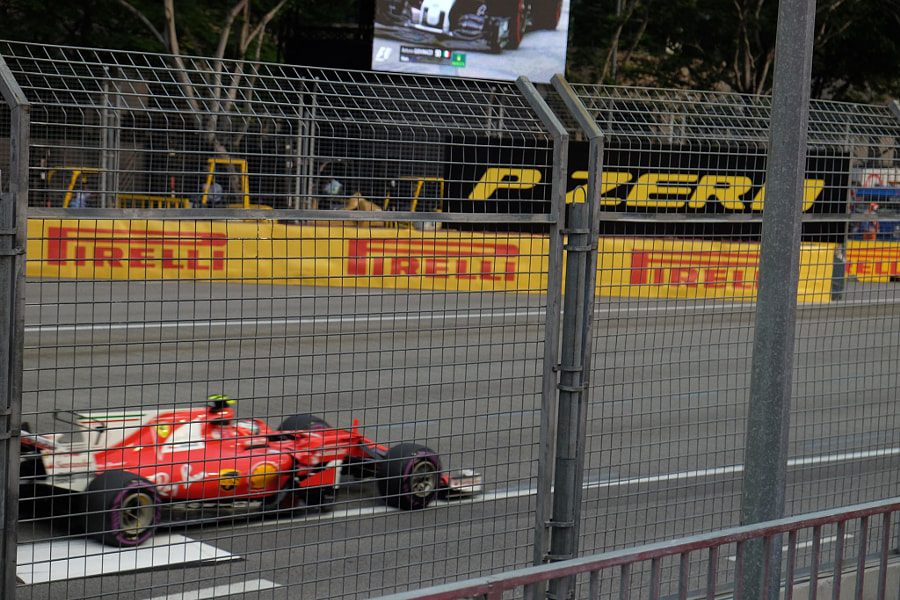 The first night is for practice so this is the time when the racers can test out the track and get ready for the next two days. This was the view we had from the Stamford Grandstand. To our left is turn 7 where you’ll see the curve and cars coming out and then to our right is a short straight. At our stand, you can also see the live TV broadcasting the cars. 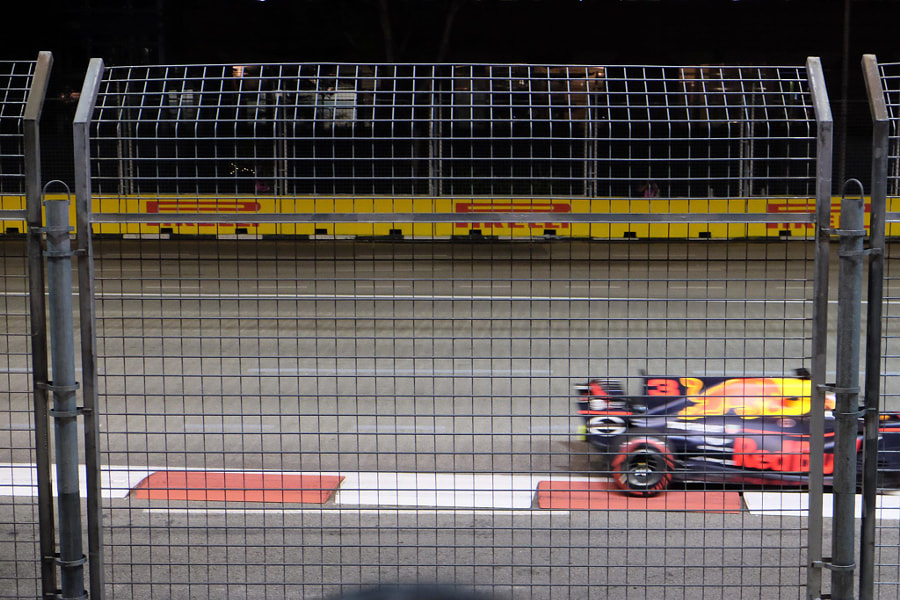 The night race is definitely a cool experience but keep in mind that it’s a bit more difficult to take pictures, especially since the cars are already moving at high speed. Be sure to bring your best camera if you’re planning on taking some high quality pictures! 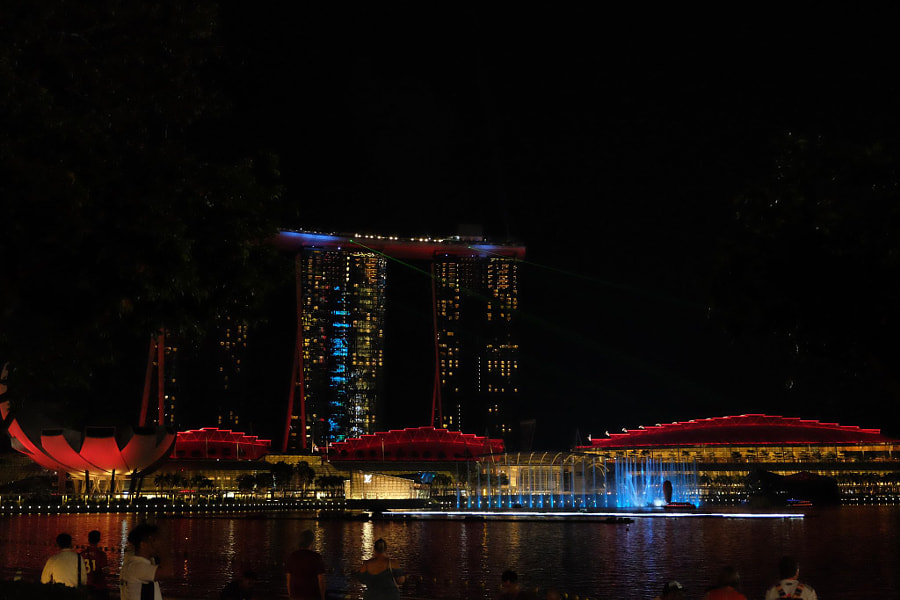 At night time, you can also enjoy the beautiful night views of Singapore. I loved how the lights changed compared to usual. The red and blue lights were really spectacular! 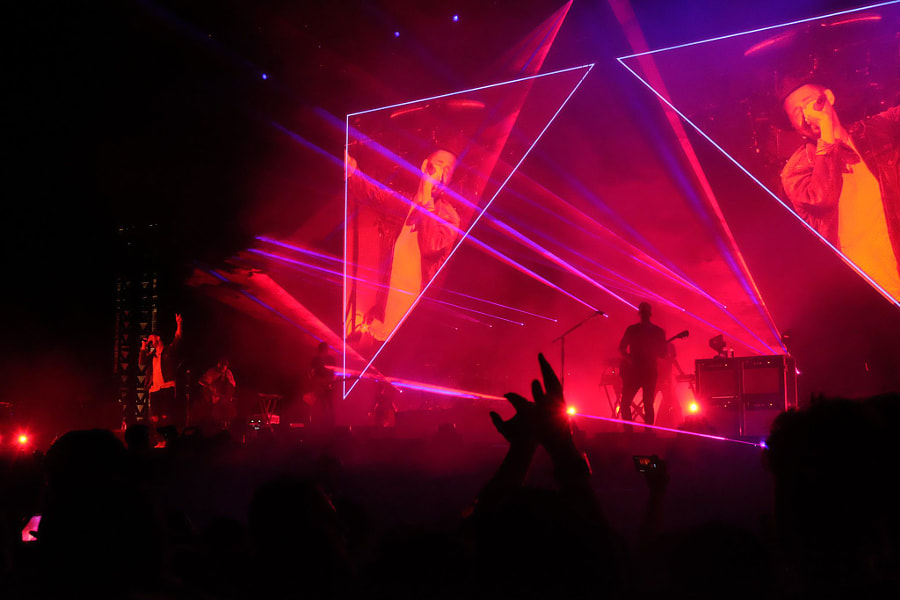 Each night, there is also a huge headliner concert to enjoy. This will usually begin just after the last race. The 2017 year had some top headliners including Calvin Harris, The Chainsmokers, Arriana Grande, and One Republic. The Singapore Grand Prix really knows who to invite for entertainment! Even for myself who is not a huge fan of the race, there was plenty to do and the ticket price was well worth the concerts I got to attend. Of course, if you are not a huge fan, I would suggest getting the walk-about tickets so you can just quickly check out the race and then head to the concerts. However, I wouldn’t suggest spending the whole day there as you’ll likely be tired and sunburned without a seat. The price is roughly $100 less than getting a seat. On the first night, we enjoyed One Republic! 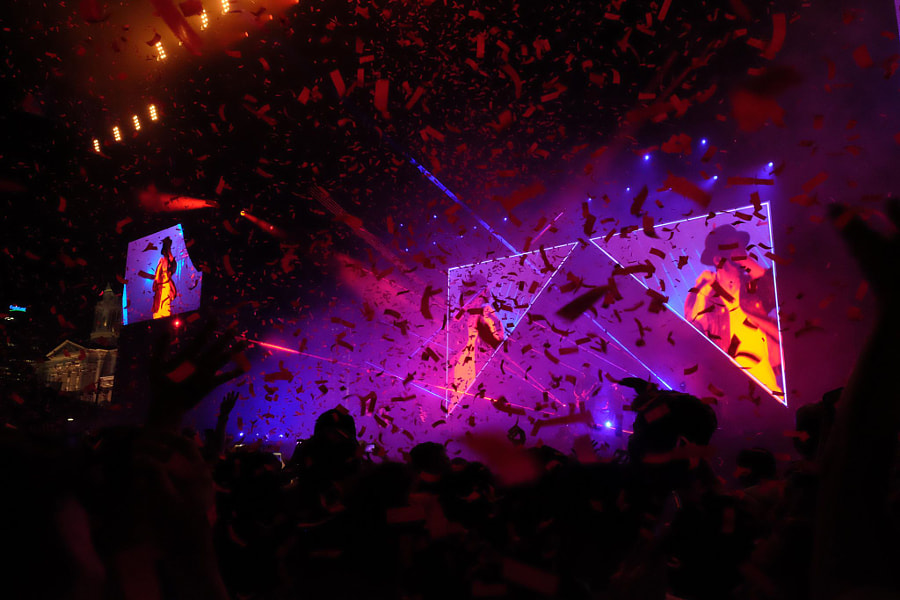 If you are a huge fan, I suggest arriving early as fans are already sitting on the grass an hour in advance to be as close to the singers as possible. 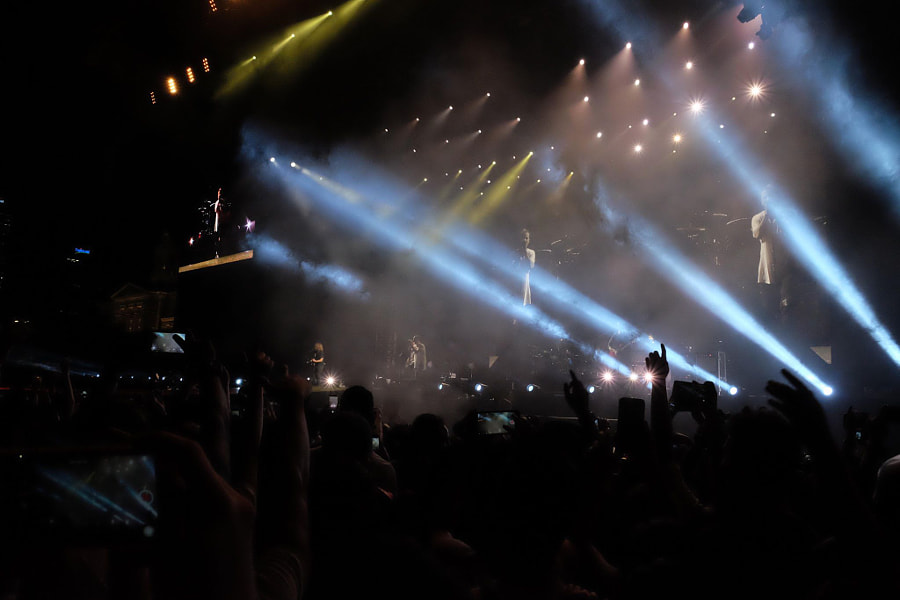 However, remember that the concert is outdoor and Singapore is still hot and humid even in the evenings. We had never had such a sweaty concert before! It was not very enjoyable to be honest because we were standing shoulder to shoulder with people and everyone was sweating! 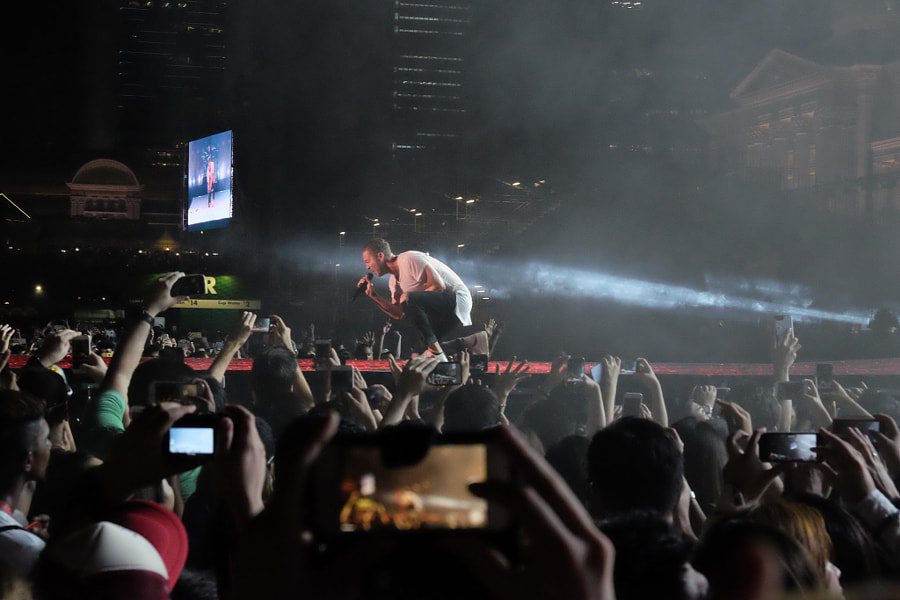 But arriving early to secure a spot did mean we could get close up shots of the singer! If you’re not a diehard fan, then I suggest just standing in the back as there are two large screens broadcasting live anyways. Plus, the music is booming up front and almost too loud. 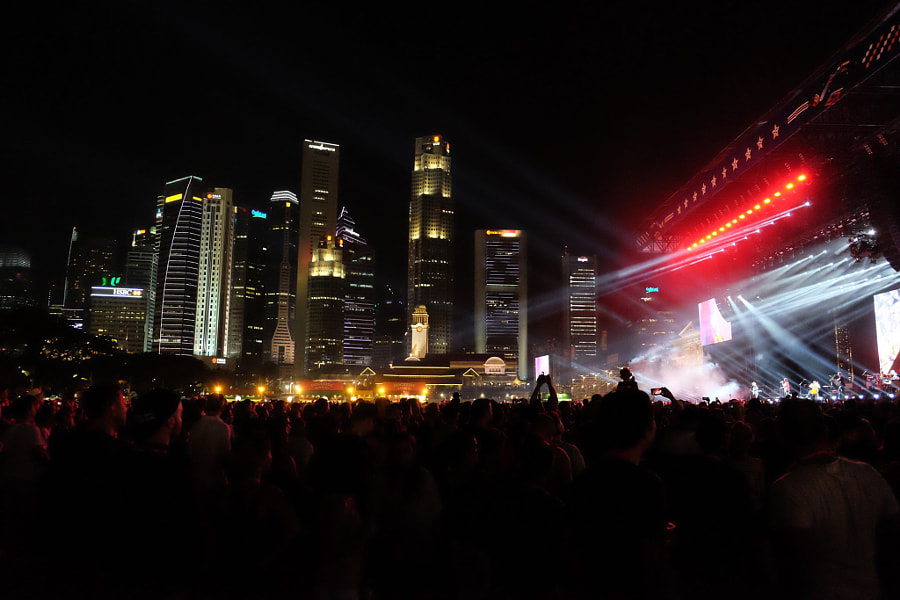 I think the coolest part about the live concerts in Singapore is the skyline you get in the background. Super cool to see all the buildings lit up just off to the side! Anyways, we rushed out just before the concert ended in order to avoid line ups exiting and to get on the Metro quickly. Day 1 of Singapore’s Formula 1 done!