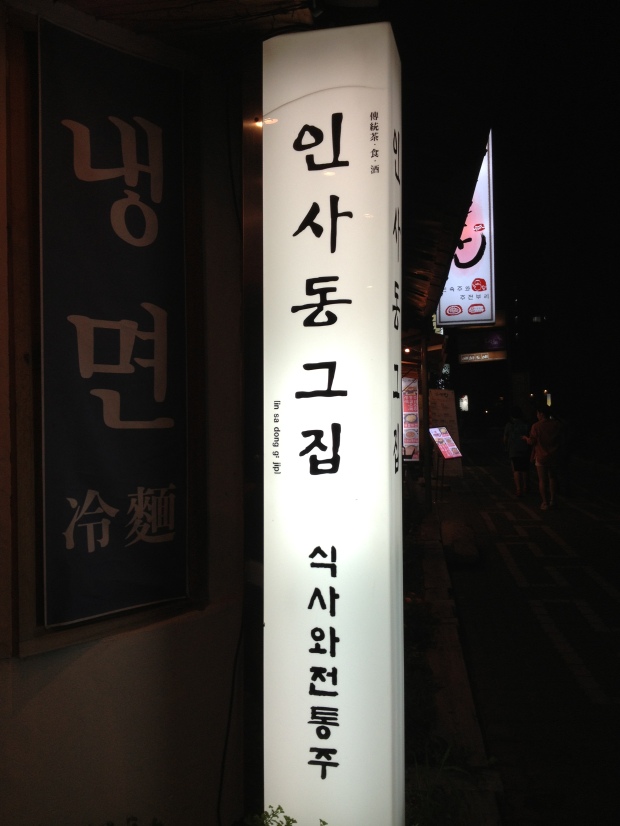 After a day of exploring the Insadong area, we began to look for food. There’s so many restaurants on the main street and we came across Insadong Geujip. It had a huge line up, but surprisingly, when we asked for a table of 4, we were able to get a seat immediately. The restaurant is huge! He took us behind the kitchen and there were more rooms set up which gave you some privacy. The restaurant is in a traditional hanok house, so it’s pretty neat!

First, we were presented with the complimentary appetizers. There was cold tofu with a spicy sauce, marinated radish, mayonnaise salad, kimchi, and seaweed soup. K’s favourite was the cold tofu as usual. It has no flavour on its own, but is delicious with some spicy sauce. My favourite was actually the marinated radish. I don’t normally like radish, but it was the spicy pickled flavour that I enjoyed. It also had a great crunch to it!

We decided to share three dishes between the four of us since we weren’t very hungry. First, we got the Nakji Dolsop Bibimbap. It was our first bibimbap in Korea, and it definitely didn’t disappoint us. Mixed with beansprouts, zuchhinis, cloud ear fungus, carrots and seaweed, it gave you a crunchy texture and bursts of flavours. Instead of the typical egg yolk that they normally use, there was octopus in it! Tiny baby tako which were marinated in a spicy sauce. Super tender and flavourful. We much preferred this bibimbap compared to the ones we just plain old veggies!

Next, we had the Doenjang-jjigae, which is a soybean paste stew. It’s a bit different from the typical tofu soup, because you can really taste the soybean. It’s pretty much like miso soup with tofu in it. The soybean flavour was very rich and strong. A very small hint of spice as well, but I was addicted to this!

Last but not least, we had Gungjung Tteokbokki, which can be translated to the Royal Palace Rice Cake. We had plenty of spicy rice cake, so we decided to go for the non-spicy version. Filled with marinated bulgogi (beef), carrots, mushrooms, chestnuts and a sprinkle of sesame, it was absolutely delicious! The rice cakes were super soft but still remained the chewiness. The sauce was sweet and not overly salty. We definitely agreed this was our favourite dish!

I’d definitely recommend checking Insadong Geujip out if you’re in the Insadong area. Prices are fair and service was pretty quick. Best of all, the food is delicious!

I actually discovered Haroo on Urbanspoon while looking for a Korean place to eat with a friend in Richmond. Finally ended up going, and the place is so cute! It gives you the feeling like you walked into a Korean family’s house. Super homey and comfy! The man who served us, whom I’m guessing is the owner, was so sweet and friendly too. Reminded me of those Korean dads on Korean dramas! Parking at the mall is terrible though, even though it was just a weekday.

But anyways, let’s talk about the food. We ordered the Lunch Sets, since that was really what was only offered during lunch time I think. I found that the food actually tasted quite differently from the dishes I’ve had at places such as Jang Mo Jib and Kyung Bok Palace. The kimchi was slightly more spicy with a different seasoning, and the rice cakes were cooked quite differently. The Rice Cakes weren’t in a spicy sauce, but rather a beef stew type of sauce. I had the Bulgogi Soup which had some potato noodles, beef, veggies and a very sweet and delicious soup. For $10, each dish was in a smaller portion, but everything together made it a filling meal. I didn’t find that the food was anything special or extra delicious in any way though, but I really did like the service and the atmosphere. It felt like home and was a great place to chat with friends.