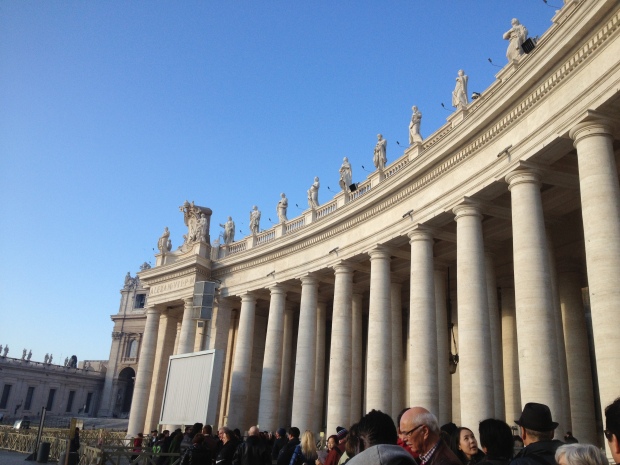 Day three in Italy was a trip to Vatican City. I’ve been here as well, and my deepest memory is losing one of our classmates in this busy square. Luckily, we found her somehow. Anyways, this time I understood so much more about the history again. I guess things just make more sense when you’re older. Vatican City is actually the smallest independent state in the world in area and population size. A size of around 44 hectares and a population of 840! The State is basically ruled by the Bishop of Rome or the Pope. First stop was St. Peter’s Basilica, which does not require admission fees. However, you do need to line up, but it moved quite quickly for us.

St. Peter’s Basilica is located at St. Peter’s Square. It’s a Late Renaissance Catholic church and was designed by architects including Michelangelo. It is one of the largest churches in the world and is known to be one of the holiest and greatest churches in the Christian world. I’m an atheist, so visiting these churches isn’t really my thing, but I think it’s worthwhile to just see the architecture here. It’s seriously magnificent..

Here is the altar of the basilica, and Saint Peter’s tomb lies just below the altar. You’ll also be able to see the dome of St. Peter’s and it’s the tallest dome in the world.

Then, we took a short walk over to the Vatican Museums. You need to pay for this museum, but you’ll see some incredible work in here. You’ll find Renaissance sculptures, paintings, and other artwork here. For instance, here is just part of the ceiling. If I remember correctly, this ceiling is completely flat, but the artist painted it so you feel like it’s 3D and sculpted. Seriously, how do people even do this!? Crazy. 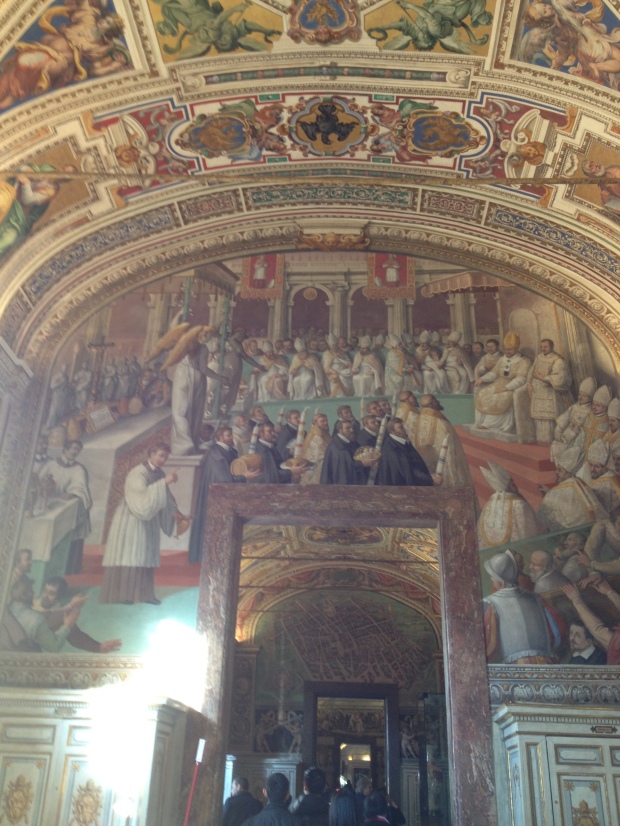 I’m not an art person, and I forget who did this painting, but its pretty impressive how you see paintings all over the walls. Seriously, you won’t find a blank wall anywhere in these rooms. My favourite rooms had got to be the Raphael Rooms, with my personal favourite – The School of Athens. I learned about this in school, and it was so cool seeing Aristotle and Plato in the picture. After the Vatican Museum, you can connect to the Sistine Chapel, which does not allow photography. The chapel is in the Apostolic Palace, which is the Pope’s official residence. It’s basically famous because of the frescoes, the ceiling and The Last Judgment created by Michelangelo. You’ll also find the Creation of Adam here! Michelangelo was definitely a pure genius.

After an afternoon of arts, we looked for some afternoon snacks. We found Alice Pizza, just minutes away from the Vatican Museum. I believe the store is actually outside of Vatican City though. The pizza was so good! It’s not your normal toppings, but with toppings like arugula, zucchini, eggplants, and more. You’ll see trays of pizza and you just let them know how much you want, and they slice them up for you. It’s priced by weight. Luckily, we were able to snatch the last few slices, because people were buying them so quickly and I think they had just taken out their last batches. So get there early and be aggressive about what you want! Some of the best Italian pizzas I had in Rome.