Before coming to Spain, I was told that the McCafes in Barcelona sold macarons! Pretty cool since macarons are seen as more of a luxury dessert, and who would think of McDonald’s when it comes to something like that! However, we quickly found that Valencia was also selling them! S and I decided we needed to try these out. They are around .75 euros each and come in flavours such as chocolate, caramel, strawberry, lemon, pistachio, and vanilla.

We gave the Pistachio and Chocolate a try. I would say that it is a bit more chewy than usual, but they still have the edges done nicely. The cream inside is also not as luxurious as the ones you usually find, but it is decent for the price of them! Worth trying once, but I would probably stick to paying a little more for some good quality ones. I love how the McCafes all have different items depending on which city you are in. I wish they had them in Canada since our McCafe does not have all these amazing desserts like tiramisu and such. Usually just the boring old muffins and coffee.

Anyways, we also went to Paris and saw these macarons, but they were around 1 euro each! So prices actually vary depending on which city you’re in. I guess Spain has them cheapest!

For dinner, we were on the look for something on the student budget side. We headed to the nearby mall for our hotel again, and spotted Los jueves! Yes, it was a Thursday and my Spanish finally came to use. So on Thursdays at Cantina Mariachi, you can get two tacos and a beer for only 3 euros! Not bad at all! 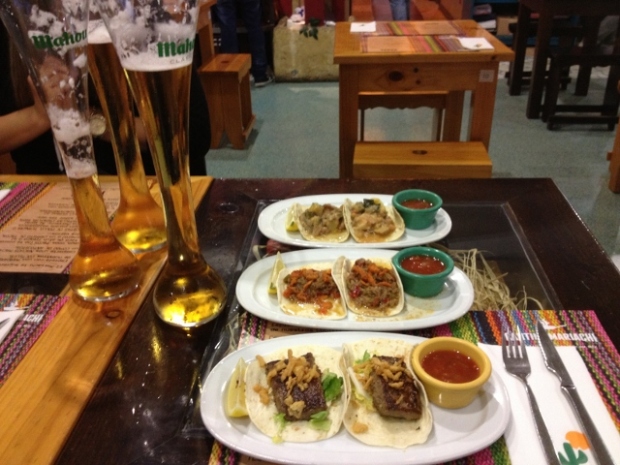 The place has a bit of a Mexican feel to it, but my god the service here is ridiculously slow. I guess I’m starting to get used to terrible service in Spain, but one would think this restaurant was more of a fast food joint. If you want to get quick food here, think again. The servers here, who are young boys walk ever so slowly and watching them move was just painful.

Anyways, our beers came and they came in some pretty cool glasses. Europeans love head on their beers, contrary to what we Canadians like. We usually try to pour our beer so we get the least possible. Here, they try to get lots. Cold beer was still great for a hot day. 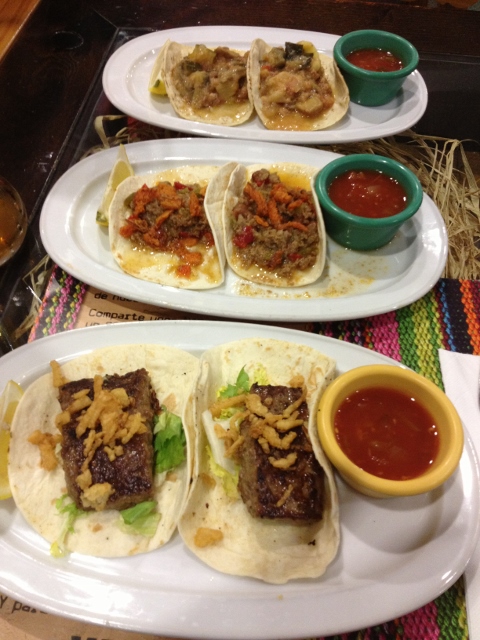 The only thing about the deal is that you must get the same two tacos. That was fine with us though, as we all ordered something different so we could try each others. M got the Taco Ranchero, which had veal cooked with mushrooms , onions and green peppers. This was a very difficult one to eat as it was very soggy. S got the Mariachi Taco, which was beef stew with beans. Also more of a wet taco, but still flavourful. Lastly, I got the Taco Beef with Cheese, which had veal steak with melted cheese. Mine was the easiest to eat and I also really enjoyed the veal steak. It was probably my favourite. Each plate also came with a cup of salsa for you to pour over.

All in all, you can’t expect much here, but the Thursday deal is definitely a steal! Just don’t expect quick service.

Yes..who knew  I would be eating Chinese food on my trip in Europe. Well, personally, I had tried to avoid it, but M here clearly cannot live without his Chinese food, and persuaded us to try it. We found Rong Hua while walking towards the old city area in Valencia and it was among some boutiques and shops in the La Xerea neighbourhood.

Surprisingly, the restaurant was filled with Chinese diners, which is always a good sign. I hope they were locals though, because I could not really tell if they were just tourists desperate for Chinese food. The inside definitely reminds me of a traditional Chinese restaurant and the employees were Chinese as well. They also have Wi-Fi here which is always a plus for travellers with no data like us!

Of course M would get his beloved Fried Rice. It actually looked pretty decent and was an okay portion. I believe it was under 5 euros, which isn’t too bad I guess.

S and I decided to share a Chicken Curry and we also ordered some White Rice to go with it. It was nice to finally have some white rice again, but the curry was just…unspeakable. It was basically watered-down curry – probably one where you put powder and water, but it wasn’t even thick. You really had to slather the chicken in the sauce to get some flavour, but even with that, it was really flavourless. It was worse than some of the one’s I’ve had at food courts…

Lastly, S and I decided to share a Caramel Pudding, which is essentially their flan. This was the best of our whole meal. Smooth and creamy, this totally satisfied me.

All in all, I wouldn’t recommend Rong Hua based on what I had. I sense that the food is catered for the Spanish population, and isn’t traditional Chinese food. Oh, how I miss Chinese food in Vancouver so much!

La Surena is inside Centro Commercial El Saler in Valencia. This mall was near our hotel and on a rainy evening, M and I decided to look for nearby food. We ended up in the mall and on the floor where all the food stalls and restaurants were. We came across La Surena and thinking that I knew all the Spanish in the world after just taking Spanish100, I decided to attempt to translate the menu. I read chicken and fish and all, and naively thought that I would be having a fantastic meal for a ridiculous price. Yea right… So our meal came to $11 euros and that included 2 large pints of beer.

And this is really what he had ordered… 7 mini sandwiches and a salad for S (which was also the most expensive item on our bill). So apparently on specific days, you can get mini sandwiches for just 1 euro! Yea, and they were filled with all the ingredients I had attempted to translate…So I hadn’t exactly gotten the translations wrong, I just didn’t know they would be coming inside a sandwich…a mini one to be exact. And although M hates sandwiches, he admitted that these were pretty good! The ingredients and sauce inside really made it delicious. I actually wouldn’t mind having these agin to be honest. Just funny how I sort of tricked M into getting sandwiches when I really didn’t know. The place was packed and their other popular items are nachos which are also dirt cheap. This would be the perfect place to grab a quick snack and a beer. On different days, they also have other deals such as a bucket of beer for a really cheap price.

Finally posting some of my Europe food adventures! First stop was in Barcelona, but shortly after getting settled down, I met up with S and M to bus to Valencia. The next day, we would head to Bunol for the famous Tomatina Festival, where it is a food fight of throwing tomatoes at each other. In the meantime, we were in beautiful Valencia and were taken to the beach area. We wandered looking for food and settled at the Tapasbar.

The place was quite packed, and they offered a set menu, that I would quickly learn is extremely popular in Spain. The menu here wasn’t too cheap, and cost $13 euros. It included an appetizer, main course, dessert, bread, and a drink.

For my appetizer, I chose the Prosciutto and Melon. Thinking of any type of ham now actually sort of makes me sick. It is so popular in Spain, that I kept eating it the first month and I’m at the point now where I don’t usually choose it anymore. The ham jamon wasn’t as smooth as I would’ve liked it to be, with the edges being very fatty and tough. It worked well with the melon though, and the plate was extremely large for an appetizer. As for my drink, we got a jug of sangria between the three of us, which gave us around 2 glasses each. Sangria is so popular in Spain, that I end up ordering it most of the time.

For my main course, I chose the Grilled Lamb Chops. Probably shouldn’t have chosen this as it was extremely tough. Shouldn’t have expected any good lamb for the price I was paying. It was full of tendons that were not edible and the meat was overcooked. The grilled vegetables were also a bit burnt, so I didn’t really enjoy them. We all agreed that the fries tasted sort of different from our North American fries. We came to the conclusion that the potatoes in Spain must be of different origin. They had a distinct taste that we weren’t quite used to. The other odd thing is they don’t supply you with ketchup unless you ask. I guess ketchup and fries are an American thing..

For dessert, I chose the Tiramisu although I know it doesn’t originate from Spain. I just craved it and thought it would be a safe choice. Indeed it was. It was soft and creamy with just the right amount of liquor in it. It wasn’t too sweet which I liked. Not bad!

S chose the Flan for her dessert and I decided to get a picture of it too. I’ll soon realize that flan is extremely popular in Spain and also one of my favourite desserts. It was smooth and creamy and of course sweet! Yum.

Overall, Tapas bar was just mediocre for the price I paid. Definitely not worth it because there are actually much better deals around town. We were hungry and most restaurants had large lines, so we settled for this. Also to remember is to give yourself lots of time for meals, because service in Spain is ridiculously slow.