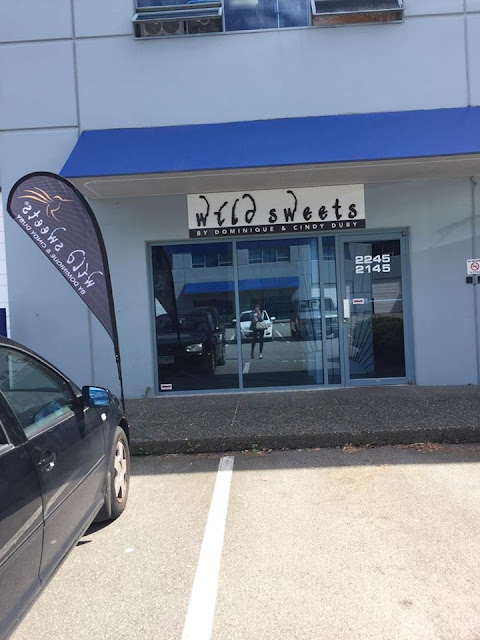 Disclosure: All food and beverages were complimentary, but all opinions are my own.

Wild Sweets is always coming up with innovative desserts each season. They have recently launched their 2017 summer collection, and we got a sneak peak to see what there is to offer! Last time I visited Wild Sweets, we got to try their Chocolate Tea, which is a drink made entirely from pure in-house roasted cocoa bean husks only and no sugar or any other ingredients are added except for a touch of vanilla bean powder. Now, for the summer, they have blended the tea with pure fruit purées and lightly sweetened with a vanilla syrup. You get this undertone of chocolate flavour, but the overall drink is fruity and refreshing when served cold. Currently, there are 5 flavours: Strawberry, White Pear, Lychee Raspberry, Morello Cherry, and Apricot Passion. My personal favourites are the Lychee Raspberry and Apricot Passion. 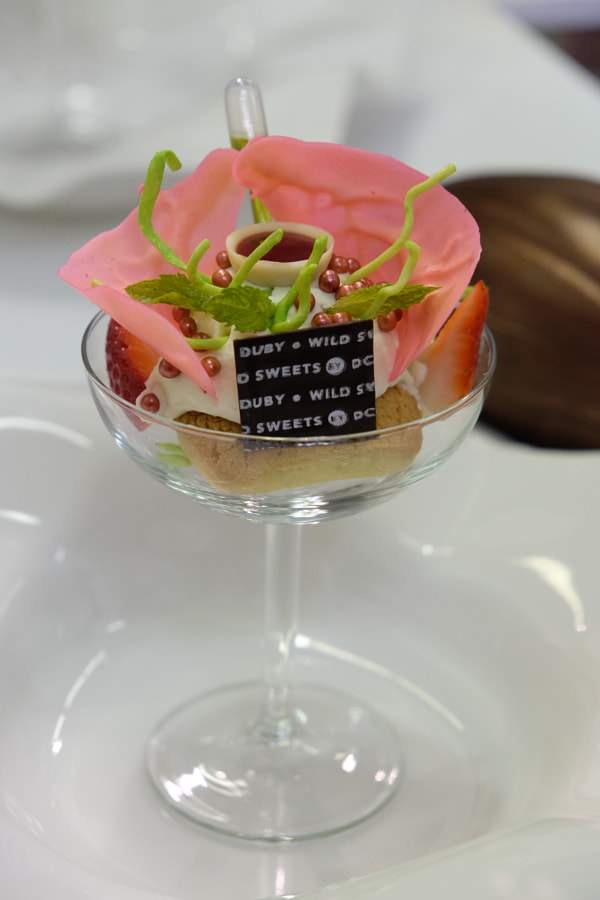 The new C|Puff2s are Wild Sweet’s take on the classic cream puff. However, their cream puffs are not round, but instead a square shape! The Strawberry Cream C|Puff2 features a choux pastry and almond cookie crust filled with a strawberry custard cream, white chocolate Chantilly mousse, fresh strawberries, red berry confit, and served with an encapsulated mint aroma pipette. It is then decorated with chocolate cereal pearls, paper thin hand-painted chocolate petals and chocolate ‘pasta’ strands. 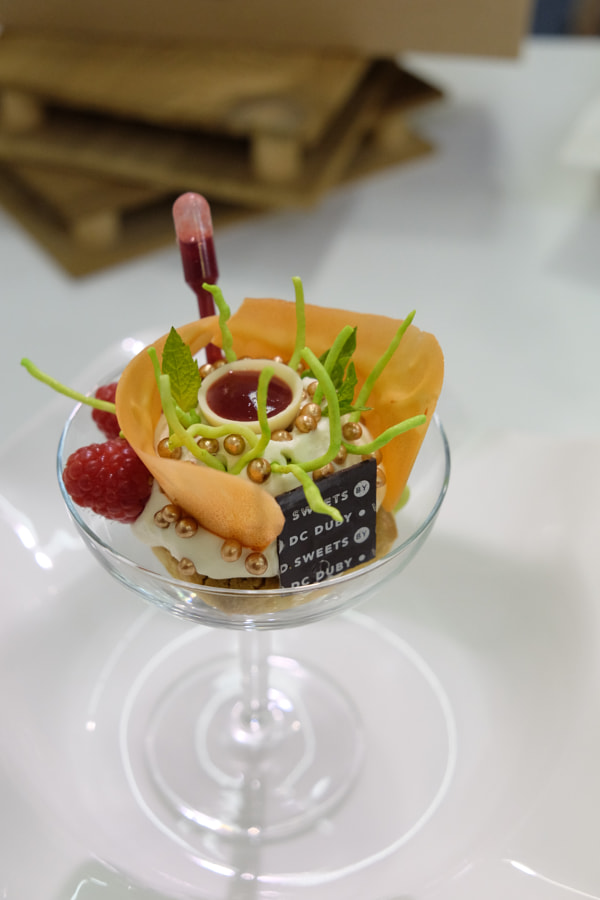 The Chocolate Cream C|Puff2 features a dark chocolate custard cream, white chocolate Chantilly mousse, fresh raspberries, red fruit confit, red fruit Kirch aroma. I love how there are so many components to these desserts and they all work together. The amount of work that goes into each piece before it gets assembled is really amazing! What a piece of art! 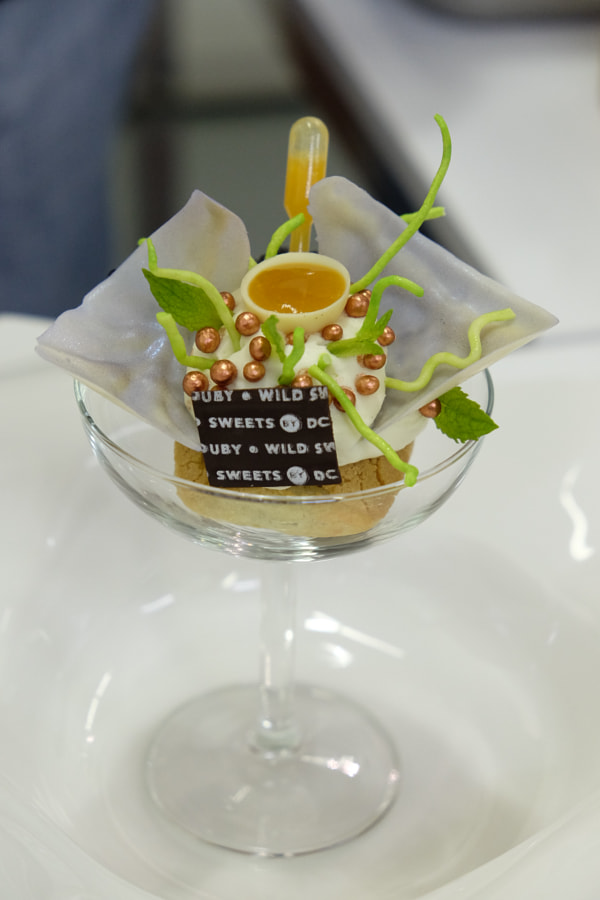 The Praline Cream C|Puff2 features a hazelnut praliné custard cream, white chocolate Chantilly mousse, fresh black berries, apricot passion confit, and orange liquor aroma. This is perfect if you love hazelnut, but can be slightly on the sweeter side. 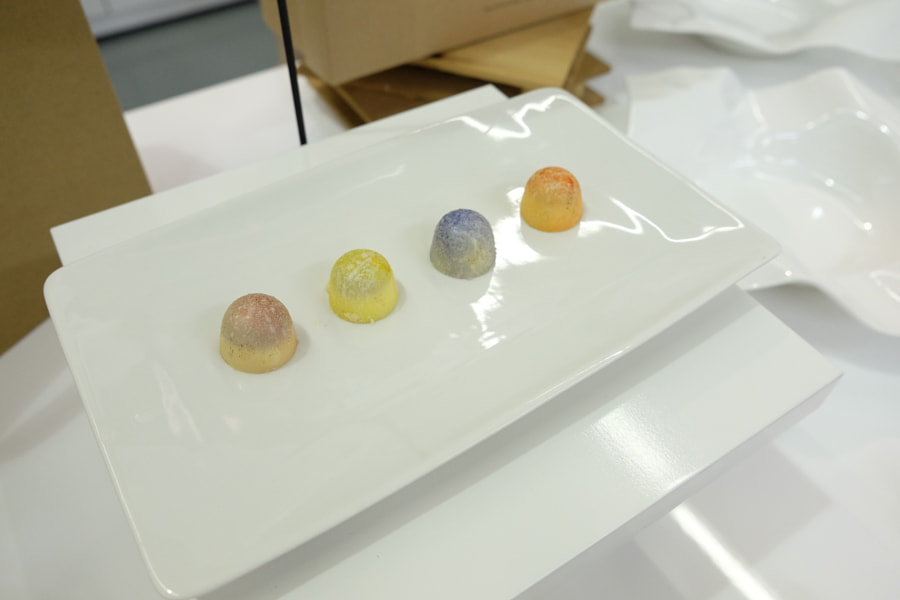 Each of the Summer 2017 Collection chocolates feature 2 types of fillings including a fruit-based liquid caramel while the other is a ‘Créme Fraîche Vanille’ – a lightly sweetened soft cream made by emulsifying fresh cream and butter scented with vanilla bean. All of the chocolates are hand-painted with cocoa butter colours in different artistic patterns. They are designed to be eaten cold from the fridge so make sure to keep them chilled! The following flavours are available: 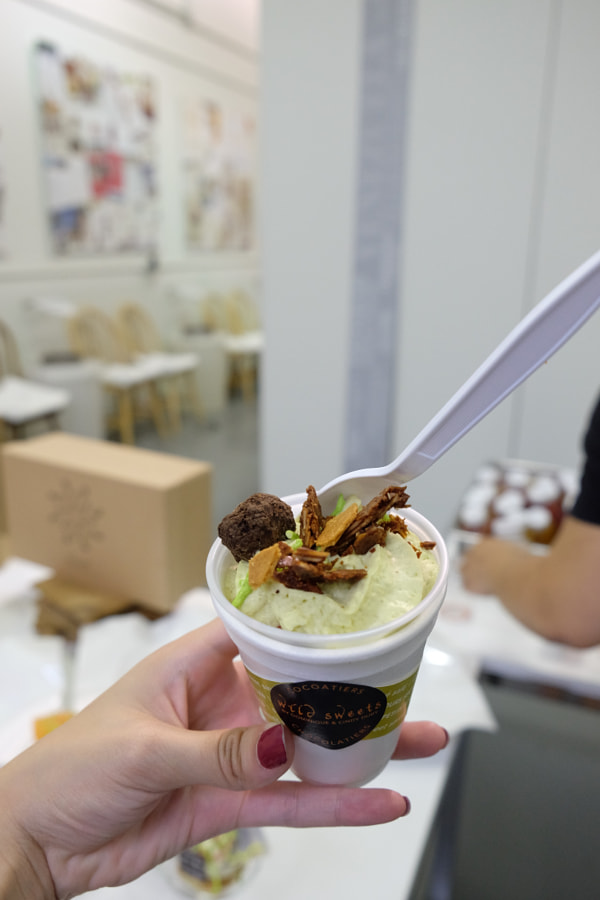 Last but not least, Wild Sweets has also come out with some Ice Cream Desserts. The one pictured above is the Dark Fruit Sundae which features:

The other flavour is the Red Fruit Sundae which features:

Yes – it’s crazy how many components there are to the ice cream! Each bite, you will find something different! 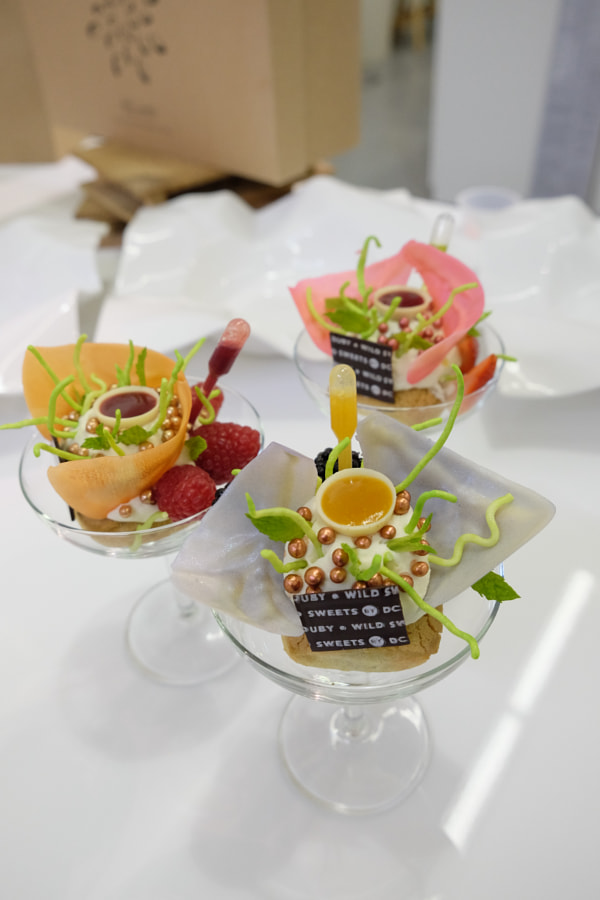 Overall, there are definitely beautiful pieces of edible art for Wild Sweets’ new 2017 summer collection! You’ll have to pick these goodies up at the Atelier in Richmond, which is open Saturdays from 10:00 AM to 4:00 PM & Sundays from 12:00 to 4:00 PM. If you’re looking to pick them up from Mondays to Friday, you can also do so by making an appointment in advance. Check out their website for the full collection! 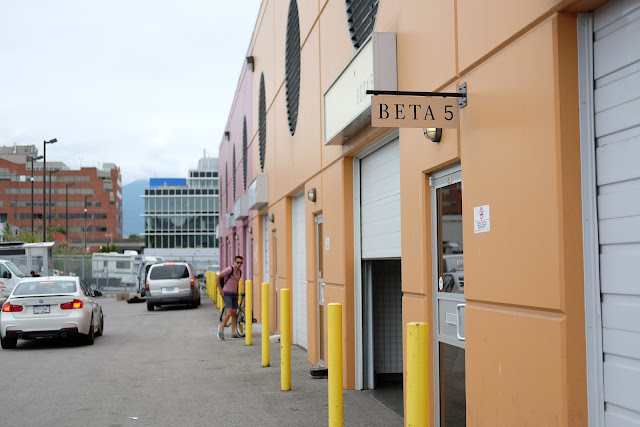 NOTE: All desserts provided in the media event in the first section were complimentary. All opinions are based on my own experience.

Beta5‘s 2016 summer collection, ‘livin’s easy’ launched last month and we were invited to attend their media event to try out all the new items. Beta5 is located in an industrial area which is not transit friendly, but so worth the trip! 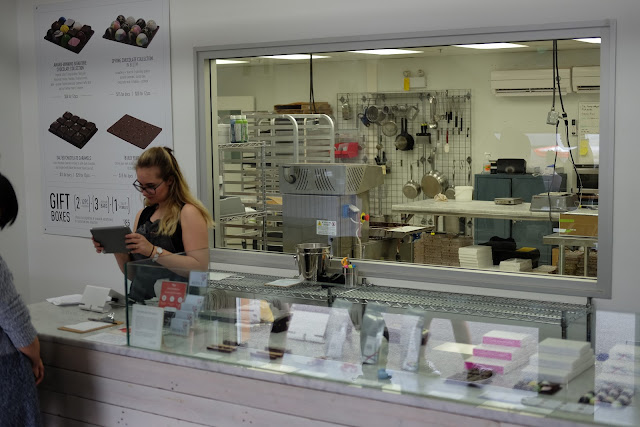 The shop front is quite small but you can see the chefs at work in the back which is pretty cool. 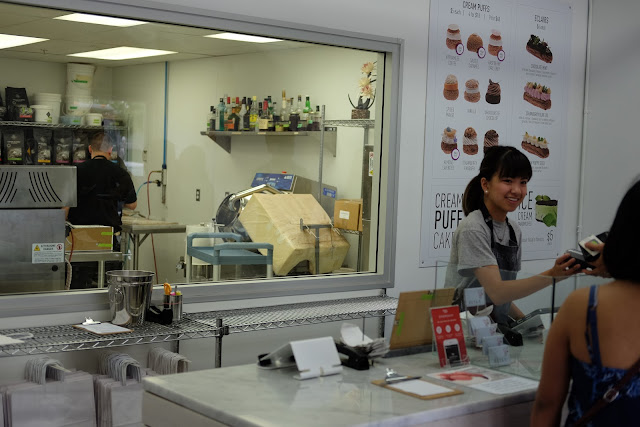 Remember to come here early as these goodies run out quick. Many times, I arrived near closing and they sold out of many of the flavours I wanted.

I really enjoyed that fizz in the chocolate. It was like eating those popping candy!

One of my favourite desserts of the night was the Pina Colada Cream Puff. Something about it was so mysterious being all black! But inside was filled with a fruit pineapple curd and was perfect for the summer!

Refreshing and perfect for the summer!

This was super witty as the eclair tasted just like peanut butter on celery! Perfect for those who enjoy celery.

This brings back memories of having s’mores in front of the campfire in the summertime. Tastes just like a S’more!

Another one of my favourites and who can resist how cut this looks! Gobble it quick before the ice cream melts!

The flavours are bold and bright and bring back childhood memories of summer.

We also got to try their Mint Chocolate Sundae which is part of their ice cream social. 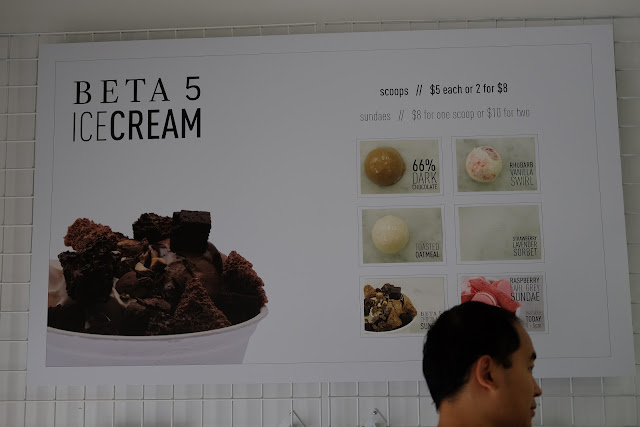 Beta5’s Ice Cream Social happens every Saturday from 1-5pm. They serve up sundaes, ice creams and sorbets and they have a special flavour every week. 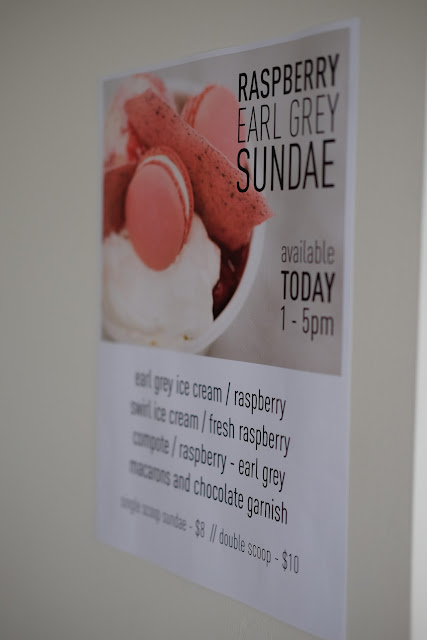 On another occasion, separate from the media event, S and I checked out their ice cream social which featured the Raspberry Earl Grey Sundae. 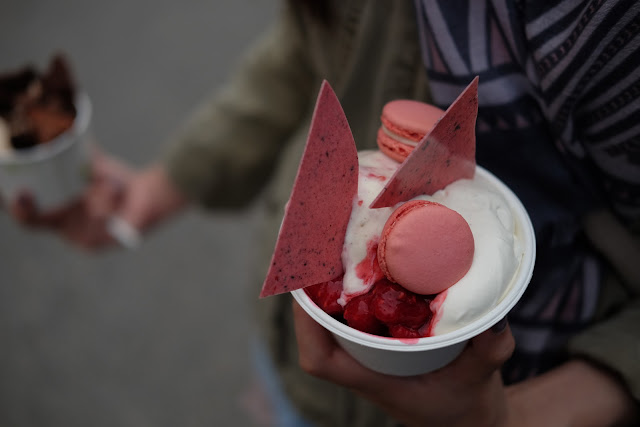 This was so delicious! It came with earl grey sundae, raspberry swirl ice cream, fresh raspberry compote, raspberry-earl grey macarons and chocolate garnishes. Loved how creamy the ice cream was! 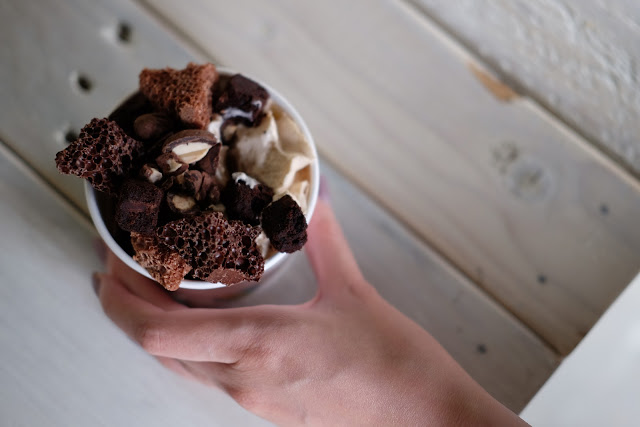 One of the sundaes they featured in July was the Signature Chocolate Sundae. We were able to choose from a variety of sorbets and ice creams and the toppings were preset. We went with the cola sorbet and it was so refreshing! I loved the textures of the different chocolate garnishes as some had a nice crunch. 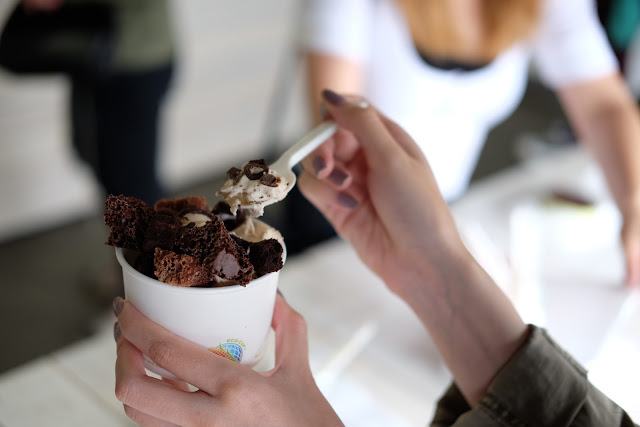 Overall, we had an amazing time at the media event as well as our own visit to Beta 5. Definitely worth checking out during the summer as you can grab some ice cream (which is only available during summer) and take a box of the summer collection goodies home! Makes a perfect gift too!

Chewy Junior opened their first North American flagship store in Vancouver last year in Gastown. I’ve walked by it many times and it always smelled really good. It’s a Singaporean chain store with various locations in Asia. They offer a healthy version of cream puffs, since they are baked rather than fried.

They have around 10 flavours to choose from and are priced from around $3.50 to $4.00 depending on the flavour.

I decided to get one each for S and I. I chose the Chocolate Oreo Crunch for S, which didn’t look too appealing. It was topped with crushed Oreo cookies on the top and filled with chocolate cream. Slightly on the sweet side, but not bad.

For myself, I got the Matcha Nippon, which featured a matcha glaze and was filled with matcha cream. The cream puffs themselves are on the chewy side, hence perhaps why they are named Chewy Junior. I actually quite liked this chewy texture, but I still prefer Beta 5’s cream puffs. I find that these are quite pricey for what they are. They are more unique than Beard Papa, but priced a lot higher. Beta 5 is priced slightly higher, but the flavours are very unique and of high quality. Would I come back? Probably not, but I’d say the cream puffs aren’t bad.

Pros:
– Cream puffs are average, but I enjoy the chewy texture
– Lots of cream filling

Cons:
– Slightly on the pricey side for the size
– Not a lot of flavours to choose from – they seem to sell out

Cream puffs are one of my guilty pleasures. I’m not always craving for them, but they always make my day when I have one once in a while. There’s the go to place, like Beard Papa, but Beta5 Chocolates is the place to get unique cream puffs! I’ve had one before, and finally, K came home with a box of 4 to share. How could I say no? A box of 4 will come to a price of $16. It’s quite pricey, but they’re also quite large and well worth the splurge! They recently launched the Cherry Cola, which is the one with a red piece of chocolate. I loved the hint of cherry flavour, but it was mostly a cola flavour. Felt a little fizzy actually. The Milk Chocolate Praline, which was dusted with icing sugar, was also quite good, with the milk chocolate being very creamy and smooth. I liked how it wasn’t too sweet.

The Blueberry Yuzu had a yellow piece of chocolate on top. Beta5 is very famous for their chocolates, so of course even the piece of chocolate was smooth. The cream puff shell’s texture is a bit different from typical cream puffs. It’s a bit harder, so even when you cut into it, the shape stays.

The Blueberry Yuzu was very refreshing. It was filled mostly with vanilla cream, but you could taste the slightly sour taste of the yuzu. The blueberry jam was great to bring sweetness to the puff.

The 85% Dark Chocolate and Caramel of course came with a piece of dark chocolate with a speck of gold. The puff itself was chocolate flavoured and filled with dark chocolate cream and caramel, which made it extra smooth and creamy. One of my favourites out of the four I tried!

Overall, Beta5 is a great change to your typical Beard Papa or store bought cream puffs. They are slightly pricey, but a great treat once in a while. I just wish their location wasn’t so far off. Their hours also close when most people get off work…so it’s always hard for me to get more!