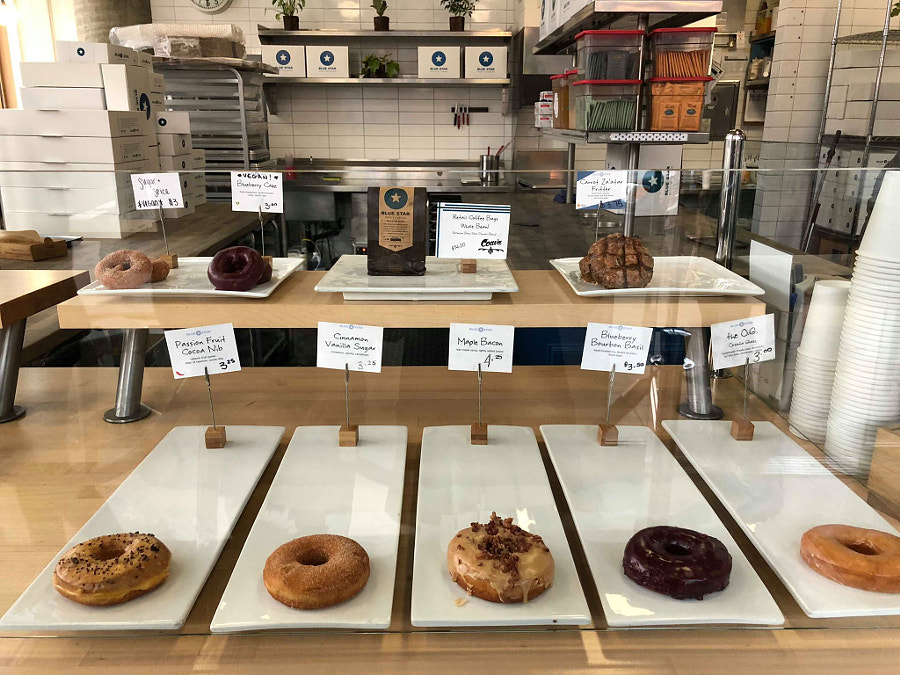 Not my first time at Blue Star Donuts, but because it was so close to our hotel, I suggested coming by for a quick snack. Blue Star is known for their high quality ingredients and unique flavours. They have some of their most classic and popular donuts on display everyday, but usually will have some rotating flavours as well. The donuts are not cheap, and I think they might’ve increased prices since the last time I visited as well. Donuts are around USD$3-4 so definitely a premium. 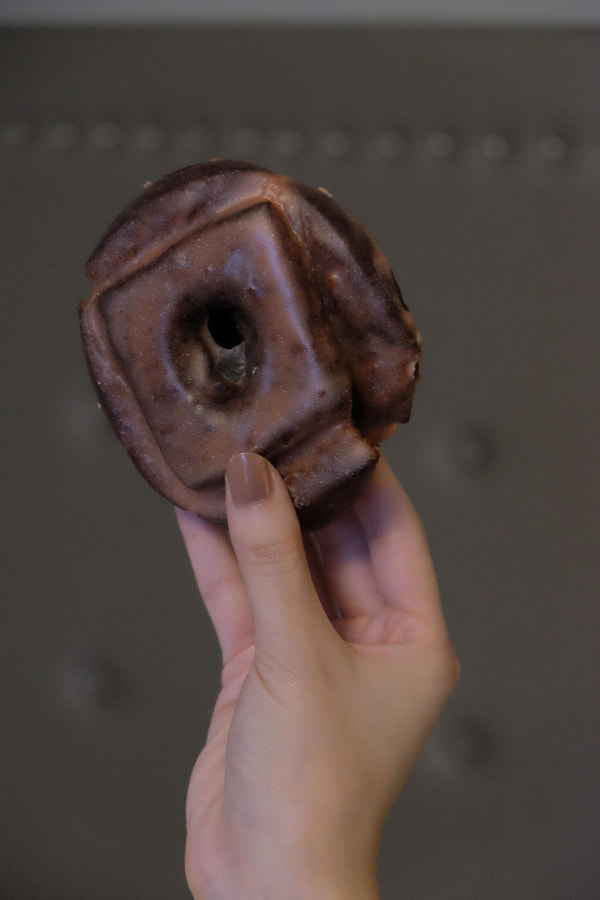 I noticed they had some new flavours including the 24K Rose-Rosé which features a French dark chocolate buttermilk with a rose water and sparking rosé glaze. I loved how the colour was sparkly and the glaze itself was strong in rose flavour. This was actually our favourite because the chocolate donut itself wasn’t overly sweet. The donut itself is super crunchy on the outside but moist inside. 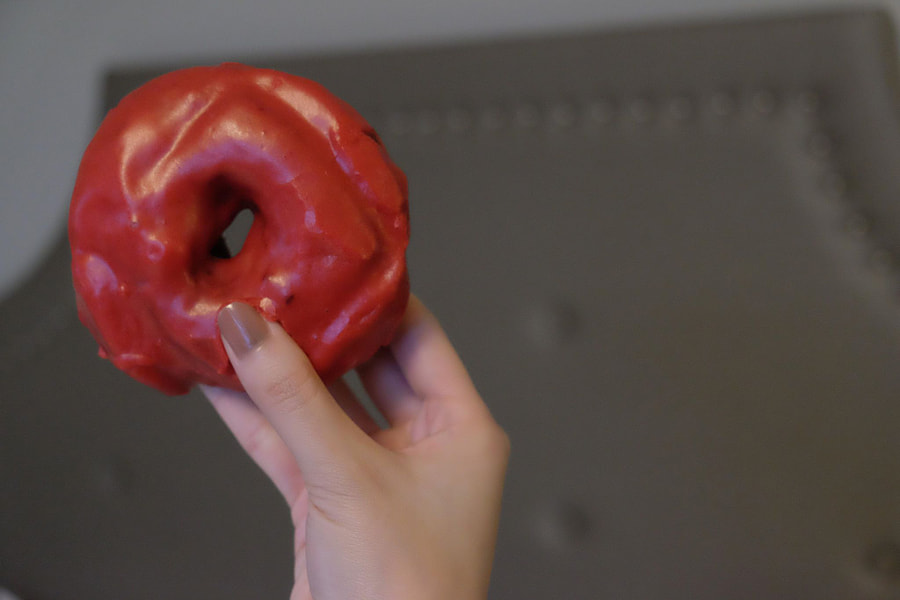 The second donut we got was the Raspberry Rosemary Buttermilk which featured a glaze made of fresh raspberries and fresh rosemary. This one was slightly sweeter and had a bit of tartness to it but featured the same buttermilk cake batter.

Both donuts were very filling and is great for sharing. It was interesting that both the donuts we chose also had this cool square shape inside the circle. Quite different compared to the typical ring donuts they usually have. Worth giving a try but definitively a bit of a splurge. 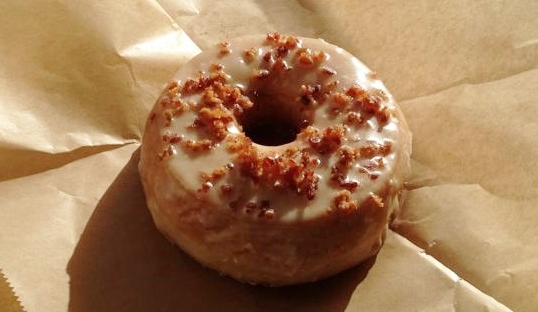 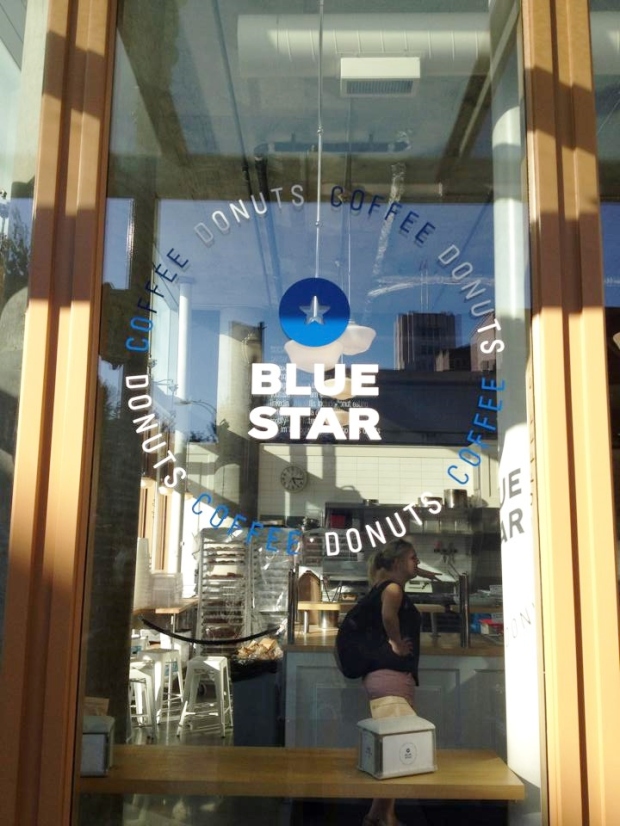 Voodoo Doughnuts is always raved about when speaking of Portland, but K mentioned that Blue Star Donuts is the best new donut shop in town. Plus, walking by Voodoo and seeing that massive line up made me not want to give it a try. So instead, we walked by Blue Star, which had no line up but a steady customer base. We arrived quite late as well, so probably why there was no line up. They close when their donuts run out, so we were lucky to still get some! 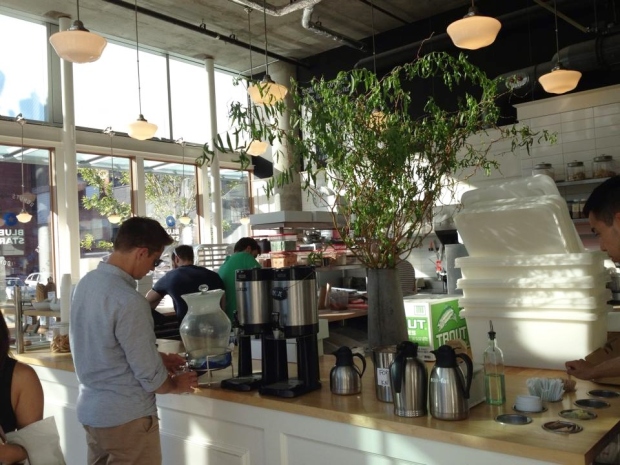 I love how the store uses natural sunlight through the glass windows. It feels clean and modern inside. There’s also complimentary water here. 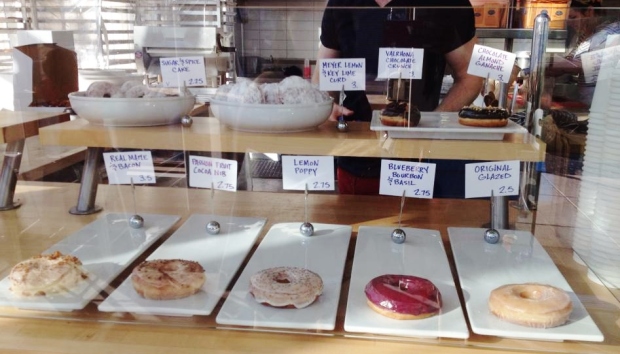 They don’t have as many varieties as Voodoo, but I find that shops with a limited menu usually have better quality food. They have a display case with their donuts and the flavours change daily. The dough is made from scratch every day and their ingredients are all sustainable or organic. The donuts are also cooked with rice oil and are glazed to order. 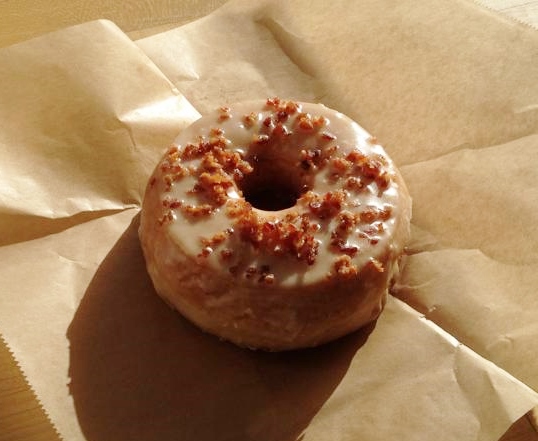 Their donuts follow a Brioche recipe, so I found that the dough was very light and not dense like cheaper donuts. J went for the Real Maple & Bacon, which is a quite common flavour for donuts these days. The sweet and salty seem to always work and who can say no to desserts with bacon on it? 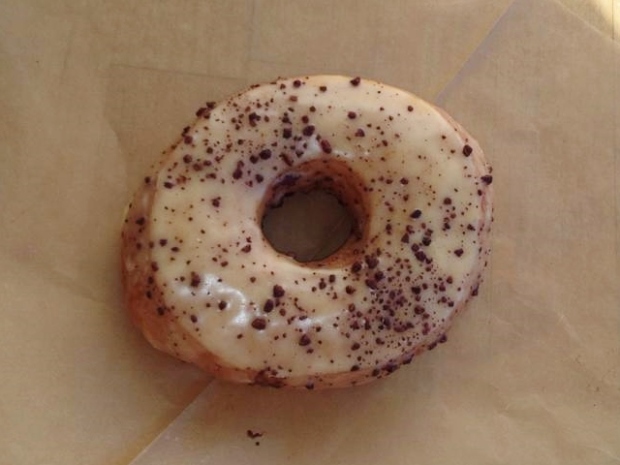 K and I shared the Passion Fruit Cocoa Nib, which was super unique! The passion fruit brought the sourness, but it was well balanced with the cocoa nibs which were sweet. Who knew that the two would work so well on a donut.

Overall, from the donuts we tried, we were all very satisfied. They definitely have interesting donut flavours and reminds me of Cartems Donuterie in Vancouver. The donuts run at around $2.75, but are well worth it. If you’re looking for unique flavours and quality, then Blue Star Donuts does just that. It seems that Voodoo would be more for unique visual presentation.

After Tubby Dogs, we decided to head down a few streets to grab some desserts! Jelly Modern Doughnuts is a chic yet casual little shop offering creative gourmet doughnuts in Calgary.

They also seem to have a Jelly Food Truck, which sounds really cool. I’m not sure where they are located though, so any Calgary foodies out there can let me know!

When we arrived, most of the doughnuts were already sold out! The place isn’t packed, but they have a steady amount of customers coming in and out. Look at that kid trying to decide from all the delicious flavours!

Lots of customers buy boxes of their doughnuts for take out as well. If you choose to eat in, you still order and pay at the counter.

I love the atmosphere in the shop. It is girly but also family oriented. They have low sofas and wooden chairs with pink lanterns and couches. If I lived in Calgary, this would totally be a cute place to hang out and chat with friends during the day.

The customer in front of us actually bought the last ones by the time we got in line, but luckily the baker came out and we asked him if there would be any more. Luckily, he had just made another batch! A few minutes later, he brought us a large S’mores Doughnut! Surprisingly, it wasn’t as sweet as I had imagined. I loved the marshmallow at the top though. The doughnuts are quite big though, so one is already plenty.

The second doughnut we ordered was the Maple Bacon Doughnut. It was glazed with a maple glaze and topped with some bacon. Sweet and salty at the same time, but it totally works.

Doughnuts are $2.45 each if you purchase singles, but if you purchase more, I believe there are bulk discounts. Of course, they are more expensive than Tim Horton’s doughnuts, but they are gourmet! However, I actually think that Cartems Donuterie in Vancouver are much better! Their bacon doughnut was much better and the general doughnut dough tastes more fresh. I guess this is their go-to place for gourmet doughnuts in Calgary though!

On our way to Nicli Antica Pizzeria, we drove by Cartems Donuterie, which is said to be one Vancouver’s best donut shops. S and I knew we had to stop by after desserts, and so we did. And of course we had a little adventure while heading over. We left the car at our paid street parking near the pizzeria, and started heading towards the donut pop up shop. It’s literally only 2 blocks away, and short blocks too, but did it ever feel like the longest walk ever… I have to remind you this is on the edge of Gastown, and not to be judgmental, this area is full of homeless people. And so S and I began to speed walk. Or more like run. We were so desperate for these donuts that we sped down that block to avoid all the sketchiness. We were literally panting when we got there, or at least I was. Shows how much I exercise…

Anyways, we were greeted by a friendly man, whom I’m guessing was the owner. S and I were just staring at all those donuts behind the window. So many choices! But we had just ate. So we decided to choose two! The man saw that we were kind of confused staring at all those donuts, so he offered some help. We told him it was our first time, and asked what were the most popular donuts, and he said the Earl Grey and the Maker’s Bourbon Bacon. And so we got those two. He was really nice, and actually gave us two Earl Greys. He said that he had made a batch of them that were smaller than usual, and so he gave us two of those instead. But when I looked at them, they were still pretty big! So nice of him. Anyways, I forgot to take pictures of them, since I was too excited to eat them, but you can see what they look like on their website. We basically ran back to the car again…excited to try these donuts.

The Earl Grey was oh so delicious! It’s a cake donut infused with organic earl grey tea, topped with earl grey glaze and a sprinkling of rose petals. I’m a fan of earl grey or green tea when I go for high tea so this was perfect for me! The earl grey wasn’t too strong, and I liked that, and the rose petals on top were perfect with the hint of floral aroma. Floral teas are also one of my favourites, so this was like full of goodness!! Next up was the Maker’s Bourbon Bacon. Bacon? Yes Bacon on a donut. (I’m still waiting to try Bacon Gelato by the way…) But yes, bacon on donut is now one of my favourite donuts! The donut was glazed with the Maker’s Mark bourbon glaze and topped with double smoked house cured candied bacon. So delicious! I love how it was sweet and salty at the same time, but it just worked all so well! Another note to keep in mind: these donuts are gourmet and expensive. They use local ingredients, and are priced at $3.00 a donut! Yes, that’s triple the price of the donuts and Tim Horton’s…

So worth the sweat and run to get these donuts though…

Vancouver weather has finally been more pleasant and a sunny day meant heading over to the Steveston Village for a walk. Everyone has been talking about these donuts at Outpost Mini Donu Co. for a while, but I never even noticed this donut shop although I walk past it almost every time I’m there. The interior is really cute and cozy, and you can see the making of donuts coming fresh out of the oven. I got half a dozen of a variety of donuts, including chocolate, vanilla, pink lemonade and cinnamon to name a few. Although they have all these flavours, my favourites are still the original cinnamon sugar coated donuts. Overall, great fresh donuts in a lovely area!