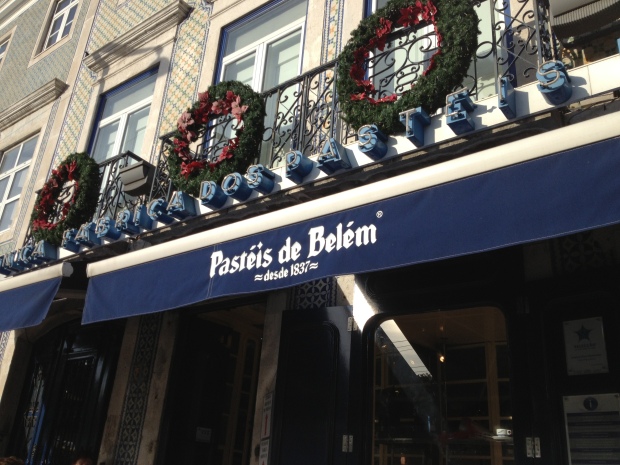 After lunch, our hostel recommended us to visit Belem, which is the secondary local administrative unit in Portugal. It’s historically famous because of the number of Portuguese explorers embark their voyages from this area. Even Christopher Columbus stopped here! To get here, you just need to take the Tram 15E from the city center area and you get some nice views along the way. You’ll figure out where to get off just by seeing a bunch of tourists all disembarking the tram. We sort of followed some people, and we soon realized everyone was going to Pasteis de Belem! 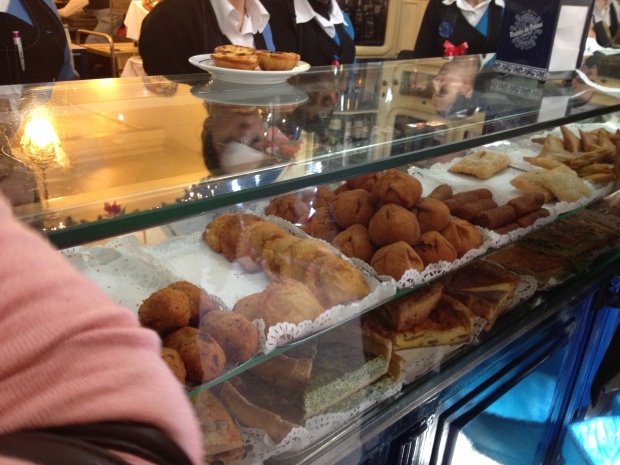 Pasteis de Belem is a pastry shop that existed since 1837. This shop is the birthplace of Pasteis de nata, or Portuguese egg tarts. They were created when Catholic monks of the 18th century used leftover egg yolks to create cakes and pastries for a living. My mom was pretty excited since she loves Asian egg tarts and she knew Portugal is famous for them. 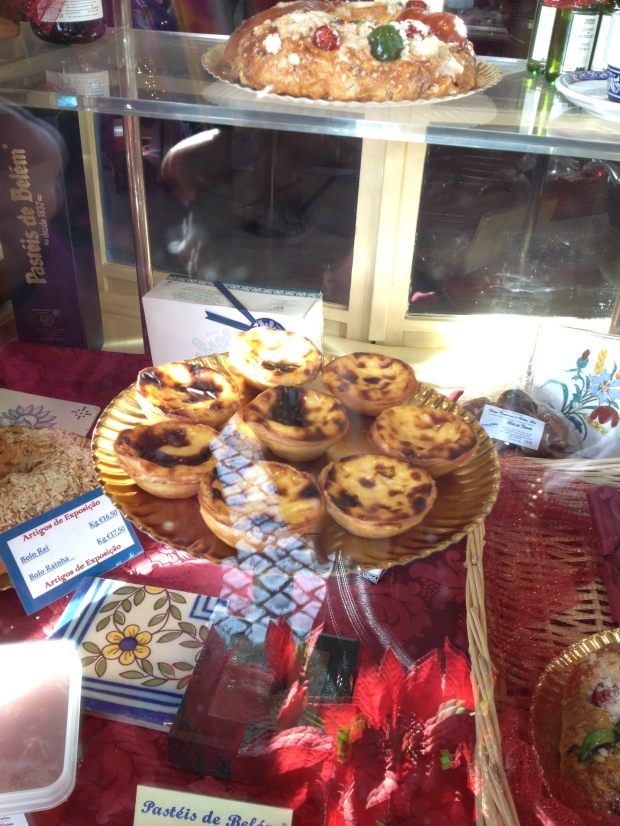 Other than Pasteis de nata, they also sell a variety of other cakes and pastries. But it seemed that everyone was just here for the tarts! We found a huge line up outside, but it moved very quickly. They also have seating inside, but we found that getting take out was the best and quickest way. They pack them for you in a little box. 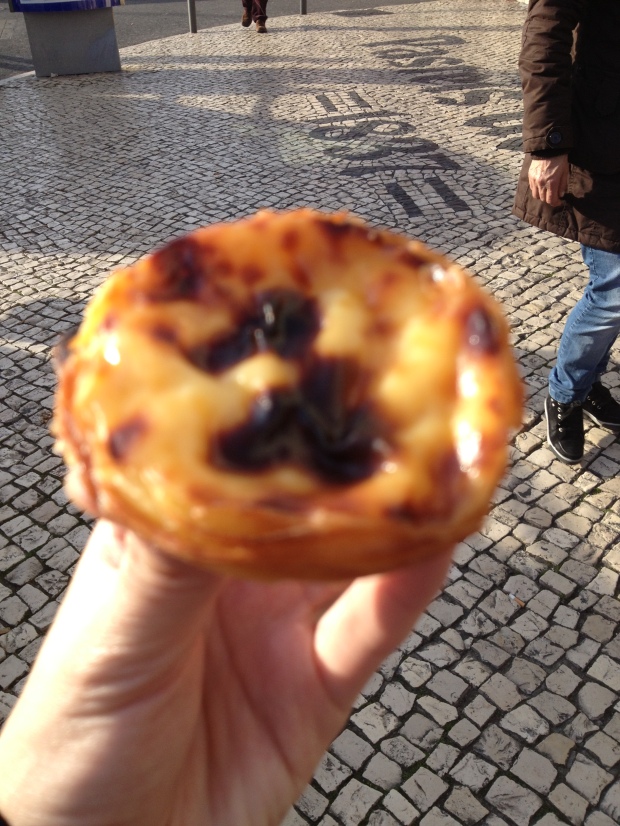 A terrible blurry picture of the Pasteis de nata, but I was too excited to just eat it. It’s slightly burnt at the top, but you can’t really taste any burnt taste. The filling is sort of like a creme brulee, or typical Chinese egg tarts, but the bottom was what surprised me! I’m used to typical solid tarts like in fruit tarts, or the flaky tart for some Chinese egg tarts, but this one was a crispy shell! Very layered, but you get a nice crunch as you bite into it. The filling is also much creamier than typical egg custards. You can also sprinkle some powdered sugar and cinnamon on top which gives it a nice sweet flavour! I would definitely recommend coming here to give them a try! One of the best egg tarts I’ve had and reasonably priced. 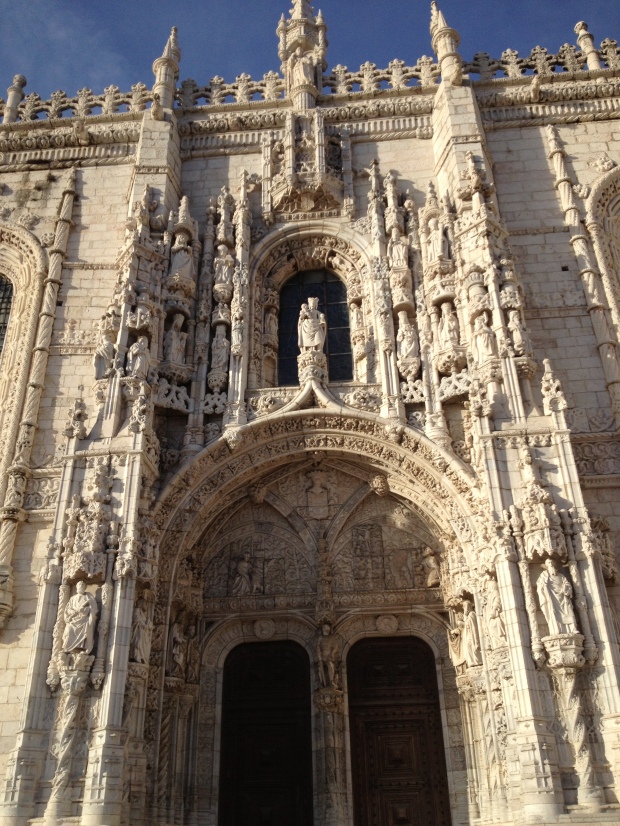 A few steps down, and you will arrive at the impressive Jeronimos Monastery (also the monastery from where the monks made the pasteis de nata!) This monastery basically is a symbol of Portugal’s power and wealth back in the day when King Manuel I built it. It dates back to 1502! 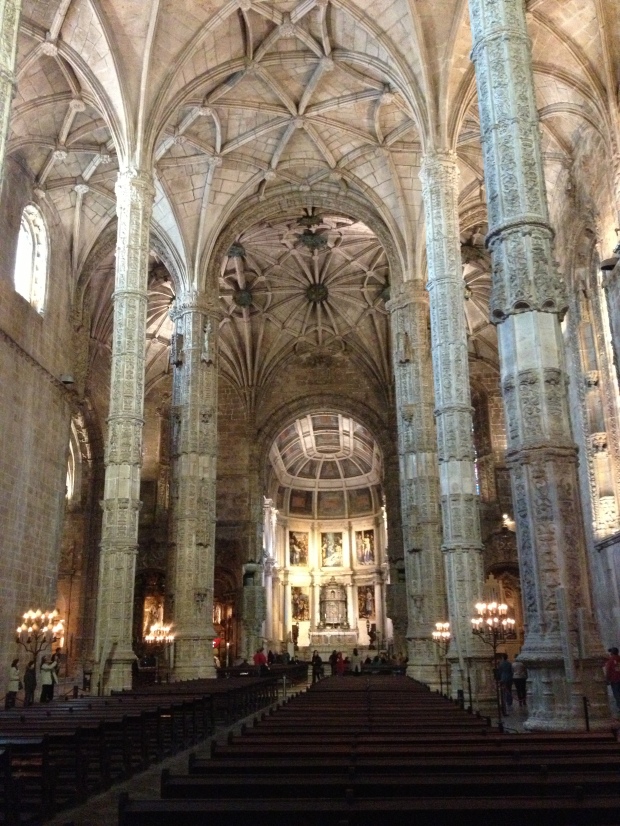 Inside, it’s very spacious, and you can definitely tell how old it is! It’s not as luxurious looking as some of the Italian or French churches, but definitely very large! However, the architecture is beautiful with each column carved with different items related to the sea. The monks here gave spiritual guidance to sailors and pray for the King’s soul and Vasco de Gama, a navigator and his crew, spent their night here before their voyage which was a success. Today, Vasco de Gama’s tomb is located here, as well several other important Portuguese figures. If you have a Lisboa Card, it is free entry, but even though we did not, we somehow entered for free… 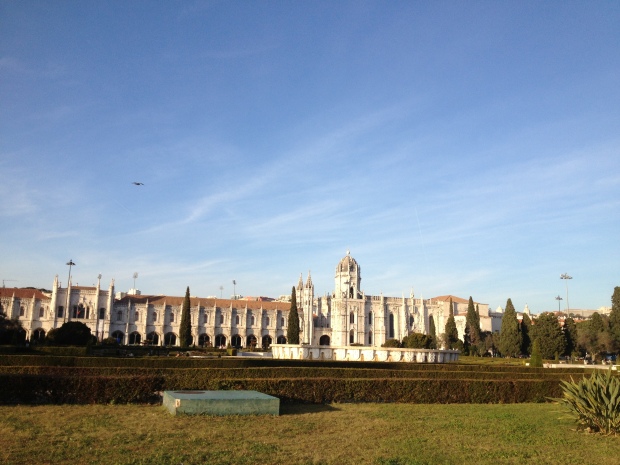 From afar the Jeronimos Monastery is huge! There are also various museums if you continue to walk further down. They have a maritime museum which showcases Portugal’s sea exploration, which is very well known. 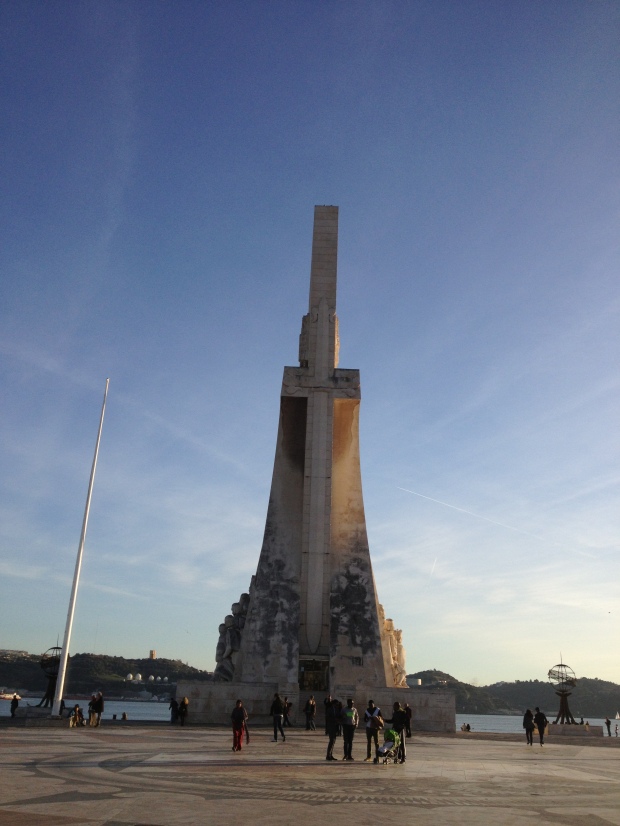 If you walk across the Jeronimos Monastery and towards the water, you will see the Discoveries Monument. You will need to go on an underground staircase to reach this spot where the Tagus River is. This monument was built to commemorate the death of Prince Henry, a navigator. 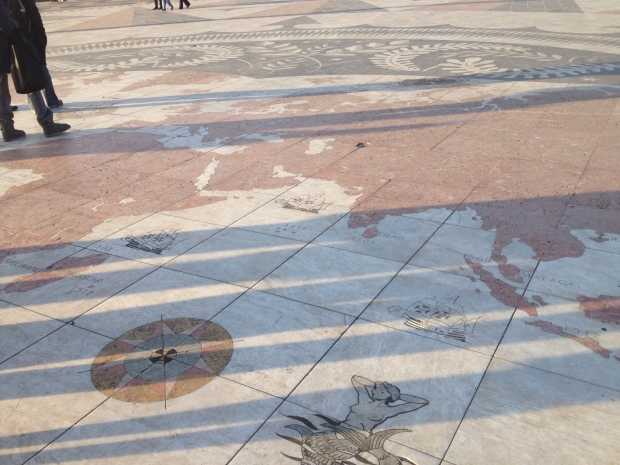 In front of the monument, you will see a drawing of the world on the floor. What I believe the pinpoints are, are locations that navigators traveled to. The only one I sort of was familiar with was Macau, which Portugal had power over. 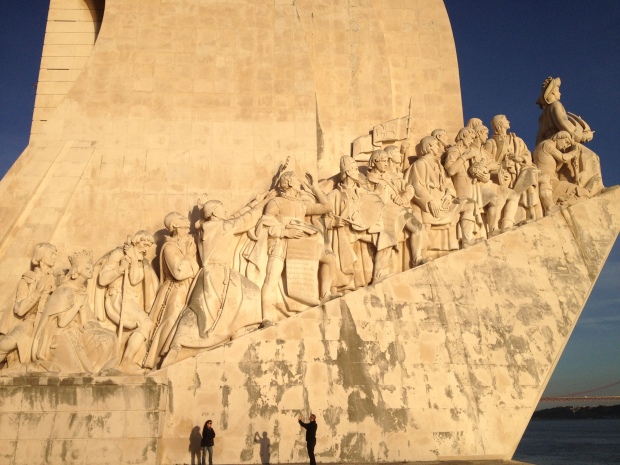 This is the side view of the Discoveries Monument which is basically a ship with the important figures of history, including Portuguese explorers. 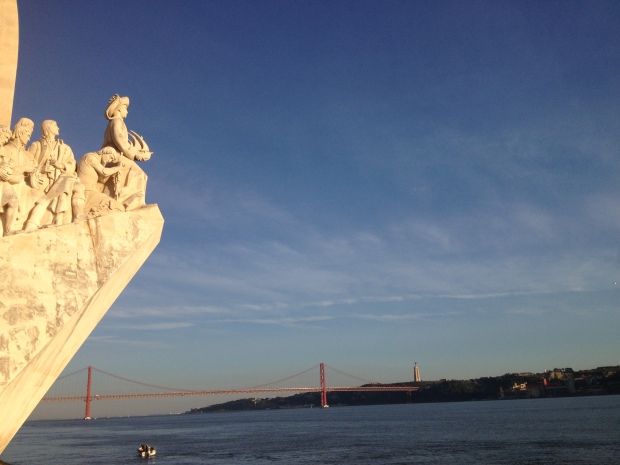 If you look out from the monument, you will see the 25 de Abril Bridge. My initial thought was “It’s the Golden Gate Bridge!” Actually, it is supposed to resemble that, although it is even longer than San Francisco’s. It is actually the longest central span in Europe!

Another important landmark to see is the Belem Tower, which I unfortunately only saw from afar. We were sort of too tired to walk further down to visit this fortress. It was built in 1515 to guard the entrance to Lisbon’s harbor and is very important to Portugal during the Age of Discovery. It was often the starting point for sailors going on voyages.

Belem is definitely worth visiting, given it’s only 15 minutes by tram. You’ll be able to walk through most of these landmarks in an afternoon if you don’t visit any other museums. A beautiful relaxing area to be on a nice sunny day!