Another restaurant C recommended was Can Culleretes. It’s a family run restaurant that began in 1786, hence it’s listed on the Guinness Book of Records to be the oldest restaurant in Barcelona. Pretty neat, and the architecture itself is pretty cool. It’s also easily accessible for tourists as it’s just off the street of La Ramblas near the KFC near the Liceu metro station.

There’s paintings all over the walls. Apparently, this was also the restaurant where Gaudi would come once a year to dine at. He didn’t normally dine out otherwise. 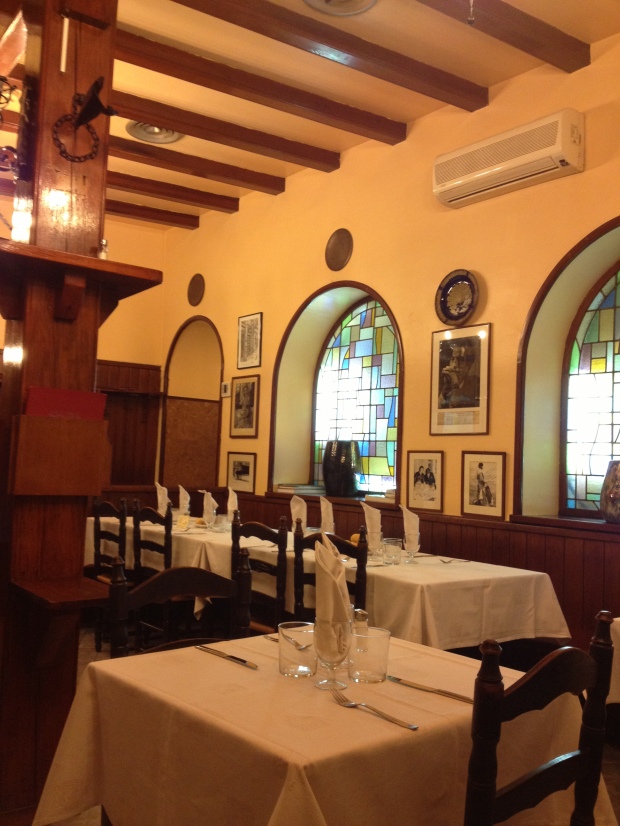 The atmosphere is very traditional and the waiters and waitresses are all dressed in uniforms. The restaurant was quite empty at first since we arrived before they opened and there were some other diners waiting outside as well. You need reservations here and often a week in advance. Shortly after, the restaurant was filled.

The whole atmosphere of the restaurant was just traditional but filled with art.

Of course, we started with a pitcher of Sangria. I thought this was stronger in alcohol than typical ones. Not as watered down for sure.

We shared most of food in order to try everything. We began with an Assorted Seafood Platter. The seafood was all steamed and came with mussels, clams, prawns, and what I think were crayfish since they were much smaller. I thought this dish was just okay. It was sort of bland and basically only required the seafood to be fresh and steamed.

Cannelloni with Spinach and Cod Fish

Can Culleretes serves traditional Catalan cuisine, and one popular dish is the Cannelloni with Spinach and Cod Fish. Cod seems to be widely popular in Spain and Portugal, hence you’ll find it at most restaurants. I absolutely loved this dish! It was super creamy and filled with tons of spinach. The cod on the other hand was difficult to really taste as the cheese and spinach flavours covered it.

The Catalan Suckling Pig was basically what we came here for. C had previously dined here and said this dish was amazing. I’d be honest and say that all the other dishes were just alright in my opinion and I probably would not visit the restaurant again if I’d be dining on those. However, this Catalan suckling pig is a must order and I would come back for just this dish. The skin is roasted to a light crisp, and there is a thin layer of fat with the meat being extremely tender. i liked this since the little hint of pork fat made the dish so much more satisfying but it wasn’t gross like some porchetta which has too much fat. The sauce also made the dish perfect. It was slightly sweet and had dates and other dried fruits. When you soak your meat in the sauce, it’s just perfect!

The Chicken with Ratatouille is also known as the Pollo Con Sanfaina. It’s basically the Catalan version of the traditional French dish. The ratatouille was made with lots of tomatoes, garlic, onions and peppers. They used drumsticks for the chicken and they were soaked in the vegetable sauce, so very flavourful. However, I didn’t find this dish any amazing. 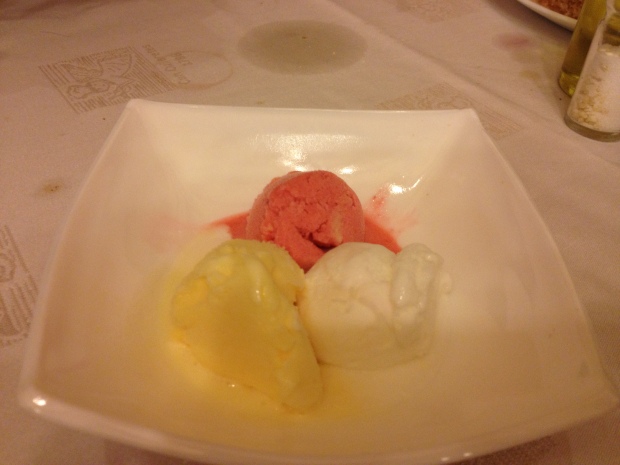 For dessert, we had the Mixed Sorbet. This was very smooth and was very refreshing.

Another dessert we had was the Whiskey Tart. It was basically like an ice cream cake with a few layers of sorbet and mixed with a hint of whiskey flavour. Not bad!

All in all, Can Culleretes is a decent place to visit for traditional Catalan cuisine. I would suggest getting the Catalan Suckling Pig and the Spinach and Cod Cannellonis. Other than that, the items I had tried were just average. Prices were also on the expensive side. I still think it’s pretty cool to say I’ve dined at Barcelona’s oldest restaurant though!