La Pizza del Born was recommended by my Spanish professor, so I decided to go there for a quick lunch with N. The Born district is pretty cool and attracts the young and hipster crowd. There are tons of trendy fashion and art boutiques and the area generally has less tourists. I actually found the area more upscale too. At night, the bars in the district are filled with young people.

Anyways, La Pizza del Born is located right on Passeig del Born so extremely easy to find. They offer a large variety of pizzas, which I believe are Argentinian style. They keep their different varieties of pizzas behind the window and reheat them up when you order. Or if you’re lucky, you’ll get ones right from the oven. They claim to have over 20 different varieties and just from the window, it was already difficult to decide which one I wanted! They also have pastas, empanadas and tons of different beverages.

There’s sit in at the shop, and although it was completely filled when we got there, we quickly found a spot. The turnover is quite quick since most people eat and go. Every item is quite affordable with a slice of pizza for 1,90 euros. However, during lunch, they have a special deal where it’s 3,90 euros for 2 slices of pizza and a beverage! Perfect for students on a budget. 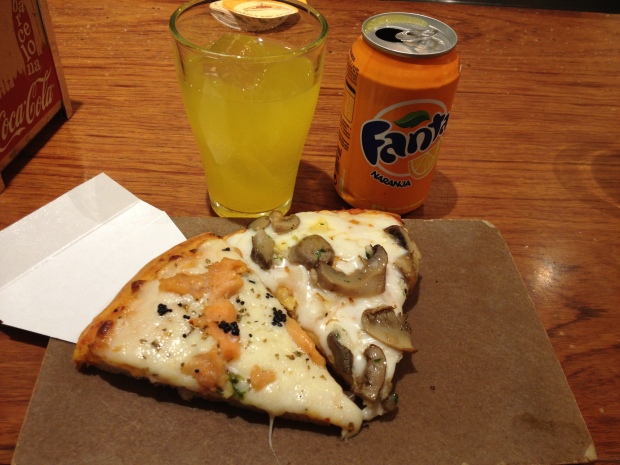 So here is what I got. A slice of Smoked Salmon with Caviar Pizza and a Mushroom Pizza. For my beverage I got a can of orange Fanta. The slices look quite tiny, but they are a medium thick crust. The dough is extremely soft and fluffy. I believe it was more like a focaccia pizza than typical American pizza. It was topped with tons of cheese and there was a decent amount of toppings. I liked how they had toppings like smoked salmon which wouldn’t be widely found in North America. Since the dough and crust are thicker, two slices will get you decently filled.

After the pizzas, we walked to the Mercat del Born, which was built in 1878. This was actually the main wholesale market in Barcelona, but it was shut down in the 1970s. I learned in my history class that around 10-15 years ago, they decided it was time to change this building up and put it to use. They decided to change it to a library and while they were preparing the foundation of the building, they dug the grounds and realized the ruins of the La Ribera neighbourhood. La Ribera basically means “The Shore” and they basically found the neighbourhood of the Medieval times. Since it was so important as the ruins show what life would have been like back in 1700s, including 1714 which dates the fall of Barcelona and the end of the War of Spanish Succession, they kept digging to reveal the rest of the neighbourhood and have now changed this to a museum. You’ll get a sense of what the houses looked like back then, and this floor view is free to the public. If you want to actually go down and see the ruins, then you’ll need to pay a fee.