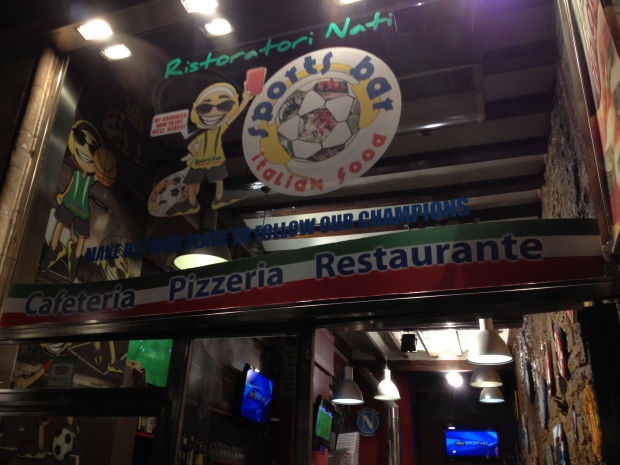 Exchange was wrapping up and many of my newly made friends from all over the world had made traveling plans. We soon realized that although we would still be somewhere in Europe, it would be our last time seeing each other. Well until we meet again somewhere in the world! We quickly organized a dinner with some of our closest friends, and T suggested we go to Sports Bar Italian Food. I was skeptical at first when I saw the outside, but it’s actually rated very well on Tripadvisor and didn’t fail to impress us! The atmosphere is friendly and not exactly like a sports bar, although they have TVs to watch sports on. It’s Italian owned, and the owner was super friendly and funny.

They have a pizza oven just like how they do it Naples, except this one is shaped as a soccer ball! How cute! 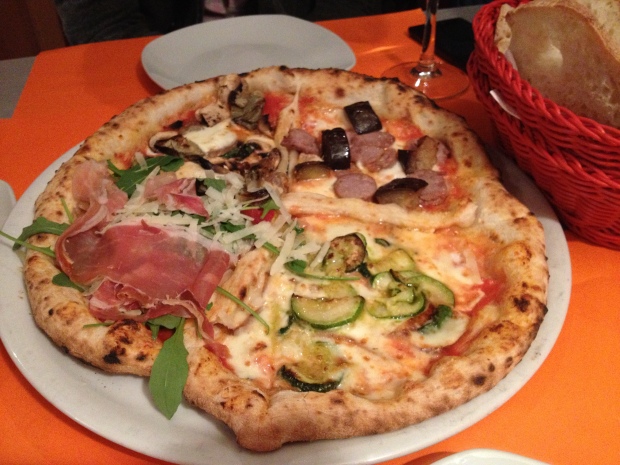 We had taken a look at the menu and knew we wanted some pizzas and pastas to share, but were indecisive about which ones to get. The owner came by and basically asked if it would be okay for him to just pick and choose customized items for us and it would be enough to get us filled. He came back with these pizzas that basically had 4 different sections of toppings. This was pretty good since we were able to try a bunch of different flavours! Since there were only around two slices for each flavour, we weren’t able to try them all. Some of the toppings were eggplant, zucchini, prosciutto, and mushrooms. The pizza was fluffy and I liked how it was pretty thin. Not exactly thin crust, but I liked this thickness. 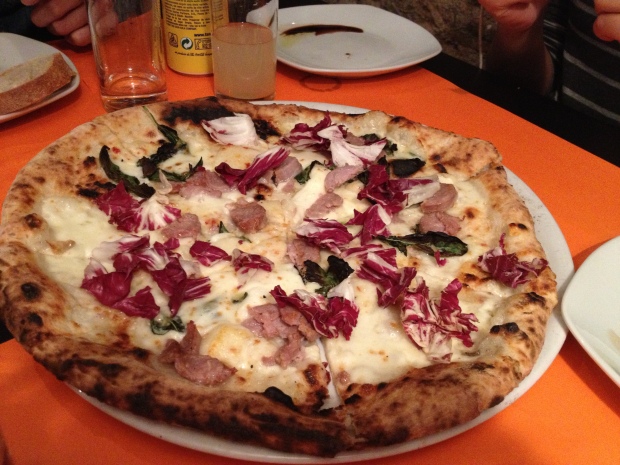 He also made one that was all the same toppings. This one had a red cabbage, some pork and filled with tons of cheese. I’ve never had red cabbage on my pizza before, but it actually tasted really good! Love how it was really cheesy.

Then for pastas, we had the Seafood Spaghetti. The spaghetti was very thick, but it was cooked to al dente, so had a great chew to it. I know that true Italian pastas normally don’t have loads of sauce on it, but I wished this one had a little more sauce. I found it a little bland. There was an abundant of seafood though, including clams, squid and shrimp.

My favourite was the Mushroom Ravioli. It was very saucy and creamy with loads of mushroom. The flavour of the sauce really made the dish good. The pasta was also very fresh and each ravioli was stuffed with a good amount of cheese.

Some of our friends wanted to try the Rigatoni, since the pasta are shaped with large hollow holes so it’s sort of like a tube. I find that this type of pasta needs a lot of sauce or else it tastes like you’re just eating dough. This dish did have more sauce than the spaghetti, but could still use a bit more. It was a tomato base with Parmesan at the top.

For dessert, we shared two desserts. First we got the Homemade Tiramisu. It didn’t look any good, but it tasted amazing! Tons of mascarpone cheese and a hint of alcohol. Cream and topped with chocolate powder. Everyone enjoyed it! 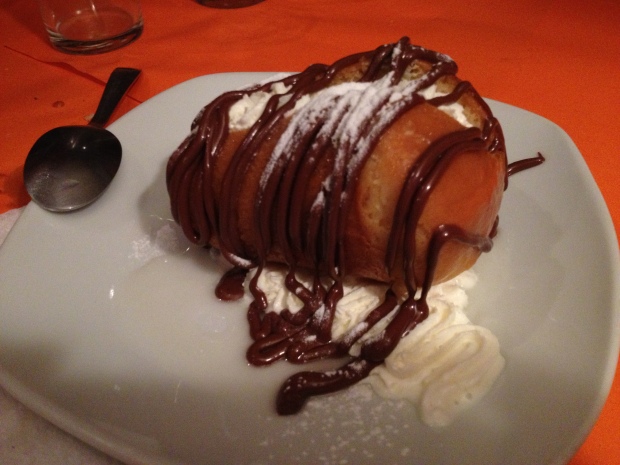 He also suggested that we try this Italian Donut dessert. It was filled with cream and topped with chocolate sauce. It was quite sweet, so sharing this was a good idea. Not bad!

All in all, Sports Bar Italian Food had some pretty good Italian dishes. I thought the pastas were just average, but the pizzas were definitely really good! People even say it compares to the ones in Naples! I really liked how they were able to customize our pizzas and really helped with our orders. Service was really good and prices are quite reasonable. There weren’t too many people in the restaurant, so we were able to just stay and chat for a long time.