Our second day in Busan would also be our last full day, so we headed out early to try and hit up most of the tourist spots. For breakfast/lunch, we wanted to try the famous Dwaeji Gukbap, which is also known as pork soup and rice. Busan prides itself to have the best of this soup and there is even a street in the Seomyeon district that is filled with shops selling this soup. We headed there and just chose a shop. After placing our order, they brought us a huge dish. At first, I thought they were appetizers to eat, but we later figured out that you should put this into the pork soup. We didn’t end up throwing all these things in, since we weren’t sure. We did however throw the fermented baby shrimp in, which was quite interesting. It brings a bit of saltiness to the soup.

And the Dwaeji Gukbap arrived! The broth is a milky colour due to hours of boiling pork bone. You’ll find slices of pork shank and green onions in it. The soup is light but full of flavour. Super homey and is perfect on a rainy day. You are also supposed to put your rice in, but we didn’t know until later. Even just by drinking the soup on its own was absolutely delicious. I would say it’s one of my favourite Korean dishes! A must try in Busan!

We also added a Gamjatang, which is a very popular Korean dish. I’ve tried it in Vancouver as well, but I found the broth to taste a little different here. Gamjatang is a soup made of pork spine, vegetables, green onions, and hot peppers. It comes sizzling on a hot pot to keep the soup hot. The soup is quite spicy, and is absolutely delicious with rice. It came with potatoes, enoki mushroom and other green veggies. The pork spines have bone marrow in it which is supposed to be really good for you. There’s surprsingly quite a lot of meat hanging on the bones, so you actually get very full. However, I still favour the Dwaeji Gukbap over this one.

After lunch we headed to the Nampo-dong area. Nampo is famous for shopping, but nearby, you will also find BIFF or Busan International Film Festival. The festival is held in October and is one of the largest film festivals in Asia.

Obviously the festival wasn’t happening when we were there, but you can still see something similar to the Hollywood Walk of Fame.

There are also various food stalls with long line ups. Food looked pretty good! We were all still full from lunch though. 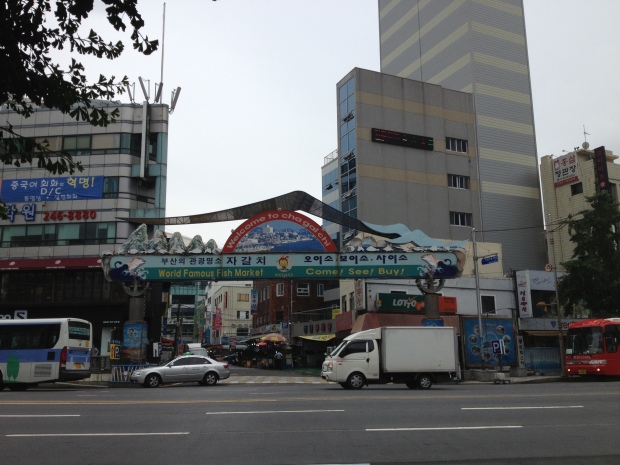 Also within walking distance is the Jagalchi Market. It is the largest seafood market in Korea and is a top tourist spot in Busan. There are many restaurants here who will cook your seafood right away for you.

There is an outdoor market area as well as an indoor one. We took a peak in the indoor market and the floor was all wet and it smelled really fishy. We didn’t feel like going in, so we headed over to the outdoor market. The stalls sell a variety of seafood, from shellfish to prawns, crab, and fresh fish.

I think the most impressive part of the market were these huge octopi. Pretty much every stall sold octopus. They are ginormous! I believe you can also eat raw octopus here. They are supposed to suck on your tongue and lips, so you need to chew very quickly! I saw some that had been cut into bits already, but they are still squirming! Crazy… As a foodie, I should’ve probably tried it, but I just couldn’t… However, my Korean friends said they are really good and a delicacy!

Overall, Nampo is definitely worth checking out! Plus, you can check out BIFF and Jagalchi Market at the same time!