It’s Dine Out Vancouver Festival time again, and this year, I suggested we try Merchant’s Oyster Bar. Located on Commercial, it’s where the rest of the hipster food spots have opened up. The restaurant is pretty dimly lit, so I’ve never even noticed it. The restaurant has a bar table, but also dining seating. It’s rather dim, but very casual at the same time. 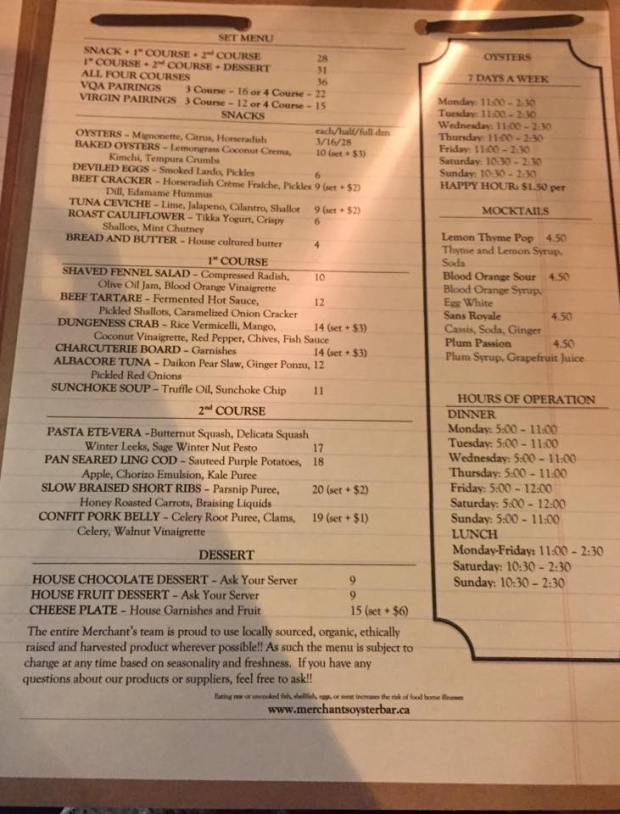 Online, we found the Dine Out menu to be $28, with three savoury dishes. Sort of the reason why I chose this, and also because they had oysters! However, upon arriving, their menu also featured a 4 course menu for $31, which included desserts. The desserts didn’t like anything too special, so we all opted out. They also have wine and non-alcoholic pairings.

MW went for the Scandal Lager, which came in a really cute bottle. So hipster.

The first dishes are “snacks.” MH went for the Tuna Ceviche, which came on top of an endive This gave it a good crunch, but we could barely taste any tuna. The ceviche was seasoned with lime, Jalapeno, cilantro, and shallots, but we all agreed that it tasted too much like the herbs. Quite disappointed with this one. 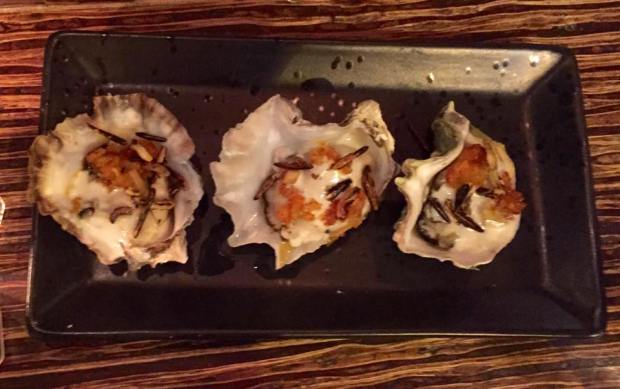 IC went for the Baked Oysters, which again came in a set of three. They were seasoned with lemongrass coconut crema, kimchi, and topped with tempura crumbs. I didn’t try this, but she said it was very good. 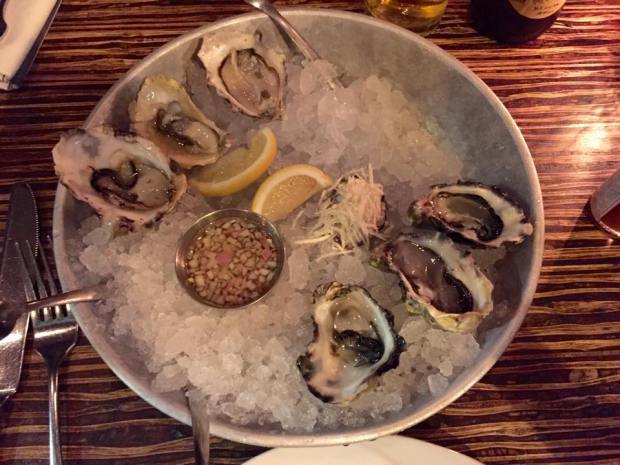 MW and I went for the Oysters. Each diner gets three oysters each, and they brought us two types. One was the kusshi, and I could nto remember the second. It came with mignonette, lemon and horseradish for seasoning. There was also Tabasco sauce to give it some spice. The oysters were tiny, but extremely sweet and fresh. Definitely satisfied my oyster craving. 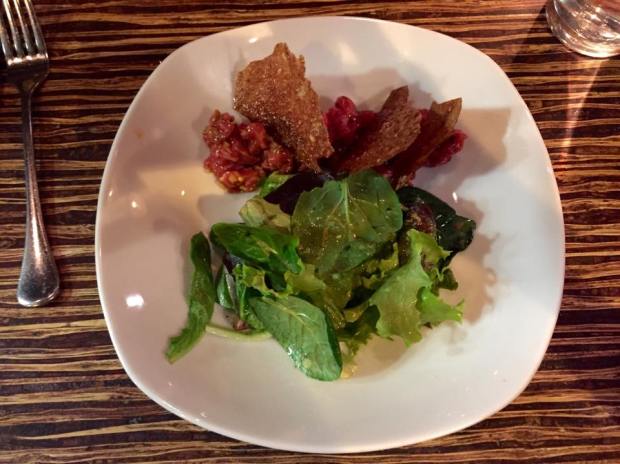 For my first course, I chose the Beef Tartare. The raw beef was chopped up and seasoned with a fermented hot sauce and pickled shallots. Accompanying it were caramelized onion crackers. I was disappointed with this as the beef was rather flavourless. I could barely taste the hot sauce. Without the cracker, the beef would have been very bland. Raw beef needs lots of seasoning or else it doesn’t taste good. It also came with a side of salad with a basic vinaigrette and olive oil dressing.

IC got the Sunchoke Soup, which had a very thick consistency, which we all enjoyed. You could also taste a hint of truffle oil and the soup came with some Sunchoke chips.

MH got the Albacore Tuna, which came with a daikon pear slaw, ginger ponzu and pickled red onions. I thought that the tuna would be more like a tuna tataki, where it was lightly seared but raw inside, but it was actually fully cooked. I found it to be overcooked, but the daikon pear slaw made the dish really good since it was sweet and crunchy.

IC got the Slow Braised Short Ribs, which came in an interesting presentation. I found the veggies to be plated quite oddly. The short ribs were very flavourful and the meat was extremely tender. It came with some parsnip puree, honey roasted carrots, and braising liquids.

MH got the Confit Pork Belly, which was rather a small piece. A good proportion of fat to meat and you really didn’t need to chew much since it was so soft. It came with a side of celery root puree, clams, celery, and a walnut vinaigrette. 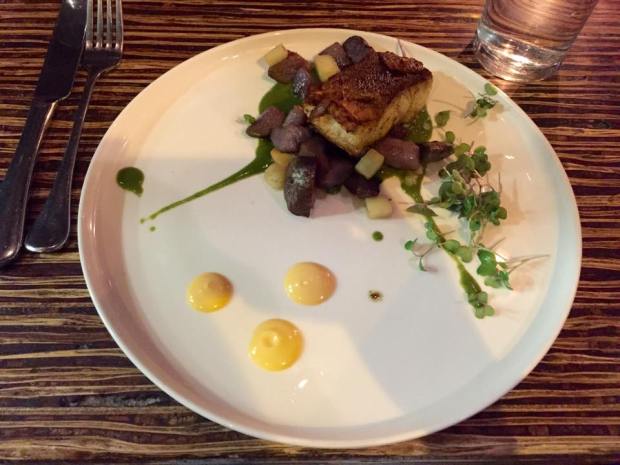 For myself, I got the Pan Seared Ling Cod, which was moist in the inside and was seared until there was a crispy skin. It came with some sauteed purple potatoes, apple chorizo emulsion, and kale puree. My favourite was the apple chorizo emulsion, which are pictured as those yellow drops. The sauce was so intense with the smokey chorizo flavour and paired great with the fish.

Pros:
– Reasonable prices for the type of food you get
– Ambiance is chill and great to hang out

Cons:
– Food is good, but not nothing too memorable
– Service is average