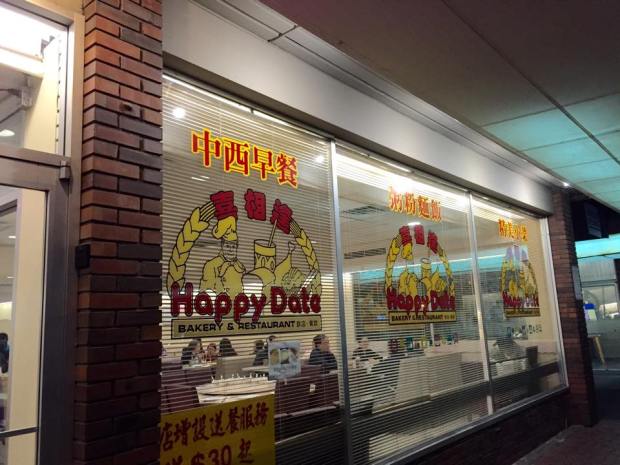 Happy Date has been around for a long time, and they are famous for their pineapple buns and HK style food. Not the best looking on the outside and inside, but they are known for great food. My mom told me that they now serve Chinese dishes for dinner time, rather than just the HK style food during lunch, so we decided to go give it a try. The restaurant is packed inside and surprisingly, it has been renovated and is decent looking. Nothing special, but it was clean.

They have a few set menus for dinner, including lobster or pigeons. We went for the Pigeon Special Set Menu, which came with two crispy pigeons and your choice of 3 dinner dishes served with soup, rice and dessert for $69.88. First up was the soup, which had meat and vegetables. Your typical home-made soup which had been boiled for many hours.

Then came the feature of the set menu. You can choose more or less pigeons depending on how large your group of diners are. The choice of dishes increase when you add more pigeons as well. We went for two pigeons, which was more than enough. Everyone had around 2 pieces to eat. We found that the skin could have been more crispy though. Flavourwise, I liked how it wasn’t overly salty.

With our set menu, you can then choose three dishes from a long list of choices. We chose the Pork Chop with Honey and Peach Glaze, which ended up being a huge dish! It was definitely glazed with lots of sugar, since the honey was very apparent. The pork chop was deep fried, but we all found it to be just average. The batter was sort of too thick and I found it to be too sweet.

Vegetable and Bean Curd with Lettuce

The second dish was the Vegetable and Bean Curd with Lettuce. This came in a fish broth, which I found to be too milky for my liking. The veggies were fresh, but other than that, nothing too special. Your typical veggie dish.

Lastly, was the Deep Fried Chicken with Fish Sauce. The skin was crispy, but didn’t seem to attach to the chicken itself. The chicken was moist and seasoned well, and I liked the fish sauce that came with it. Not bad.

Overall, Happy Date was pretty average to me. Good prices and large portions, but I wouldn’t say the food is too memorable or above average. Service was also very friendly, and it’s honestly pretty clean although you shouldn’t expect much ambiance here. It’s super basic and simple, but somehow still attracts all these diners!