NOTE: As part of the ChineseBites media event, all food and beverages were free, but all opinions are based on my own experience.

Lin Chinese Cuisine and Tea House is just a few blocks down from my office on West Broadway and we usually order take out here during busy season. From my previous experience, it wasn’t exactly the greatest, so I was curious to see what there was to offer during the ChineseBites media event.

The restaurant was bustling when we arrived around 6:30pm and had a good amount of traffic the whole time. Ambiance is quite average.

We started off with some cold appetizers. First up were the Marinated Gluten Curds. These were served cold and consisted of bean curds and black fungus. The flavours were quite good and not overly salty.

Another appetizer was the Smoked Fish. This again was very flavourful and I liked how it was still relatively moist inside.

The last cold appetizer was the Shanghai Vegetables with Pressed Tofu. The server told us that this is a very popular Shanghainese dish. I thought this would go quite well with rice.

Next up were the table’s favourite Xiao Long Bao. You can watch the chef make these fresh behind the glass. These were rather small and left us wanting more. Soup was delicious and the wrapper was thin.

The Chef’s Special Supreme Hot Pot Soup is apparently a great dish to eat with your whole family since each ingredient has a meaning of the family being united and together. The pot was filled with huge meatballs which were extremely juicy, as well as potstickers, noodles, and various other dumpling like items. Great to have during the cold winter season. 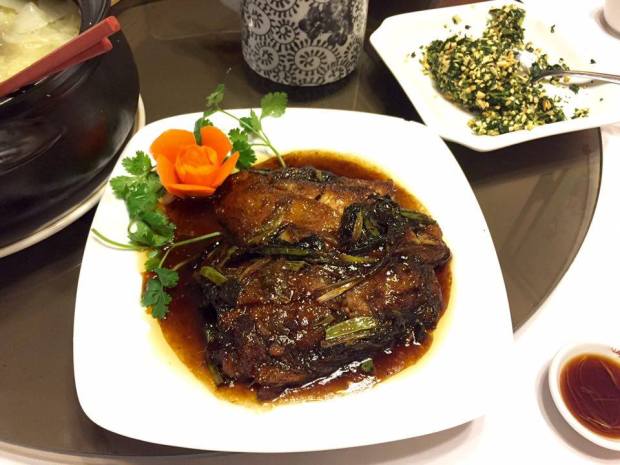 The Green Onion Halibut had a delicious sauce. The only complaint I had were the amount of bones in it since I’m not fond of picking the bones out in my fish. Otherwise, a very tasty dish.

Another favourite was the Braised Pork Ribs which is in a sugary syrup sauce. If you love sweet dishes, this is great for you. It didn’t taste very healthy but the meat was so tender it just fell off the bones. Yum!

My favourite of the night were the Honey Prawns. Again, this is a rather sweet dish, but I loved it. The prawns were huge ad lightly battered and then deep fried. They were then covered generously in a honey sauce.

The Tea Smoked Duck was served with little Chinese buns on the side. However, since the duck still had bones in it, it was rather hard to eat along with the buns. As well, I found the duck to be on the salty side. Still, the skin was crispy.

A filling dish was the Shanghai Vegetable Rice Cake. I believe the veggies were the same that was used in the cold appetizer. The rice cakes had a nice chew but were still very soft. Quite good.

Another favourite of mine was the Shanghai Spicy Tofu Hot Pot with Seafood. This actually reminded me of a Sze Chuan dish instead. The prawns were large and the soup was flavourful with some heat. I could eat this with rice all day.

To wrap up our dinner, we were served the Eight Treasure Sweet Sticky Rice, which seems to be the given dessert at any Shanghainese retaurant. It was filled with red bean paste and various candied items (apparently 8 items). It was alright, but I found it rather sweet and I guess I’m just not a fan of this dish in general.

Overall, I was quite impressed with the items I tried at Lin Chinese Cuisine this time around. I didn’t know the chef is Shanghainese, so apparently their top items are actually the Shanghainese dishes. I feel like I’ve been getting the more Cantonese style dishes here which do not seem to live up to the prior. Will definitely be giving these items another try again during my busy season coming up!