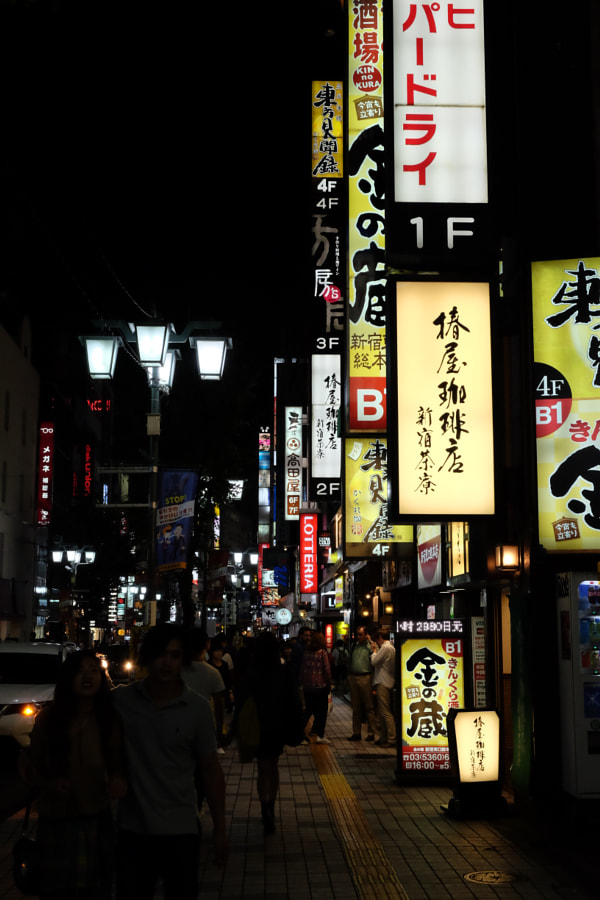 While we were on the train heading back from Hakone to Shinjuku, I decided to look for a place to eat dinner. Did some searching and ended up coming up with the idea to go check out an all you can drink spot. Actually, I was craving yakitori (Japanese grilled skewers) and this spot just came up. Yakitori Marukin is located just in the busy streets of Shinjuku and is popular among locals. 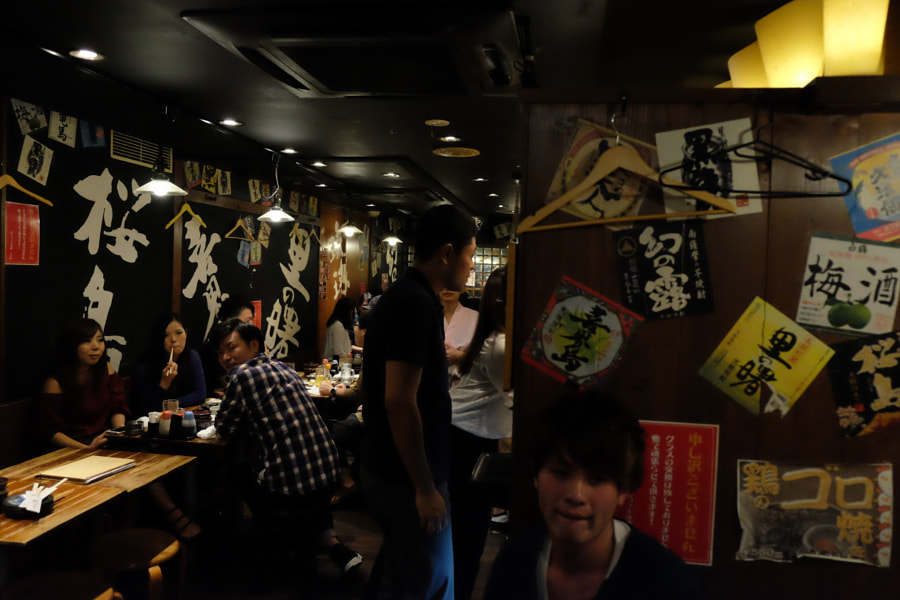 It took a while to find the place because you actually needed to take an elevator upstairs. Actually, many of the good restaurants are often upstairs, so if you’re looking for food in Japan, look up! Anyways, the restaurant was filled with locals and when we arrived I think we got some curious looks. The staff could barely speak English but they were still very accommodating and welcomed us in. Luckily, they have an English menu, so I’m guessing they have a lot of tourists here still. With some pointing and nodding, we were good to go! 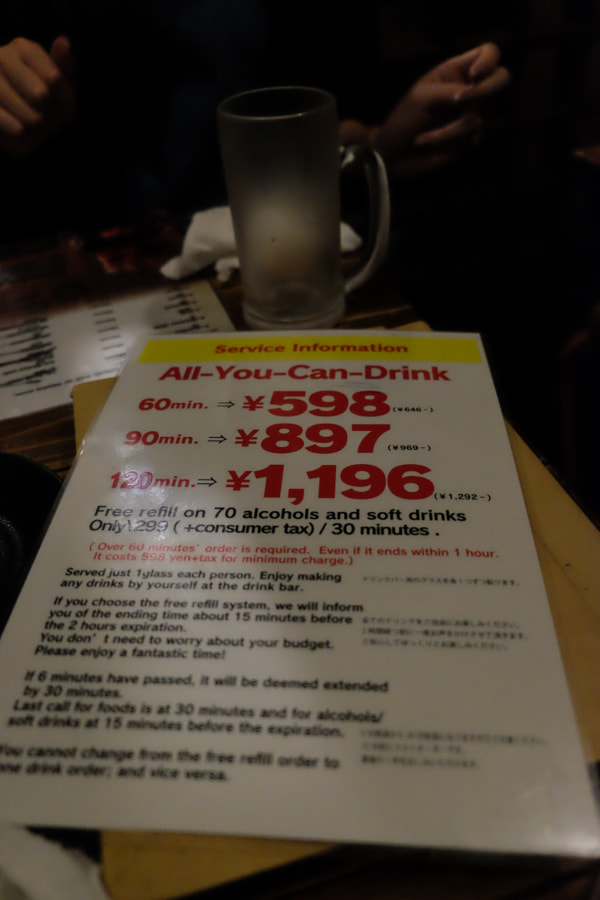 I read online that this may be one of the cheapest all you can drink restaurants in the area. Plus, they have an English menu, so it really helps. For only 598 yen + tax, you can drink as much as you want for an hour! My understanding is that you need to do a minimum of one hour, but we chose to stay 90 minutes as it gave us more time to eat. Honestly though…that is dirt cheap! We can only get a beer…sometimes not even for this price back in Vancouver! 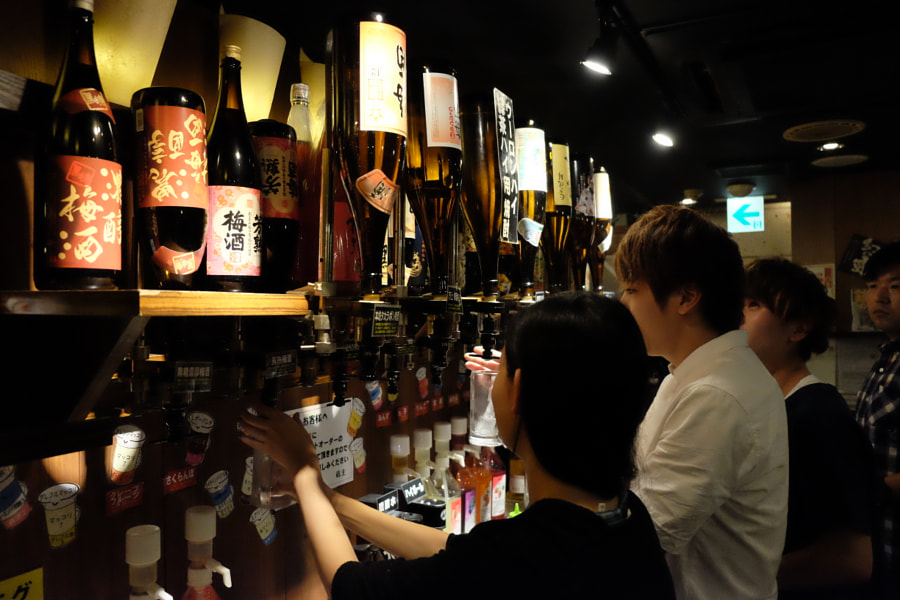 So when you think of all you can drink beer, you must be thinking that the restaurant will just serve your drinks super slow so that your time is up. Well, not a problem here, because it is self serve! I was pretty mind blown at this concept! Along a wall in the restaurant, there are a bunch of bottles that dispense your liquor. The waiter will give you a beer mug and you just head over to the drink station and fill it up with whatever you want. The majority of the drinks were sochu (tastes sort of like vodka), plum wine, and I believe there were some whiskeys. There are also flavoured syrups that you can pump into your sochu so that it’s not straight liquor and gives it some more flavour. I suggest filling only a quarter or half a mug each time so that you can try other drinks if that’s your liking. Otherwise, you’re sort of stuck with that drink until you finish it! This was seriously lots of fun and the liquor is quite high in alcohol content, so you will for sure have a good night! No beers here for you beer lovers though! 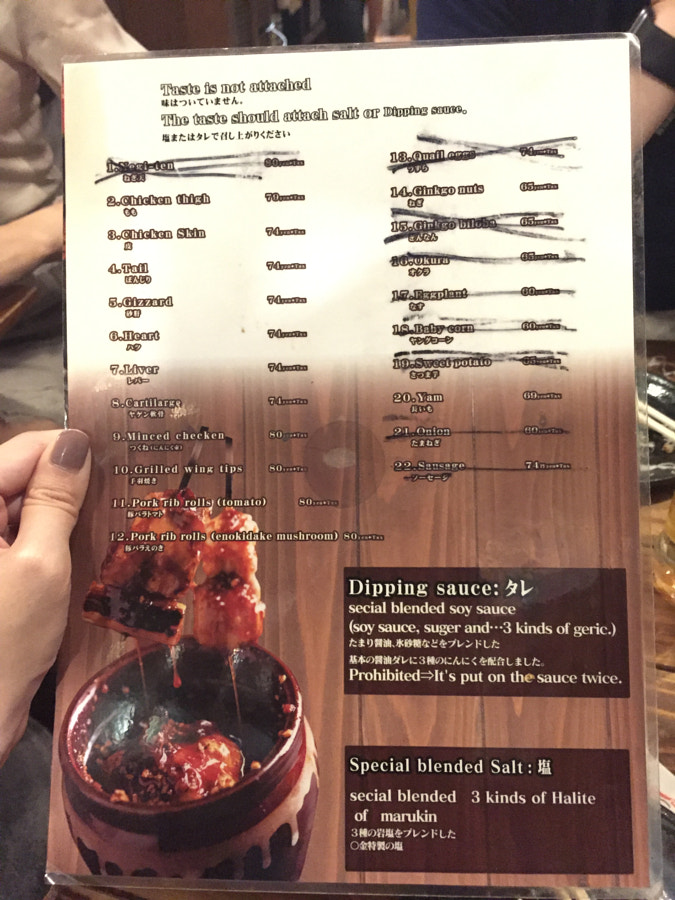 As for the food menu, they had one menu which listed all the yakitori items which had English on it, but there was also a menu for appetizers and other izakaya type food. Unfortunately, this menu was all in Japanese, but there are some pictures to help. As you can see, the yakitori is also relatively cheap here compared to other yakitori shops. The quality is not amazing, but it comes with this dipping sauce which is really tasty! There is a big jar of sauce on the table which is left there all night… Kind of sketchy since you have no idea if the previous diners did anything to the sauce, but they state on the menu that you are not allowed to dip your food in the sauce twice. Let’s really hope no one does that! 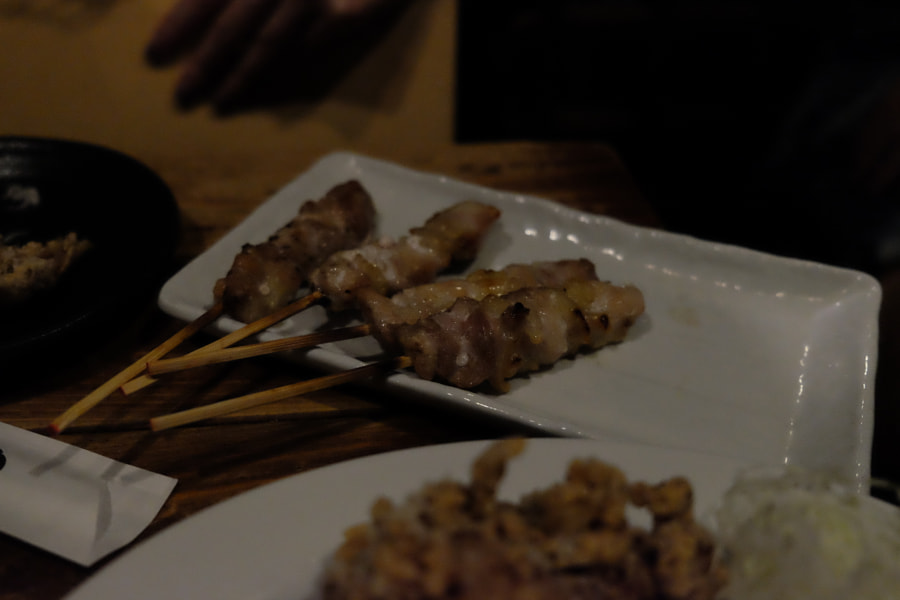 First up, we got the Chicken Thighs. Pictures are really dark as it was very dim inside, but these were definitely not as charred as I’d like. However, I really enjoyed the dipping sauce and when you’re a bit tipsy, anything tastes great! 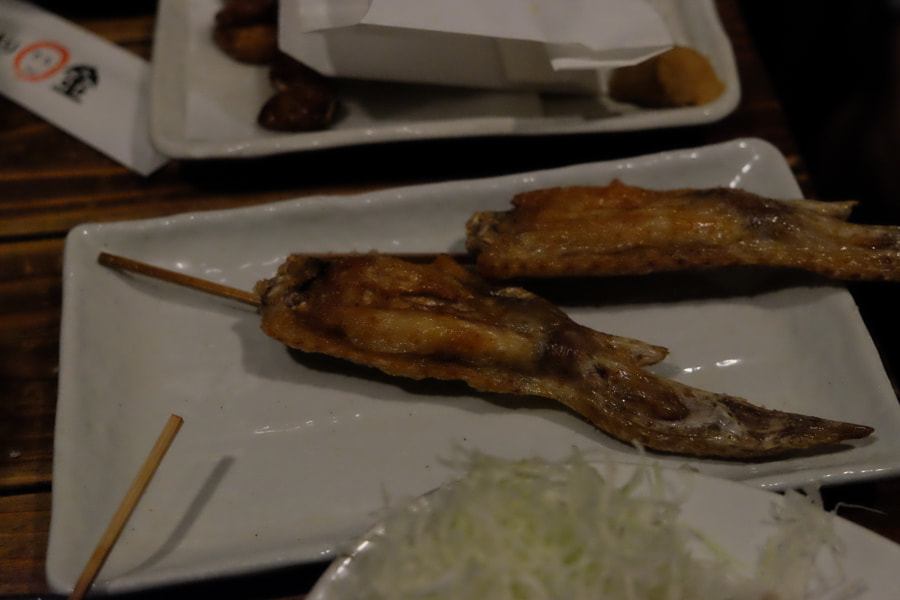 There were a lot of intestines for yakitori on the menu, so we weren’t really a fan of that. Instead, we decided to try the Grilled Wing Tip. This was not bad but a bit difficult to eat as there is not much meat. I would stick to the chicken thigh next time. 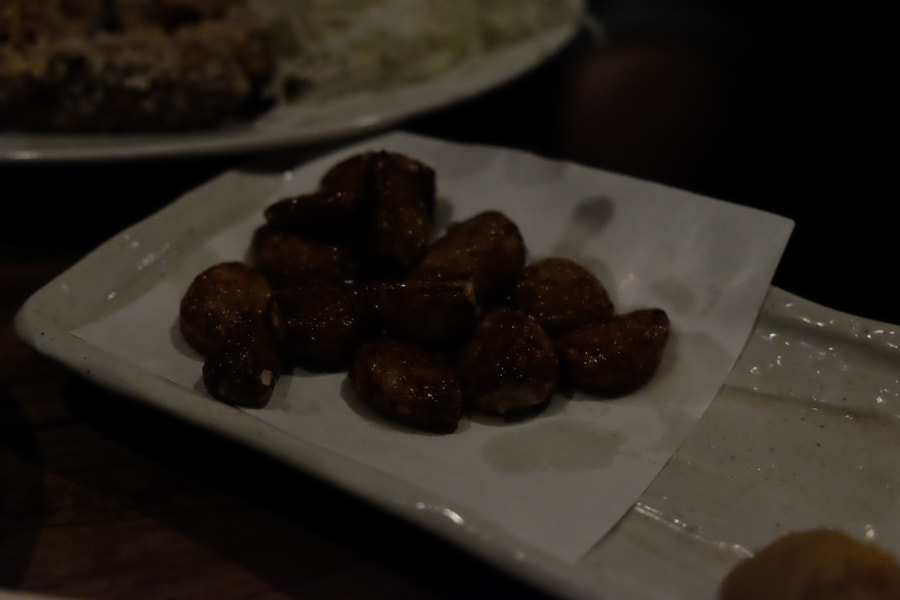 Then came the funny story… So we ordered off the all Japanese menu and I pointed at the picture thinking they were popcorn chicken. Turns out…we ordered a plate of Grilled Garlic! Yup…we did not finish this. 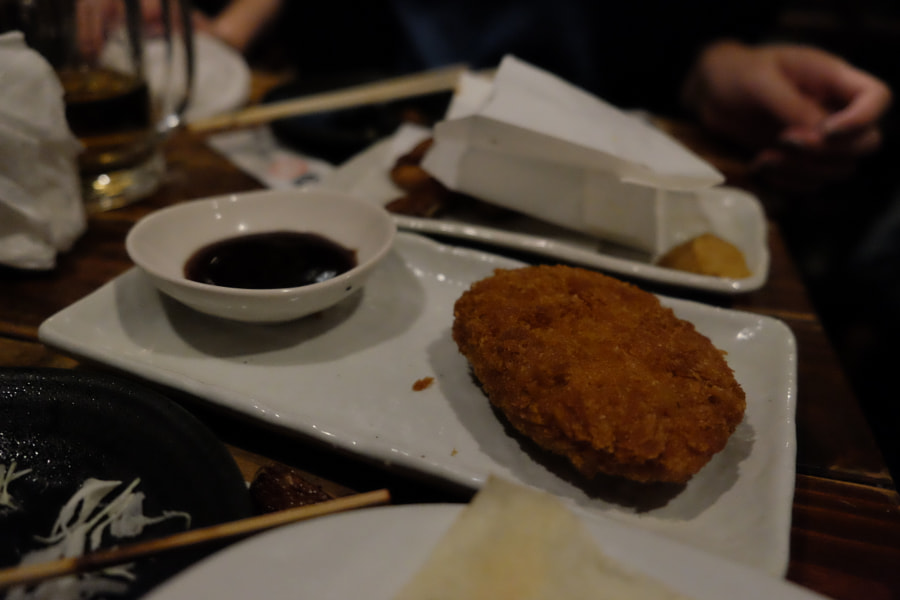 Some other appetizers included this Squash Croquette. This was really yummy! And great with drinks! 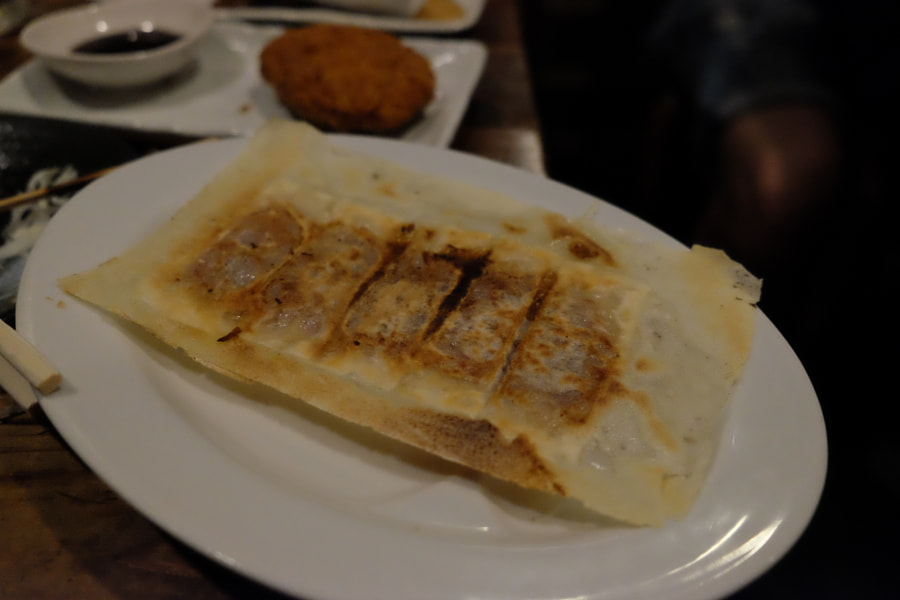 The Gyozas were also one of our favourites. I think we ended up with two orders of this! I love how in Japan, they cook all the gyozas together and the skin becomes super crispy. 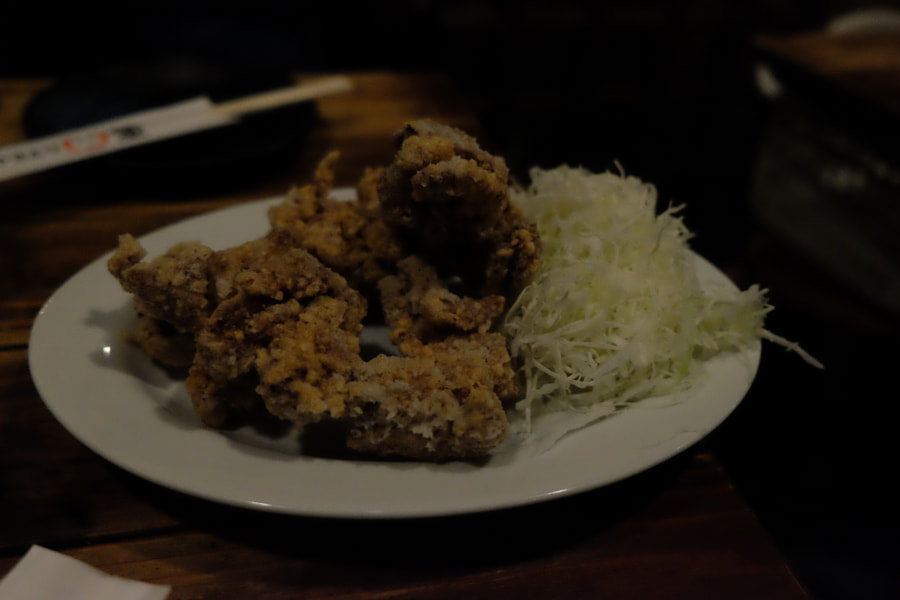 Finally… we got it right and ordered the real Chicken Karaage. Chicken was moist and batter was crispy. 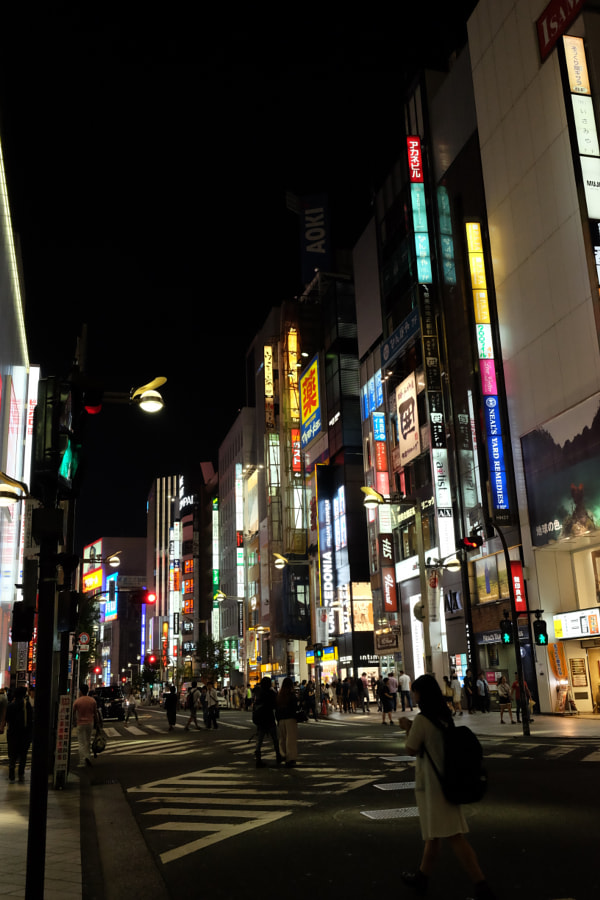 What a fun night at Yakitori Marukin! We probably spent around $25 each in total for the food and unlimited drinks. What a steal! After dinner, we wandered the streets of Shinjuku. It might have also involved taking some shameless sticker pictures… Last day in Tokyo next!