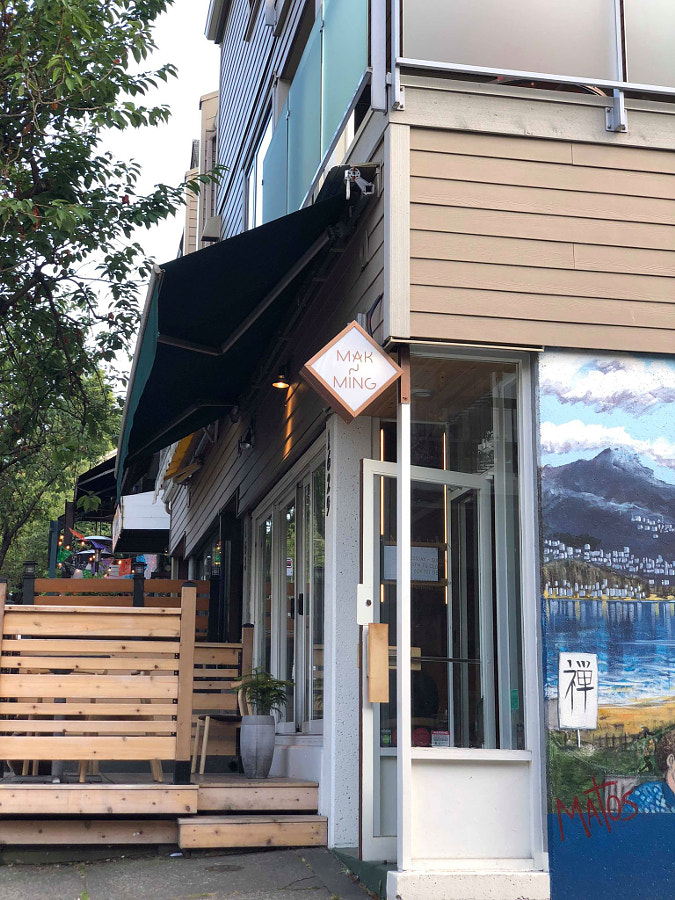 For J’s birthday this year, we went to Mak N Ming after hearing it won one of Canada’s best new restaurant awards. Located in the Kitsilano area, the restaurant what I’d like to think as Westcoast cuisine with twists from other cultures. One thing to note is that the restaurant only offers two chef’s menu during dinner time, so a la carte is not available. They have now expanded to offer brunch which is a la carte and the brunch menu is also much more affordable. 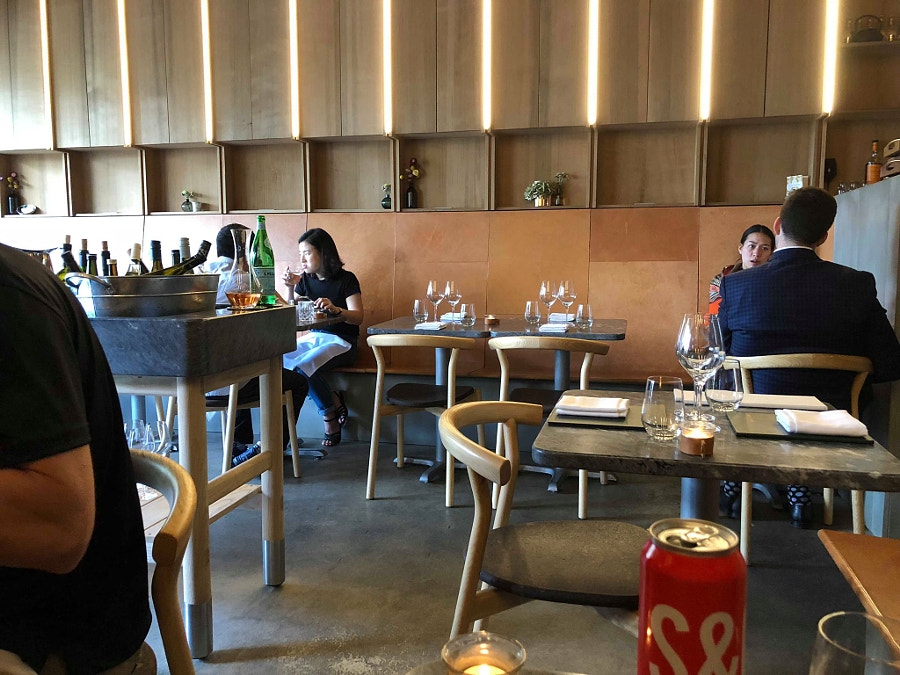 The interior is quite small and features a simple modern design. However, I thought the seating was bit uncomfortable as the seats were pretty hard. It was also interesting that they put all their wine in the middle of the restaurant, possibly because of limited space. As noted, there is a Demi Menu which features 4 courses for $54 and a Chef’s Menu which features 7 courses for $83. We opted for the latter. We ended up getting 8 courses in total as the cornbread seems to be in addition to the rest of the menu. 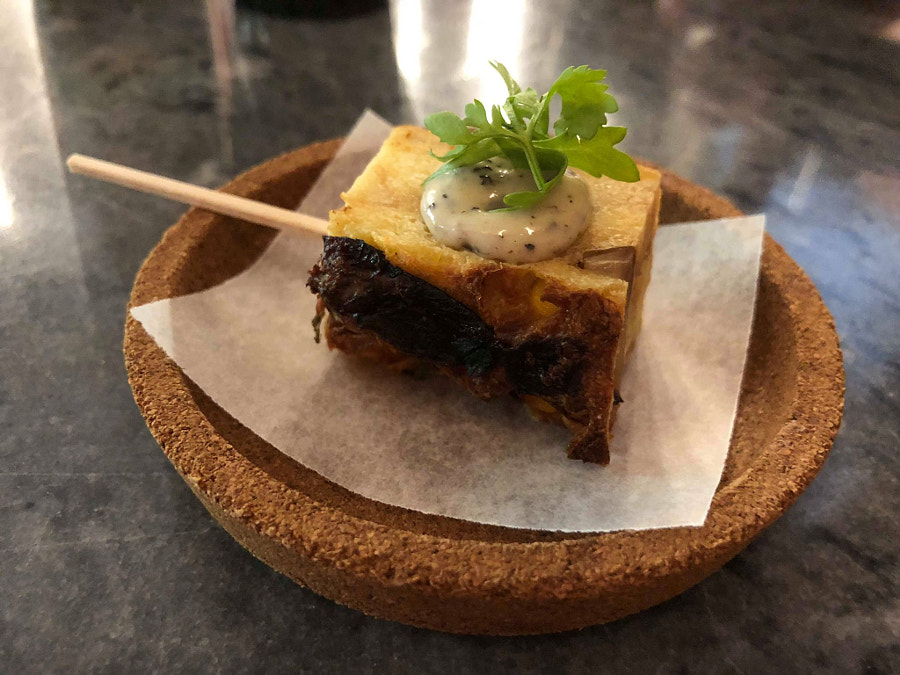 To start, the First Bite was a savoury bread pudding which had truffle, cheese, and anchovies. It sort of reminded me of an egg omelette but it was quite flavourful.

The next course, I forgot to take a picture of, but it was a Halibut dish featuring line caught halibut from Vancouver island and a beurre blanc sauce with radishes. 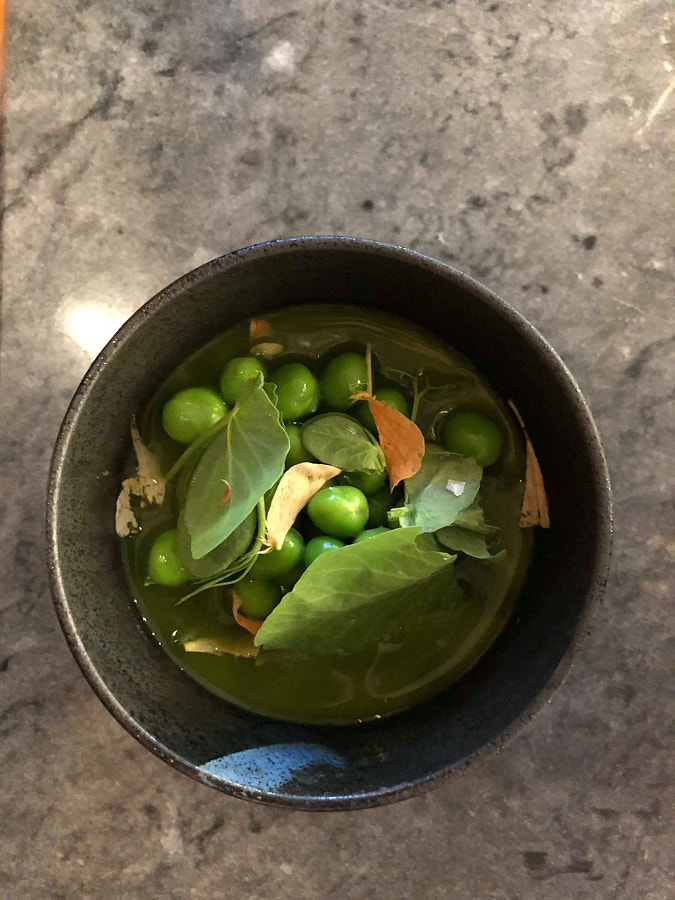 Next was the beautifully plate Chilled Sweet Pea Chawanmushi. I love chawanmushi at Japanese restaurants, so this was an interesting take to the classic dish. At first, I quite enjoyed the flavours, but after a while, I felt like the pea flavour was too much and getting really bland. Perhaps It was also because I personally don’t like to eat peas that much. I think I would’ve enjoyed it if they cut down some of the peas on top.

Another dish I forgot to take a picture of was the Cornbread with honeycomb butter. This was a very memorable dish as I typically do not enjoy cornbread, but it was surprisingly very moist. Paired with the honeycomb butter which was slightly crystallized, it was sweet and savoury. 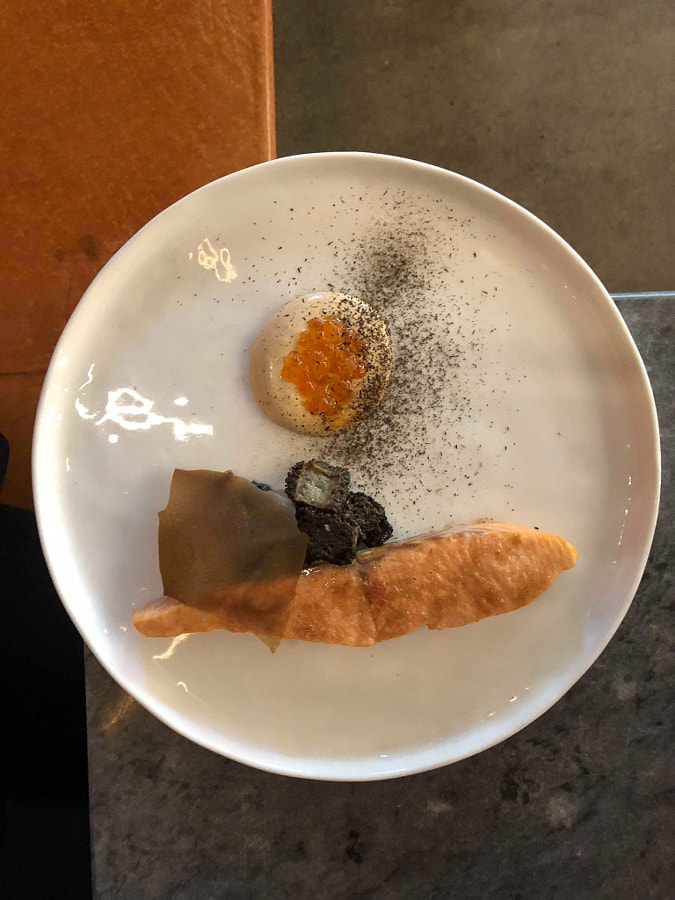 Moving onto a larger dish, we had the Wild Salmon with Morels which are these spongy type of mushrooms. The salmon was cooked perfectly as it was moist in the center and tasted great with the fish roe and cream. The shitake crisp which was on top of the salmon was interesting and you could taste that hint of mushroom flavour. However, I didn’t think it was really necessary as we ended up just eating it on its own. 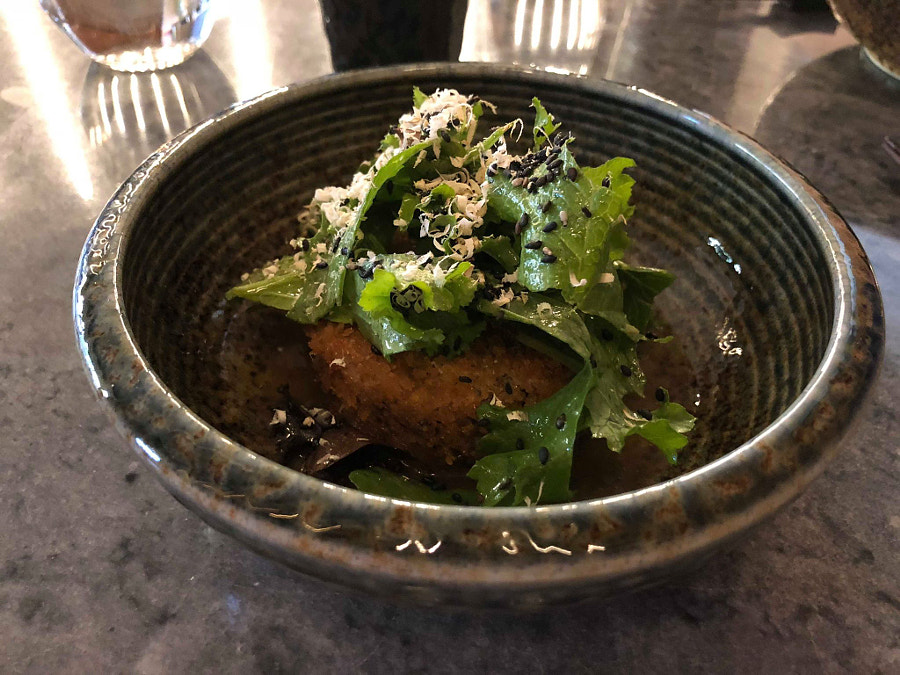 The last main was the Azuki Rice and Greens. The server poured a dashi stock in the bowl at our table. Azuki beans are mixed with rice and a small patty was formed and coated with some batter to deep fry. The dish was nice when soaked in the dashi stock to soften the rice as it was a bit chewier than regular rice. I couldn’t tell what the greens were, but they were extremely bitter if eaten alone. However, the bitterness magically disappears when paired with the azuki rice which was quite odd! 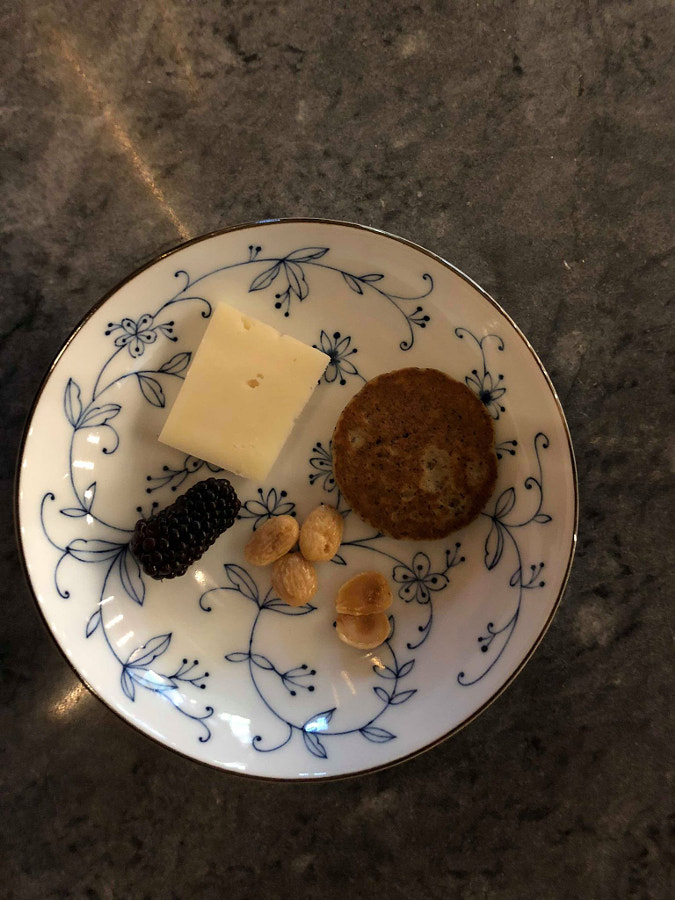 Moving onto dessert was a pretty underwhelming dish. This consisted of something similar to a buckwheat pancake, a slice of goat cheese, some nuts, and a blackberry. I just expected something that took a little more work to be made and thought this course was a bit random given the high price we paid. 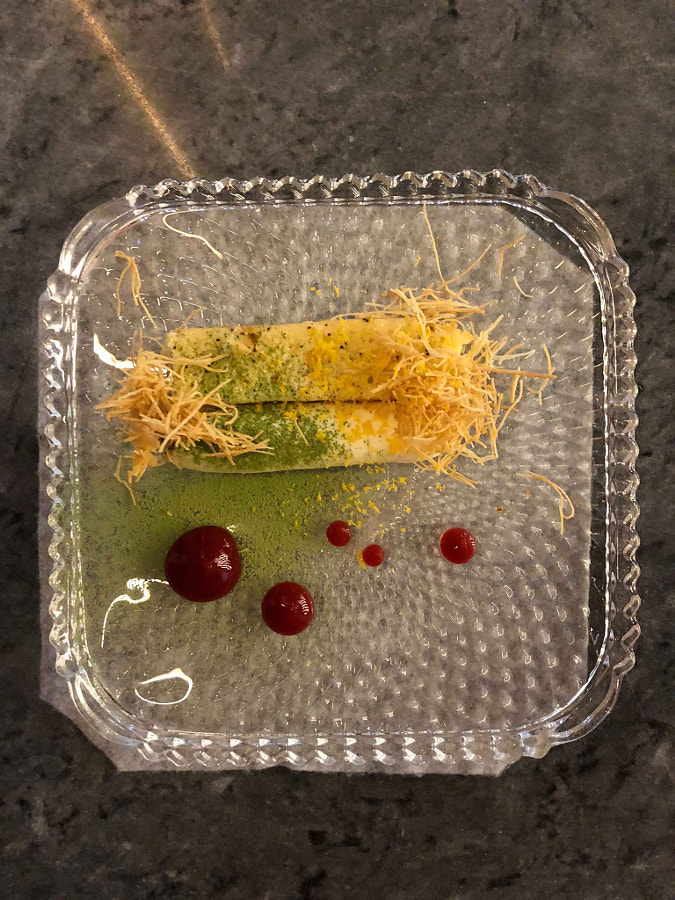 The dessert to end our meal was probably my favourite of the night. It was something similar to a cannoli and consisted of white chocolate, lemon, matcha powder, and hibiscus sauce. The dessert was light and not overly sweet. I also appreciated that the kitchen added the birthday message on my friend’s plate. 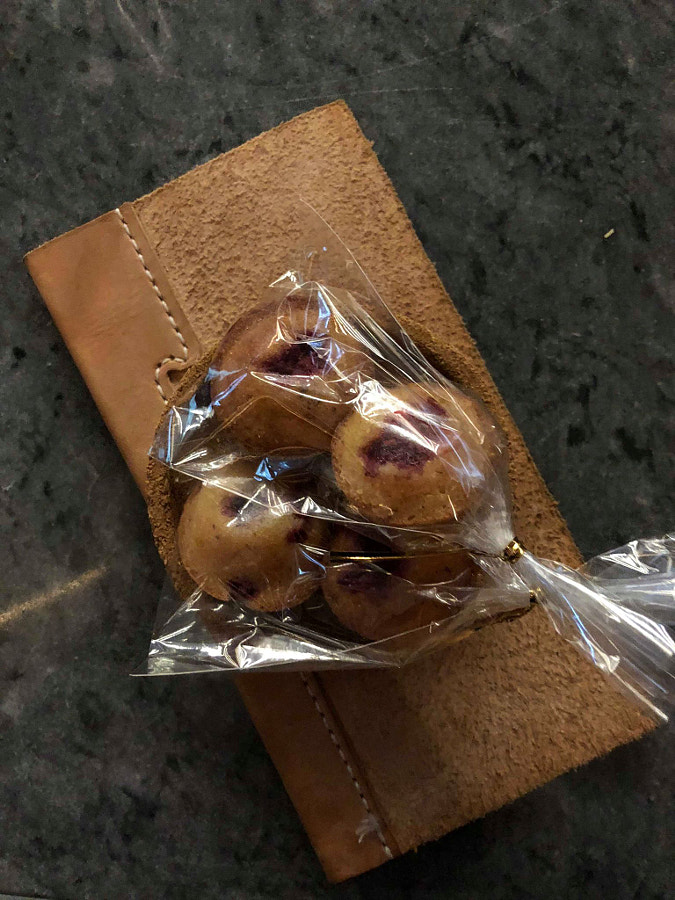 As they brought our bill, they also gave us each a bag of madeleines. These were such a nice treat and very delicious! It’s cute how they give you something to takeaway.

Overall, I was slightly disappointed with the food at Mak N Ming. I think I came in with really high expectations, but found many of the dishes to be a bit underwhelming. Perhaps the flavours did not fit my palette personally. Also, I would suggest getting one demi menu and one chef’s menu if you want to share and try different dishes. I saw many others do that and the demi menu actually looked better! The Chef’s menu is also very filling, so the demi menu is probably sufficient for me. Service-wise, it was professional and attentive.

Pros:
– Menu changes often (roughly every month)
– Some dishes are well executed while others are a miss for me

Cons:
– No a la carte available during dinner time