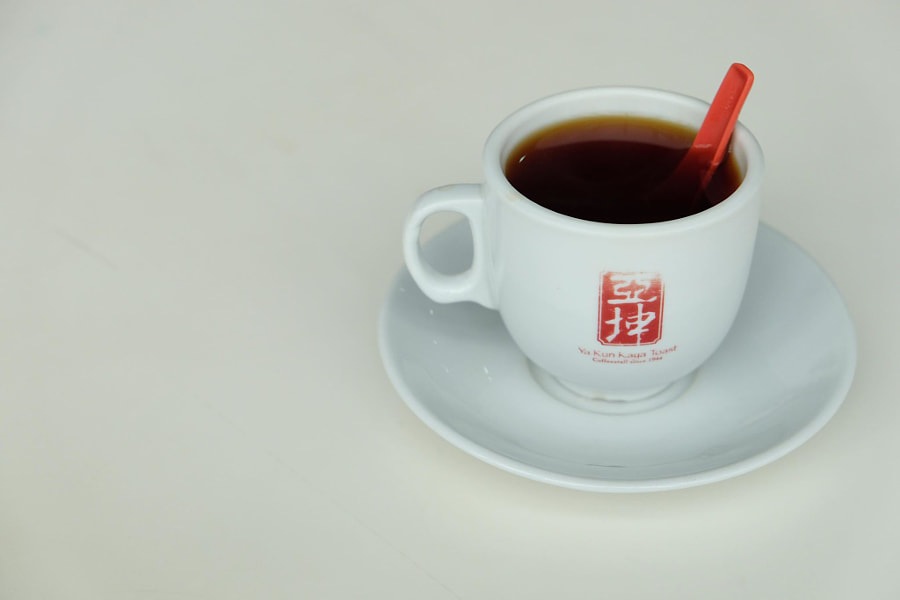 The next morning, we decided to go to 313@Somerset, which is a shopping mall along Orchard Road. Our goal was to have our favourite kaya toast at Ya Kun Kaya Toast. There are outlets all across Singapore so be sure to try it whenever you see one. However, since we were planing to walk around the Orchard area after, this was a great spot for us. If you are deciding between Toast Box or Ya Kun, I highly suggest Ya Kun as the toast tastes much better! I started with a Hot Tea which comes with my set. 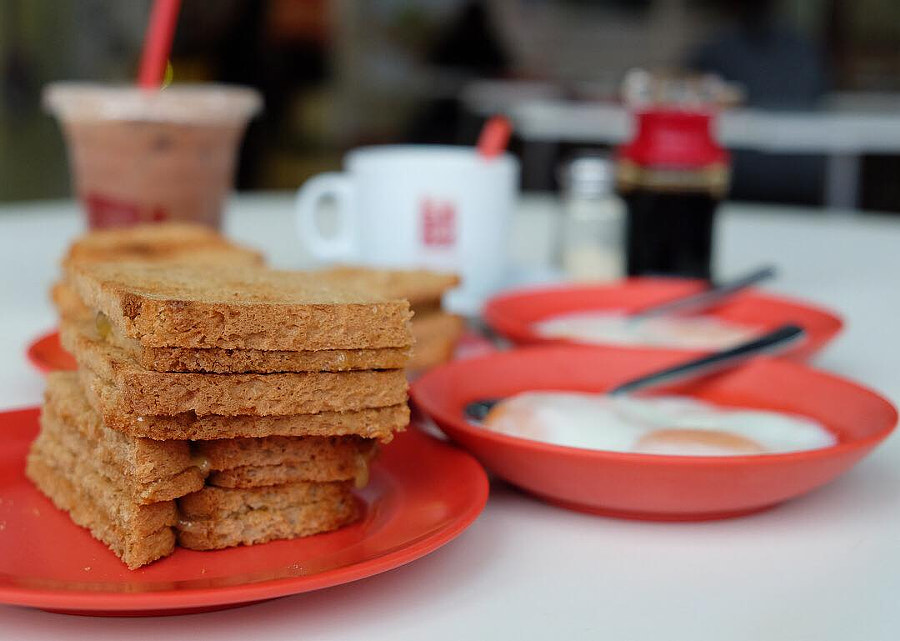 Since it wasn’t our first time here, S decided to try the Kaya Peanut Toast. It is essentially the kaya toast but with peanut butter as well. If you haven’t had kaya before, it is sort of like a coconut spread. It is typically made of sugar, coconut milk and eggs, pandan, and sometimes margarine or butter. It is a common breakfast dish for Singaporeans or Malaysians. S also got a Chocolate Frosty to quench his thirst. 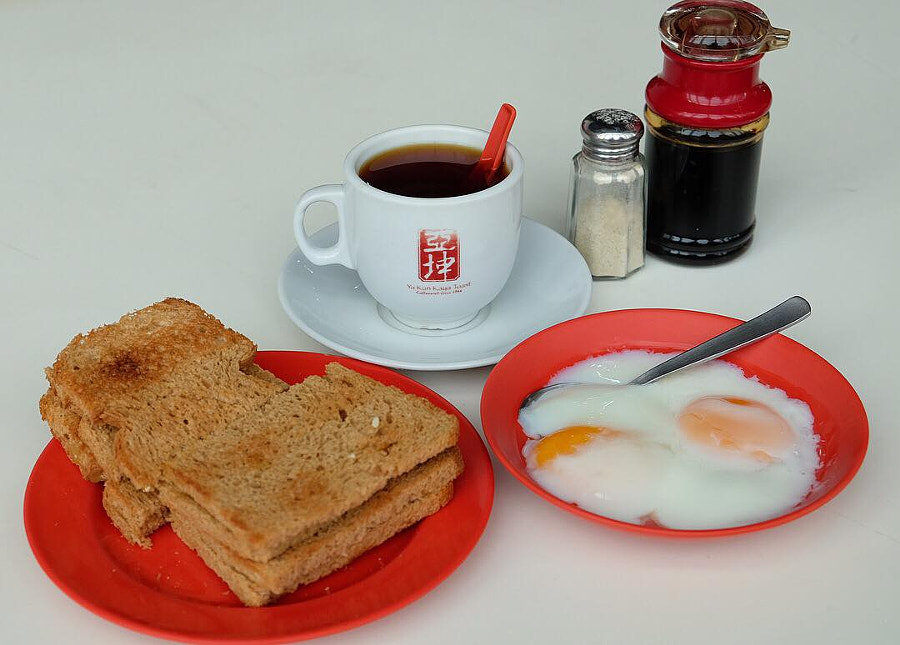 For myself, I got the traditional Kaya Toast with Butter. Kaya toast is not exactly healthy as the kaya often comes with slabs of butter, but it tastes amazing! Guilty pleasures! The value sets also come with soft boiled eggs which you whisk together with some soy sauce and pepper. You can dip your toast into the egg mixture for a different experience! 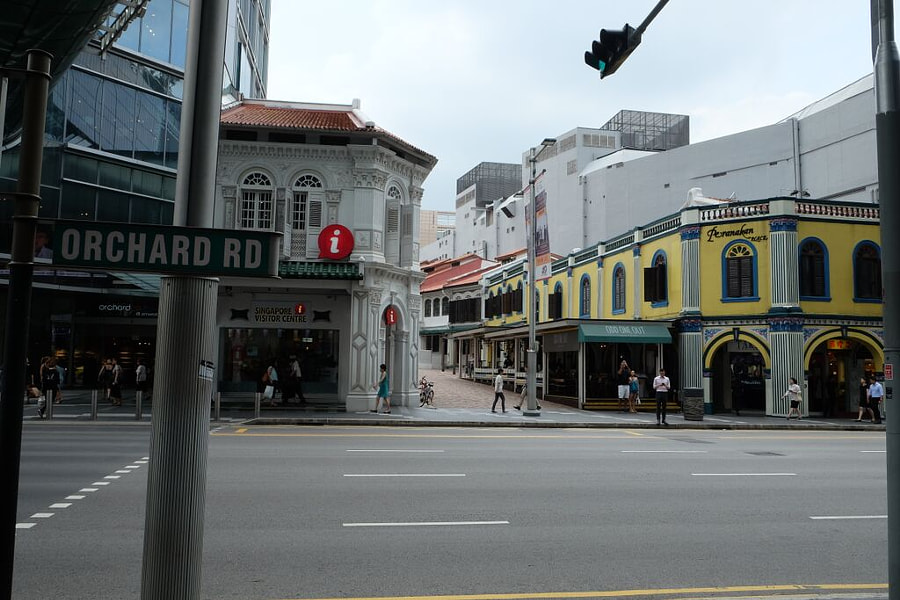 After brunch, we walked around Orchard Road and checked out some fancy department stores. We decided to check out the Singapore Visitor Centre which I suggest stopping by if you’re in the area. You can get all the maps you need and purchase any tourist tickets you’re looking for. They also have a small souvenir shop with some cute Singaporean items. On the second floor, they have an exhibition which changes and they have free tours  at 10:30 am, 11:30 am, and 4pm based on first come first serve. For example, when we went, it was close to mid-autumn festival, so they were actually teaching visitors how to make mooncakes! Unfortunately we just missed the start time! 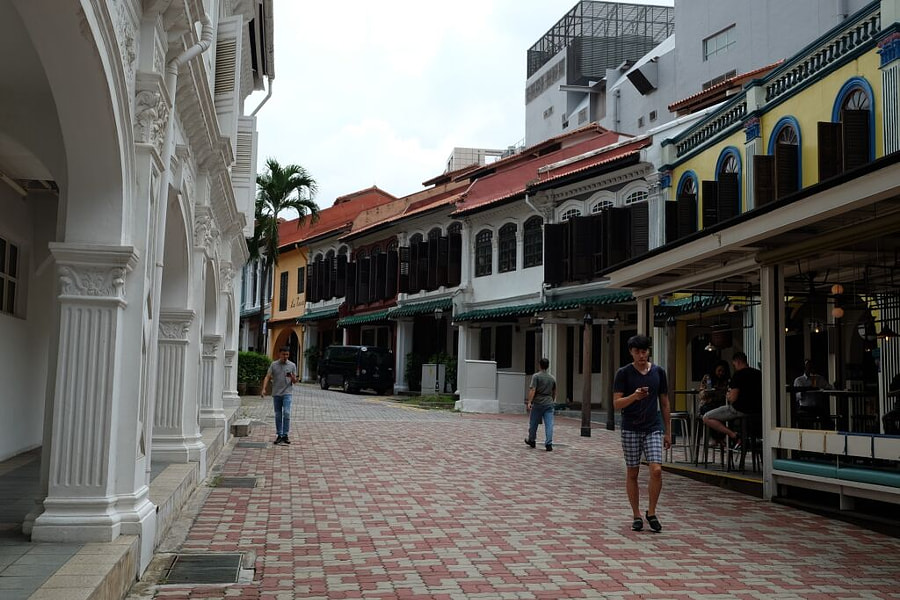 Right next to the Singapore Visitor Centre on Orchard Road is Emerald Hill, a neighbourhood which was a former home to many members of the city-state’s wealthy Peranakan community. The architecture here brings you back to the past and I especially loved the colourful buildings. Some of them are now bars so you can grab a quick drink here as well. Otherwise, it’s a nice detour from the modernized Orchard Road which doesn’t take too long. 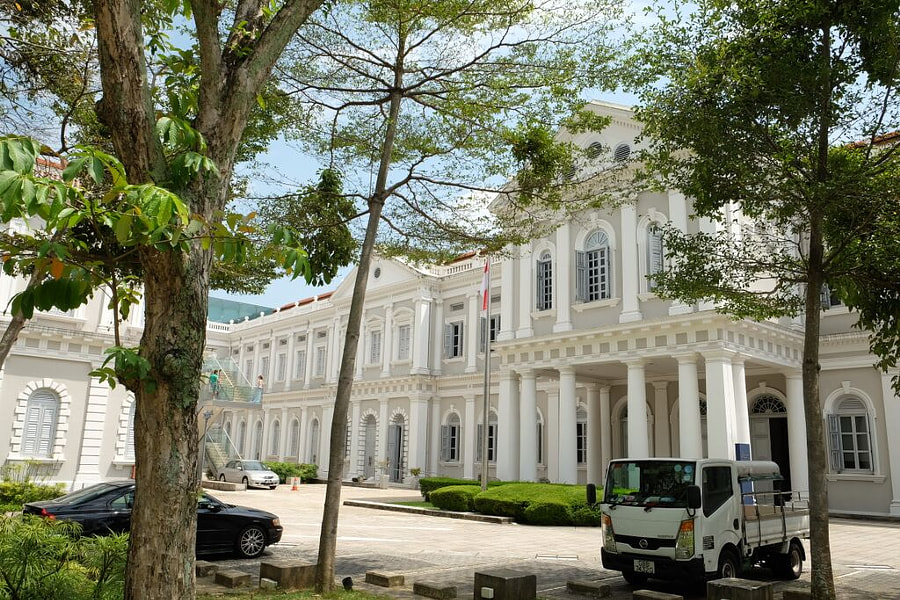 Our next stop was the National Museum of Singapore. For whatever reason, we decided we could walk 20 minutes from along Orchard Road to the museum. But it got confusing and after being lost for a while, we finally found the beautiful white building! The museum is just off the Fort Canning Park, so you can also quickly check that out. During our stay in Singapore this time, we used KLOOK to buy almost all our admission tickets. You download the app and it’s so quick and easy to use. For example, for the museum tickets, they normally go for $15SGD but we were able to get a $1SGD discount on KLOOK. It doesn’t seem much but it adds up and some of the other attractions are more heavily discounted. Plus, all you do is show them the QR code and oftentimes you can bypass the lineup. 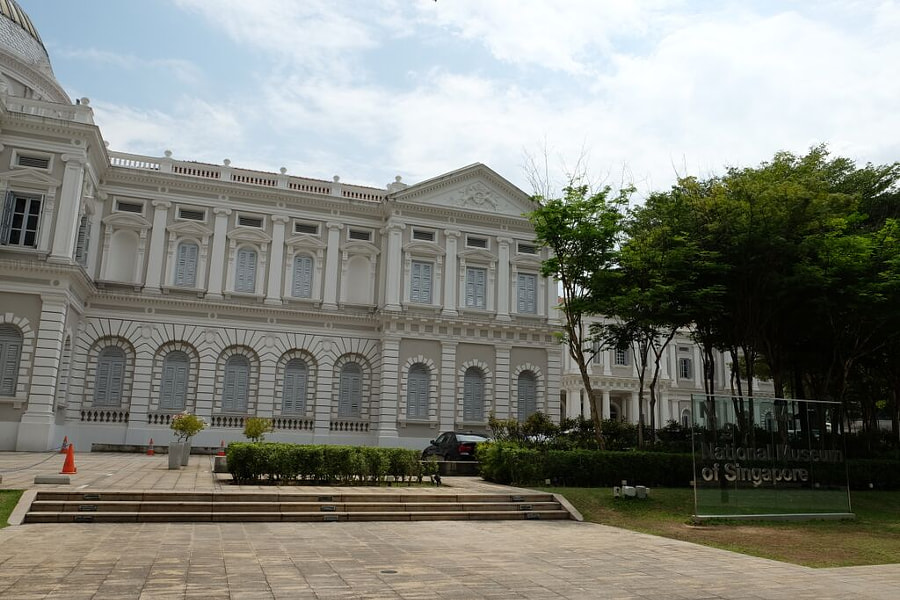 Anyways, we had a really good time at the National Museum of Singapore. Given I did not know much of the history, I found the museum to be extremely informative and well laid out. The exhibits were entertaining and dates back from 1887 to present day. You can definitely spend a couple of hours here and I have to add the exterior and interior is visually appealing! Great for those who want to get some Instagram pictures! They also had a Glass Rotunda which featured a cool interactive forest display. 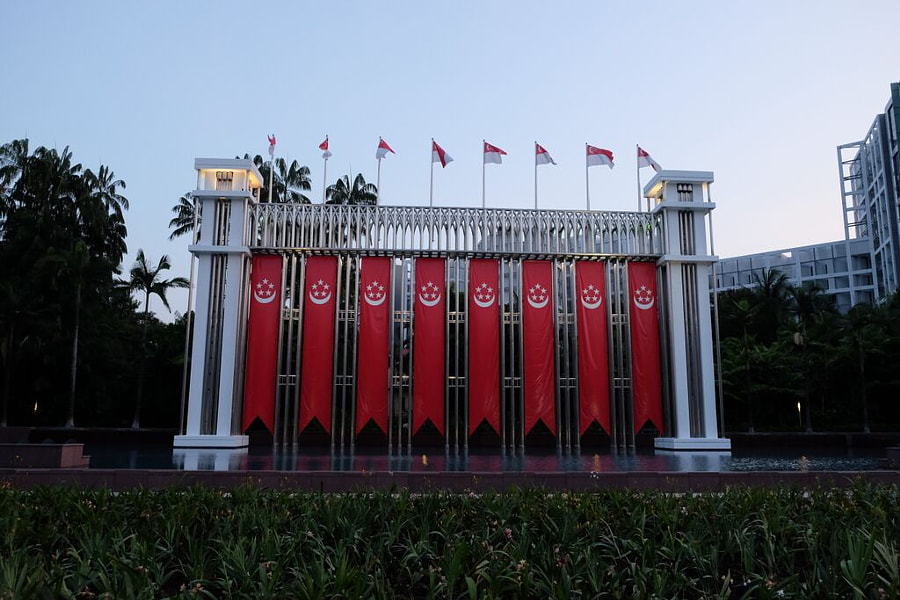 We also wandered over to Istana Park where we found the Festival Arch. Opposite to this is The Istana which is the official residence and office of the President of Singapore. Unfortunately, we are not allowed to visit the Istana Grounds although it is actually open to the public five days a year on special holidays. 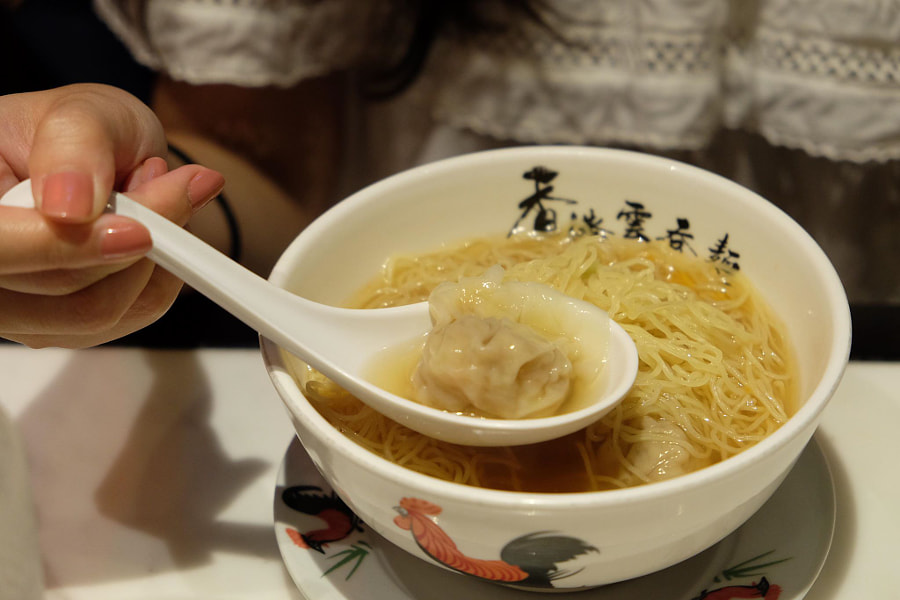 After lots of walking, we headed back towards Orchard Road to ION, a shopping mall. We were getting tired and hungry, so we decided to look around for food. We decided to settle on Hong Kong Wonton Noodle 香港雲吞面. I got the Prawn Wonton Noodle and it was actually pretty good. Noodles were chewy and broth was flavourful. 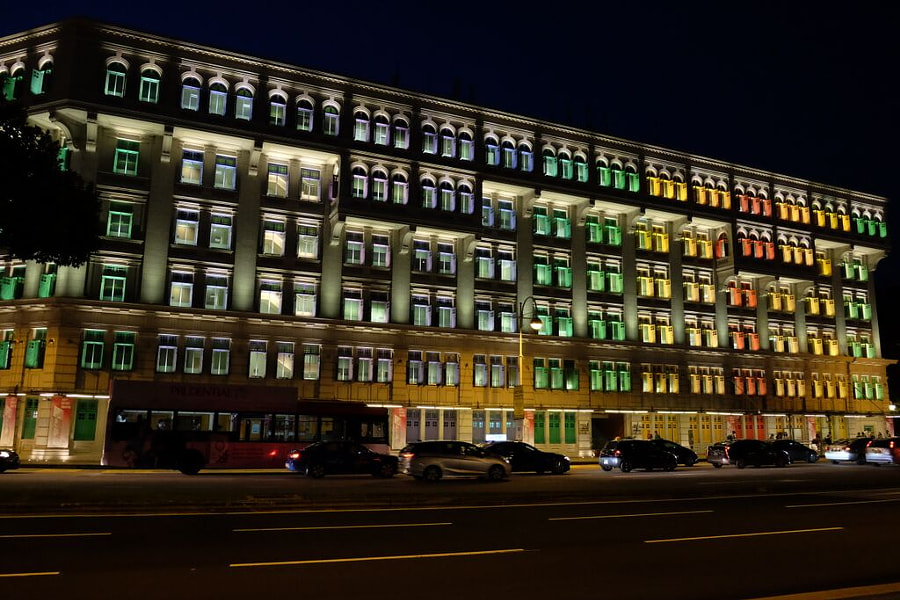 We then decided to take the bus to the Clarke Quay area. After getting off the bus, we were greeted by the colourful MICA Building, also known as the Old Hill Street Police Station. There are 927 windows with colourful shutters! 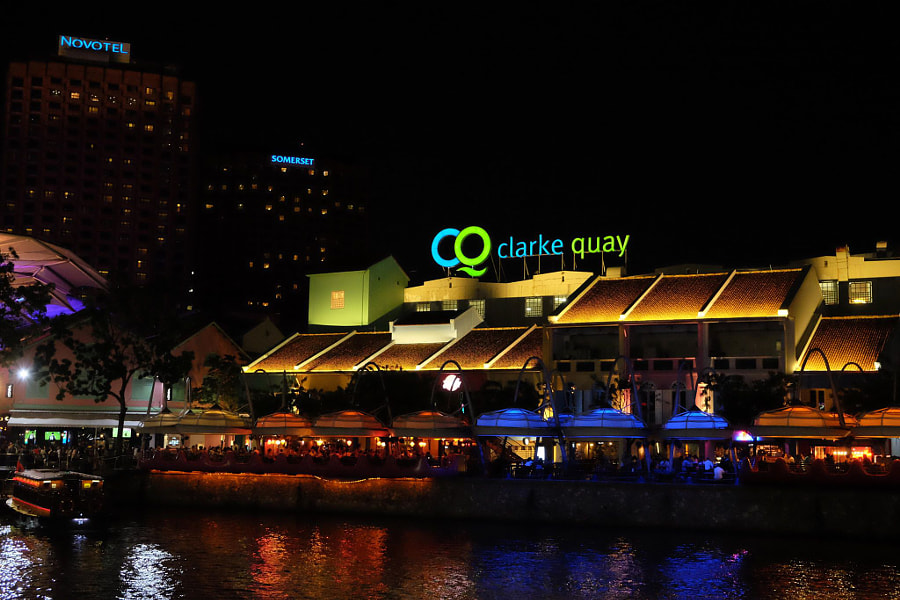 As we walked toward the water, you’ll find the famous Clarke Quay signage. This riverside district has some shopping, but it is more famous for the night clubs and night life along the water. Some of these restaurants/pubs are floating on water! 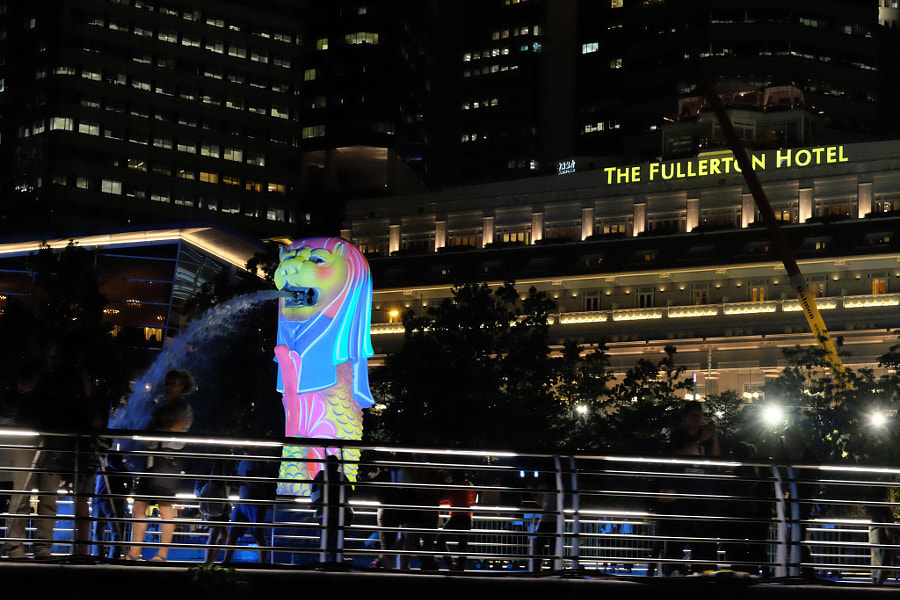 We came to Clarke Quay mainly because I wanted to go on the Singapore River Cruise. Again, we purchased this through KLOOK because it is slightly discounted but mainly because you can cut the line to purchase tickets and it also seemed like we were able to get into a fast track line. We simply showed them our QR code and we were on the boat in no time. I suggest going on this cruise in the evening because the night lights in Singapore are very enjoyable. 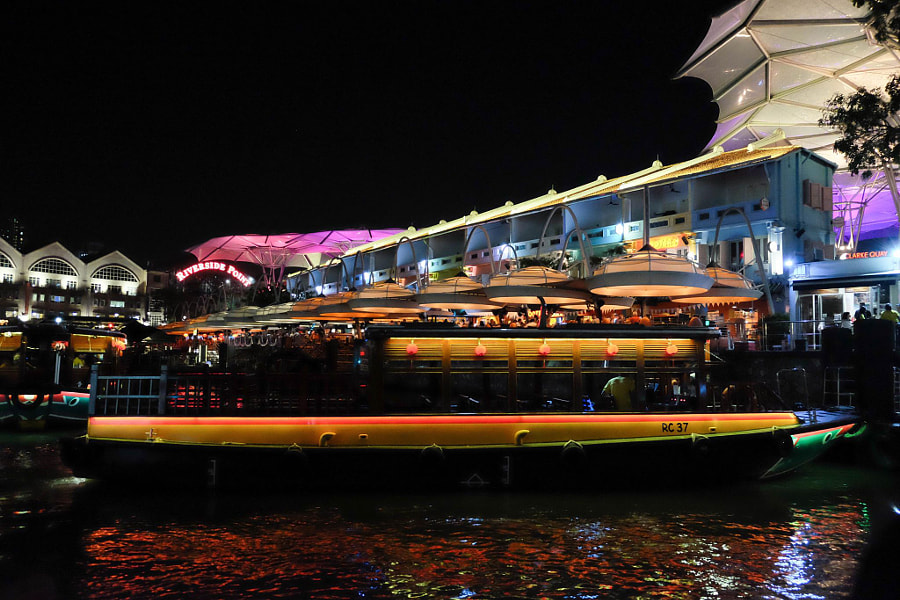 The boat is quite nice with seating outside as well as covered seating. 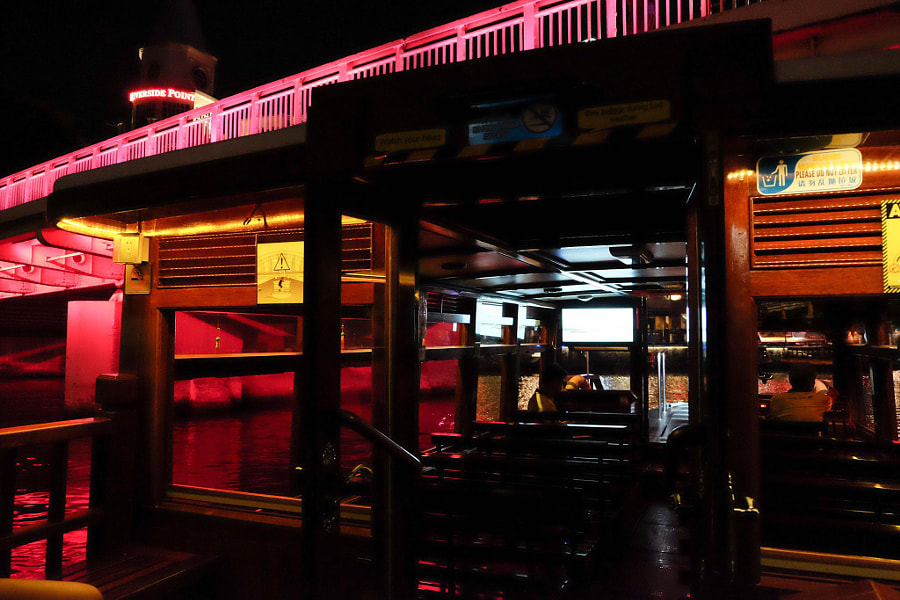 Seating is really just benches but it is very clean. I suggest sitting outside to take advantage of the 360 view. 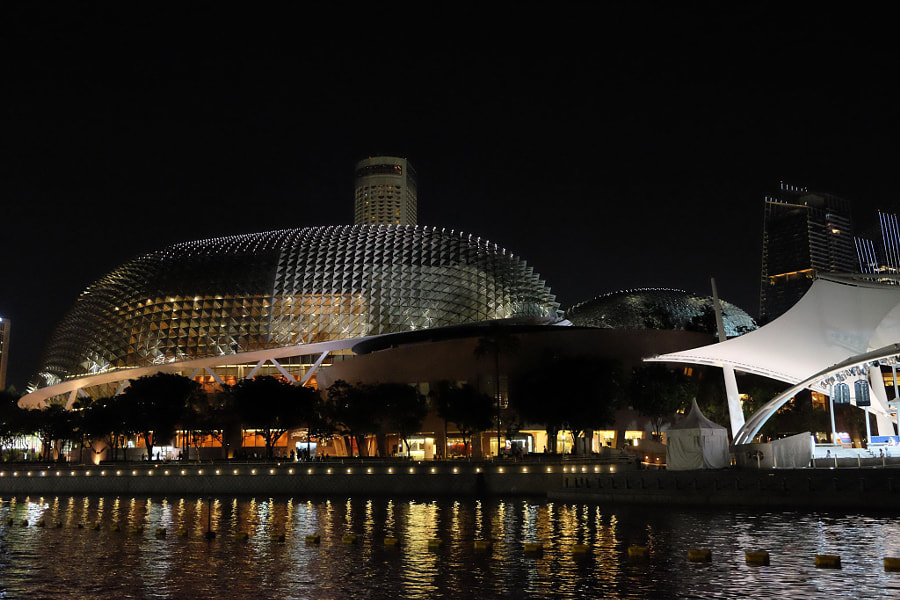 The boat ride is roughly 40 minutes and departs every 30 minutes. The last boat departs at 10:30pm. The boat will stop by different spots such as Fullerton, Merlion Park, and the Esplanade. You can choose to disembark at the spots, but you won’t be able to get back on. I suggest just staying on to enjoy the full ride. I also liked how they had English audio playing with some basic commentary of what you were seeing. This made it informative if you weren’t sure what the buildings were. 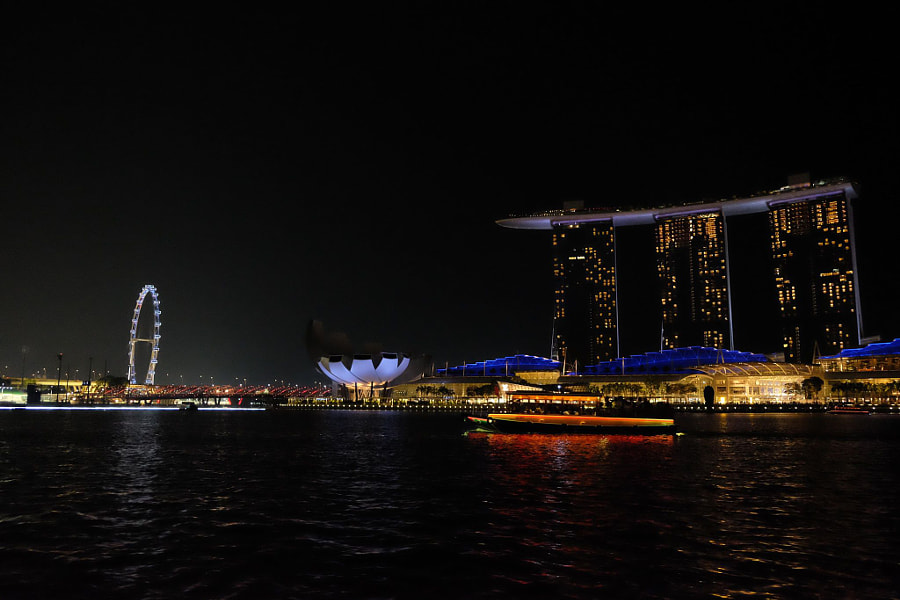 This is a great activity if you’re only in Singapore for a few days as you can see all the signature spots in just under an hour. I highly recommend this! On KLOOK, an adult ticket costs USD$17. 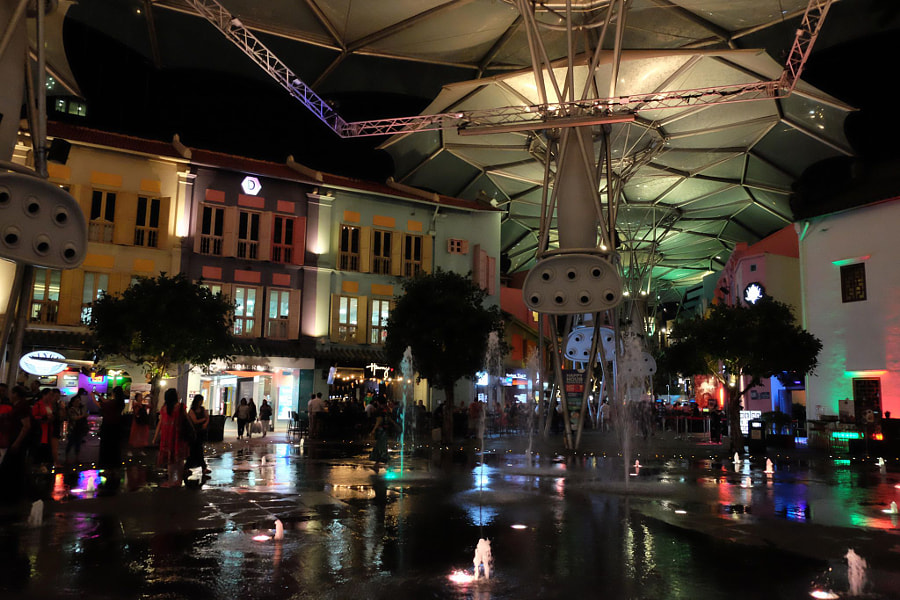 After we enjoyed the cruise, we headed back to the Clarke Quay area to walk around the pubs. There are many Western style pubs in this area, but keep in mind that alcohol in Singapore is quite pricey! 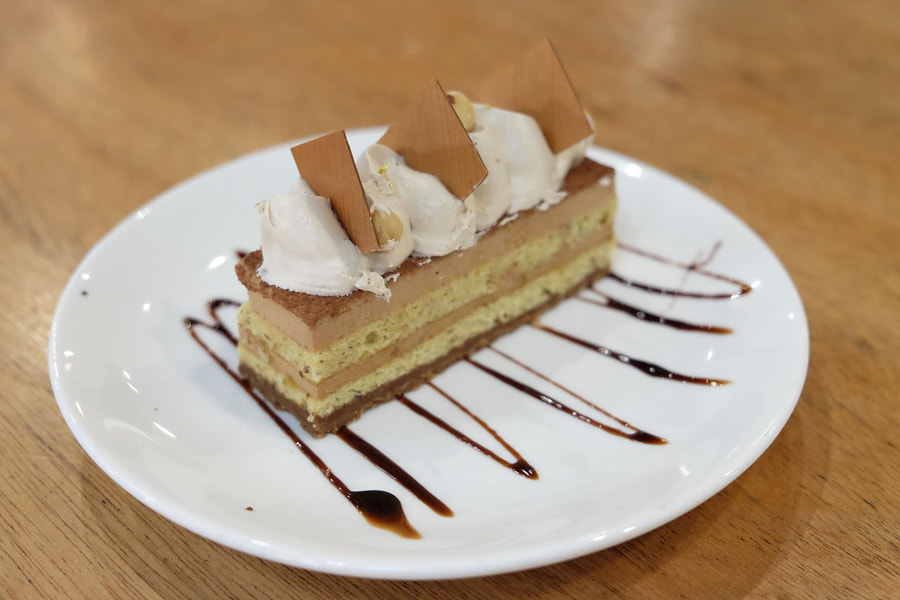 We decided not to indulge in the pricey alcohol, but instead on some dessert. Ended our night with some hazelnut cake and rested our feet before heading home!