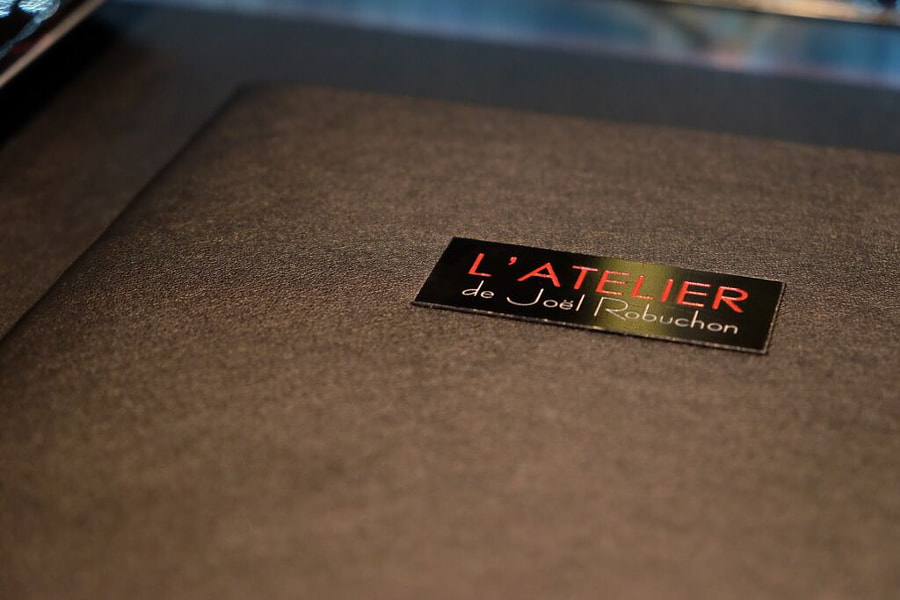 Since S’s birthday was shortly after our trip in Taipei, I decided to do an early birthday meal for him since there are so many nice restaurants in Asia. I ended up deciding on L’Atelier by Joel Robuchon which is located in the beautiful chic mall called Bellavia. I had made reservations in advance by sending an email online and I was able to get a response quite quickly. The restaurant actually was awarded a Michelin star last year shortly after we had visited! So even more of a reason to visit! 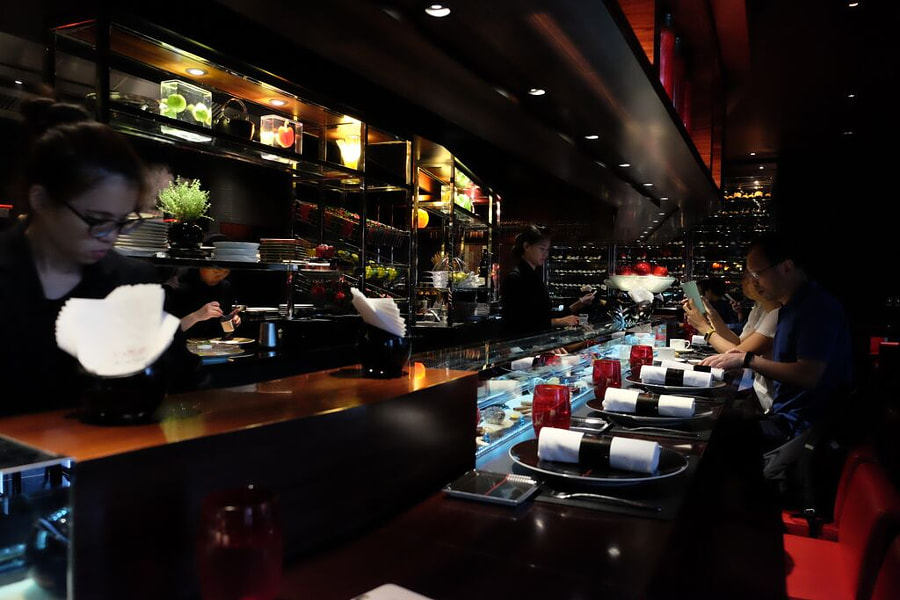 I decided on the set lunch course menu and when you make the reservation, they will ask what type of seating arrangement you’d like. There is counter/bar seat, high table, or lower couch seat. We decided to go with the counter/bar seat because you got a view of the kitchen showing the action of the chefs. The interior of the restaurant is actually quite dark but with cool lighting and red and black tones. 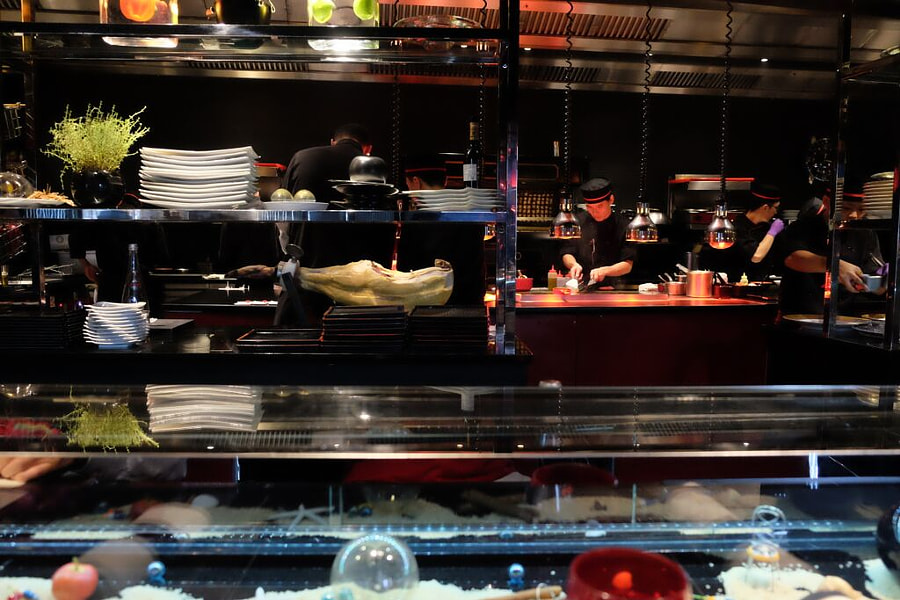 From our seat, we could see the chefs preparing our food. And all the ingredients in the kitchen. It was definitely quite exciting! 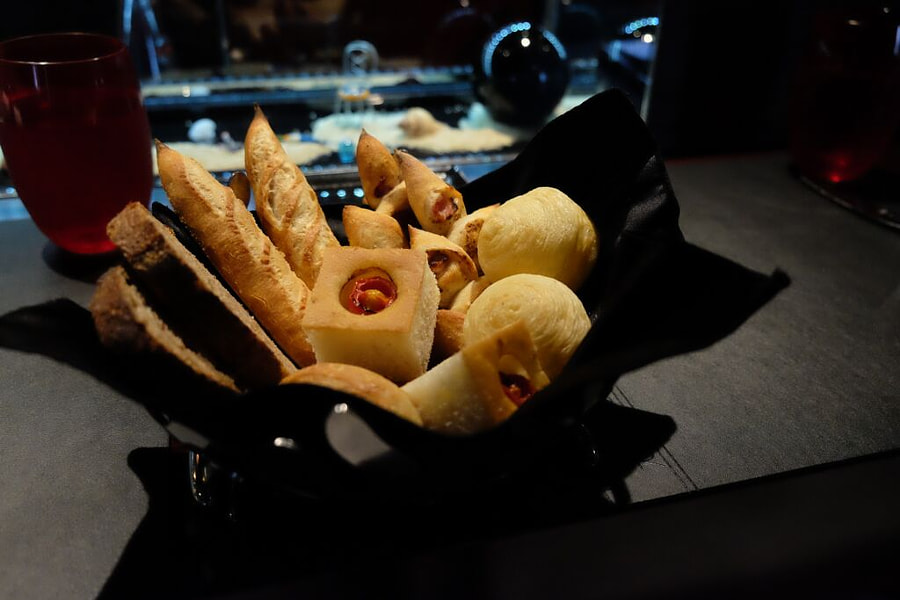 We decided to go with Menu A which is offered only during weekday lunches. For $1,380 NTD, you get an amuse-bouche, your choice of 1 appetizer, 1 main course, dessert, and coffee or tea served with petite desserts. To start, we are given a LARGE basket of bread. I have never seen such a big basket for two people. But wow, the variety is amazing and the bread itself tasted absolutely delicious! I think there were at least 6 pieces of different bread so over 12+ pieces for the two of us. I wanted to save room for the rest of the food, but I couldn’t stop eating the bread! Oh, and another note is that even if you order still water, it will come in a bottle. So we ended up paying almost $10 for a bottle of Evian water. 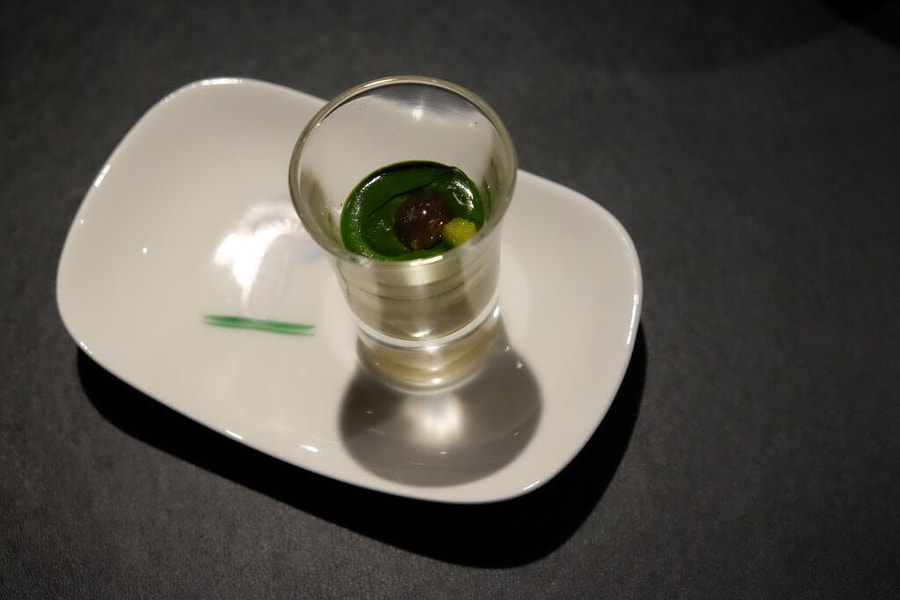 We started with an Amuse-Bouche which was sort of like a mushroom soup. Quite a nice palette cleanser! 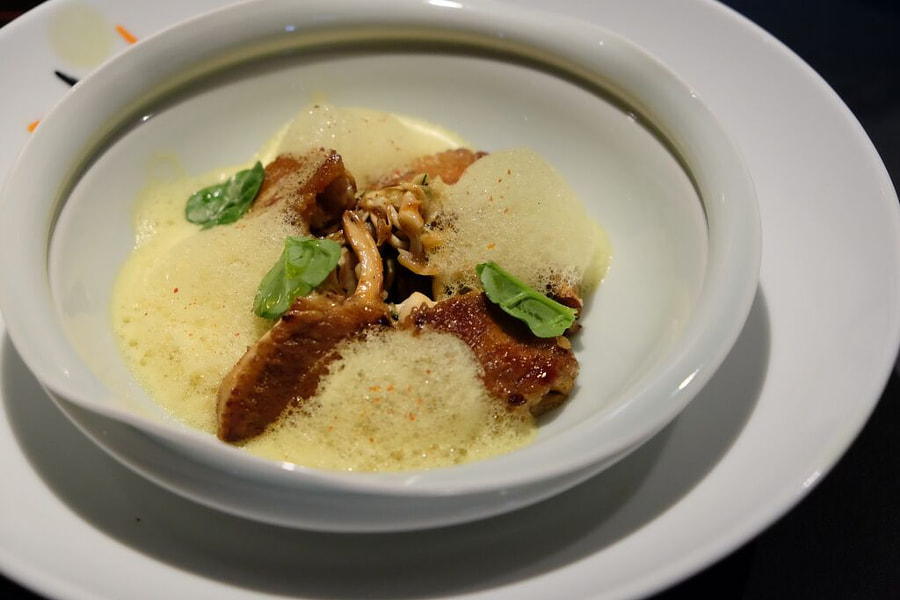 For appetizers, S got the Chicken Wings and Mushrooms Fricassee served with Chateau-Chalon wine sauce. This was nothing like we’ve had before but the flavours were delicious. It was almost like a deconstructed chicken wing with the chicken already de-boned. The foam was also a cool twist. 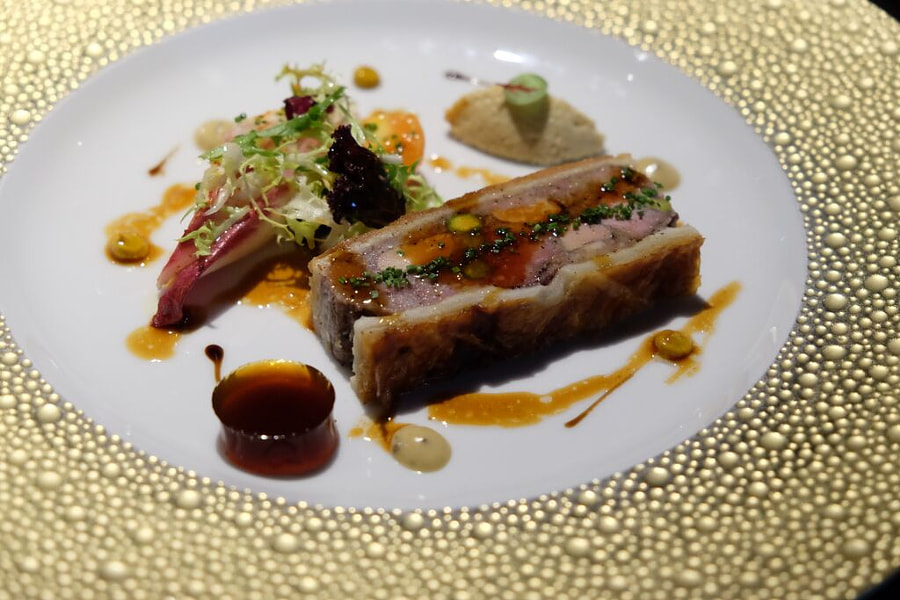 For myself, I got the Duck, Foie Gras and Pistachio Pate with Young Bitter Salad. I loved how it was paired with a mustard sauce. The pate was also wrapped with a bit of puff pastry so it was quite different from the usual. 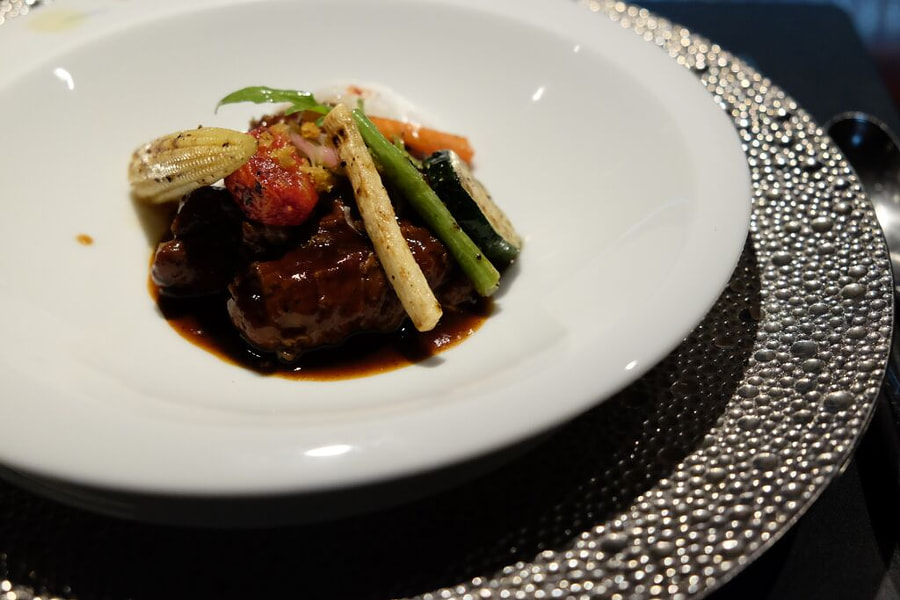 For the main course, S got the Braised Pork Cheek with Red Wine Sauce and Seasoned Vegetable. The pork was very tender and the sauce was hearty. A great main course! 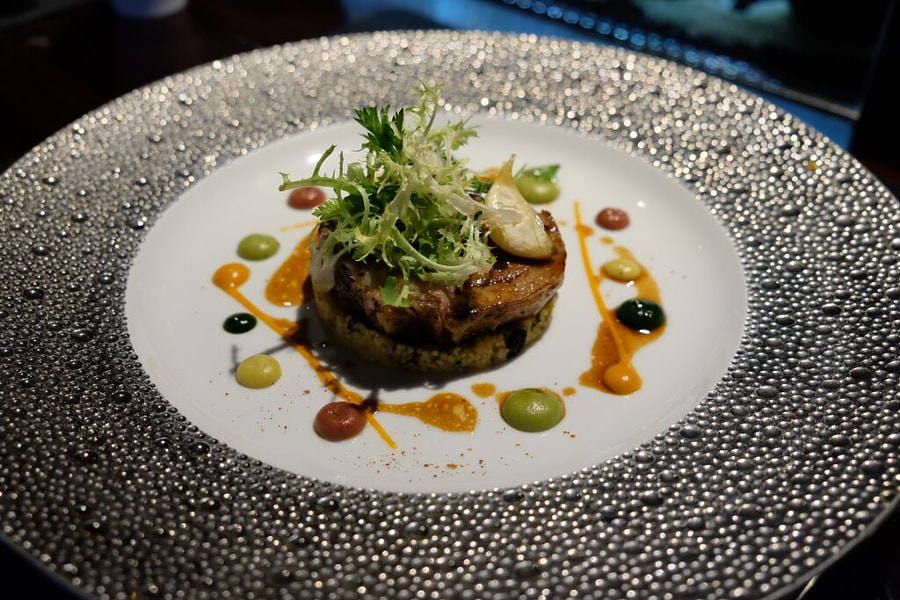 For myself, I got the Lamb Shoulder Confit with Vegetables Couscous and Coriander for my main. This wasn’t what I was expecting because the lamb shoulder was shaped into a circle. The flavours were quite tasty and it didn’t have any gamey taste it. 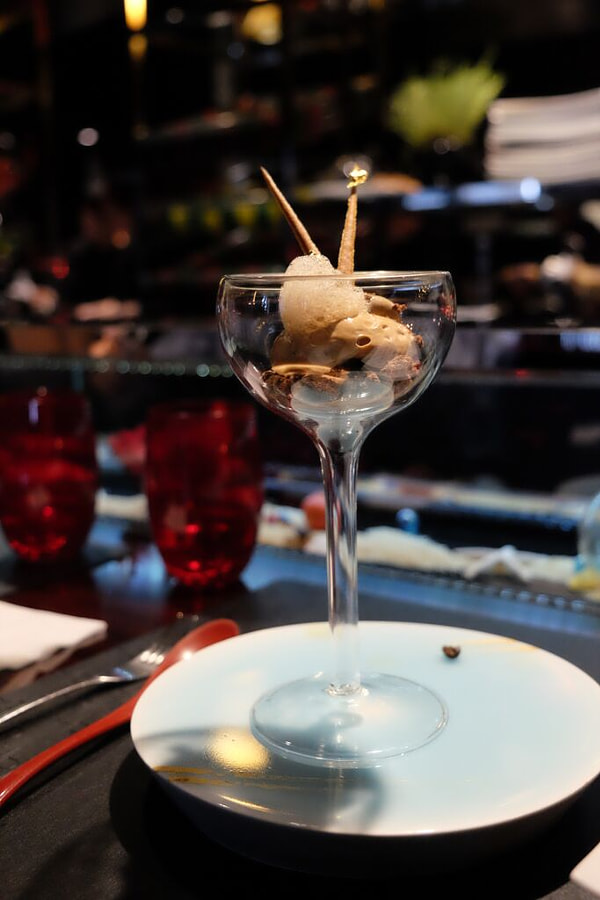 For dessert, S got the Bahibe Chocolate Ganache with Coffee Sorbet. What a beautiful dessert with so many different textures. 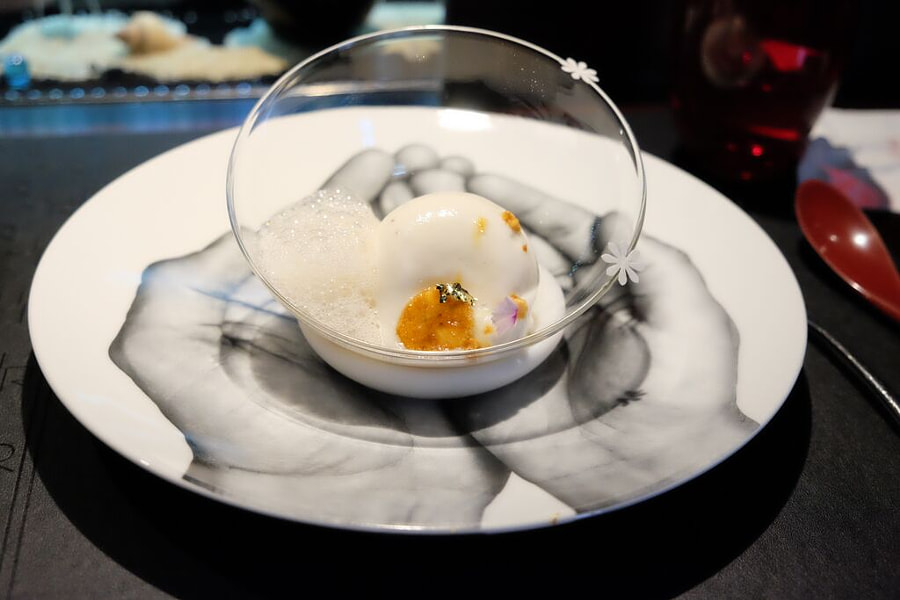 For myself, I got the Banana and Milk Mousse with Coconut Ice Cream and Honey Caramel Chips. Again, this was a beautiful dish and even the plate was perfect! The flavours were refreshing and I especially enjoyed the honey caramel chips! 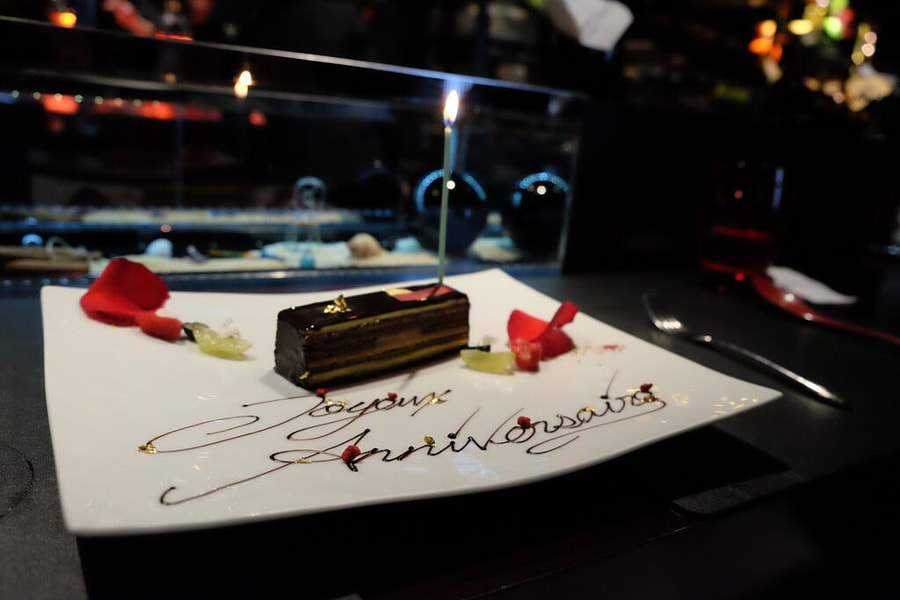 As I mentioned in my reservation that we would be celebrating a birthday, they asked if I wanted to add a birthday cake for $150NTD. I decided to add it, but probably could have skipped it because we were already very full from the 3 course meal. However, it was nice that they added a candle and a message to make it extra special. This was a chocolate cake with different textures on each layer. 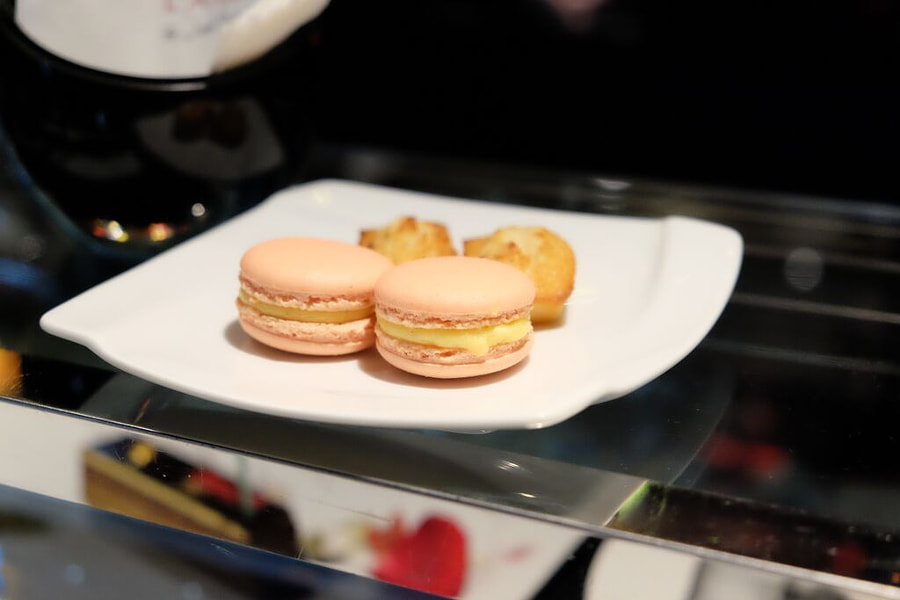 To finish, we were provided with Petite Desserts and they included macarons and little puffs. As if we didn’t have enough desserts already! 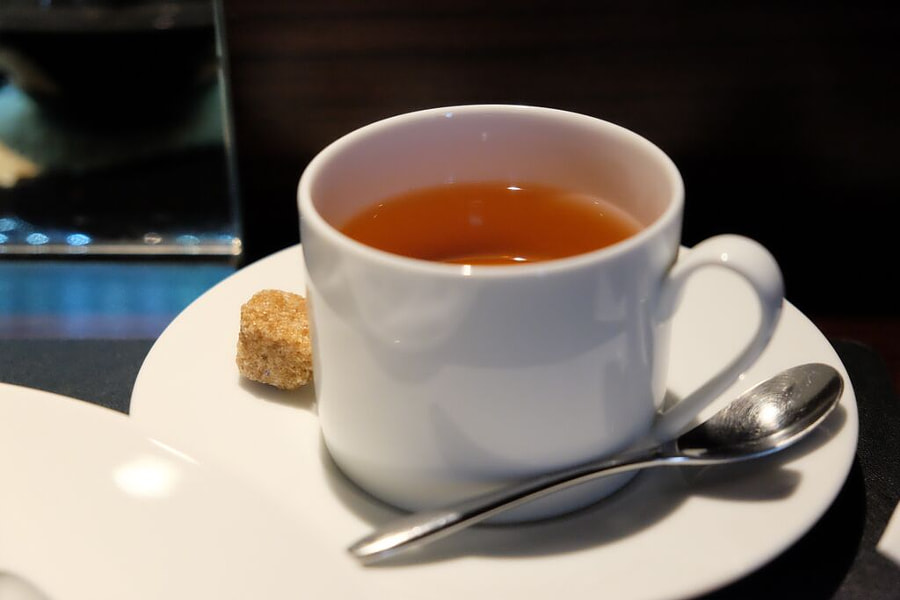 To end our meal, you can choose your choice of Coffee or Tea. I decided to go with a Earl Grey. Overall, it was a great meal given it’s only $60 a person for a famous restaurant and the dishes were very unique. However, since the restaurant has been awarded a Michelin star, the same menu now costs $1,580 NTD which is around $70. Still, I think it is well worth it! 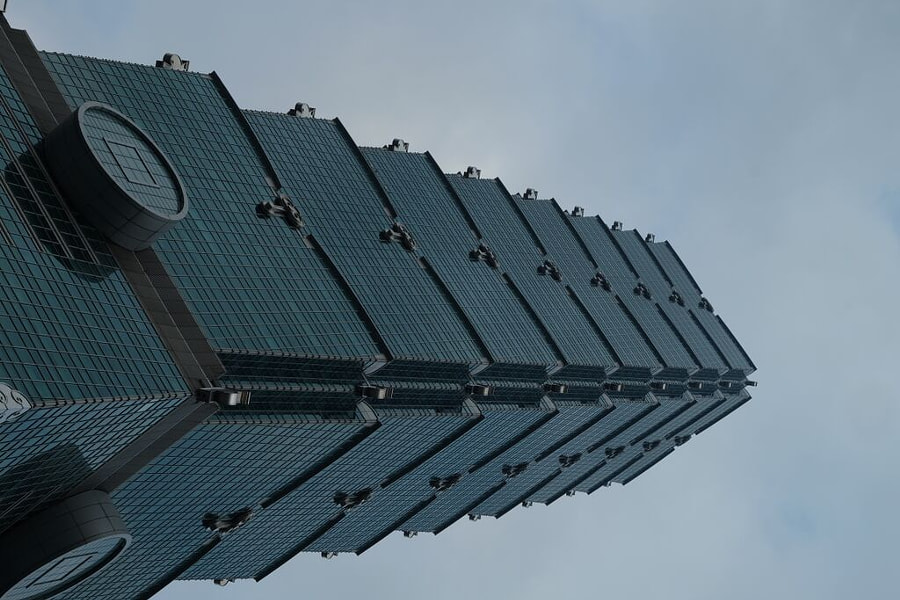 After lunch, we decided to walk over to Taipei 101 to get some quick shots. We had gone up to the observatory last time, so we skipped it this time around. 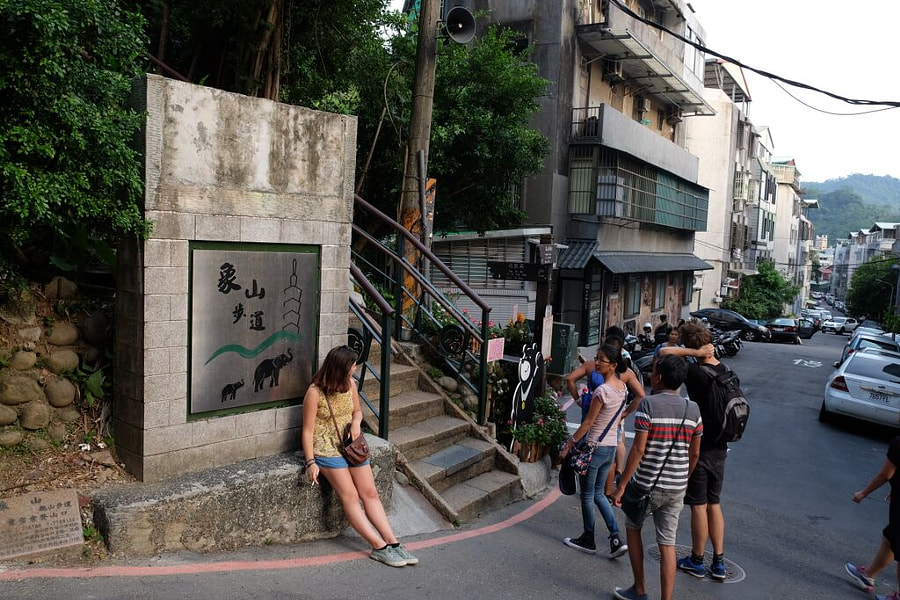 I then suggested that we hike Elephant Moutnain 象山. We got to MRT Xiangshan Station, and took Exit 2 and walked alongside a park. Then, you will find some signs telling you to take a left to go to Xiangshan Hiking Trail. You’ll then find this sign which is the beginning of the hike! 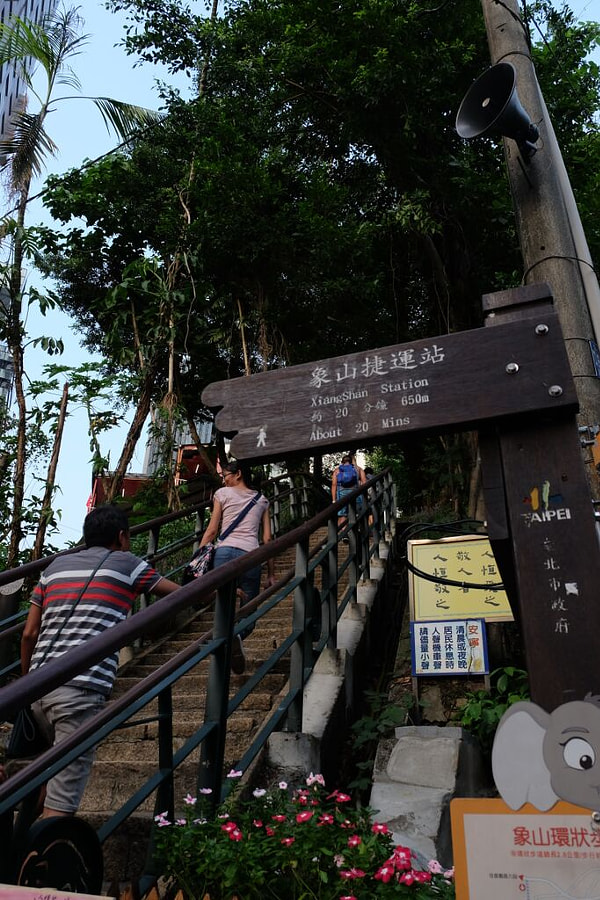 The hike itself only takes around 20 minutes but it was actually quite grueling because of the heat and the steep steps. I advise doing this late in the afternoon, because the heat will really get to you. 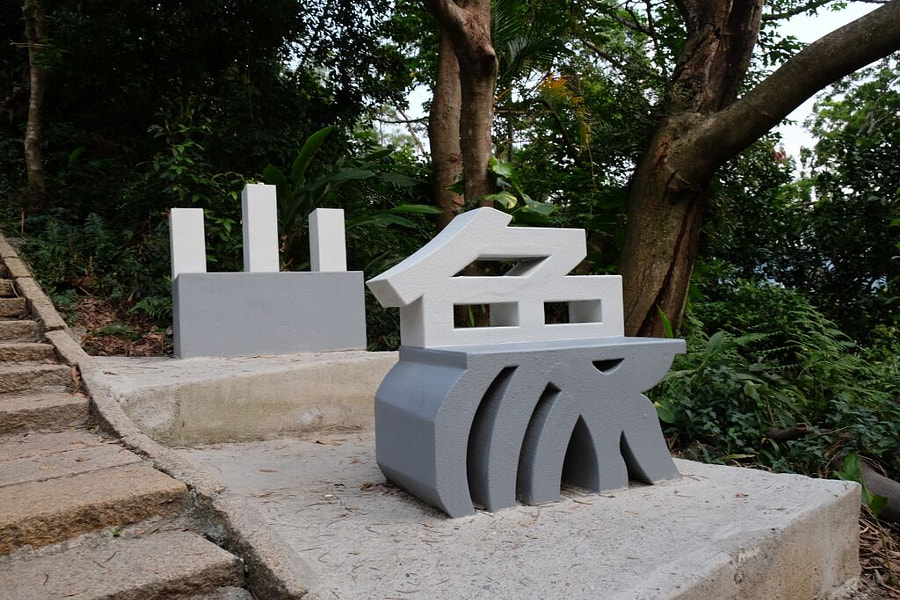 Along the way, we found some cute statues with the Chinese words Elephant Mountain. 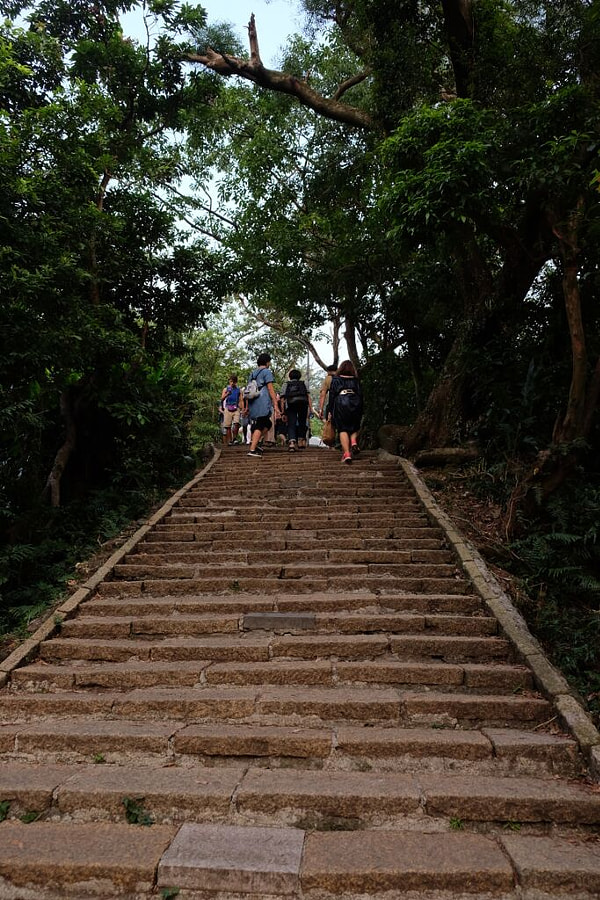 The steps up top became not as steep so it was a bit easier. However, be warned that there’s tons of mosquitoes and it doesn’t help when you’re sweating too! Definitely put on some bug spray before you head here. 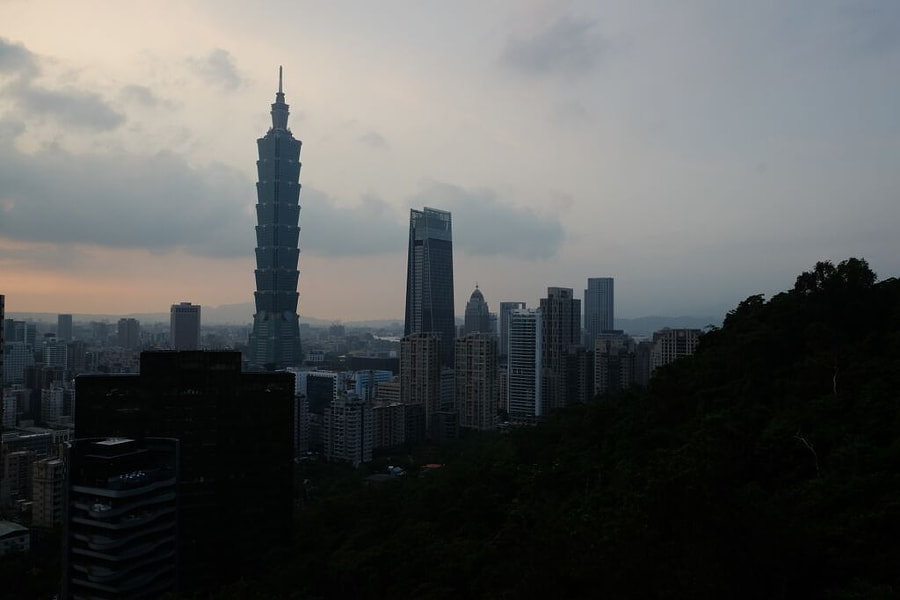 As we approached the top, the sun was setting! The view from up top is truly quite beautiful. A different view from Taipei 101 because you actually get to see Taipei 101 from here! 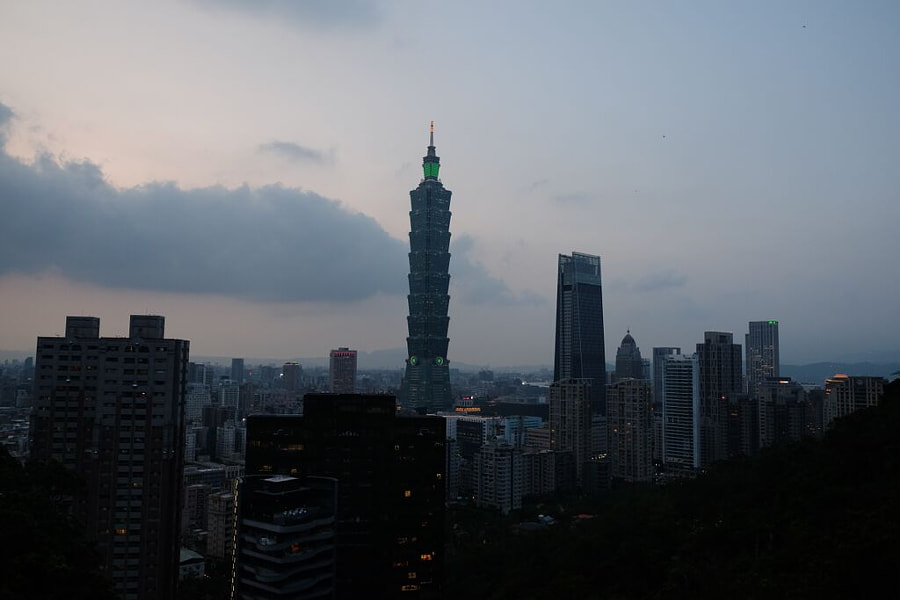 And if you wait until the sun fully sets, you’ll see Taipei 101 turn on its night lights. If you want to set up a tripod for your pictures, be sure to come early as there will be lots of people around sunset!

After we finished hiking, we headed back to our hotel to freshen up as we would be meeting up with my friends who were also in Taipei. Didn’t end up taking pictures as we just wanted to enjoy the moment but we had a nice dinner and drinks and headed to a rooftop bar called Frank’s and called it a night!