After lunch at Tamago to Watashi, we found a dessert shop on the same floor. It was called Cafe Est! Est! and the plastic models of the desserts presented in a display outside their store definitely lured us in. They had a large selection of parfaits, crepes and sundaes. Other than desserts, they also have actual main entrees, but we were here for the desserts! After sitting down, we realized that again, each person had to order at least one item. Seeing that the drinks were roughly the same price as the desserts, we ended up each ordering one dessert. For myself, I chose the Mille Crepe Cake Parfait. After having the Mille Crepe from Lady M in Korea, I had to try it again! Unfortunately, this was nothing close to as good as the one from Lady M. It did have the layers of crepe, but it was hard rather than light and fluffy. It didn’t seem like a fresh cake. Underneath, there was a scoop of vanilla ice cream, some corn flakes, and the rest were whipped cream! After eating the cake, I didn’t even end up finishing the rest of it. It was overly sweet and eating pure whipped cream was nasty. It wasn’t even good whipped cream. Super disappointed!

K went for the Black Sugar Mochi Crepe. It was filled with mostly whipped cream and a scoop of vanilla ice cream. On top, there were also mochi that was covered with black sugar. Some sprinkles were added to make it look cute and pretty. I actually enjoyed her crepe much more than my parfait. The black sugar mochi were very yummy!

C got the Cheesecake Parfait, which had the same problem as mine. Way too much cream at the bottom! The cheesecake was decent, but it wasn’t the best I’ve had. It was smooth, but again, it didn’t taste fresh. Overall, I wasn’t too pleased with the parfaits at Cafe Est! Est! They are also quite pricey, at around 800 to 1,000 yen for a basic parfait. If you are interested in crazy looking parfaits, then this may be the place for you. They have a famous parfait called EST 48, which has ice cream sundae cones stacked on top of another and reaches 48 centimeters. high. But honestly, I doubt that it tastes that great. It’s more for the looks. 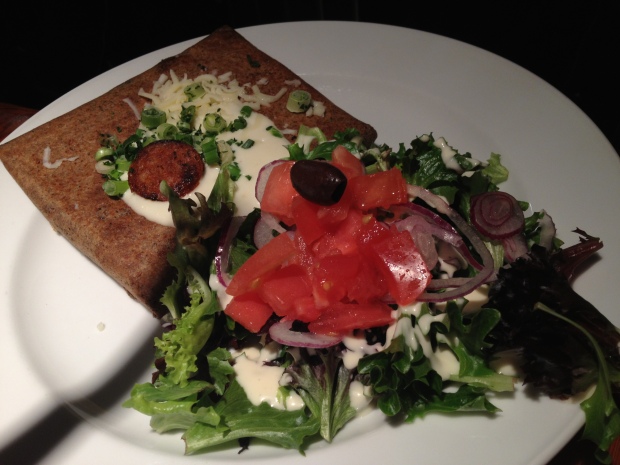 A while back, I joined K up at Whistler for a night and that also meant trying some of Whistler’s restaurants. Araxi is known to be one of their top, but it’s also extremely pricey. The restaurant was also completely packed, so we decided to try out Crepe Montagne. They offer French crepes, but are also famous for their fondues and Swiss Raclette. This restaurant is rated very well, but it’s also extremely small. It fits roughly 30 people in total, and is constantly packed. We waited around 20 minutes and were given a very tight seat. You really can’t move around! Other than that, the food is pretty good. We went for the Chorizo Crepe, which was filled with the spicy sausauge, cheese, green onions and topped with a bechamel sauce. It also came with mixed greens along with a Dijon vinaigrette. The crepe was actually one of the best I’ve had. the crepe itself was slightly crispy, and the fillings were very flavourful and cheesy. However, their crepes are quite expensive, priced around $22 each.

Since they’re famous for fondues, of course we had to give it a try. They have both cheese and meat fondues. We chose the Old Fashioned Cheese Fondue. All their fondues are made with Emmenthal and Gruyere cheese from Switzerland, and seasoned with garlic and white wine. For the Old Fashioned, it is also mixed with Dijon mustard and herbs. They give you a large bowl of French baguette cubes, and we definitely were not able to finish all that bread between the two of us. The fondue would be great to share with more, or just to share with two people on it’s own.

The fondue was definitely very cheesy. The server would constantly come around to stir our pot so the cheese didn’t clump together. A quick stir, and your cheese would melt nicely again. Unfortunately, we found that our fondue had an odd taste that we didn’t personally really like. It might’ve been the white wine or the dijon, but it threw us off a bit. Also, the bread quality isn’t too good, as it’s very rough. I guess since it’s soaked in the cheese, it doesn’t feel as rough anymore, but I was slightly disappointed with the quality since we’re paying $23 for the fondue. 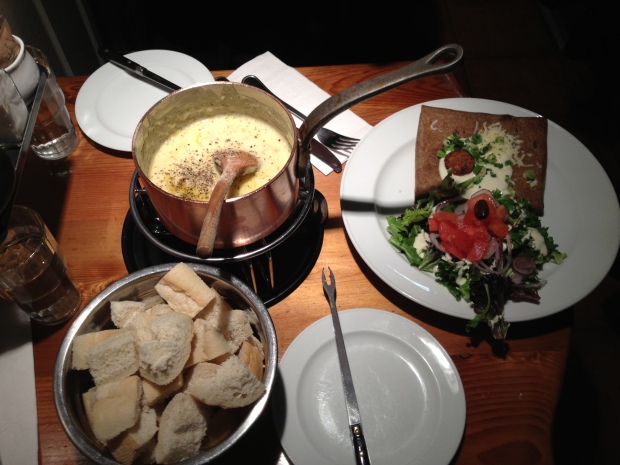 And here was our meal! A very small table filled with lots of food. Our server was also particularly amazing. She was friendly and funny and K and I definitely agreed she made our night very enjoyable. We still found the prices to be on the high side though, even though we were quite satisfied with the food. I guess it’s because you’re in Whistler, and they’re able to price it higher due to the tourists.

The beautiful Notre Dame Cathedral! Anyways, after a day of exploring, we ended up at the shopping area on Blvd Haussmann. It was time to eat dinner, and we decided we should treat ourselves to a decent meal. We wandered into a street next to Le Printemps, which is a huge department store. The street had a few cafes, but Brulerie Caumartin Cafe caught our eyes as they featured a neon sign saying Moules et Frites for 11 euros. I’m a sucker for mussels or clams, so off we went!

I think the cafe is quite tourist friendly, as the table next to us were an American couple. The waiters also speak English quite fluently, and are extremely friendly. They joke around and such, making the experience much better. The cafe itself is quite small, but we luckily found a seat. Of course, I ordered the Moules et Frites. This dish is supposed to be popular in Paris, so definitely try it out when you’re here. I still remember having one of the best Moules et Frites in Paris back when my teacher told us where to eat. I wish I remembered where that was now… Anyways, this was the biggest bowl of mussels I’ve ever had. The picture makes it look like there isn’t much, but trust me, the size was ridiculous. I had only finished half of it, and was already getting full… Even my sister questioned if there were any empty shells, because there was so much! Nope..not one empty shell in the pile. I wouldn’t say the sauce was the best I’ve had. It was quite watery, mostly of a celery and onion white sauce. It wasn’t bad though. A white wine sauce would’ve been perfect, but I couldn’t complain with so many mussels at only 11 euros. The mussels were slightly smaller, but they were extremely fresh. Fries were also not bad as they weren’t too oily. I was very pleased overall!

My sister said she had to have a crepe while in Paris! I mean, crepes originated from France right? It was dinner time, so she chose a Smoked Salmon Crepe. Savory crepes are always a good alternative to sweet ones if you’re not into sweets. The amount of Smoked Salmon was a little less than expected. She said it was only decent and had better before. Oh, and a funny note is that “iced tea” means “sprite” in Paris… We ordered an Iced Tea and ended up with a Sprite, and the American couple next to us laughed and said they wouldn’t have thought about that as well… Ah..love it when words have so many different meanings in different cultures!

I’ve been seeing everyone posting delicious dessert pictures from Mimibuloveme so I dragged J along to go check it out. Weirdly enough, the outside of their store says Bubble House. We were sort of confused for a second, but I walked closer and saw that they sold the same things I had saw on their Facebook page. I’m guessing they haven’t switched the sign from the previous shop?

The place is fairly small, and is actually the same location where Dots Desserts used to be. Their tables reminded me of what Dots had too. They also have this awesome panda bear sitting on a chair. Totally wanted to hug him.

They also have these paintings around the shop, and they also sell greeting cards with these characters.

I chose the Matcha Crepe to share and it was filled with red bean  and a few mochi balls inside and on the top. I wish they put more mochi balls, because those things are my favourite! It was then topped with a scoop of matcha ice cream on the side. Not bad! It’s also decently priced at around $5 compared to many other crepe places which charge at least $8.

Because I enjoyed the Matcha Ice Cream so much, I asked for another scoop of it for just $1.50. Not bad at all considering a scoop of ice cream is usually over $3 at most dessert shops!

Overall, Mimibuloveme is a cute little shop to grab some desserts and chat with friends. I’m guessing that it gets really busy on weekends and late nights, and therefore hard to find a seat.

So I found that you guys really enjoyed my post from the Wicked Spoon buffet, so I decided to upload the rest of my pictures from buffets. I didn’t think they were as great as the Wicked Spoon, but they were still really good! Another buffet I went to in Las Vegas was Todai: The Sushi and Seafood Buffet located inside Planet Hollywood. They had a larger variety of sushi and seafood to choose from including crab legs! I also really liked how they had a section where a chef would make you udon instantly and you could choose what you would like as ingredients. They also had a dessert section where a chef would serve you soft ice cream and also instantly make you crepes with different fillings you could choose from. The variety of desserts were also great! A little pricey for the buffet, compared to the Wicked Spoon, but I guess seafood is expensive! The wait was also very long (at least an hour), but I had this on Christmas and Las Vegas is famous for those long lineups at buffets! If you want seafood and sushi in Vegas, this is the place to go!

I’m going to keep posting other pictures of food I had from a few places I traveled to this past year, so be sure to check back often!