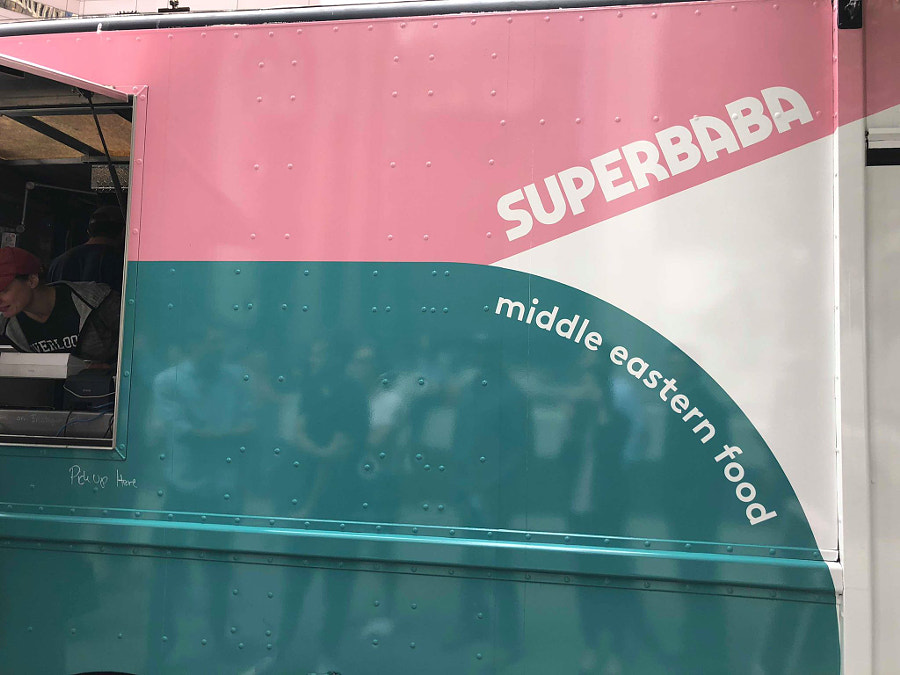 Superbaba is one of the newest food trucks in the downtown core. It opened up earlier this year and parks in front of the Bentall Towers on the weekdays. The food truck has a restaurant in Victoria so not a stranger to BC. It caught my attention after seeing so many people lining up. 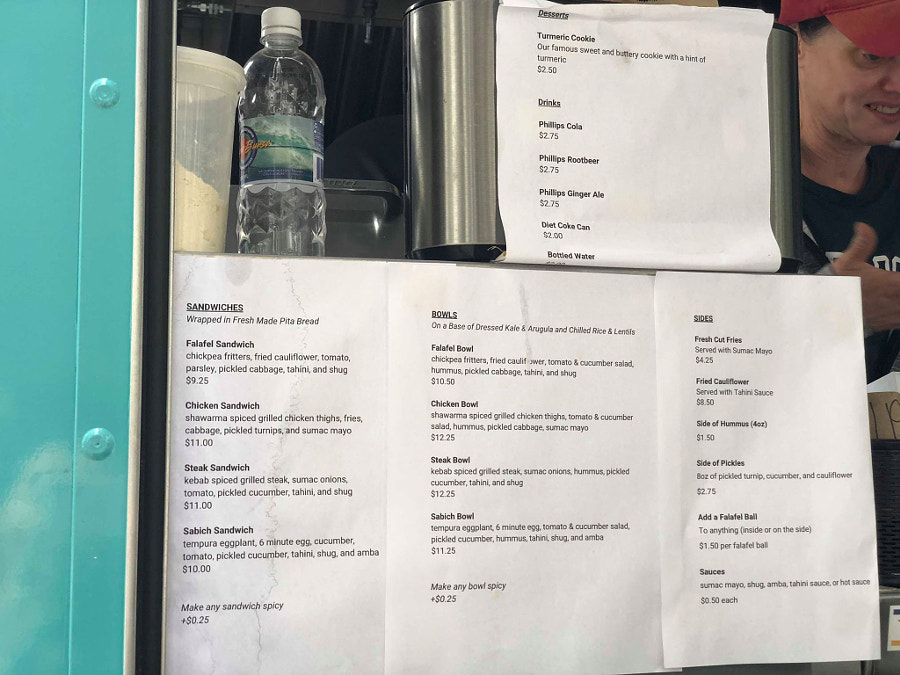 The food truck features Middle Eastern food and focusses on pita wraps and bowls. The dishes range from $10-$12 so fairly priced for the downtown lunch crowd. They have two vegetarian options including falafels and eggplants, but also two meat options including chicken and steak. 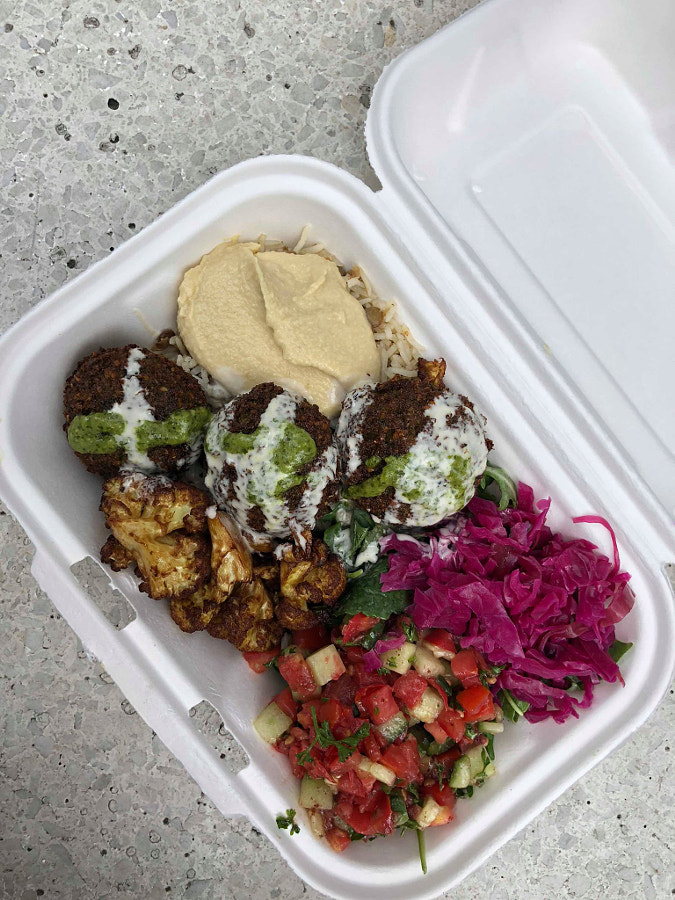 I decided to go for the Falafel Bowl which featured chickpea fritters, fried cauliflower, tomato & cucumber salad, hummus, pickled cabbage, tahini, and shug. All bowls have a base of dressed kale and arugula and chilled rice and lentils. Being a meat lover, this vegetarian dish was absolutely delicious. These are probably the best falafels I’ve had. The falafels were so crispy on the outside and moist and flavourful inside. The hummus was smooth and not too garlicky and the fried cauliflowers were again crispy and crunchy with a nice acidity. Even the pickled cabbage and salads tasted great. I thought I would be hungry given most of the dish were vegetables, but I was surprisingly full. Highly recommend this dish!

Based on the falafel bowl, I am already loving Superbaba. I can’t wait to come back to try their wraps and other dishes. There’s a bit of a wait during lunch hours, but they’re pretty quick after you place your order. Plus, the people are super nice. Will be back to try more soon!

Pros:
– One of the best falafels I’ve had
– Reasonably priced

Cons:
– Line up can get pretty long during peak hours

A trip to Bao Down ended up being a trip to Nuba. Since it was rather busy at Bao Down, N and I decided try Nuba. It’s been on my list of restaurants to try for some time now, but for one reason or another, I never made it here. Nuba offers Lebanese food, which I’m not very familiar with, so I was excited for this lunch.

The interior is pretty nice and hip. Their lunch plates are around $10-15, but will fill you up quite well. Dinner is a bit more pricey, so lunch is a good option to give it a try. The plates are beautifully presented and colourful!

I had the Chicken Tawook Plate, which featured grilled Mount Lehman chicken breast marinated in paprika, thyme, lemon, garlic confit and drizzled with tahini. All the lunch plates are also served with hummus, salad, pickled cabbage, olives, pita and your choice of organic brown rice or roasted potatoes. I had asked for roasted potatoes, but for some reason my plate came with half brown rice and half roasted potatoes…The chicken was moist and and tender. The seasoning wasn’t overwhelming, but rather simple. The pickled cabbage was very sour but was a good way to open up your appetite. The roasted potatoes were also delicious with a nice char on them. I quite enjoyed the hummus as it was drizzled with olive oil and I also asked for hot sauce on top which is optional. It was very smooth and paired well with the pita.

N got the Lamb Kafta, which featured grilled grain-fed halal lamb patty, seasoned with onions, parsley, and spices. I had a piece of this and it wasn’t too gamy in flavour. Very moist again. N quite enjoyed her dish.

This is the Pita that comes with your lunch plates. This was for the two of us and was the perfect amount for us to finish our hummus. Thinly rolled pita is rather bland by itself, but great paired with the hummus.

Overall, we were extremely pleased with the food at Nuba. The plates look small at first especially since you don’t seem to get a lot of meat (and I love meat), but I ended up being beyond full. Great place to feel healthy and they also have many vegan friendly dishes.

Cons:
– Can be a bit pricey

K introduced me to Afghan Horsemen, which I thought was a pretty funny name to be honest. I didn’t really know what to expect, since I did not know what Afghans really ate. I just assumed it would be something similar to East Mediterranean food, which was pretty true. K wanted to try out eating in the actual “Afghan Room”, so we rounded up a group of friends and reserved the room ahead of time. It’s pretty cool with all the cushions, low tables, afghan decorations, and dim lighting. After eating for a while though, my body got kind of sore though, since sitting cross legged and such isn’t as ideal when you’re trying to eat. A little cramped up too with the amount of people we had.

Anyways, J and I decided to try their platters, since we wanted to try a variety of their food. We got the Horsemen’s Special Platter, which came with appetizers that include Hummus & Sabzi Mast, Salata with Feta Cheese, and Whole Wheat Pita Bread, and a main dish combination of meat & veggie platter, with Boneless Chicken Shish Kebab, Lamb Shish Kebab, Lamb Shoulder, Baked Rice, Baked Eggplat, Dolmah (cabbage roll), Pakawra (batter fried potatoes), & Chaka (sour cream & yogurt dip). It’s prepared for two people, and a lot of the servings are divided to serve two, but it was still a lot of food! Should have probably shared it between three people to leave a bit of room for dessert. The Pita Bread was still warm and it was actually really good. It wasn’t too oily and was extremely soft. I really enjoyed the Sabzi Mast, which I’m still quite not too sure what it is, but I think it’s some sort of Spinach dip. The Hummus was good as usual too, but I found the Sabzi Mast to be my favourite dip. Our appetizer also came with a Greek Salad, which I disliked, since it’s got feta cheese, and I’m not a big fan of that. C, however loved it, and she devoured it for us! As for the actual main platter, the meat were all well cooked and delicious. My favourite was the Lamb Shish Kebab, as it was cooked extremely tender. The Chicken Shish Kebab was also pretty good, with lots of flavours. The Lamb Shoulder was tender and it was a huge piece between the two of us! C loved our Baked Eggplant, and since both J and I hated eggplants, that was perfect. The Baked Rice was a lot, and we couldn’t even finish it. It’s for sure a special type of rice, of which I’m not aware of its name, and it also had a special seasoning to it. It smelt good and tasted full of herbs though. The Dolmah, which are basically cabbage rolls, and I’ve tried those at Greek restaurants, was probably one of our least favourites. It just had a funny taste to it (which I beleive were the herbs), and the cabbage was also a little tough for me. Our favourite sides, were probably the Pakawra though. They were potatoes that were deep fried, but they actually didn’t taste too oily! The batter was really thin and it was fried to a very interesting texture. Good stuff! As for the other dishes, I never got a chance to try them, but everyone said that it was pretty good!

Anyways, service was great, with our server coming in to check on us. The room only allows us to stay for around 2 hours though, since everyone seems to want to reserve the room. Apparently, there are also supposed to belly dancers on certain nights and times. That would’ve been really cool. The room is shared with a few other guests though, but the tables are separated so you can still have your own conversations. Would I come back again though? Probably not in a while. I feel like this is a place to go try out for an experience, but it’s not necessarily food that I would enjoy eating often – at least that’s what I think personally. Go check it out if you haven’t though, since it’s a pretty cool experience with some interesting food!

This is kind of a late post, but during August, I went to English Bay to have a beach day with friends. Walking towards the beach, I was attracted by many different restaurants and snack shops along the way. And since I’m always hungry for food, I was craving some wraps and ended up in Falafel and Friends. The owner, I’m guessing, was really friendly and a little weird I would have to say, but he was pretty funny in a way. I got the Chicken Shawarama, and requested to have no tomatoes and parsley, and he started making fun of me. Weird. When my friend was paying for her wrap, she was digging for some change, and he said it was fine. Kind of weird in my opinion, but the food was quite good. Large portions as well!

It took me three visits to finally try this tiny little store, Garden City Kabob Grill, but definitely worth it! First time, I was 1 minute late and they closed, and second time, they weren’t open on a Sunday. They offer a variety of Mediterranean and Middle Eastern food, such as wraps, falafels, platters, and spring rolls. An interesting item they have on the menu is their Taho (Soy Milk Pudding). Apparently it’s really delicious, but I have yet to try it! It comes with tapioca pearls and syrup as well. I actually only decided to try this place because a friend recommended me to try their pudding! But I wasn’t craving sweets that day, and tried their food instead, and it’s really good! Took a little long for the food to be ready, and the seating inside reminds of a Subway or fast food restaurant with the tray and all, but the food is still great! No need to tip that way!