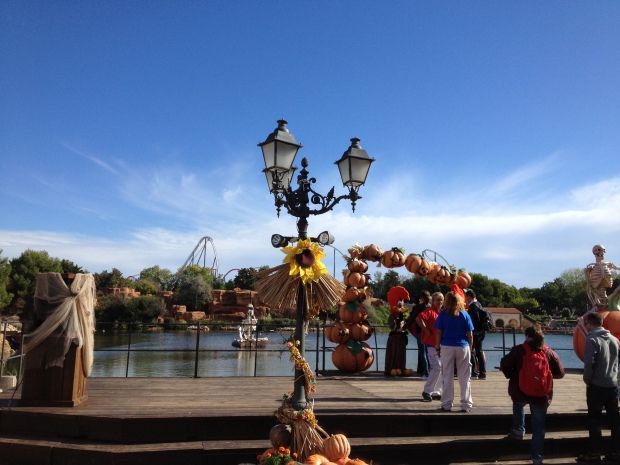 If you have extra time in Barcelona, and are rollercoaster fans, PortAventura is the theme park to head to! It was nearing Halloween, and PortAventura is known to decorate their theme park for Halloween. A group of us who love thriller rides decided to head there on a weekday to avoid the crowds. It’s located in the south of Barcelona in a city called Salou in Tarragona. We took the Renfe train from the Barcelona Sants Station near Barcelonetta and it took a little less than 2 hours I think. When we arrived, the park was all decorated and I really enjoyed it because there’s different themes based on regions of the world.

In the China themed land, there’s the famous Shambhala! This roller coaster is famous because its the fastest and tallest hyper coaster in Europe. It’s 76 m tall and has the longest drop in Europe at 78 m. Pretty impressive and a lot of fun! So much fun we went on this ride multiple times. PortAvenutra is also neat because it has a water park in the summer. I’m sure the park is a huge hit during the warmer months. They even had a haunted house and some other special attractions because of Halloween. Definitely worth going and the waits aren’t that long during weekdays. A tip for those going: they sell these Chupa Chup gummy candies at stores such as Carrefour and sometimes the bags will have a PortAvenutra coupon. Basically, if you buy two bags of these gummies, finish the bag, then keep the sticker coupon on the bag and bring it to the admissions office, and you can get two tickets for the price of one! A great deal where you only pay around 22.50 euros each in the end. 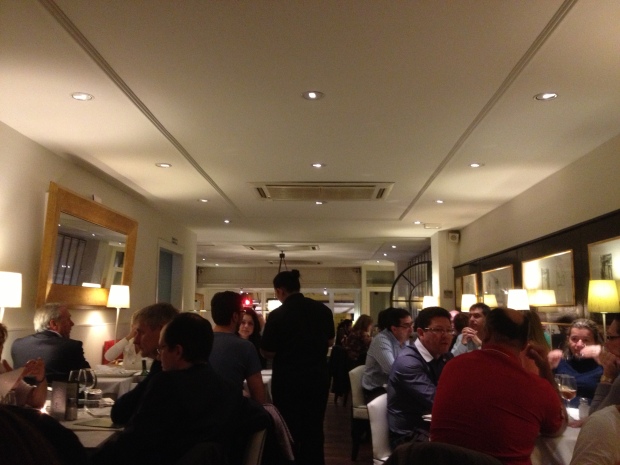 Anyawys, after a long day, we finally grabbed dinner back in Barcelona. We were at the park from opening till closing. By the time we got back, it was probably around 9 pm. We got out of the station, and found La Rita across the street. I had seen great ratings and the menu looked decent, so off we went. Inside, the place is actually quite fancy, but prices are affordable. It basically reminds me of La Fonda again, with good quality food, nice decor, but average prices. Funny thing is, I did some research later, and found that it’s owned by Grupo Andilana, which also owns La Fonda… No wonder!

C got the La Rita Hamburger. When we saw it, we were kind of confused. There was no top! A gourmet burger for sure. The meat was fresh and seemed homemade. The glazed onions were flavourful and the Havarti cheese was melted beautifully.

For myself, I decided to go for the Fideua Noodles . D actually ordered the same and it came in the same dish. We were both sort of confused when it came. They were paella noodles! We were both craving some typical pasta and I was craving my pasta to be drenched in a white sauce. I think we had some misunderstandings when we were reading the menu and got really confused. The menu actually wrote garlic sauce, so I thought it would be a white garlic sauce. You know..the typical seafood linguine in white sauce or some sort. But nope. I mean, the paella noodles were great and all, but I just wasn’t craving it. The aioli sauce came on the side as usual, and you could mix it in as you liked. 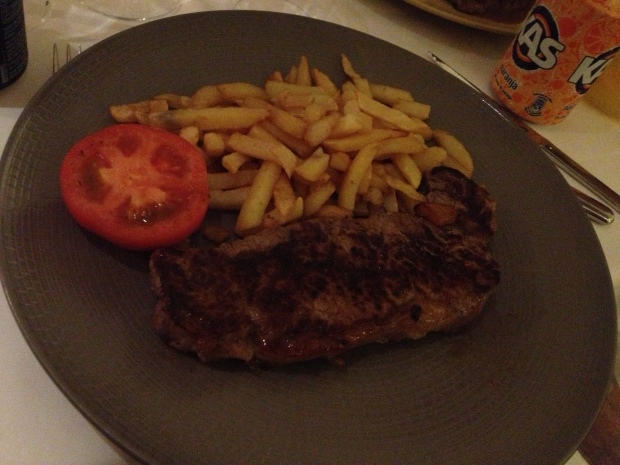 I believe this was the Iberian Fillet, or some sort of steak. S and a few others chose to order this. It was cooked perfectly to medium rare and was tender and juicy. It came with half a tomato and some french fries.

Overall, La Rita seems to have quality food. I think the only problem was I ordered something I didn’t want. If not, I’m sure I would’ve enjoyed my food much more. Everyone else did. La Rita actually serves typical Catalan food, so a great place to visit if you want to experience true Catalan cuisine. Prices were very reasonable and service was great as well!