I haven’t been to 4 Stones Vegetarian for many years, mainly because of how difficult finding parking is. We went on a Friday night and the place was packed! Luckily, we got a seat within 10 minutes. Dinner starts off with a choice of soup – herbal or vegetable. K went for the Herbal Soup, which didn’t smell too appetizing. It probably was pretty good for your health though. 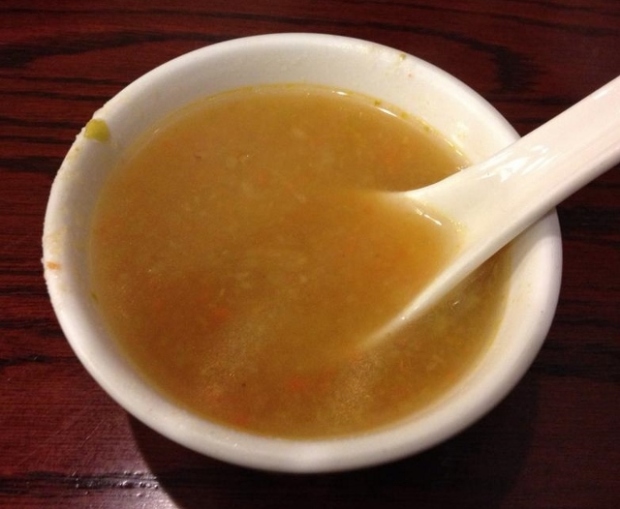 For myself, I went for the Vegetable Soup, which was average. It didn’t taste amazing, but I could tell there wasn’t any MSG used. Just plain vegetable broth, so it was pretty healthy.

The three of us both chose a main dish and made it into a combo. A combo comes with appetizers and a bowl of rice. Today’s appetizers included bean curd tofu and boiled veggies. It also comes with fruits, flax seeds, dried cranberries, and almonds for dessert. 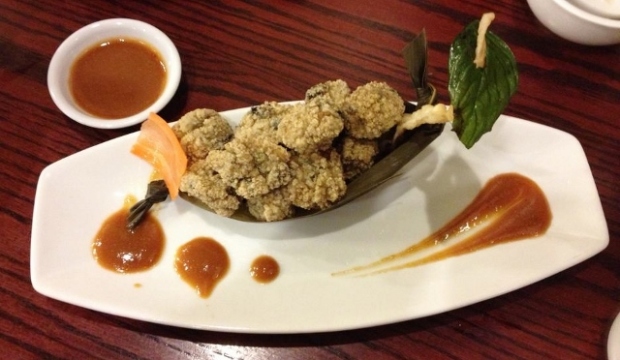 First, we shared the Deep Fried Veggies Oysters as an appetizer. I was surprised that the restaurant presents their dishes quite nicely. Typically, Chiense restaurants do not put much effort in presentation, but here, they definitely make an effort. The so called oysters were actually tofu. The batter is light and for some odd reason, it actually had some oyster flavour to it. It came with a satay-like sauce to dip. Very good! 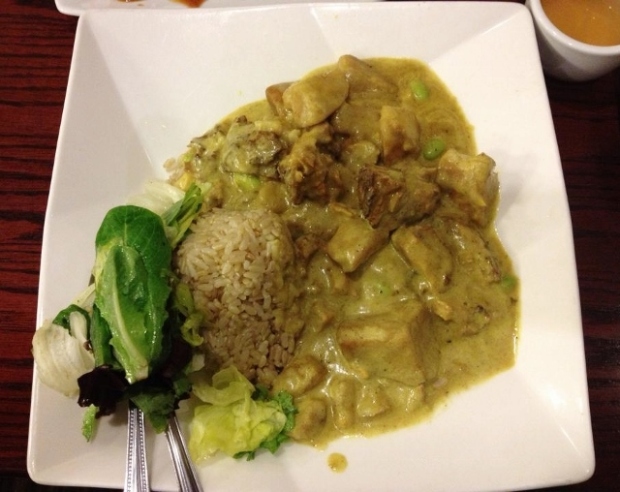 For the combo mains, I chose the Veggie Beef Brisket with Curry Sauce on Rice. Veggie beef brisket? Yup! The beef brisket was actually a type of bean curd. It actually had the texture of eating meat though! Very impressive. I found that the curry sauce was lacking flavour, but in general, the restaurant’s food is not very salty. I guess that’s a good thing health-wise.

E chose the Grilled Veggie Unagi, which came on a sizzling plate. The unagi was again made of bean curd, wrapped with seaweed and deep fried. It came with a lot of enoki mushrooms and basil leaves. I found that the unagi tasted more like squid instead though, since it had a chewy texture. 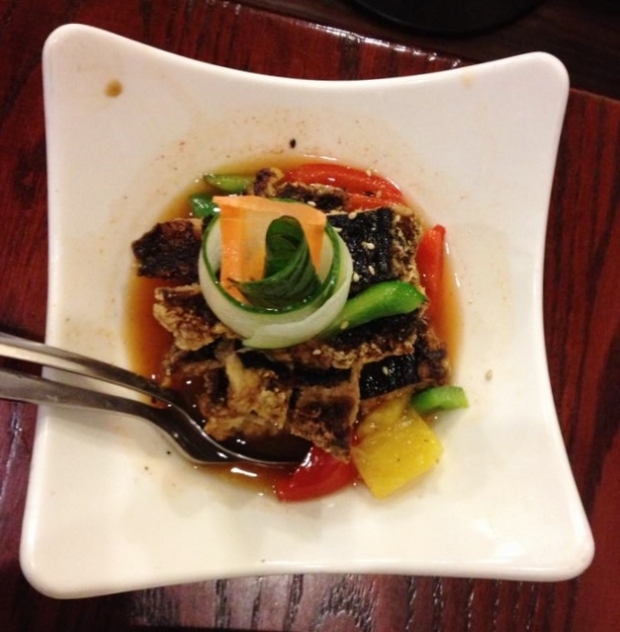 Lastly, K chose the Sweet and Sour Bean Curd Fish. Again, the fish was some type of bean curd and was layered with seaweed to imitate the fish skin. The sweet and sour sauce was not very strong, but the peppers and pineapples brought flavour to the sauce. I enjoyed this dish quite a lot.

Overall, 4 Stones Vegetarian is a great choice if you’re looking for Chinese vegetarian food. They have a large selection of choices, and shows that there are endless options other than eating salads. Reservations will most likely be needed for large groups, and they seem to cater to these groups quite well. Parking is also an issue, but other than that, they seem to have a loyal customer base since their food is quite consistent. Service is friendly, but also quite slow since there are not too many servers and the restaurant is always busy.

Adventure time with K and J! We were originally supposed to try some vegan lasagna at a cafe, but unfortunately it was closed for good when we arrived. We were around the Broadway neighbourhood, so we decided to walk around to find a different place. Problem was, we weren’t exactly in the restaurant populated area of Broadway. We kept walking and started to get hungry and we spotted Tera V Burger. We checked out the menu and learned that it was a vegetarian so we thought it would be perfect. The place is supposed to be like a fast food burger chain and their mission is to try and make a movement for people to start eating vegetarian meals. You order your food first at the counter, and then you take a seat and they will serve it to you on a tray.

Both K and J got the Barbecue Tempeh Burger, which they said was quite delicious. Lots of veggies and an overload of barbecue sauce. For myself, I got the Barbecue Tofu Wrap since I wanted a small snack. It was actually quite filling and I was very full by the end. There were lots of tofu, and again, lots of barbecue sauce. Although the sauce was needed since the tofu was pretty much bland, I thought that it was almost too much, since it got really salty.

Not a bad place to go for some vegetarian burgers and wraps. The place was pretty empty, but I guess it’s pretty new. They also offer a variety of salads, sandwiches, and drinks.

My friend brought me to 4 Stones Vegetarian Restaurant and I was really amazed at the dishes they were able to make! I’ve had vegetarian food before, but haven’t tried this place yet, and people had given 4 Stones great ratings. They have a large variety of choices and the fact that they could make chicken cutlet vegetarian was pretty cool. All their rice dishes were also made of brown rice, which made it really healthy. So if you want to try some healthy vegetarian food, or if you’re vegetarian and wanting some variety, this is the place to go!

Always heard about the Naam, but never got to try it till now! The Naam is a very busy vegetarian restaurant, and you can tell just by the lineups outside. Our wait was around 15 minutes I guess – not too bad. It’s located in the Kitsilano district on Main St, and is open 24 hours everyday! They say they only close on Christmas. That’s pretty crazy! Around half an hour after we got in, live music was also going on. We later found out that there is live music of folk, jazz, and blues every night from 7-10 pm. Not a huge fan of that type of music, but definitely an interesting and lively experience. The decor inside the restaurant is also very funky with wooden furniture and flooring. The restaurant has been given awards from Best Organic Restaurant to Best Vegetarian Restaurant, so definitely well known and worth a try. And the food is really full of veggies, and lots of it! The portions are huge and you can actually get full from all those organics. The burger that my friend tried had tempeh, which was basically a slice of tofu-like patty that is made of soybeans. Pretty interesting! So if you’re craving some veggies or just want to eat healthy, this is the place to go! Open anytime except Christmas, so no excuse to not get some vegetarian food!

Foundation is a vegetarian restaurant on Main St. It is probably one of the most hipster restaurants I have ever been to. And it’s not just the people working there. People eating there are also very hipster with a unique style of their own, but I guess most of the people strolling around the streets of Main are like that. Most tables were ordering the huge platter of nachos and there seemed to be a rave about how good they were, so we ordered it too. We only ordered the regular size and it was already huge! Really cheesy with beans and the side sauces make it even better! Definitely a must try! Servings are also quite large and I’m not even a big fan of veggies, but I definitely enjoyed my vegetarian meal here! If you want to enjoy a different dining experience – perhaps a hipster one, this is the place to go!