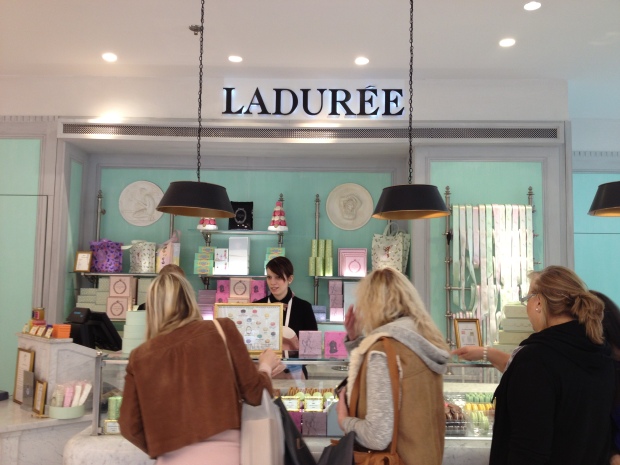 The famous Laduree of Paris! You’ve probably seen these macarons in their little pastel green boxes. I’ve been dreading to try these because people say they are the absolute best! We had saw the Laduree store in Milan, but we knew we were going to Paris, so of course get it from it’s home city! There are several Ladurees in Paris, with the one on Champs Elysees being quite famous. That one has a sit down cafe and is always packed with tourists. We found a Laduree pop up shop inside Printemps, which is another department store situated right next to Lafayette. Other than the pop up store on the first floor, they also have a sit down cafe on the upper floor. They offered breakfast there and had a specific time for customers who wanted to just dine on desserts.

Anyways, by the end of our shopping trip, we were kind of broke again… But i insisted we had to try these little macarons! I believe they are around 1.7 euros for each, which is decent if you think about the price of macarons in Vancouver. 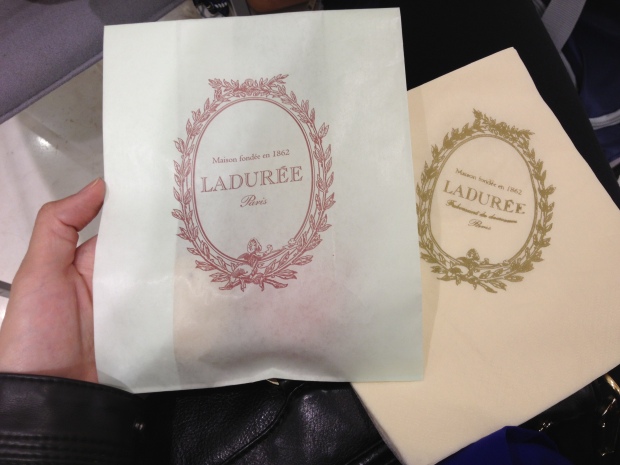 We ended up only getting two, since we didn’t want to carry them home. If you get less than 6, then they put them into a little bag.

I got the Rose and Orange Blossom flavour. Okay, seriously, they are so delicious! When you bite into them, the outer layer is so airy! And the other thing is that I find macarons in Vancouver to be too sweet, but these ones have just a subtle sweetness. The orange blossom is a must try! I haven’t seen this flavour elsewhere before. It’s got a hint of orange flavour and is so fresh! Absolutely love it. These little guys are a bit smaller than the macarons back in Vancouver, but I understand why people go crazy over them now!