The previous night after dinner at the terrible La Tradicional, we saw that Bodega Santa Cruz had a lot of people having drinks and tapas. We decided to go back the next afternoon for a quick lunch. It wasn’t as packed during this time, and we were able to find a seat, contrary to how many say you must stand. What I really enjoyed about Seville was the fact that they spoke Spanish, whereas in Barcelona, they speak Catalan and I often cannot understand the menu. In Seville, I was really able to put my Spanish to use and it seemed to work! Glad that I could at least sort of order food and have basic communication with the locals.

They have a chalkboard full of tapas, and most of them are only 2 euros, which is a pretty good deal. Almost all of the tapas also came with these little bread sticks. First, we had the Spanish Omelette, which is a very typical Spanish dish. I actually ate this in a sandwich at school a lot. It’s basically a thick egg omelette which is made of potatoes and then deep fried. I wish it was served hot, but I know that this is typically served cold.

Next, we had the Russian Salad, which was basically potatoes and corn. It had tons of mayonnaise which made it tasty. This was a very basic Russian salad. 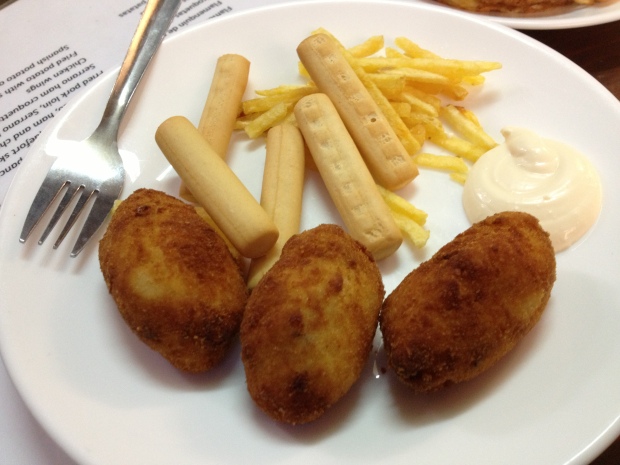 Croquettes were a must order. They weren’t as fresh as other restaurants, but were still decent. These also came with some fries and mayo. Again, the fries were thinly cut, something that seemed typical in Seville. 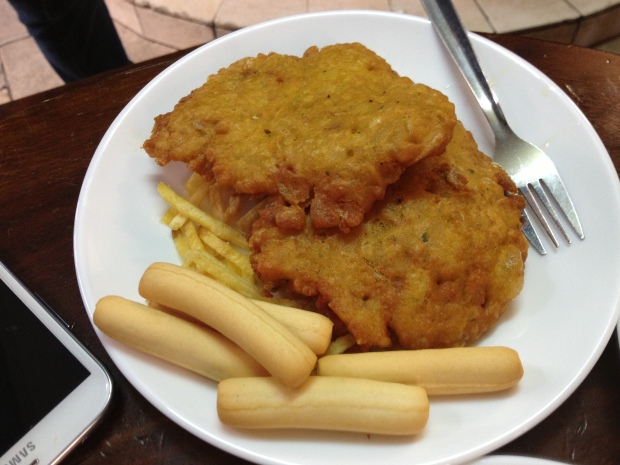 Someone suggested to order the Seafood Pancakes. They were sort of odd… They were basically a potato patty with shrimps in it. I believe they put the whole shrimp, still with shell in to deep fry, so we actually bit into pieces of shell. I guess you could technically eat the shell, but I found it a little odd. 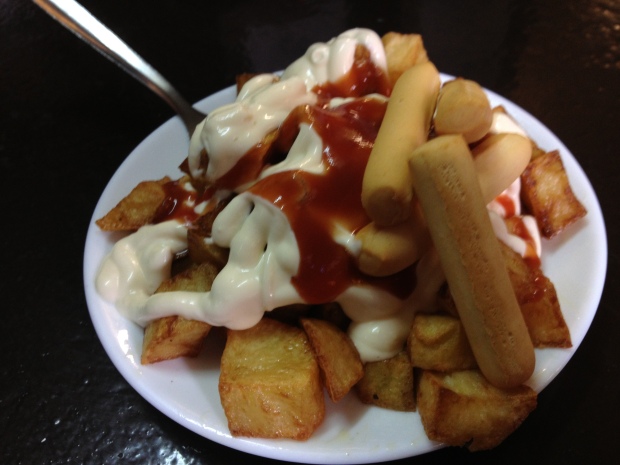 Patatas Bravas are also a must in Spain. This one came with tons of sauce. A mix of mayo and ketchup. These deep fried potatoes are always a pleaser.

And lastly, we had the Smoked Salmon Molletes. Andalucia is famous for molletes, so it was no surprise that we were having molletes in Seville. Lightly grilled buns with cream cheese and smoked salmon. Definitely not as a good as Ciudad Condal’s salmon montadito, but not bad.

Overall, Bodega Santa Cruz was a very down to earth bar to grab some cheap tapas. Don’t expect amazing quality, but you’ll get to sort of experience some typical Spanish tapas at a local joint. Next stop, Italy!