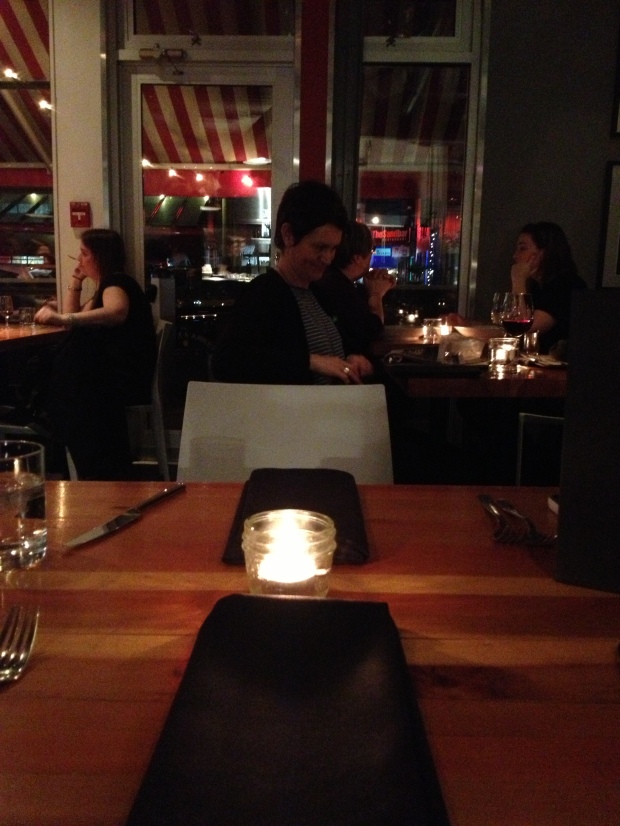 I know I’m months late for my Dine Out 2014 posts, but I’m going to write them anyway! For my first dine out, I went to Edible Canada with J. Edible Canada is located at Granville Island, and is well known for promoting local food. The Dine Out menu was for $28, with some menu items offered at an additional cost. We also chose to get the BC VQA Wine Pairings, which was an additional $16. I can assure that you’ll be pretty filled up by the end of the night!

The wines that came with our appetizers were white wines. Each dish comes with a specific wine pairing that is supposed to match your dish. I’m not a wine expert, so I won’t comment too much about them, but we did find that all our wines suited the dishes quite well.

J got the Crispy Humboldt Squid, which were cut into strips, rather than the typical calamari style we often eat. The squid were very tender and the batter was light and well seasoned. It also came with a bit of squid ink aioli which was a nice touch. 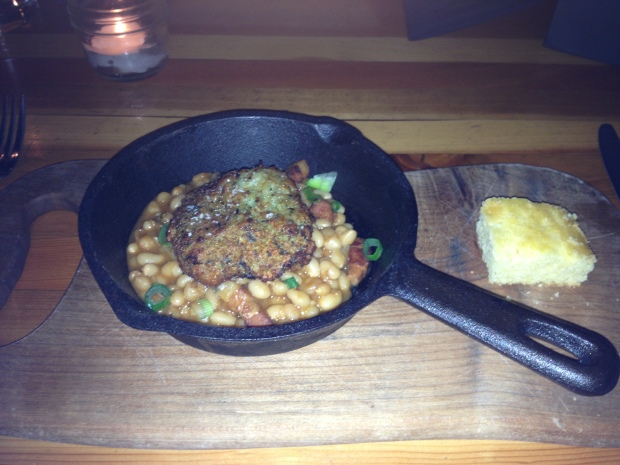 For myself, I got the Fried BC Mountain Scallops. I had originally thought that they were “typical” scallops, until the waitress warned me while taking my order that they were really lamb offals or testicles. Feeling adventurous that day, I ordered it anyways. Turns out they were quite delicious! They were tender and had a slight chew, and were lightly breaded and fried. It came in a pan of baked beans which accompanied the “scallops” really well.

For our main pairing, we were given red wines. Perfect, since we were both having dishes with meat.

J added an extra $20 for the Grilled 6oz Canadian AAA Filet Mignon. It was cooked to medium-rare as requested with a beautiful pink interior. The meat was tender and juicy. 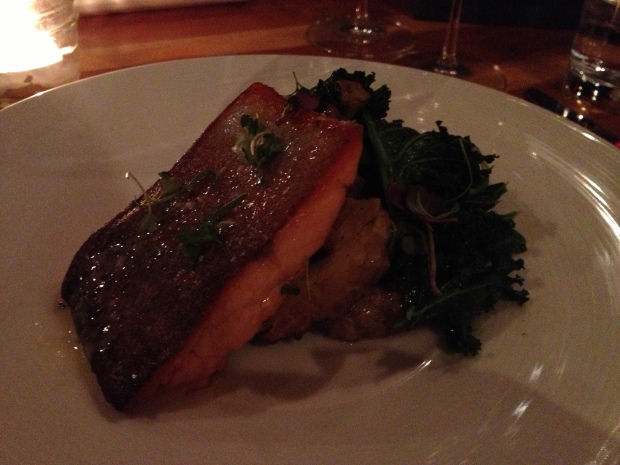 For myself, I chose the Seared Lois Lake Steelhead. I like to order fish when I dine out, since I can never cook fish well. This was absolutely delicious! The steelhead was so moist and the skin was seared beautifully. I normally don’t like to eat the skin on fish, but I devoured this! A must order! It also came with some kale, which was lightly seasoned and made a great side of veggies. 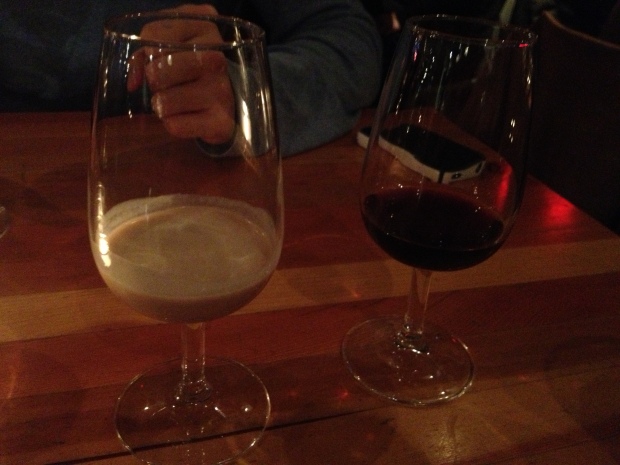 Lastly, for our desserts, we also got some dessert wines. For my dessert, I got a Whiskey Cream, which I found extremely strong! It’s like a creamy coffee cream flavour, but the whiskey itself was very strong so I felt like you had to really sip on this.

J got the Canadian Butter Tart, which he said was quite good. 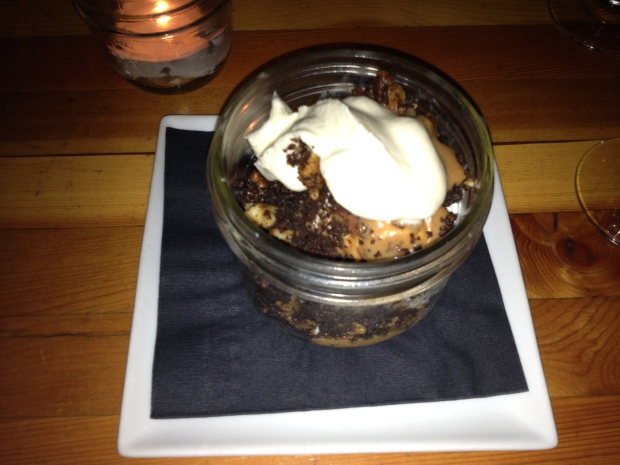 I came here looking forward to the Bacon Ice Cream Sundae. Unfortunately, you needed to add an additional $2, but I did it anyways. Edible Canada is known for their bacon ice cream, but I was actually slightly disappointed. It was delicious after the first spoon, but halfway through, I found it too sweet. It’s filled with a lot of dulce de leche, and along with the brownie, it’s just too sweet for my liking! The bacon and ice cream is a nice pairing though, just because you get a bit of saltiness and sweetness. Still, I don’t think I would order this again. 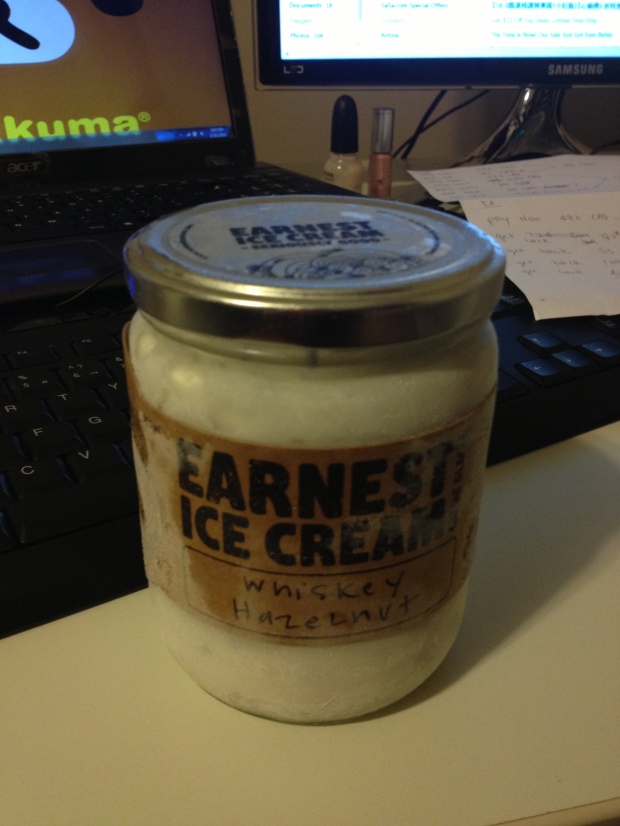 Edible Canada also has a retail store next to the restaurant. They sell a variety of local goods. They essentially sell Canadian gourmet foods here, although they focus mainly on BC goods. One local goodie they sell are Earnest Ice Cream products! So of course I went home with a jar of Whiskey Hazelnut Ice Cream. Quite pricey for ice cream since it came to around $10. That was already after using a 10% coupon that Edible Canada provides you on your receipt after you’ve dined with them. However, the ice cream is pretty damn good. I don’t know if I would pay that price for my every day ice cream though. Probably a nice treat once in a while! For those that don’t want to trek all the way to Earnest Ice Cream, you can now shop at after your meal at Edible Canada!

All in all, Edible Canada was a nice casual restaurant with quality food. I like how they use local ingredients, so you know that you have the freshest ingredients. Service was average, but as usual, you can’t expect much during Dine Out, since it’s always busy. They did their regular check ups, so I was quite pleased with that. To add on, we were late for 30 minutes, and they still took us in and didn’t rush us out, so we were very happy with that. Looking forward to coming back again!