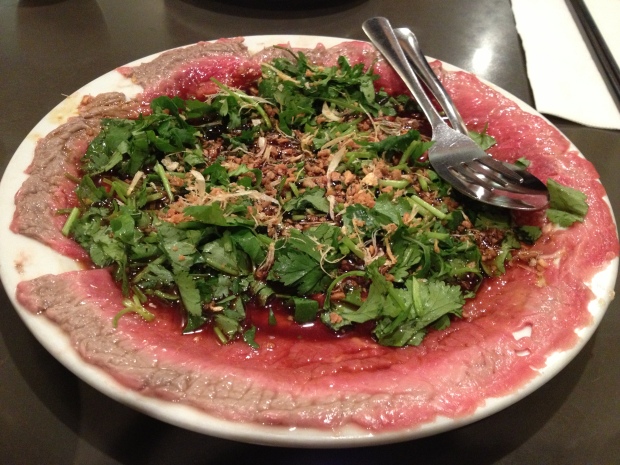 I’ve been to Phnom Penh before, and although I really enjoyed it, it’s a bit far for me. When M and J suggested going there though, I said sure why not! However, when we got there at around 7pm, the place was packed as usual! We were told to wait an hour… I would’ve probably left, but M and J had never been, and we made a trip all the way down, so we waited. We ended up going over to Besties to get some German sausages first, which I wish I took pictures of… Next time! Anyways, by the time we got back, which was around an hour later, our seat was ready. We were all half full by now after the snack, so we tried not to order too much. I suggested we get their famous Marinated Butter Beef. I absolutely love this dish! The beef is so soft and tender! The sauce is what really makes the dish, but I do find it a little too acidic. It’s really sour but good at the same time. This time, I tried eating it with the cilantro (although I hate cilantro). Surprisingly, it worked really well together, and I didn’t mind it as much. A must order here.

Next, we hard another famous dish – the Phnom Penh Deep Fried Chicken Wings. People say it’s the absolute best chicken wings, but I can’t say if they are the best. They are pretty damn good though, with a light batter on the outside, and a great salt and pepper seasoning. I’d probably wait half an hour for this, but probably not an hour again. We couldn’t end up finishing all of this, so M packed them home. This was the portion for a large size.

If you look around, you’ll see that most diners order somewhat of the same dishes. The Filet Beef Luc Lac on Rice with Egg is again a very popular dish. It seems like such a simple dish, which anyone could make at home, but that filet beef is so delicious! The meat is so soft and tender and the sauce makes the dish perfect. Break the egg yolk and mix it with your rice, and you’ve got yourself a perfect comfort dish.

We decided to get one more dish and asked our server to recommend something. He suggested us to try the Chiu Chow Fried Oyster Cake. It was a huge portion, and at first bite, I thought it was average. I wouldn’t say it was amazing, but then soon after, J mentioned that it tasted disgusting. M and I were still eating it, and she began to describe how sticky it was. Indeed, the batter was very sticky. It was a clear goo, which is very common in say Taiwanese oyster cakes. The more she described it, the more we felt disgusted by it. I could understand that odd taste she was describing too. I’m not a huge fan of Taiwanese oyster cakes since they have a very gooey texture compared to some other oyster pancakes, so this literally eating a huge piece of goo. We ended up barely finishing half of this pancake, since the texture just really didn’t do it for us.

Overall, I had another good meal at Phnom Penh. Next time, I will stick to their signature dishes though. It seems that some of their other dishes are either a hit or miss. Look around and see what others have on their tables, and it’s probably a good one. The wait for an hour is a bit of a stretch for me though. Definitely would not wait for more than half an hour next time.

Check out my previous on Phnom Penh: https://everydayisafoodday.com/2012/07/18/phnom-penh/

One thought on “Phnom Penh (Revisit #2)”