Our friend is a huge CN Blue fan, and apparently one of the member’s father has a restaurant. I know nothing about the band, but she insisted we must go. Off we went to Hwang’s Eel Restaurant, which is as the name says, famous for grilled eels! 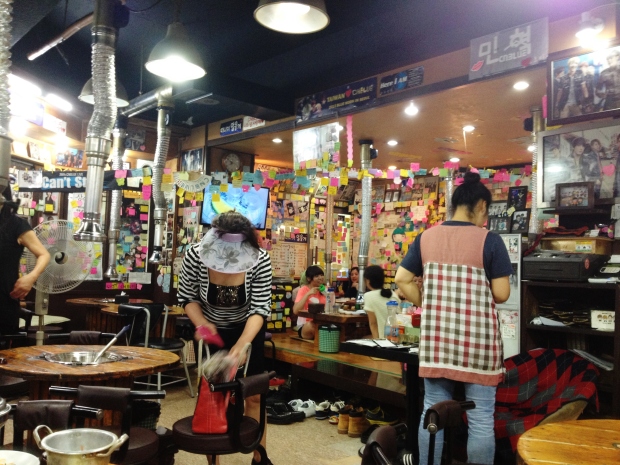 The restaurant isn’t exactly glamorous looking or anything. above each table is a vacuum looking tube to suck our the smoke from the grills. As you can see, there is an area where you can sit on the floor. That area is basically the hardcore fans area since you’ll find tons of post-it-notes all over the walls with the fans comments.

All around the restaurant, you will find pictures of the band. I guess if you are a die hard fan, this will definitely get you excited.

First, they brought us the appetizers. You each get a seaweed soup, which was probably the worst I’ve had on this trip. Then, you get some sort of a garden salad, where the leaves were wimpy looking. You also get some sauces for dipping later, and some lettuce for wrapping you grilled items.

When we tried to place our order, the server basically said you must order 2 orders of the grilled items. When we said no, she was just pissed off and said we must and walked away. Service here is definitely lacking and I felt like the servers hated their jobs here. The servers are all older aged ladies. In the end, we had to get 2 orders, and we got the Beef Rib Eye. Honestly, this looks so little for 2 orders! It was 12,000 won for one order, so it came to 24,000 won for this small plate! Pricey!

We decided to not eat too much since the prices weren’t that cheap here. We added the Steamed Egg as well to just fill ourselves up, since it was only 4,000 won. The steamed egg was poorly made however. It was really watery in the center and lacked flavour. Something that shouldn’t be too hard to master… 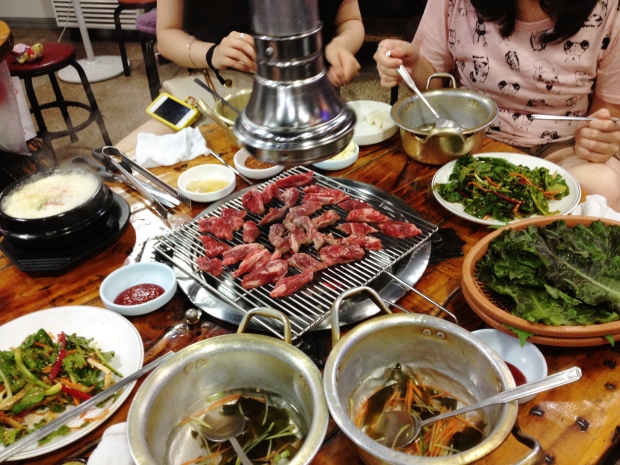 The meat ended up being decent wrapped in the leaves and topped with the ssamjang sauce (spicy soybean paste). However, I honestly don’t think the food is worth the prices here. It’s just average food with poor service. If you’re a fan of CN Blue and must come here, then don’t be expecting much from the food. If you’re not a fan, then I would advise to avoid this restaurant.