Kaneda closed down a few months ago, and everyone at work was pretty happy except for StevieD. When we found that the new restaurant, Masa, took over the spot, most of us were pretty skeptical about it since we thought that it would probably be the same management team. Since your restaurant choices at lunch start to limit after you’ve tried most of the ones around work, I suggested that we should go give it a try. StevieD and E joined me on this adventure. Masa is located above Mac’s convenience store and next to Joey’s on Broadway. 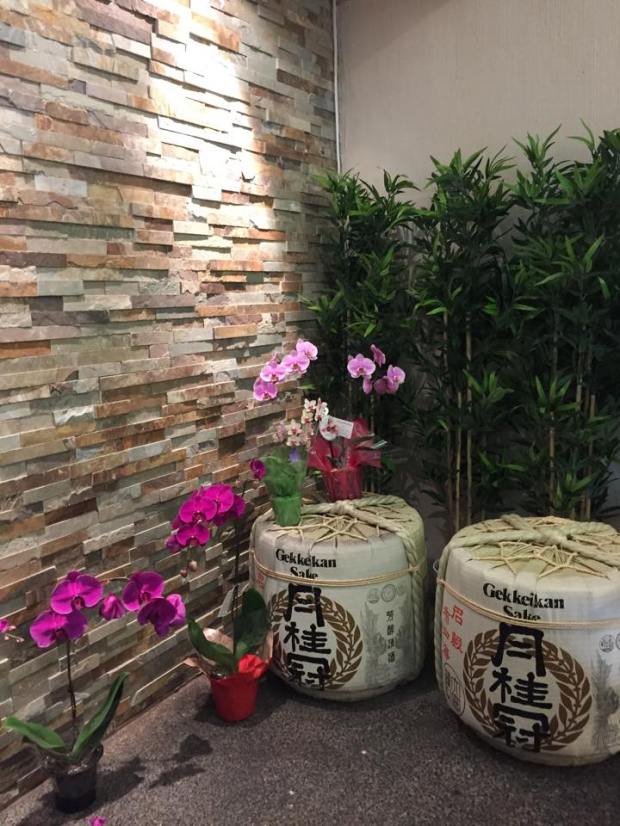 When we visited, it had literally opened for less than a week or so.

We immediately noticed some changes. They kept the section dividers, but it seems like they have done some renovation on the seats and decor. The cutlery has also all changed and it looked pretty upscale, with your own tray and all. Management has also changed to what seems like a Korean owner and staff. Goodbye to the weird old school music they used to play; they now play more upbeat music.

The menu has also changed quite a lot, and we all noticed that the prices were much higher than the previous Kaneda. It’s not unreasonable, but you can tell that they are trying to be a more upscale Japanese restaurant. During lunch, they have their so called “lunch courses”. All lunch courses are served with miso soup, 3 side dishes and a “special deep fry”. My 3 side dishes and special deep fry never came, but at the time I wasn’t sure if mine came with it, so I didn’t want to make a nuisance. Looking back at the menu now, my course should have came with those dishes. Well, at least my Miso Soup came… This one had lots of kelp but no tofu.

Anyways, I chose the Sushi Course, and your first choice is between a Sunomono or Salad. I chose the Sunomono, which was nicely presented and had a slice of cucumber, cherry tomato, julienne carrots, and alfalfa. The second dish was a choice of tempura or yakitori. I chose the Yakitori and it turned out to be chicken. This was pretty good with two skewers with two big chunks of meat. Nothing too special with the sauce though

And then the wait began… We soon realized that everyone’s sushi dishes were not arriving. It was already 45 minutes into our lunch, and we were getting impatient since we wanted to get back to work. They should know that most people coming in for lunch work around the area and need quick lunch services. Well, finally after letting our server know that our food still hasn’t come yet, our sushi arrived. Mine was part of my lunch course and it had 8 pieces. Four pieces were California Rolls and the other four pieces were nigiris that the chef chose to make. This included Salmon, Tuna, Ebi, and a Smoked Salmon Oshi. The fish was much more fresh compared to Kaneda, but it didn’t blow my mind. I would be happy eating at Sushi Van for a similar or cheaper price.

E got the Chicken Yaki Udon which came with vegetables and chicken. This was quite a large plate, but I thought it lacked in ingredients. From the looks of it, it looked like it didn’t have much sauce as well. Nonetheless, E said it was okay.

E also got the Tamago Roll. This also took 45 minutes to arrive. Seems like they only have one sushi chef? But seriously…this shouldn’t take long.

StevieD got the Best Top 3 Roll Combo. This included California Roll, Dynamite Roll, and Spicy Tuna Roll. It was presented quite nicely and StevieD commented that they were pretty good, but he had to eat all of this in 15 minutes. He also commented that it was quite pricey for similar quality to Sushi Van.

Overall, we were quite disappointed with Masa. It’s not that the food was terrible, but it also wasn’t above average. I’m hoping that the slow service was because they just opened, but if they don’t figure that out, then they are going to have angry customers leaving. StevieD for one has already banned the restaurant it seems… I may give it another try in a few months, but with so many other options around town, it may not be for a while that I return.

Cons:
– Service was extremely slow (perhaps they just opened)
– Slightly pricey for the quality of food