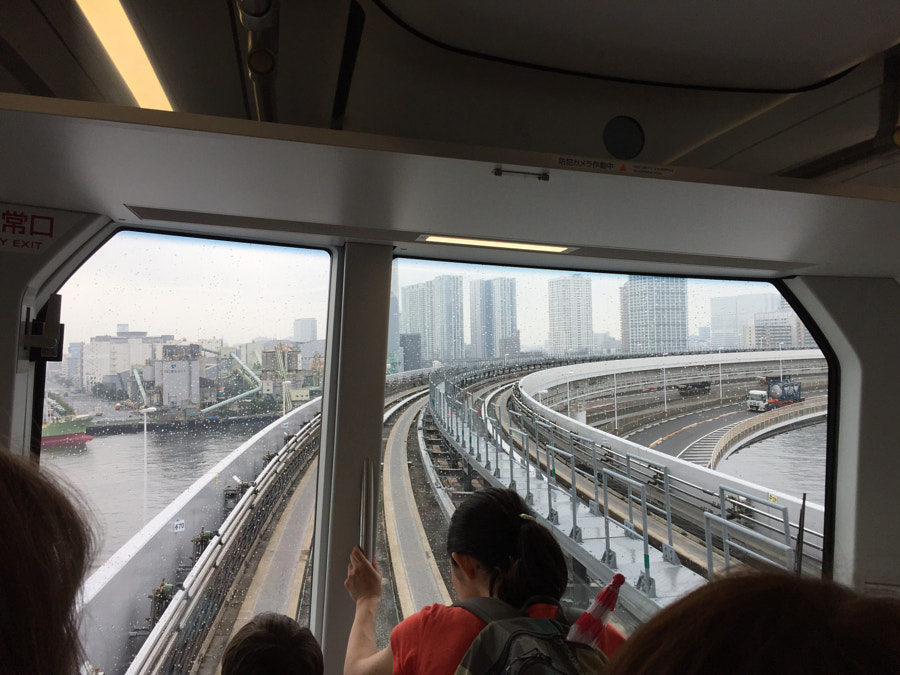 Sadly, it was our last full day in Tokyo. The next day we would be traveling to Osaka. I felt like we had visited most of the districts in Tokyo but there was one area that I had visited in the past that S said he had not. This was Odaiba (お台場), a man-made island in Tokyo Bay. It used to be man made fort islands, but today it is a futuristic residential and business district famous for shopping and entertainment. For me, I find that this area is very modern and a relaxing spot for a date or with the kids. To get here, you need to take the Yurikamome, which is an automated elevated train (sort of like our sky train in Vancouver). You need to start from Shimbashi station and it will get you to all attractions in Odaiba. This is not covered by the JR pass, so you will need to pay the fare (which I believe is slightly more than usual). If you will take the train more than two times, then you can buy the 1-day pass. However, since we walked throughout Odaiba instead, it was cheaper for us to pay single fare as we only took the train round trip. What I really enjoyed was that this train crosses the Rainbow Bridge which gives you beauitful views of the harbour and waterfront. Unfortunately, it was drizzling that morning, but it is still beautiful to see. So be sure to grab a window seat or the head of the train! The whole ride will take around 15 minutes from Shimbashi. 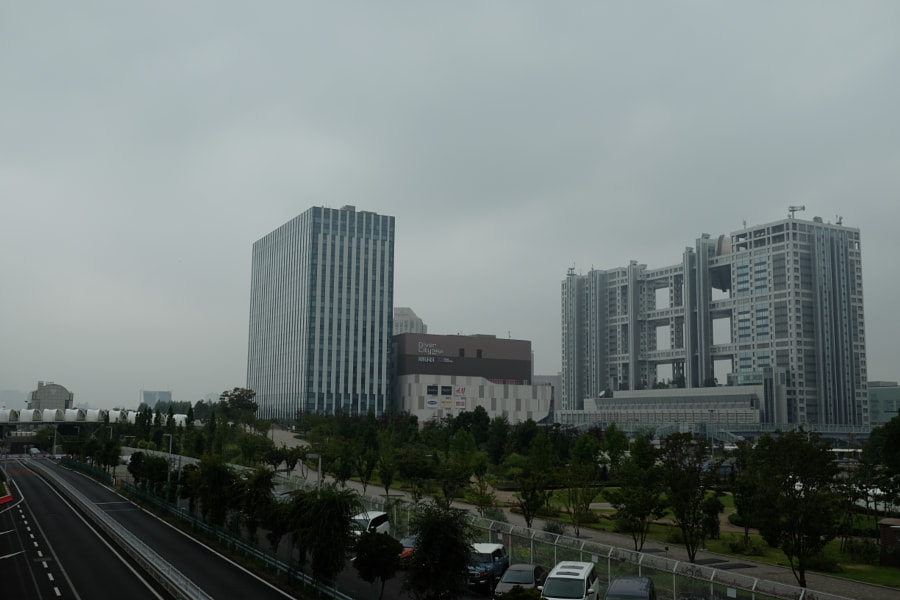 Once we got off the train, we immediately saw the futuristic looking Fuji TV Building. This is where the headquarters of the nationwide TV station. I believe you can go inside as they have some exhibits and shops, but we skipped this. 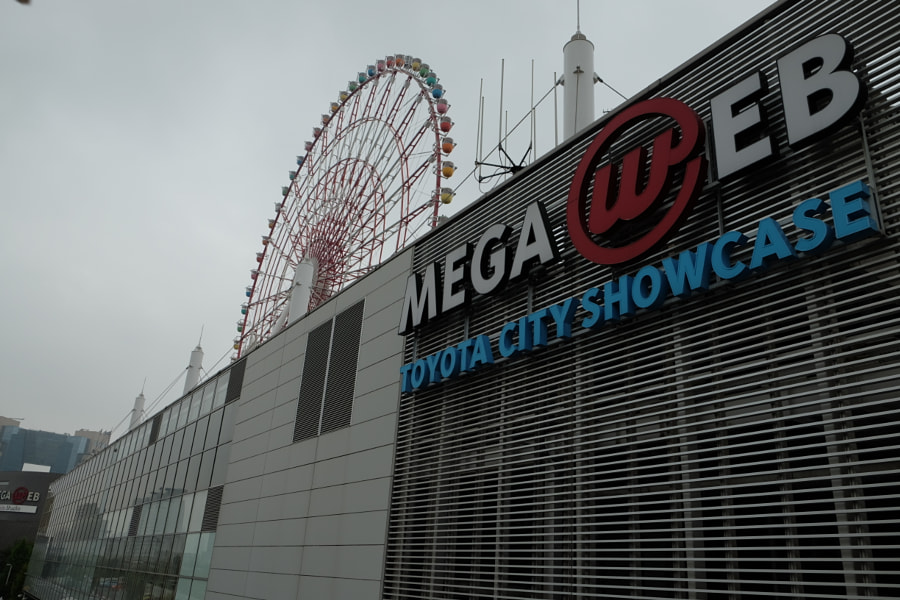 Instead, because it was fairly gloomy out, we were worried that it may start raining. We decided to head towards Palette Town which is a complex that includes the Toyota Mega Web. 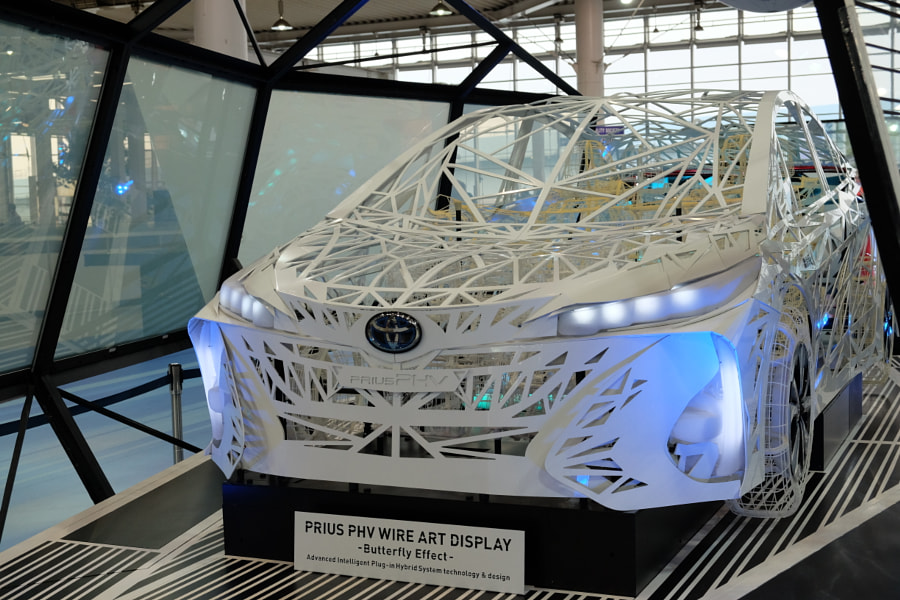 Mega Web is perfect for car lovers as it is a showroom for Toyota’s latest models and technologies. Admission is free and you can check out some pretty cool cars here. 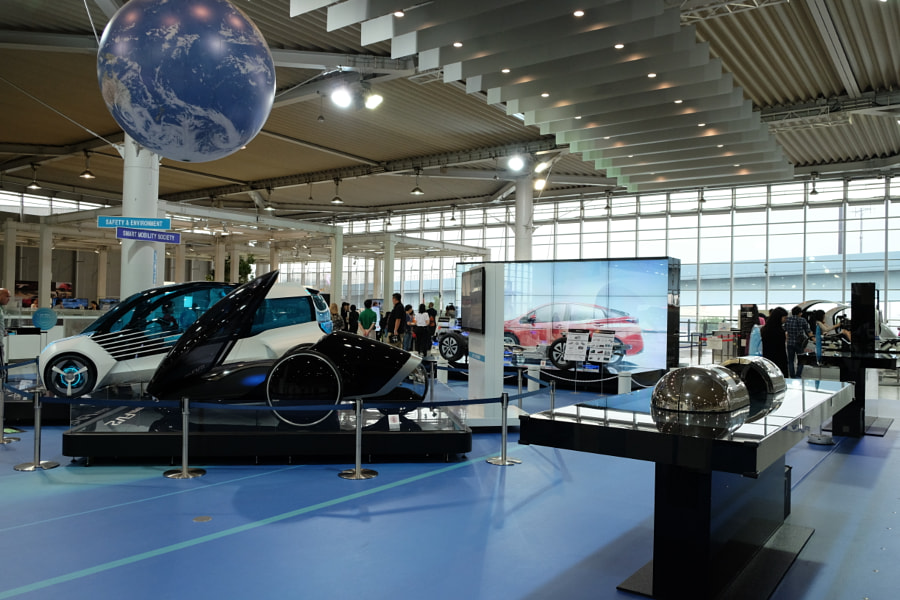 I was in awe with these super futuristic cars. Seriously…I thought they looked like the vehicles in the Jetsons! 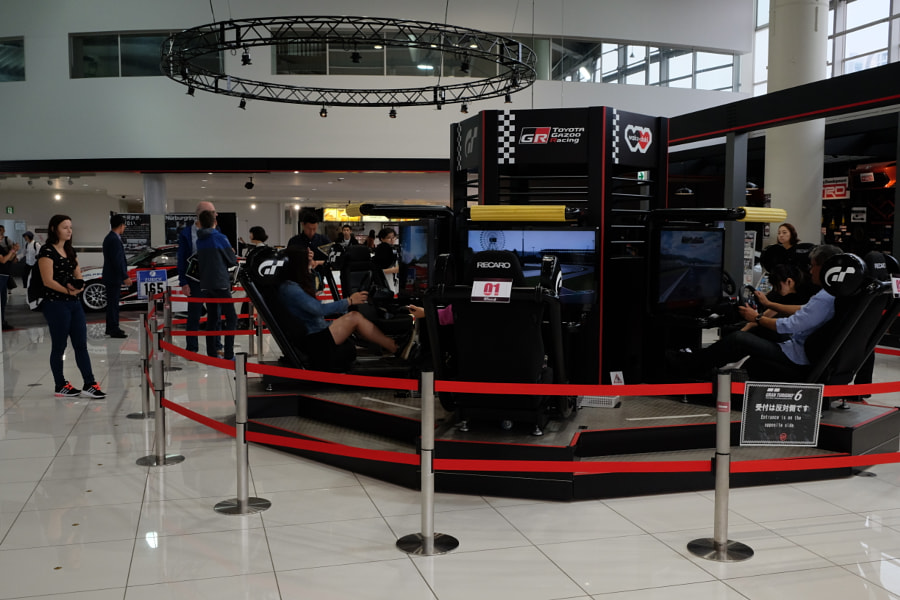 There are also a lot of free activities that you can check out including this racing game. Many of the games are also free. There is a test drive of cars that costs 300 yen, but you also need a driving license that’s valid in Japan. 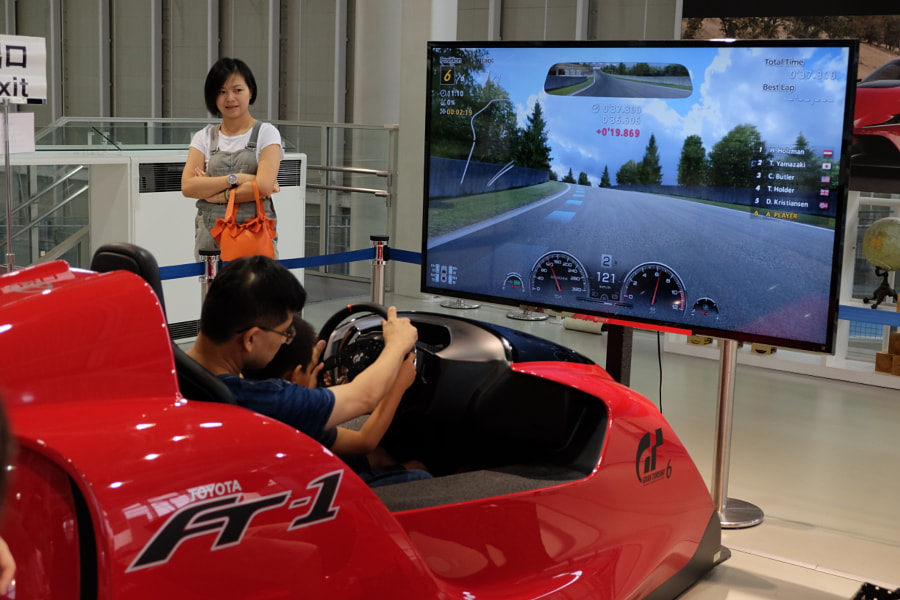 They even have segways you can try out, but we opted to play this racing game instead. This is great for kids, but we had a good time playing it too! 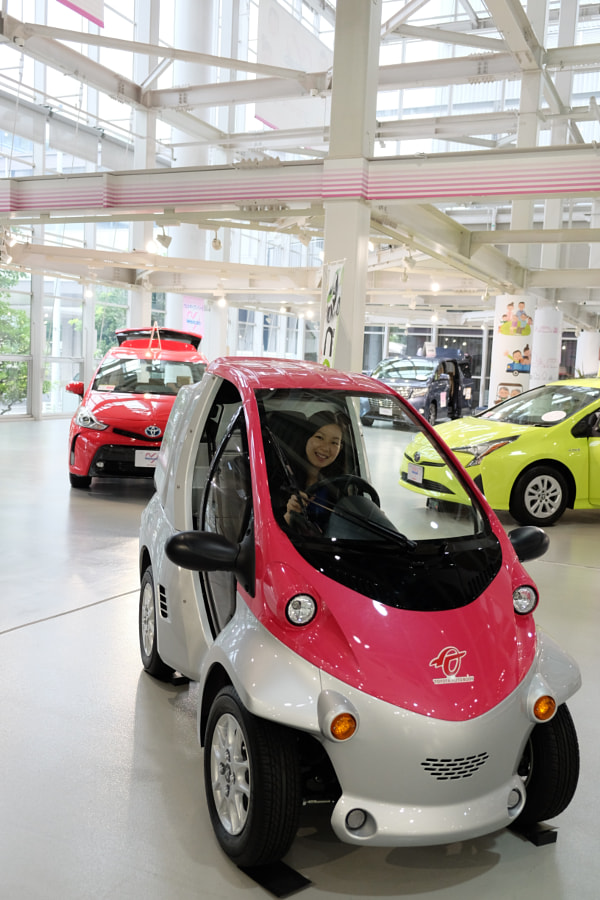 On the bottom floor, there are more consumer friendly types of cars. Cars that you would see on a normal day. But hey, this car I tried out was pretty cool! I guess this is perfect for the crowded streets of Japan! As we started getting hungry, we decided to grab lunch. Unfortunately, you will not find eateries on the street like the rest of Tokyo here. Most of the restaurants are inside these malls. We decided to check out Venus Fort which is a shopping mall that is decorated like Europe. Think Paris or Venetian Hotel in Vegas. They also have a Jelly Bean outlet store here if you’re into shoes! 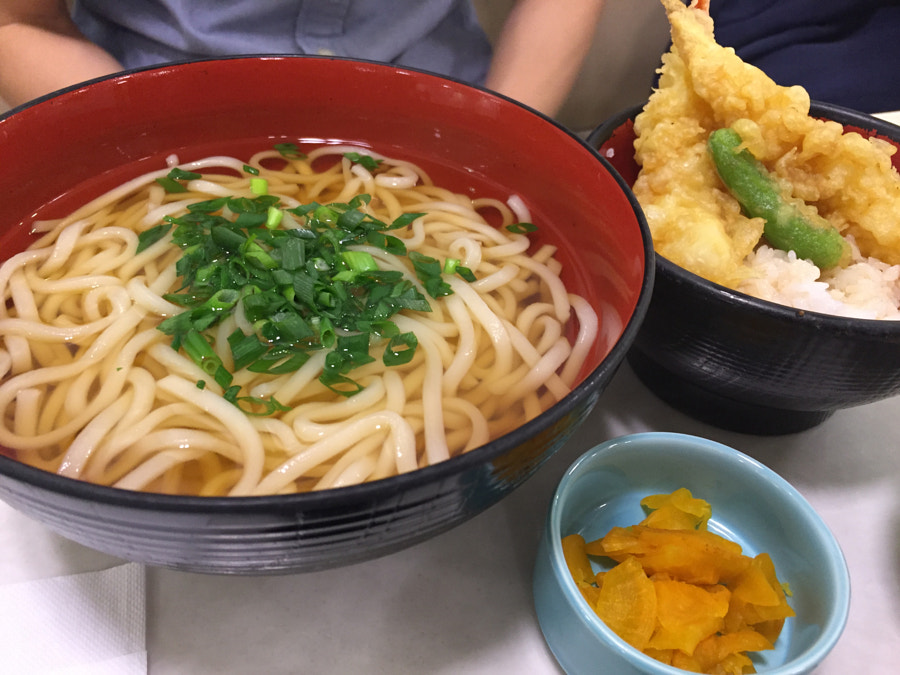 We went to their food court inside the mall and settled on one of the udon stalls. Prices here are slightly higher than outside, but still affordable for the quantity you get. S got a Hot Udon Soup with Tempura on Rice Set. Quiet a lot of food and surprisingly quite good for a food court stall. 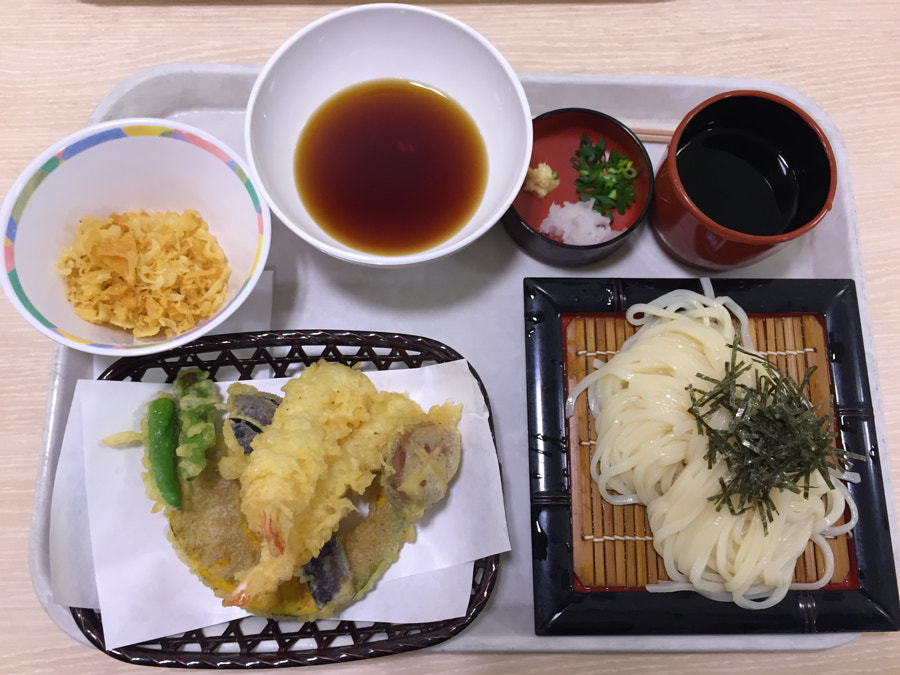 For myself, I got the Cold Udon Set with Tempura. The cold udon was refreshing and very chewy, just the way I like it. Tempura was not bad as the batter was quite light and flaky. Not bad! 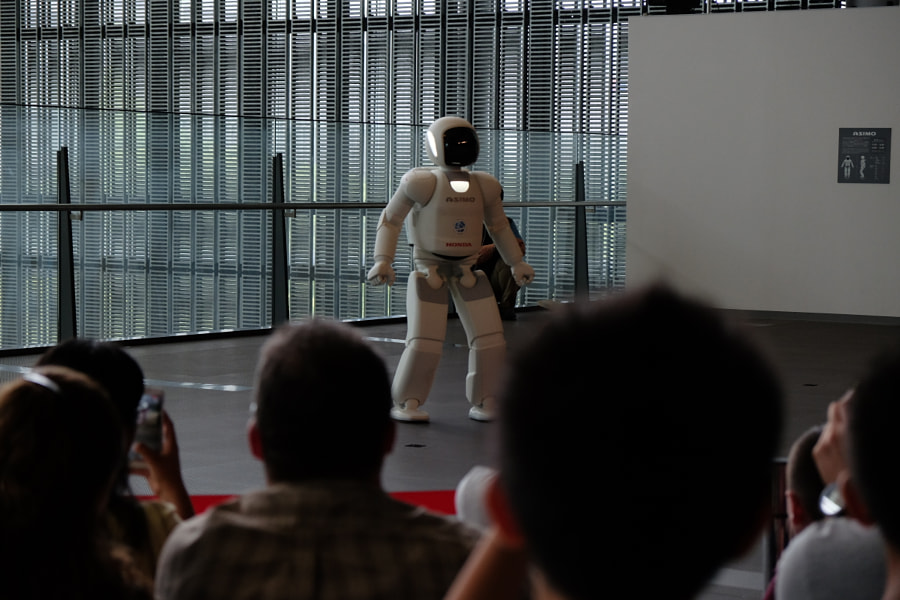 After lunch, S suggested we go to the National Museum of Emerging Science (日本科学未来館). To be honest, I was very hesitant about visiting the museum since it was a science museum and I was thinking “don’t we have a Science World back in Vancouver?” and “why am I visiting a science museum on vacation?” Well somehow, S convinced me to go and we ended up paying 620 yen for admission. The museum is also known as the Miraikan and is actually bilingual although many of the activities are mostly done in Japanese. However, I have to agree that the robot (Asimo) was pretty cool. I have never seen a robot in motion in real life, so this was definitely something cool. We also saw a lot of other robots that were made to replicate human beings and the technology has definitely advanced so much. If you are into robots and science, this is the spot to check out. I mean, Japan is known for robots, right? 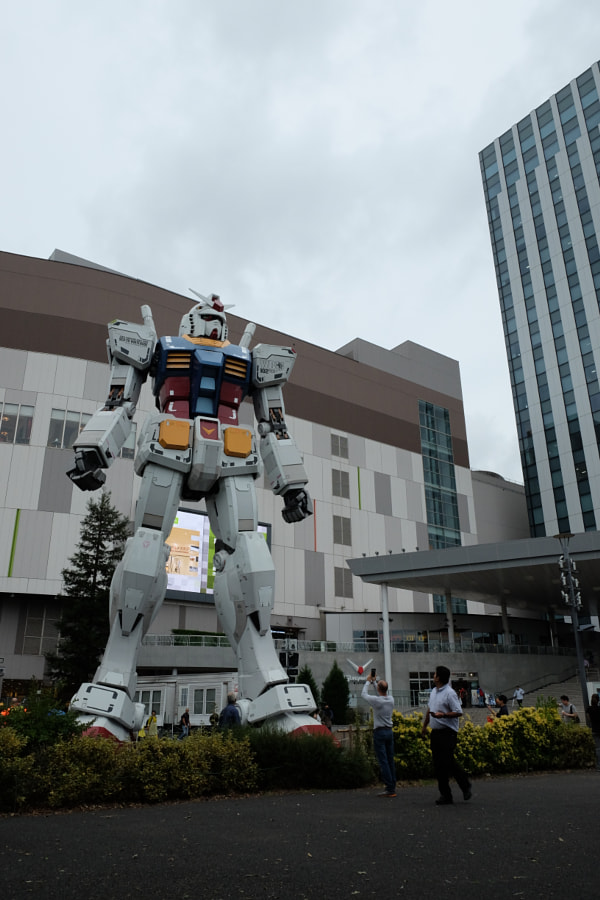 After the museum, I suggested visiting DiverCity Tokyo Plaza since I thought S would be interested in seeing the Gundam statue. This is a huge statue and it also blinks at certain times. I’m not an anime fan, but this is still very cool and worth checking out. My understanding is that this statue has now been removed and there is a new statue being built that will be released later this month! Exciting! To finish our day at Odaiba, I suggested we check out Decks Tokyo Beach, a shopping mall, and visit the Takoyaki Museum. I’ve been here before and knew there isn’t too much to see, but it’s still a fun spot and a place to sit down and rest after a day of walking. 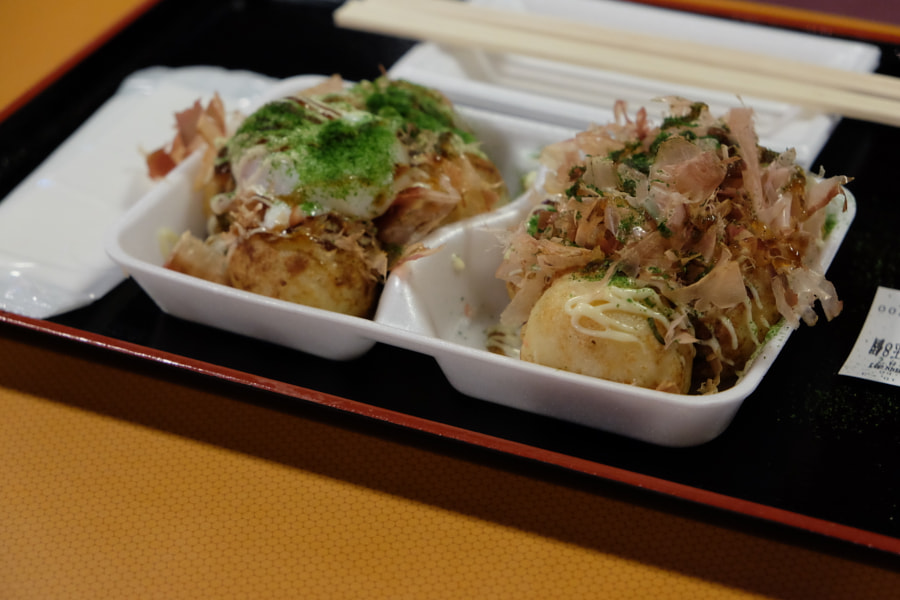 In the center, there are many stalls that sell different takoyakis. These takoyakis are by no way better than the ones you can get in the streets of Tokyo and Osaka. However, they have some creative flavours. We chose two which included the original and one with a soft boiled egg on top. They made a nice snack! 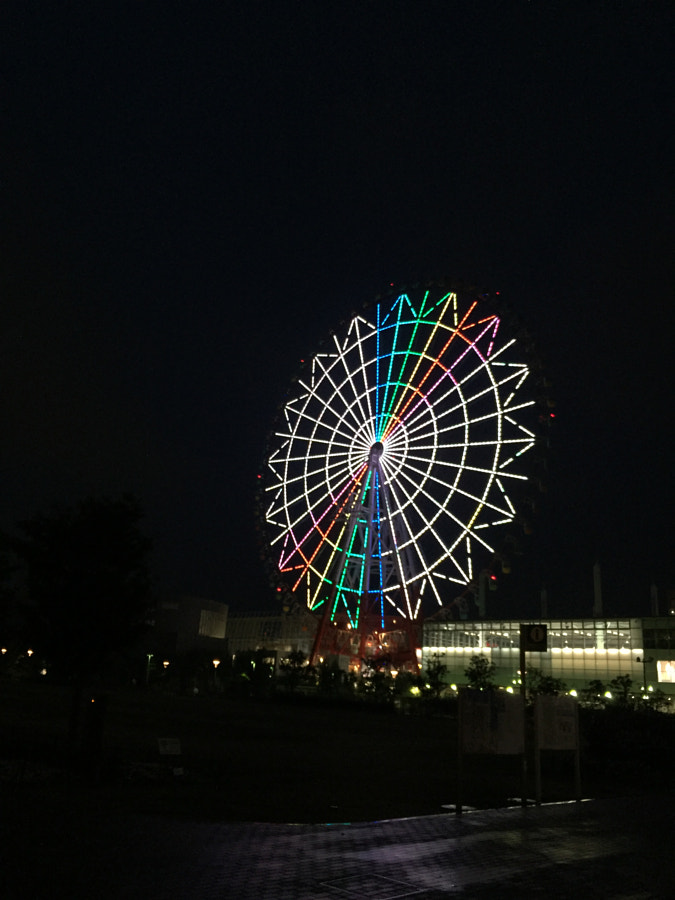 As the evening came, we decided to head back to the station. We got a beautiful view of the Ferris Wheel all lit up which you can actually ride on. And be sure to take the skytrain back at night because you will be able to see the beautiful Rainbow Bridge lit up. I forgot to get pictures, but I really thought it was beautiful!

Note: I won’t list all the addresses here for Odaiba since the area is quite small with maps all around. It’s very easy to get around!

To read about my experience in Odaiba back in 2014, click here.