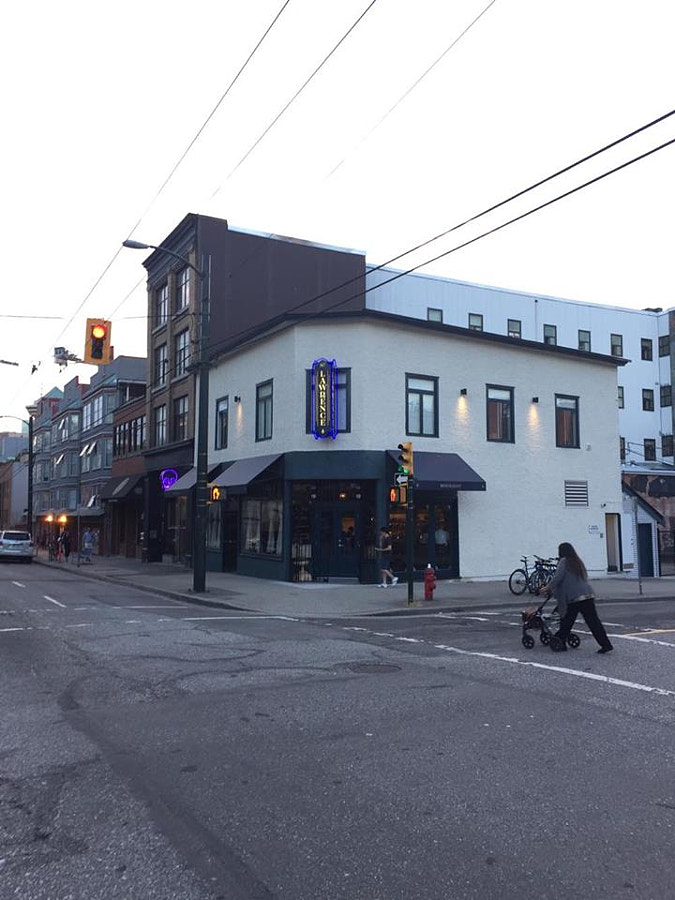 St Lawrence, a sister restaurant of Ask for Luigi, opened up earlier this year. The restaurant is located next to Cuchillo, the Mexican restaurant, in not the best area in town, but once you step inside, you will forget about the exterior. S brought me here for my birthday and she had called to make reservations before the restaurant even opened to only score a 9pm reservation. Yes, this place is in high demand! We decided to go half an hour early to see if we could get a seat, and luckily were told that there was a chefs table seat! 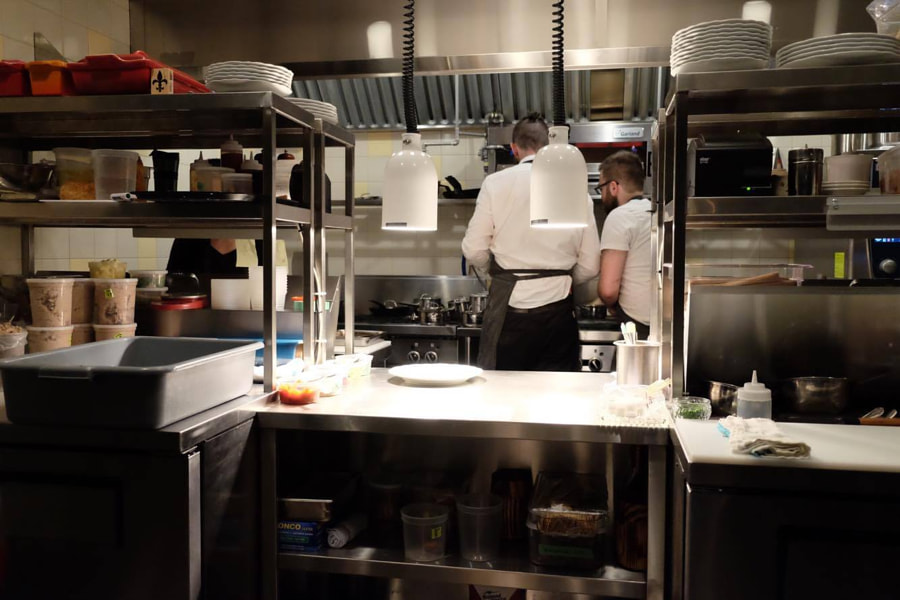 If you are into cooking or are a major foodie, I highly recommend asking if the chef’s table is available. We got to watch the chefs in action and the whole plating process. The menu offers classic French cuisine with Quebecois inspiration. The restaurant also offers some daily specials which change up daily. 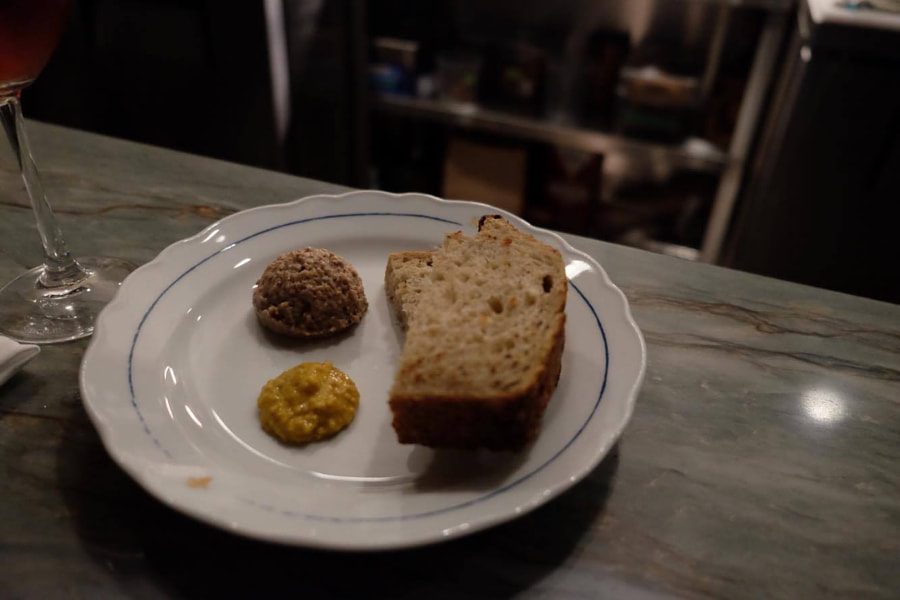 We started off with complimentary bread served with pork pate and grainy mustard. That pate paired with the grainy mustard was seriously so damn good. They need to give us more bread to clean that plate up! 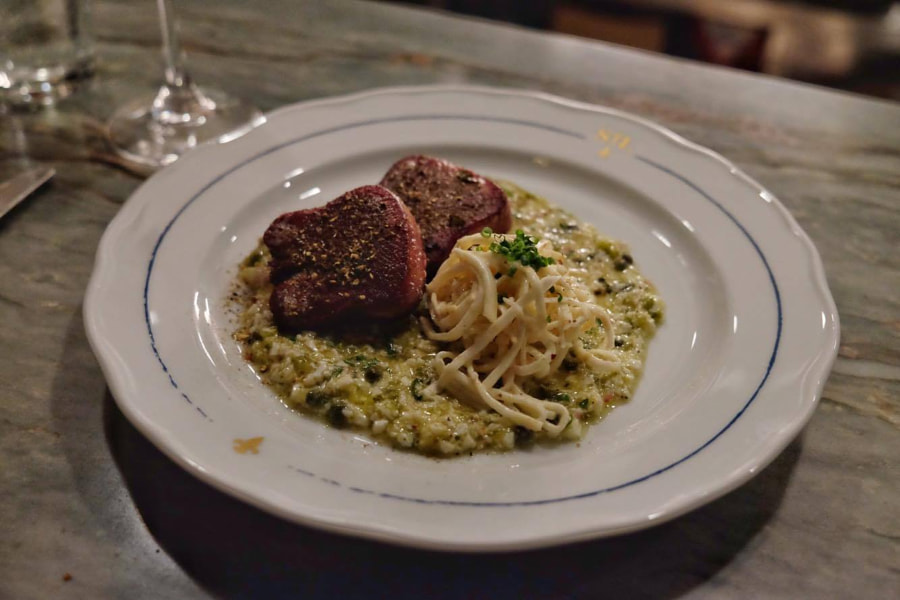 The dishes at St Lawrence are great for sharing, so S and I decided to order a variety of dishes to share. Our server was very knowledgeable and gave us quite a few recommendations. For appetizers, we started with the Smoked Bison Tongue which was seasoned with Montreal spices and served with a ravigote herb sauce. The bison tongue was really tender with a nice sear and paired well with the slightly acidic sauce with capers. 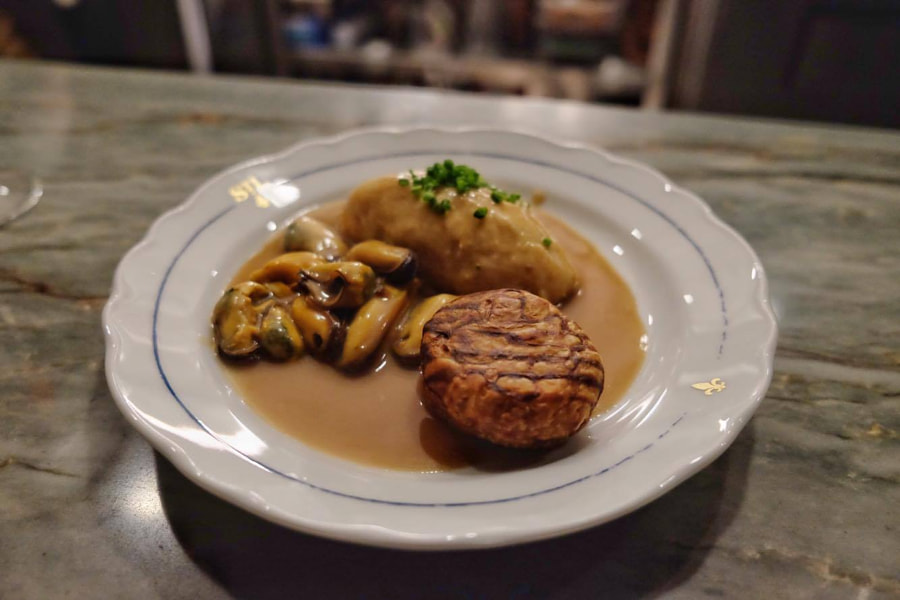 The next appetizer was the Fish Quenelle which was served with mussels and a cream sauce. I had never had a dish like this before but apparently fish quenelles are quite the traditional French dish. It is sort of like a fish dumpling where the fish is very creamy. It was served with some puff pastry.  The appetizers here are seriously great for sharing between two so you get a good amount to taste. I think it is quite a lot and too heavy for one to finish the whole appetizer. 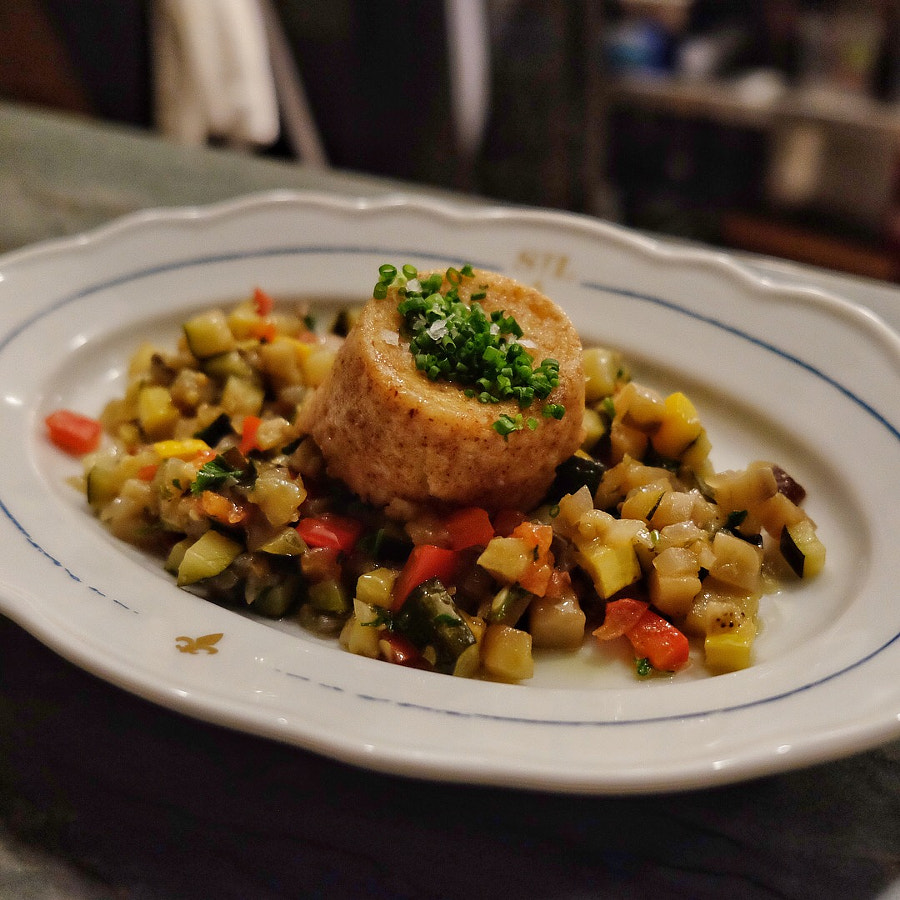 Moving on, S suggested we get some veggies, so we chose the Ratatouille. I haven’t had many ratatouille, but this was absolutely delicious! The mixed vegetables were served with a parmesan custard and when you break it apart, the creamy cheesy custard spills over the vegetables. Highly recommend this! 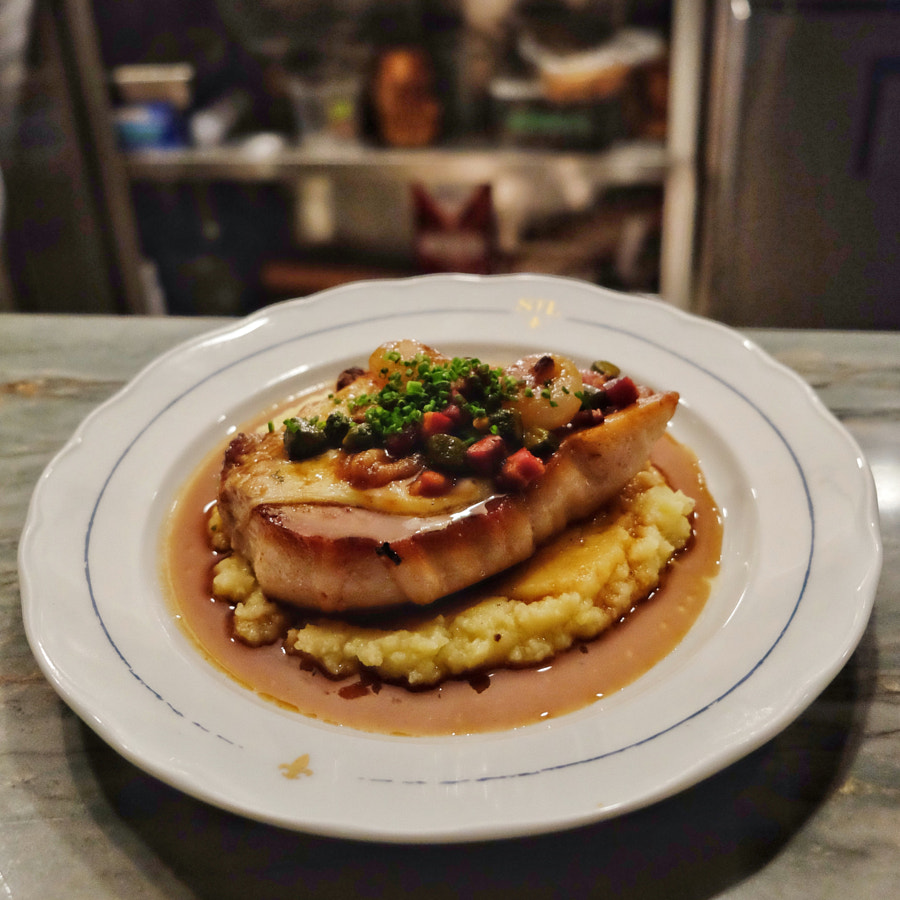 For our entrees, I suggested trying the Pork Chop since I had read good reviews about this. If you are going to order this, then you can probably skip the appetizers because this plate is HUGE. It can definitely feed two if you are going to have some appetizers beforehand. The pork chop is served with Oka cheese and a butcher sauce. The plate is $37 but given how large the portion is, this is a great deal! Normally, I don’t order pork chops because it tends to easily be cooked dry. However, this thick cut of bone in pork chop was seared beautifully with the inside juicy and tender. The pork chop sat on top of mashed potatoes which were buttery smooth. 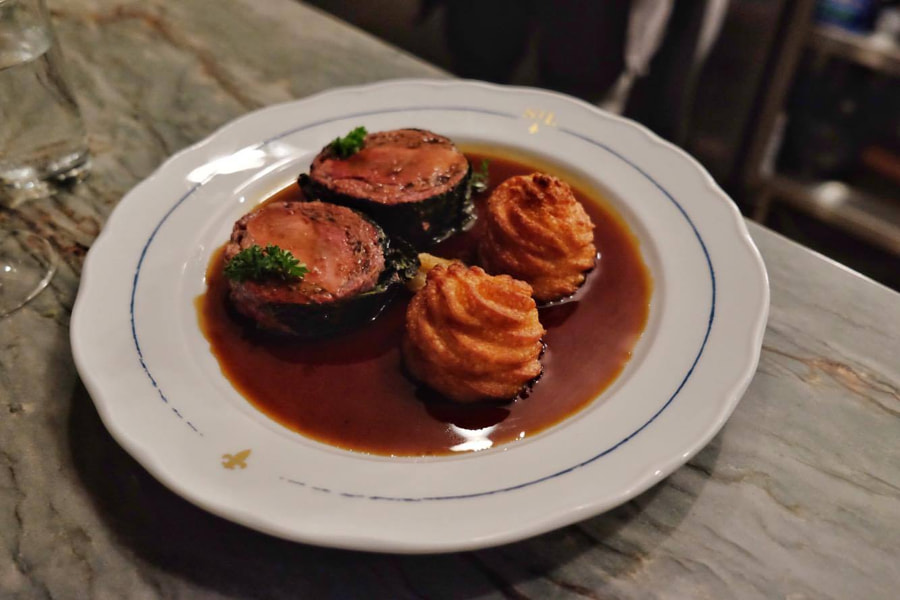 The second entree we chose was the Duck Ballotine. The tender duck was wrapped around these leaves which gave it a very interesting flavour. Definitely my first time trying duck this way. The duck was served with crisp potato puffs and maple sauce. I loved the potato puffs! So crispy on the outside while the inside was smooth and creamy. I don’t see this dish on the current menu anymore though. 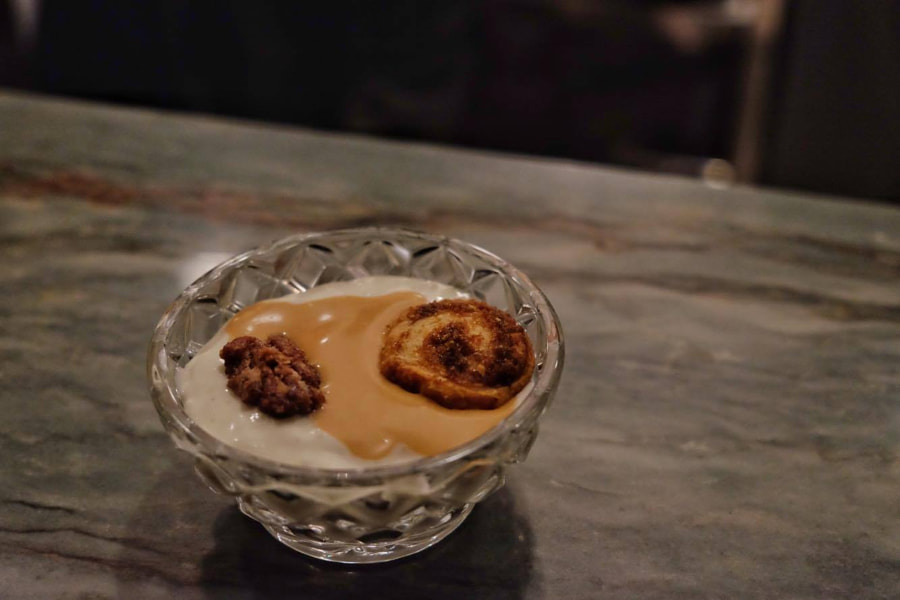 To be honest, we were both beyond full becuase we definitely over-ordered. Even the chef was impressed by us and said we did a good job! He ended up treating us both to dessert which was Rice Pudding with salted caramel. At first, I wasn’t too excited because I’m not a fan of rice pudding. Clearly, I have been having terrible rice pudding though, because this was next level! The rice pudding had the perfect creamy texture with rice not clumping together at all. The salted caramel brought a slightly sweet flavour without it being too sweet. Now I know what good rice pudding tastes like!

Overall, I was very impressed with St Lawrence and can see why it is so hard to get a reservation. The meal was not cheap, but the portions are actually quite reasonable (especially the entrees). We ended up leaving with half of each entree packed up and it made a whole meal the next day for me! Definitely a great spot to celebrate a special occasion!

Cons:
– Not in the nicest place in town
– Can be quite the pricey meal