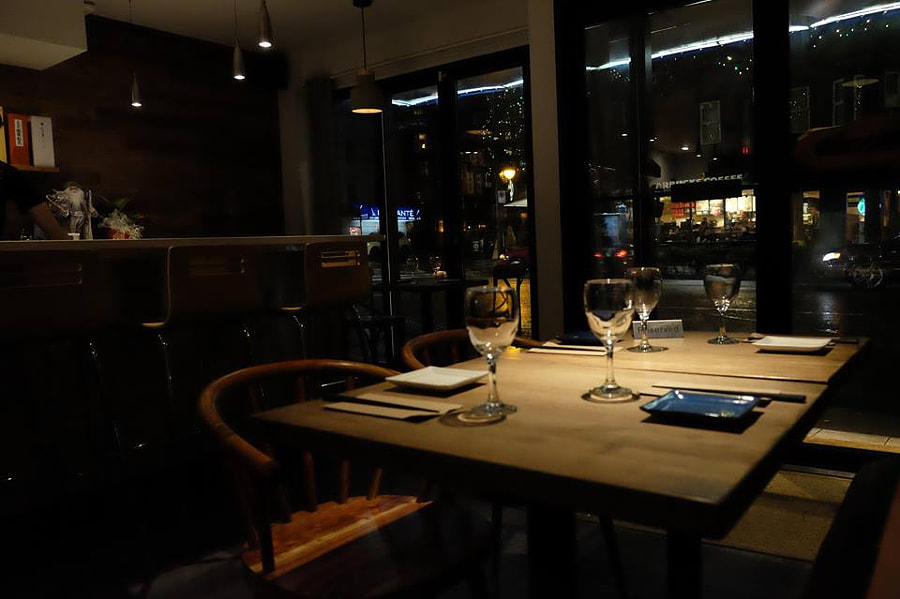 Seeing on the Instagram pictures recently, I decided to take S to Kitchen by Yugo for her birthday. The restaurant features Japanese French fusion and is located on Denman Street near Robson. When we arrived on a Sunday night, the restaurant was completely empty but with tons of staff and cooks. We found it a little odd, but the restaurant slowly filled up. Still, there were quite a lot of employees compared to the size of the restaurant which we found quite odd. At least our service was super attentive because of this! The interior is dimly lit and is quite nice for date night or a girls’ night out. 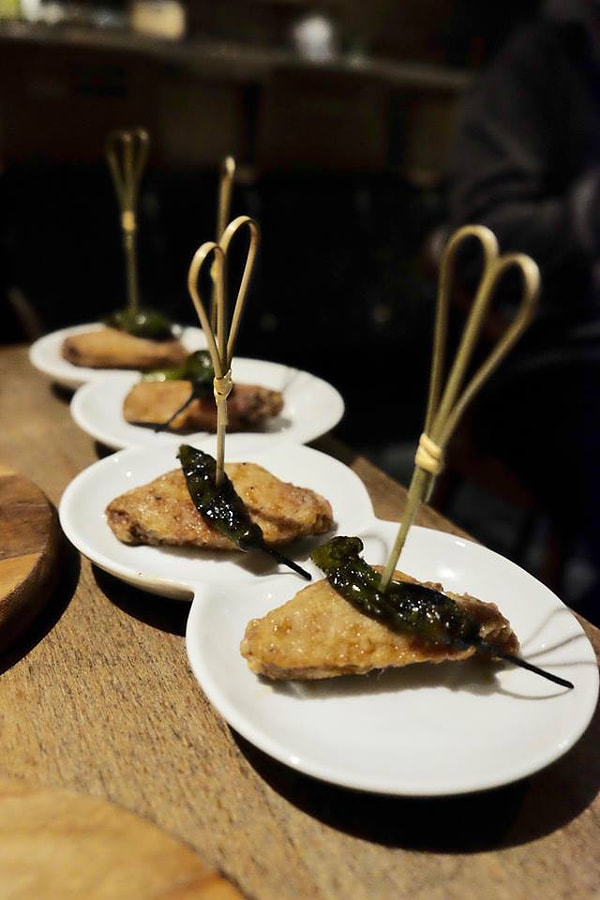 To start, we had the Chicken Wings which feature a soy mirin glaze topped with a grilled shishito pepper. The skin was crispy with the sauce being on the sweeter side. I really liked the attentiveness to plating because the toothpick which they poked in acted as a fork to eat the wing. This made it really easy to eat without having to use your hands! 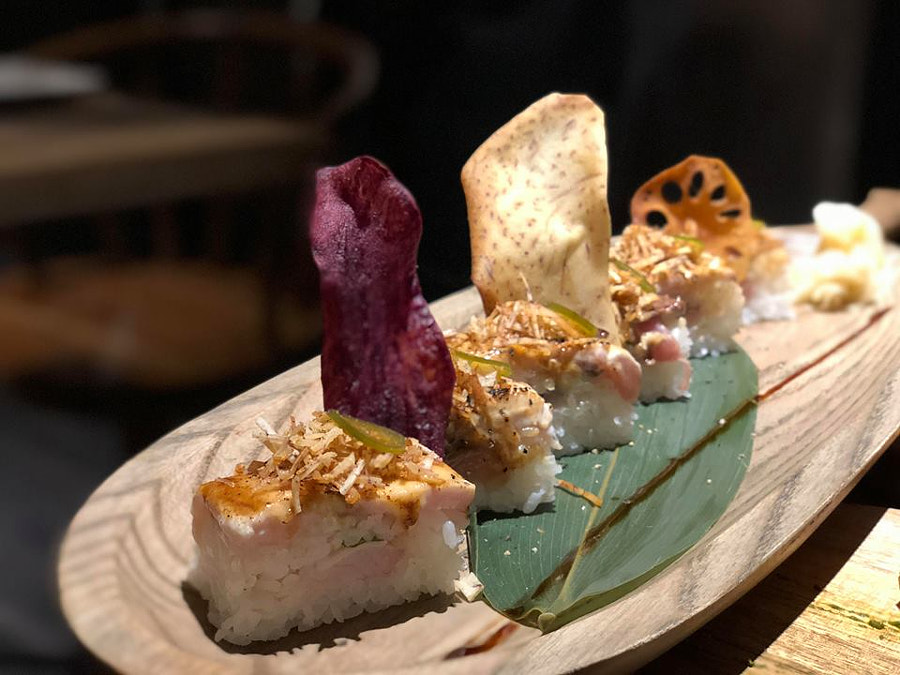 Next, we had the Aburi Hamachi Oshi Sushi. The plate was again visually appealing with crispy taro chips on the side. I found this was slightly on the dryer side as aburi sushi is often more creamy. This wasn’t very memorable compared to the other dishes. 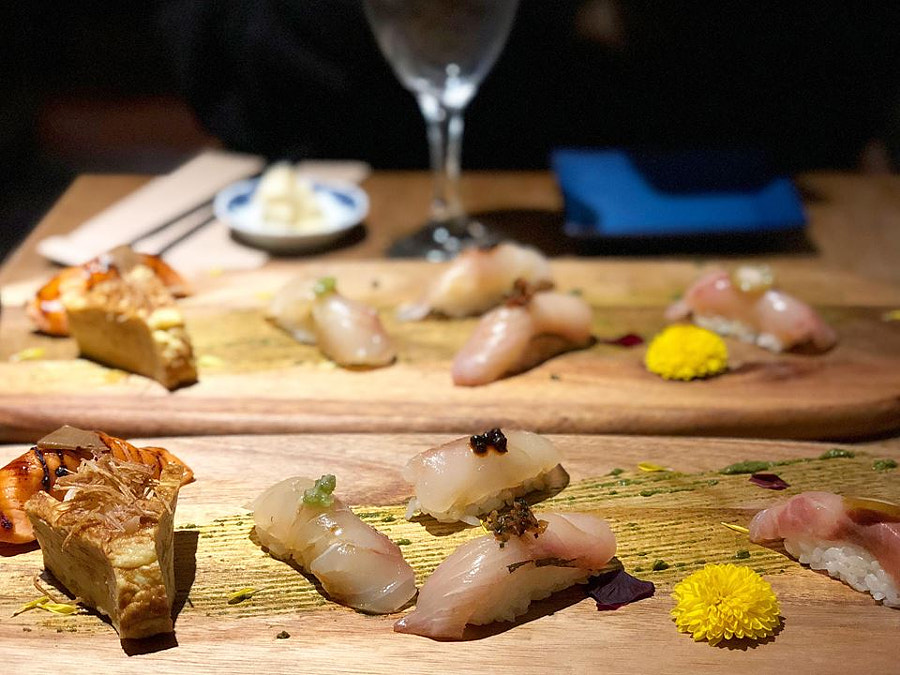 We each then got a set of the 6 piece Omakase Nigiri. Wow! This was beautiful and each piece was carefully curated. To be honest, I don’t remember each type of fish, but they were mostly white fish. What was special was that each nigiri had a different topping or sauce to accompany the fish. This twist is not traditional at all, but each topping really worked well and we both agreed it tasted great despite being fusion style. None of the nigiris need soy sauce since they already have their own topping. 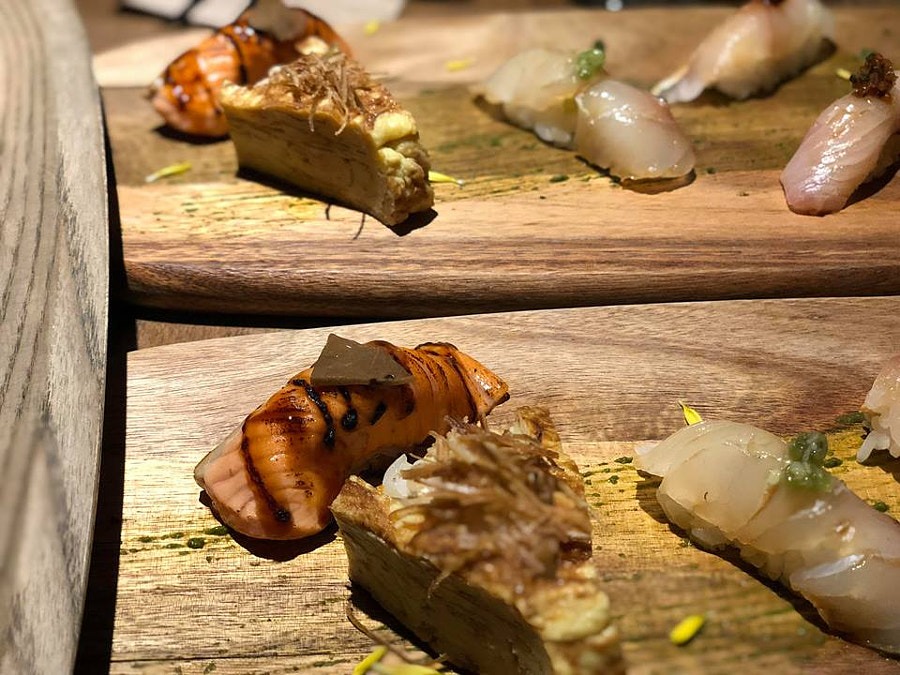 My favourite of the six had to be the Aburi King Salmon with black truffle. This piece is normally $17 for 3 pieces if you order separately, so the omakase set for $30 is a pretty good deal. The salmon just melted in my mouth and the black truffle worked so well with it! The egg was also super interesting as it was stuffed with  grated radish and you could really see each layer of egg! 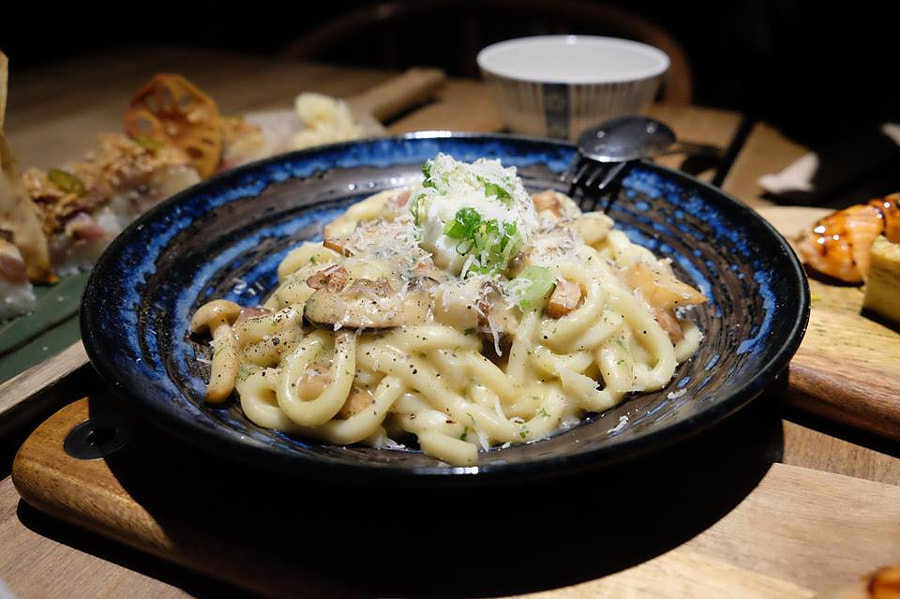 Kitchen by Yugo also feature a small selection of entrees which raelly showcase the French side of things. We decided to try the Carbonara Udon which features bacon, mushroom, parmesan cheese, and poached egg on top. As for noodles, the Japanese twist is featured using udon! Who knew a carbonara sauce would work well with udon? This creamy goodness was delicious and flavourful and the egg was poached perfectly so the yolk ran out. Our only complaint was that the udon was slightly on the softer side as I personally prefer it to be more chewy. This is a good dish to fill up if you’re hungry. 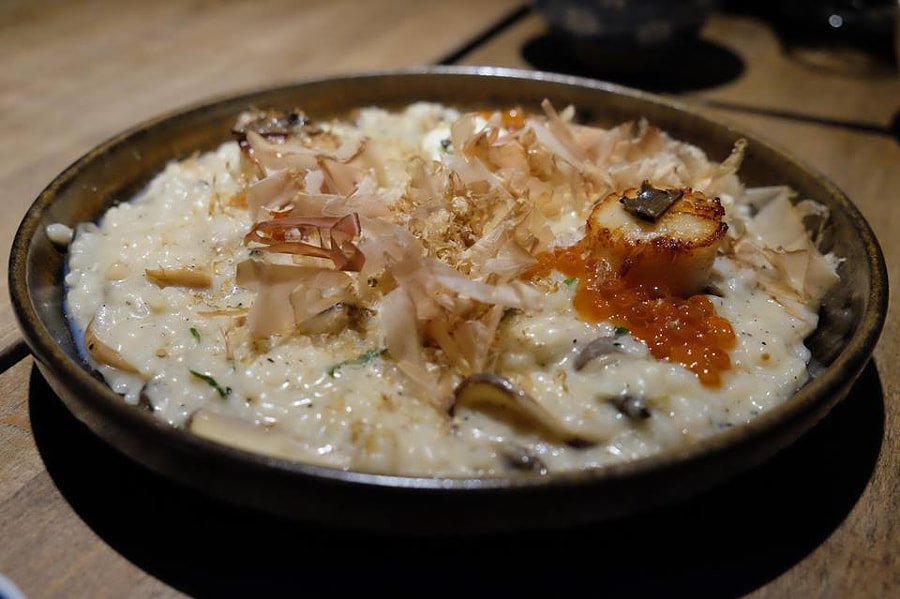 Last but not least, we finished with another one of their French influenced dishes, the Scallops Risotto. This dish featured Hokkaido scallops, black truffle, mushrooms, ikura, honey ricotta, bonito flakes, and fried leeks. Ikura and bonito flakes with risotto? Yes, this worked! The saltiness from the fish roe with the creamy risotto was absolutely delicious! Our only mistake was ordering two creamy dishes, so we were beyond full! Really enjoyed this and it was priced well given the ingredients. 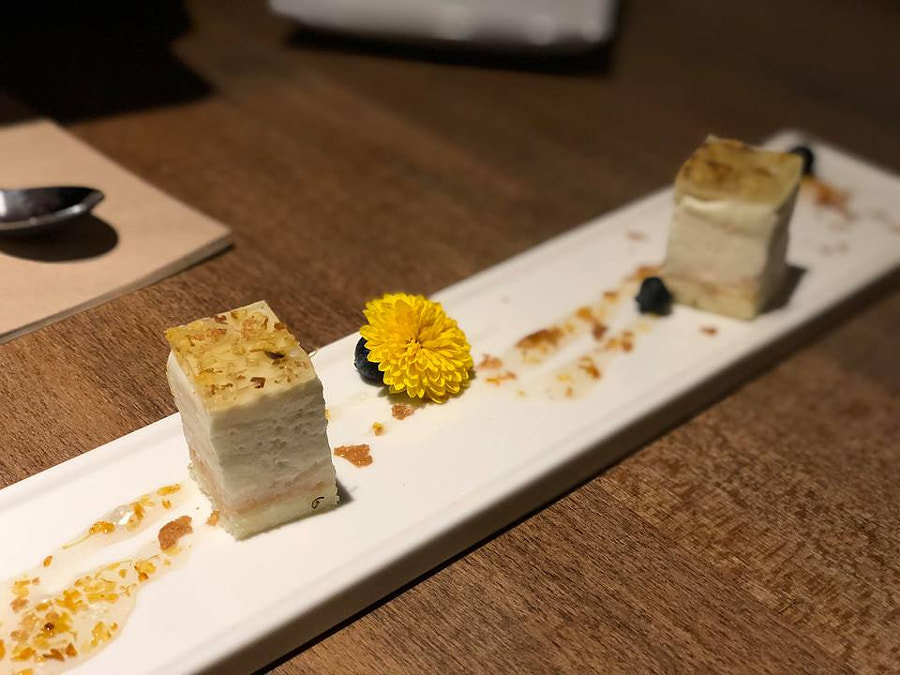 I actually really wanted to try their desserts but we had ordered way too much food. To our surprise, the restaurant gave us a small piece of Lychee Osmanthus on the house so we had no excuse to skip dessert! This featured lychee mousse, osmanthus jelly, sponge cake, and pannac cotta. The dessert was light and refreshing and a perfect way to end the rather heavy meal near the end.

Overall, we were quite pleased with the food at Kitchen by Yugo. I would suggest coming with around 4 people so that you can really try a variety of dishes. Really interesting dishes which I haven’t really seen elsewhere but definitely do not expect to find any traditional Japanese dishes.