Ewha Womans University is a private women’s university in Seoul and is the world’s second largest women’s university. It’s filled with beautiful green gardens and is actually a famous tourist spot. Around the area, it’s known for great shopping for young women fashion with cheap prices. So on day 2, we did some shopping and decided to look for food around the area. Somehow, we managed to go onto this street that reminded me of Chinatown in Vancouver. It was a street filled with elderly and shops selling produce. We were probably in the wrong neighbourhood, but we settled for food anyways. 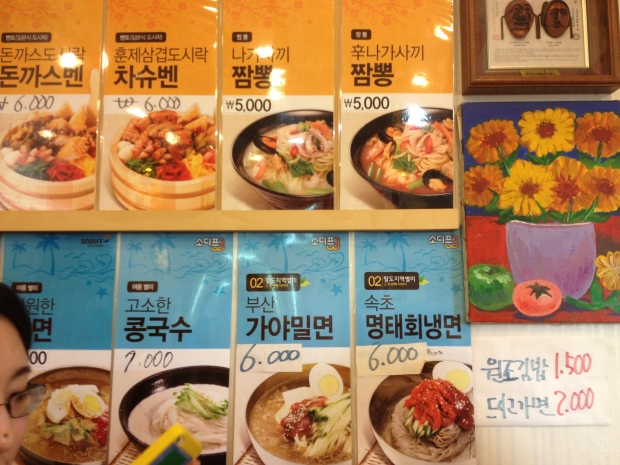 There were various elderly people sitting in this little shop. It’s run by a Korean man and his wife only. There was no English name, but I thought it would be worth blogging, since they offer some popular and typical Korean dishes. The menu is posted on the walls with colourful pictures and prices. No english at all though, so just look at the pictures and guess what it is. Prices are very affordable too!

It seems that it’s very common for you to serve yourself with appetizers in Korea. There are little stainless steel containers filled with kimchi and other pickled vegetables. You can just go grab some, as well as pour yourself some soup and tea. I think the owner saw that we clearly did not know what we were doing, so he ended up serving us. Super friendly service even though he could not speak a lick of English. Just point and smile, and you can get your way around!

For myself, I chose the Naengmyeon. I’ve had this in Vancouver as well, but I wanted to try it in Seoul. To my surprise, I would say the ones in Coquitlam around North Road are quite up to par. When directly translated, Naengmyeon means “cold noodles.” It’s sort of like the Korean equivalent of soba noodles. The noodles are long and thin and are often made from buckwheat. They are very chewy compared to the Japanese soba noodles. Served in a stainless steel bowl, it has a broth that is slightly tangy, some cucumbers, radish, and a boiled egg. It’s also topped with a spicy red sauce. What’s cool about the dish is that it also comes with a bunch of shaved ice so it really keeps the noodles cold. You can then add a spicy mustard sauce, which reminds me of wasabi to bring more flavour and spice to it.

Some of the girls got the Spicy Octopus on Rice, which I tried some. They are baby octopus, and the spicy sauce used is a little sweet. Super tender and the flavour was definitely very appetizing. Mix it with the rice and seaweed, and you have yourself a delicious meal. 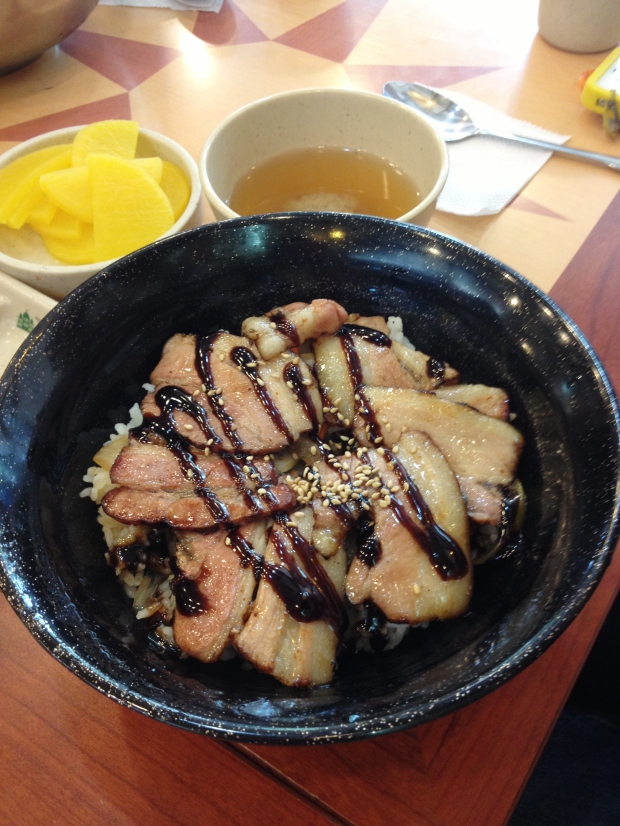 I believe this was the Grilled Pork Belly on Rice that my friend got. Not exactly sure though. Or it was something along the lines of grilled pork. Cut into thin slices and topped with sauce and sesame seeds. She said the meat was very tender and delicious!

Overall, we were all very satisfied with our meal here. Just wish there was an English name, so I could search up the location again to share with everyone. Oh and it’s interesting to note that at most of these restaurants, people just eat and go. They don’t sit around chatting for too long, so the turnover rates are really high.

Another late night at UBC means looking for food for dinner! A friend ended up grabbing me some take out at Curry Point which is in University Village.
Can’t comment much about the place since I wasn’t there but the food was just okay. The curry was much better than the one from the Delly, but the rice was kind of soggy. Still need to find a better curry place at UBC!

If you go to school at UBC, you know how it sucks to stay late at night just to do a presentation. Not only that, but finding food after 5pm is a headache with almost everything closed! Well I guess there are options, but they’re just really far and walking in the cold weather is not exactly something you would want to do! So I end up at the SUB (Student Union Building) with most stores already closed. Sushi is basically sold out, and not really feeling like Subway, so I end up at the Delly. I’ve tried their pastries like samosas and other phyllo pastries and they were really delicious! Always my go to place for a small snack. They also have a section with butter chicken and a variety of curry, so I decided to get a filling dinner and chose the Curry Chicken with Rice. To my disappointment, it tasted terrible! I usually can’t take spice, but I can guarantee you that this curry has no spice to it at all, and the flavour is bland and not even close to the typical curry flavour. The pieces of chicken were huge and all had bones in it. It was literally a whole chicken but chopped up. Not exactly something I want to eat when I’m out. Only good part were the potatoes. It was however a huge portion for the price, but I still wouldn’t go back for it. Perhaps the butter chicken might be better. And for sure, those pastries are delicious, so go for those instead!

Curry with Pork Cutlet on Rice

I’ve always wanted to try those restaurants down Robson Street – the ones past all the shops. Their store front or ads on their windows always attract me but I’m never in the mood to eat at that time! Finally a day where I was craving some food and of course I walk past Donburiya. This chicken karage picture on their ad outside totally attracted me, and it’s actually not the first time. I remember seeing it a long time ago and wanting to try it. And aren’t I happy that ad pulled me in! The chicken karage comes in a bowl of 4 for $3.50 and are boneless. The batter isn’t very thick so it wasn’t very oily. Also decided to try the takoyaki which I have to say is one of the best I have had. And lastly, the curry with pork cutlet on rice was a great deal as it was a huge plate for only $9.25, compared to places such as Aoyama which charges around $13 for a small plate that isn’t as good as this one! The place is however very small and can probably only sit 20 people and it is more like a self serve restaurant. You pick up your own utensils, seasonings, and water. They do however bring you your food in a tray. So perhaps take out is the way to go. They are famous for their rice bowls which I saw many people eat and it looked delicious. It seemed like a lot of Japanese people were eating here too so it must be good Japanese food! Definitely going back here again!

My friend brought me to 4 Stones Vegetarian Restaurant and I was really amazed at the dishes they were able to make! I’ve had vegetarian food before, but haven’t tried this place yet, and people had given 4 Stones great ratings. They have a large variety of choices and the fact that they could make chicken cutlet vegetarian was pretty cool. All their rice dishes were also made of brown rice, which made it really healthy. So if you want to try some healthy vegetarian food, or if you’re vegetarian and wanting some variety, this is the place to go!

Han Ju Tofu Hot Pot is one of my favourite korean places to go! I don’t especially think of it as a Korean place though, since they only offer a few types of Tofu Hot Pots, and the rice. So, basically people come here to eat these few dishes. They do offer a few snacks and bubble tea drinks, which I find a little bizarre. I love their seafood hot pot though! It’s got these clear noodles inside the hot pot along with rice, so it’s really filling. You can also choose how spicy you want it. This one is mild. I have yet to try their Korean Style BBQ with Rice though! My friends always get it and say it’s their must have here! Their prices ranger from $5.95 to $6.95, so quite reasonable for a good portion. Don’t expect any fancy furniture or service though, as even their serving board is just similar to a fast food plastic one. Also gets quite busy during dinner time, so get there early!