On our last day in Portland, of course I had to do a trip to Trader Joe’s to do a haul. After my purchase, I suggested we visit the Alphabet district to look for some food. My initial thought was to check out Boxer Ramen, but after taking a look at their menu, we thought it was on the pricier side compared to what we could get in Vancouver. Next door was The Waiting Room, and after taking a look at the menu, we decided to have brunch here. The restaurant is inside a Victorian house and it has a super cool patio. Honestly, it feels like you’re eating at someone’s house! 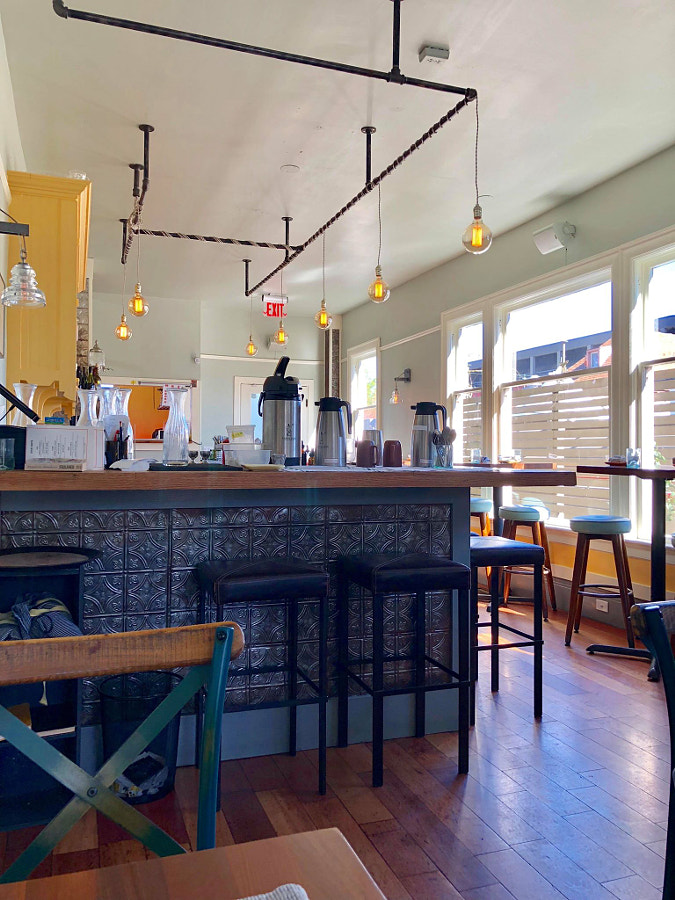 Even the interior is warm and cozy like someone’s dining room! Super cute spot. 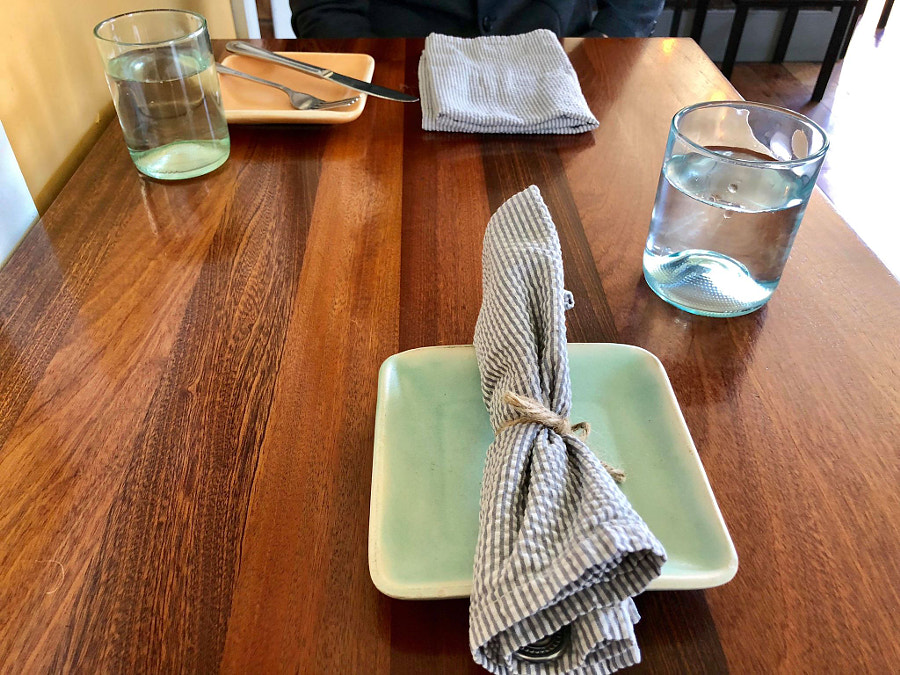 I also love the plates and serviettes! So aesthetically pleasing! 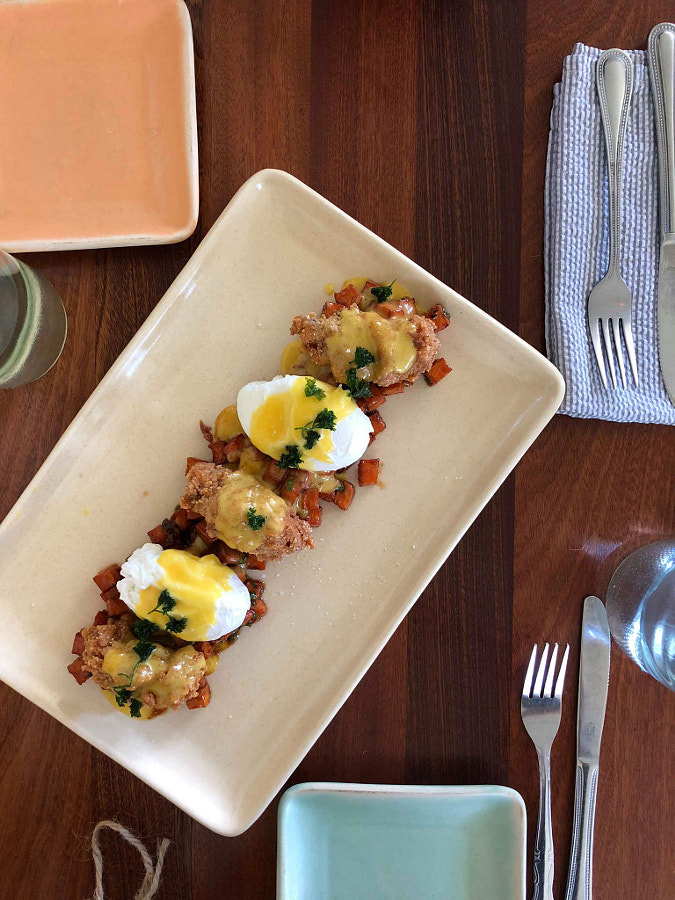 Fried Oyster Hash
On Sundays only, they have a brunch menu, so I decided to try the Fried Oyster Hash. Medium sized fried oysters and poached eggs sat on top of sweet potato brabants and topped with worcestershire hollandaise. Oysters tasting fresh and the batter was thin. The yam brought a nice sweetness to the salty seafood. Dish looked small at first, but I was super full at the end! 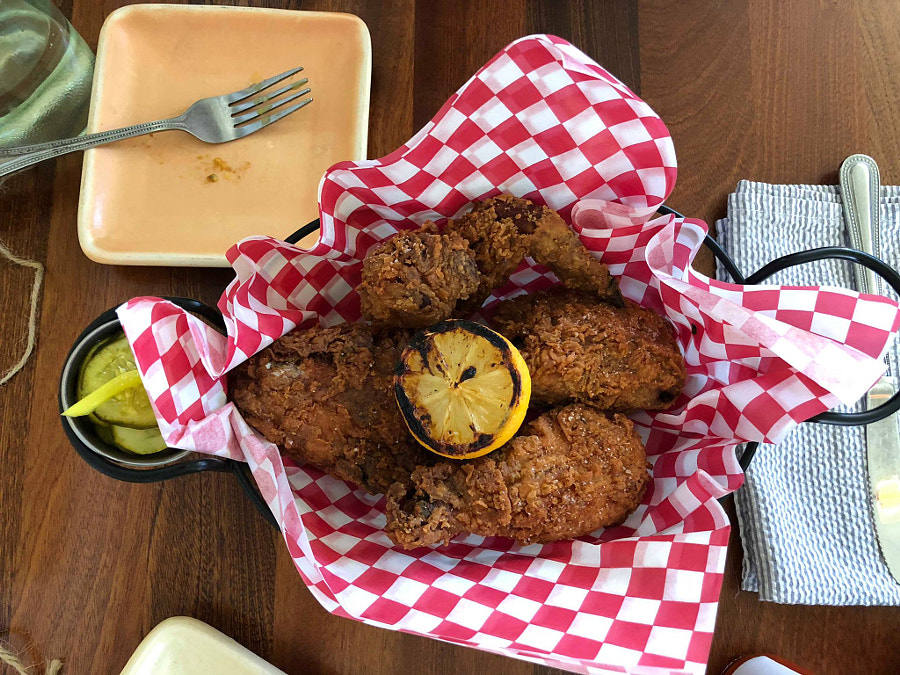 Fried Chicken (half order)
Of course S was drawn to the Fried Chicken. Turns out, the restaurant is famous for their Loiuisana fried chicken and Northwest oysters, so I guess we hit up what they’re good at. This was half an order which is made fresh so you should allow around 30 minutes for this to be prepared. The half order was actually a lot of food and enough for two people if you order some smaller dishes. The batter was super crunchy and flavourful while the chicken was juicy and not overly greasy. S eats a lot of fried chicken and he definitely enjoyed this one! The chicken is served with a grilled lemon and they provide you their home made hot sauce which is perfect if you want a kick. It also comes with a side of pickles which paired so nicely with the fried food. Must try dish! 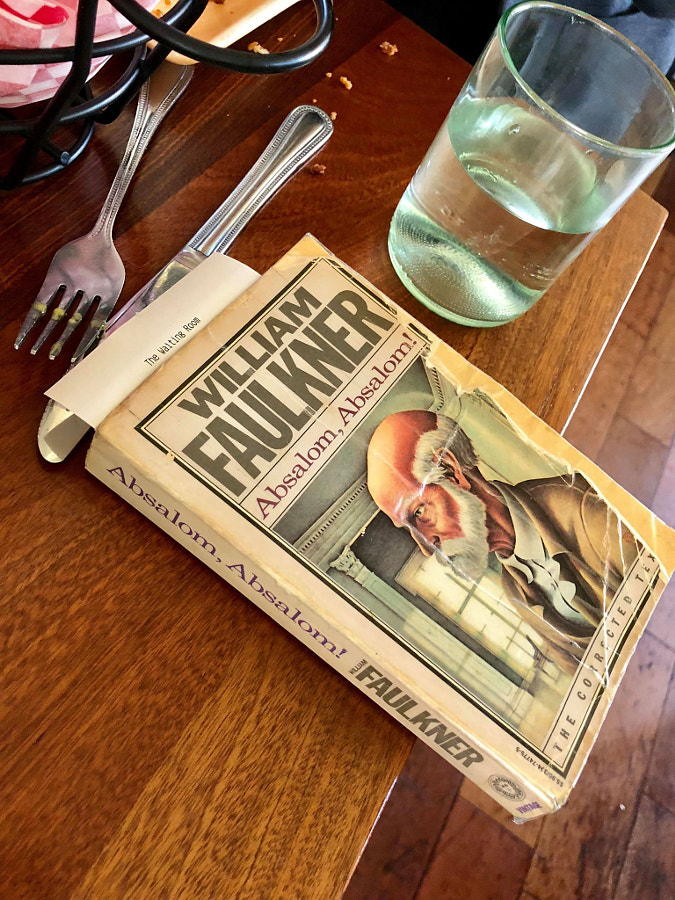 When we asked for our bill, it came in a book which I thought was really cool! I love these subtle touches at restaurants! The restaurant was surprisingly not too busy during brunch on Sunday, but that also means no need to wait in line like many other spots! Plus, the neighborhood is really interesting with all the historic buildings and definitely a spot to hit up!

Cons:
– Brunch is only available on Sundays 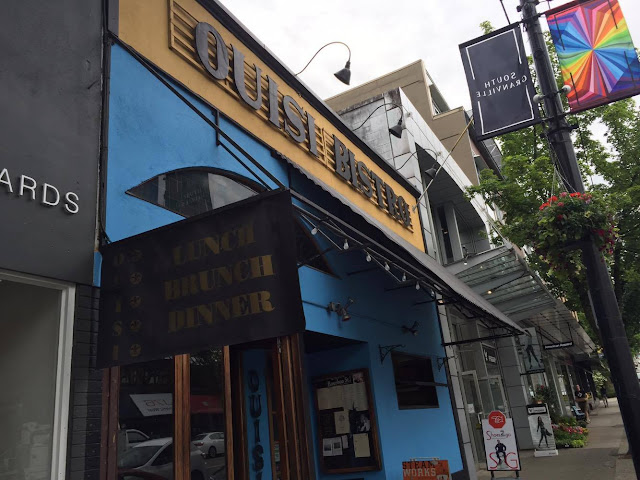 For our squad lunch, we decided to head down Granville and try a new restaurant. We ended up checking out Ouisi Bistro, which is one of the few Louisiana and Creole style restaurants in Vancouver. 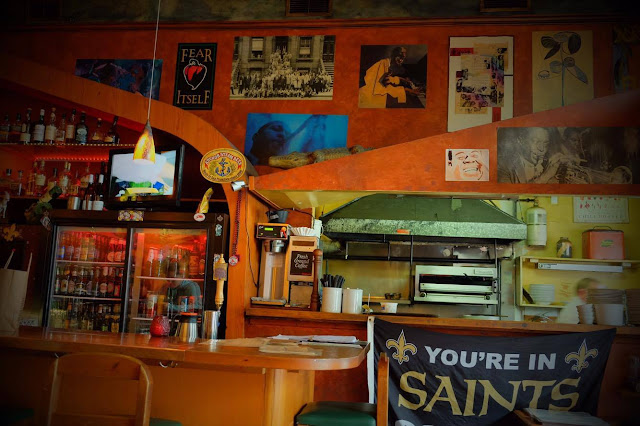 The interior is dim with colourful walls and I think they have jazz nights sometimes. Seems like a cool place to grab a drink in the evening. 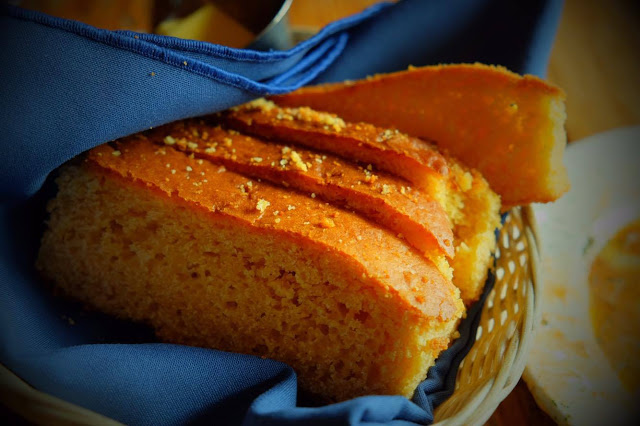 We started off with Corn Bread which was soft and fluffy. 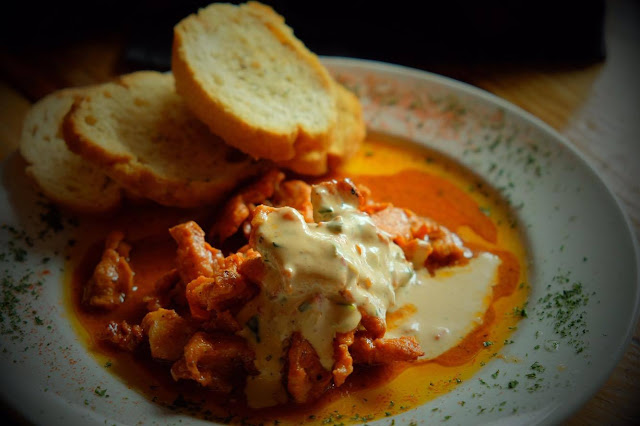 We shared a dish of the Gator Bites which according to their menu is genuine Louisiana alligator. It’s served with a spicy and hot Cajun tartar sauce and a side of croutons. The gator was more tough and chewy as expected but honestly, it can be easily thought of overcooked chicken. I really enjoyed the sauce though and I used the cornbread to soak it up. 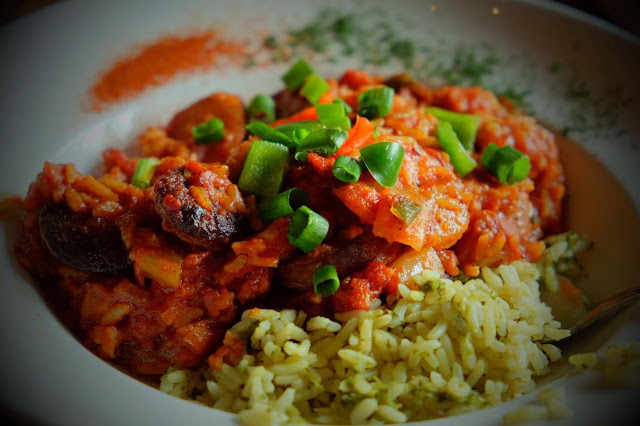 For myself, I got the Jambalya which was simmered with tomatoes, smoked ham, andouille and chorizo sausage and sautéed Gulf prawns. I haven’t had many jambalayas before, but the most recent one I’ve had was at Cactus and this is definitely way better. It tastes a lot more authentic for sure! I loved the smoky flavour and spices used but I found it to be too saucy based on the amount of rice given. Therefore, the dish ended up quite salty in my opinion. 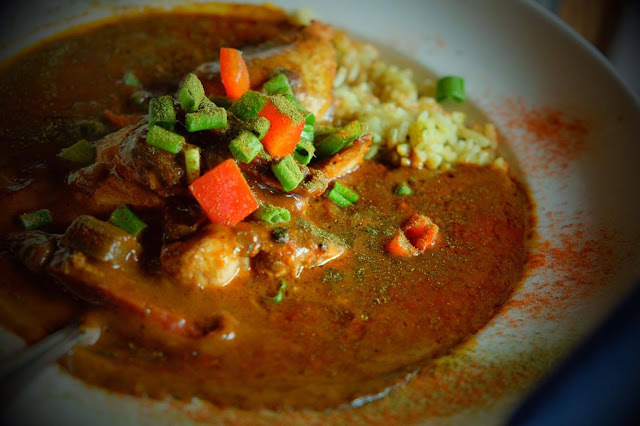 The rest of my table got the Ale Marinated Chicken and Hot Smoked Duck Sausage Gumbo, another traditional Creole dish. It came in a tradiational dark roux and again they said there was too little rice to go with the thick sauce and therefore salty. They need to work on their ratio of rice to sauce otherwise the dish can be too salty.

Overall, Ouisi is a great spot and one of the few places in Vancouver you can try Creole and Cajun food. I don’t think I can have these dishes too often though as they are very heavy. Service was okay and prices were decent for the portions.

Pros:
– Lots of ingredients in the gumbo and jambalaya
– Reasonable prices for portions

Cons:
– Can be quite heavy and salty
– Too much sauce for the amount of rice

I’ve been on an oyster craze lately, so when SP and SK asked where to eat, I suggested Chewies at Coal Harbour. We decided to get there right after work so we could get our orders in for happy hour. There’s some construction going around here right now so it’s a bit hidden, but they do have some signs directing you.

The restaurant wasn’t too busy on a random Thursday night. The patio outside did fill up, but the indoor seating was still quite free. I hear they are quite packed on Fridays and weekends though. The Coal Harbour location has happy hour from 3-6pm daily, and the people were quite nice about it even though we arrived at 5:45. They made sure we got our orders in right before 6pm.

Several of their BC craft beers and boutique wines were featured on their happy hour menu for $5, which is a pretty good deal. Their pints of beer are all 20oz, so it’s actually quite a bit! I chose the Whistler Paradise Valley Grapefruit Ale, which I loved! You got that hint of citrusy flavour and I liked how it wasn’t very bitter.

SP got the Parrallel 49 Gypsy Tears Ruby Red Ale, which is more of a bitter ale. You could definitely taste the contrast from the grapefruit ale, but it’s definitely a lighter beer compared to some of the really strong bitter ones I’ve had.

We were obviously here for their buck a shuck oysters, so they first started us off with the sauces that go along with the oysters. They have four: a cucumber vinegar, your classic mignonette, cocktail sauce, and a spicy habanero. They also bring you some Tabasco sauce. Our favourite was probably the spicy habanero, but it really wasn’t even that spicy.

We got a dozen of their $1 BC Beach Oysters, which were extremely fresh. They switch up their oysters depending on what’s in season, and the server explained to us the name and all, but I didn’t catch it.

They also offer $2 oysters during happy hour for their premium oysters. These were quite big, but they were still very sweet! The only issue I had was that one oyster or so had some shell bits in it. Always a sign of how good the shucker is.

Their happy hour menu also features a selection of their ‘first bites’. They actually offer quite a large variety – so many that we ended up ordering almost the whole menu… Since it’s 50% off their regular price…why not? Well, first off, we started off with the Pan Seared Calamari. Like its name says, the calamari is seared rather than fried. These were actually really good though and a good alternative to the oily fried calamari. The squid had a nice char to it and was super tender! It came with a cucumber, mint and jalapeno salad with creme fraiche dressing and remoulade. That salad was a killer though as it was way too spicy!

Next up were the Dungeness Crab Cakes with a lemon aioli and an avocado & cucumber salad in a cilantro-lime vinaigrette. They come with three pieces, so were perfect for us to share. These were pretty good although I wish they were slightly more seasoned. The lemon aioli helped bring more flavour for sure.

And then there were the Fried Fanny Bay Oysters. These were parsley and cornmeal battered Fanny Bay oysters and came along with Chewies’ tartar sauce. I felt like these had more batter on it than the actual oyster. I was expecting more fatty oysters, but they were pretty small and felt rather overcooked. Not a huge fan of these.

The fried fanny bay oysters also come with the Brioche Garlic Toast, which were pretty delicious. Tastes just like your typical garlic bread with a nice crispy texture to it.

Since we’re at Chewies, might as well keep loading up with the oyster dishes… So we got the Oysters Rockefeller, which featured fresh hand shucked BC oysters, absinthe, spinach and herb puree, and topped with Parmesan cheese bread crumbs. An order came with 5 oysters and these were pretty good. The oysters were quite large and fatty and I loved the spinach and herb puree underneath. I still prefer the ones at Joe Fortes a bit more though.

We also got the All Dressed Cajun Fries. At first, I was skeptical to order this, since I’m not a huge fries person and I can only imagine how much they can do with fries. However, this was beyond my expectations! It ended up being very simliar to a poutine, with Andouille sausage, fresh garlic, diced tomatoes, cheese curds, Parmesan and garlic mayo. The fries were crispy and sizzling in the pan. The sausage and seasoning gave it a slight kick, but nothing overwhelming. Definitely a great dish to share.

Lastly, we got the Crocs & Hush Puppies, which we were all curious about. Yes – crocs meant fried crocodile! Well the menu acutally detailed it as “chicken fried crocodile,” so I’m not really sure if we were eating crocodile or not. The meat was definitely much more chewy, but I actually quite liked the texture. Hush puppies refer to these cornbread balls and these were nothing too special. The dish came with a house vinaigrette and some jalapeno jelly which definitely had a level of spice.

Overall, happy hour at Chewies definitely met my expectations. They have a good selection of dishes with 50% off, and most of them were good, if not really good. My favourites had got to be the calamari and fries. Their oysters are also extremely fresh and you can even upgrade to their premium! Ambiance is also really nice with high ceilings and a modern environment. Great patio during the summer as well. Service on the other hand was a bit of a hit and miss. Our last two dishes actually didn’t come for the longest time and we had to remind them to cook it up. The server at the end was pretty nice though and apologized for our wait. Oh and by the way, if you end up like us ordering pretty much the whole menu, your happy hour deal isn’t so happy after all since the bill will add up. But hey, at least we left with a full tummy!

Cons:
– They forgot two of our dishes at the end

Bubba Gump Shrimp Co. is all over the States. This one was at Times Square, New York. Definately friendly and great service. They have signs that say “Go Forrest Go” and “Stop Forrest Stop”, which lets the servers know if you need any help. Funky environment and a great restaurant for the family. Food was also delicious. The seafood was extremely fresh and I would say the Mahi Mahi was one of the best I’ve had. The artichoke dip was also really good. Yum!