I always tell S to skip the chain restaurants, because there are just too many new and more exciting restaurants to try in Vancouver. Not that I don’t like chain restaurants, but you sort of know what you’re going to get. But since I had a $100 gift card to The Keg, I might as well use it, right? I suggested we try the somewhat new location at Alberni in Downtown and was blown away by both the beautiful interior and amazing food. 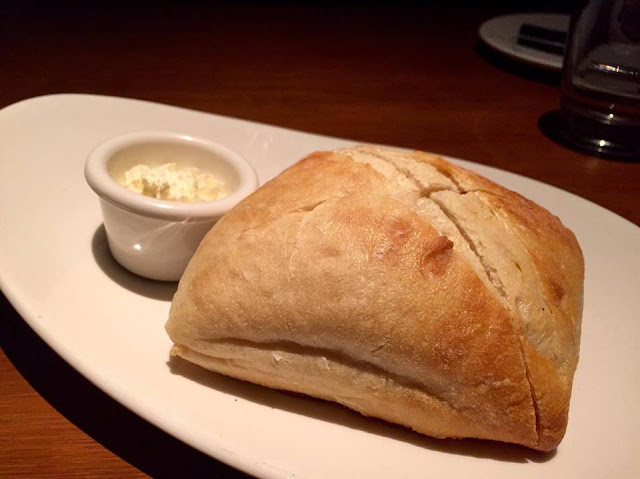 Dinner started off with Complimentary Bread and whipped butter. The bread was served warm and super fluffy. We loved this! 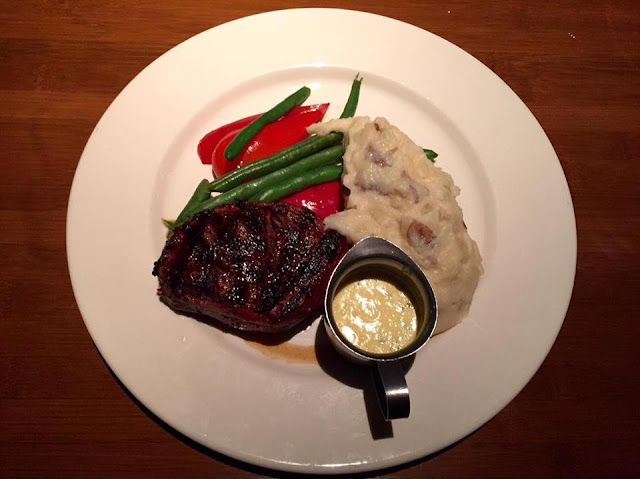 I decided to choose the Filet Mignon with a side of mashed potatoes and vegetables. Served medium rare, the tenderloin was wrapped in applewood smoked bacon and was literally what they describe it on the menu as “ultimate in tenderness”. This was served with Béarnaise but I found the meat itself was already very well flavoured. One of the best cuts you can get and didn’t disappoint! 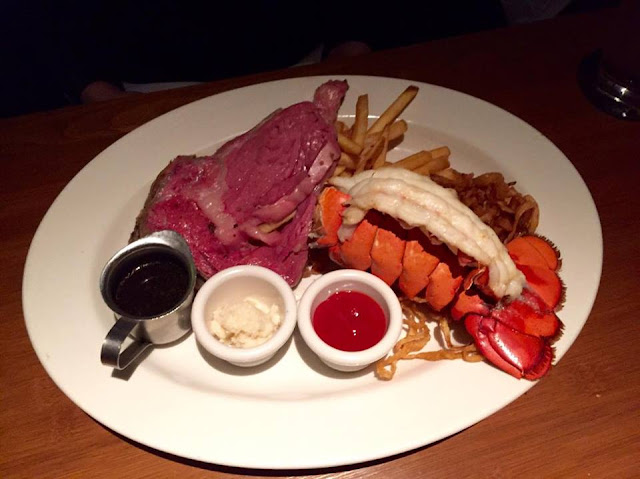 Prime Rib with side of Lobster Tail

S chose the Prime Rib and went all out by adding a side of a 6oz Atlantic Lobster Tail. Best choice ever, because the lobster tail was cooked absolutely perfect! Buttery and tender, this was delicious dipped in the lobster oil. A must order! The prime rib was also very tender although there were some fatty parts which were difficult to chew. The prime rib was rubbed with Keg’s unique blend of spices and hand-carved. It is served with horseradish and red wine herb jus which further enhances the flavours. 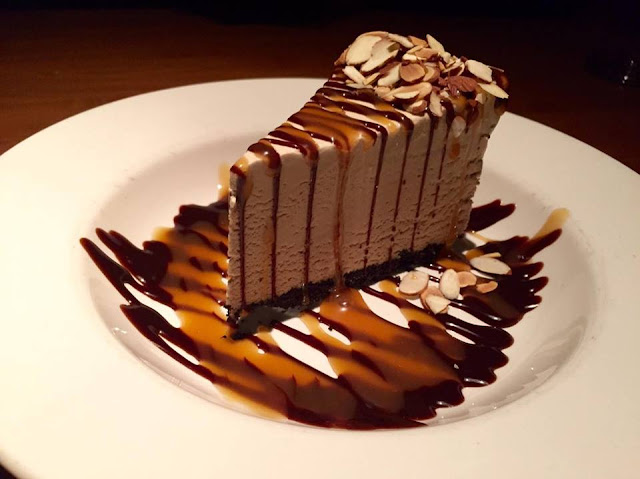 For dessert, I suggested we skip the other choices and stick to Keg’s top dessert, the Billy Miner Pie. Perfect for sharing because one slice is huge but I could probably have it all to myself… Does mocha ice cream on a chocolate crust with hot fudge, caramel and almonds not sound delicious or what? 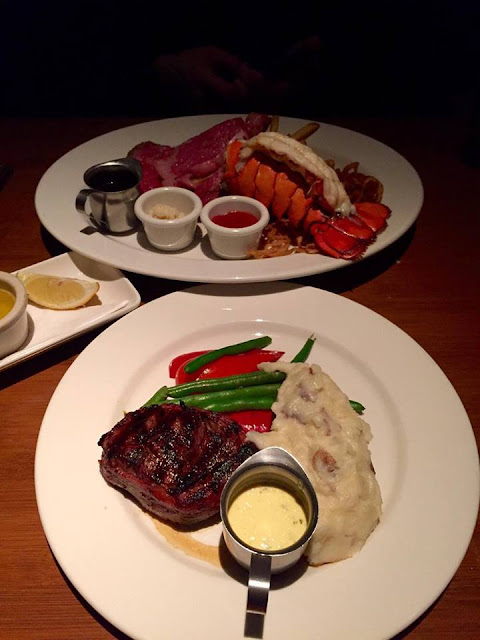 Overall, I have to say I was impressed with The Keg and would happily come back here for a great steak. I guess they have been doing this for so many years, that they clearly know how to cook steak. Plus, you know the service is going to be great here.

Pros:
– They know how to cook steak perfectly
– Portions are great

Cons:
– Dishes are more traditional, you won’t see much fancy stuff going on
– Some of their cuts can get pretty pricey (this location appears more expensive as well)

Le Fin de Siecle was rated as one of the top Belgian restaurants for locals, so C and I decided to go here for our last dinner. It’s tucked away in the streets and the restaurant’s name is barely noticeable in the dark. It took us a while to find it and we even walked by it a few times before we saw the small font at the bottom of the window. The inside was quite packed, but it was still early and we were able to find a seat. It’s a very chill restaurant, almost like a pub. Wooden furniture and very cozy. Their menu is written on the chalkboard everyday, and it was all in French. Yea, my high school level French clearly did not help, and we had to ask one of the workers, who seemed like the owner to help us out. He was very busy, but still came back a few minutes later and went down the whole list to explain to us. Very friendly!

I wasn’t expecting complimentary bread here since it looked more like a pub, but they still offered it. However, the bread wasn’t that good. It wasn’t warmed up and not fluffy.

I chose the Grilled Steak, since the other options didn’t seem to appealing to me at the time. I hadn’t had steak in a long time, and this was a good meaty meal. The steak was cooked to medium rare with the inside still pink. Perfect! Topped with a slice of butter and some light seasoning, it was juicy and tender. It came with a side of salad and the leaves were all fresh and crisp. It also came with a baked potato, but I wished it was seasoned a little more. Some good comfort food though!

C chose the Beef Carbonade with Mashed Potatoes, which is also a favourite at Le Find de Siecle. A carbonade is a typical Belgian dish, which is essentially a beef stew made with beer. I believe they said these were beef cheeks. The meat was so soft and tender! And the sauce was delicious! Very hearty and was perfect to mix with the mashed potatoes. It also came with an artichoke and some broccoli.

Overall, I can see why this restaurant is so popular. It had a large variety of Belgian comfort foods, which I believe they change up daily. Most people dining there were locals. Prices were a little more expensive for students on a budget, but quite reasonable for the amount of food you get. What’s interesting about this restaurant is that you have a chance of sharing a table with other diners too since they do have communal seating arrangements if you are dining with a small group. A very casual environment with good food.

My sister had met up with her coworker and wife, and they had asked me where to eat… We were near Barcelonetta, and I was not very familiar with the restaurants in that area. A quick search on Tripadvisor suggested us to go to to El Vaso de Oro. It’s extremely close to the Barcelonetta metro station, but when we got there, we questioned if we were at the right place. From the outside, the wooden signage makes it look like an old pub. Peeking in, you’ll see a line of chairs against the bar. Locals all having some beer and tapas. Along the wall, you’ll see a few tables with no chairs. But don’t make that be the reason you leave, because it offers some of the best food! You’re going to have to squeeze yourself here to even find a spot to stand… Yup, we ended up standing by one of the bar stools, because there was no room at the long bar table. Worth it though!

We had no idea what to order and with the menu being all in Catalan, it was quite difficult for me to understand anything. Service isn’t amazing or anything because it’s extremely busy in here, but this old Spanish man who worked behind the bar was really nice and would pop by to help us out. We asked what he would recommend, and with his limited English abilities and some finger pointing, he ordered several dishes for us to share. We got some complementary free baguettes, which were typical. Then, we got some Iberian Ham Croquettes. We also got some Iberian Ham Montaditos. Very typical Spanish tapas. I really enjoyed the croquettes since they are a little cheesy with the hint of ham. The Iberian Ham Montaditos were just alright. I’ve learned that I’m not a huge fan of Iberian Ham. I find it very strong in the pig flavour, and it’s not something I’m entirely into. It can also be quite tough sometimes and if there’s fat, then it’s very hard to chew. I’m more into the prosciutto type of ham, where it’s sliced very thing and easy to chew.

Next up, we got the Russian Salad. This is also a typical Spanish tapa. It’s basically like a tuna salad. It came with these little baked pieces of bread, so they were super crunchy. The only thing was there was more salad than the bread, so you would get so much leftover salad to eat on its own. Putting the salad on the bread was so much better because you get a crunch as well. I would recommend getting this salad!

Lastly, we got the Steak, which is what this cerverceria is famous for! Honestly, I didn’t get how good steak could be when I was reading the reviews. In fact, the steak isn’t that cheap either, and you only get around 8 pieces. But holy….these were heavenly. It’s cooked to perfection at medium rare and were the most tender pieces of steak I’ve ever had. They come already cut into cubes so it’s easy to eat, and there isn’t too much seasoning or what, but the flavour of meet just bursts in your mouth. Super juicy and is a must order! They also have steak with foie, but our friends were not big fans of foie. I could only imagine how great that would taste. We ended up ordering another plate of this steak because it was so good. I could seriously just come here to have a plate of this to myself and being fully satisfied.

Overall, extremely satisfied with El Vaso de Oro. We almost came back here another time because we were craving the steak so much. Even my Spanish professor recommended this spot for good steak. Super local place where you’ll here Spanish or Catalan only. I don’t think I saw any tourists when I went! It’s not the cheapest place to get tapas, but I think the quality of food makes it worthy. Good place to just grab a snack, but maybe not get full.

The Shore Club is famous for their seafood and steak and is located at Dunsmuir Street in Vancouver. The ambiance is very nice and they have a restaurant side as well as a bar side. Food and service is great and professional! An upscale restaurant though, so prices were a little on the higher end.

Lupo is a beautiful Italian restaurant located in Yaletown. The ambiance is spectacular although the menu is quite expensive. All the dishes are presented beautifully and tastes excellent! Great restaurant to go to for a special event or even just a night out!

So I finally uploaded the pictures from my friend’s birthday dinner. Sorry if the quality isn’t as good. The restaurant was really dark! So we went to Chop Steakhouse in Richmond for dinner. We reserved a party room so it was closed off from the rest of the restaurant. The ambiance was excellent, but I found the server to be a little annoying. He came back too often to check on us even though we had a sliding door and all. The food was really good though, especially the Chop Platter. Prices are the typical white restaurant prices I would say. Great environment though, especially since it’s under a hotel. Looks real grand inside!

Mango, Passion Fruit, Pineapple and Coconut All Blended with Ice.

Our Most Tender Steak. Served with French Fries and Onion Strings.

Cheesecake Factory can be found all over the States, so if you live in Vancouver, you can head down to Seattle nearby to try it! The portions are extremely large for the price you pay. Line ups are always a little long, but it’s worth it. Be sure to leave room for their famous cheesecakes or get take-out! The cheesecakes are so delicious!