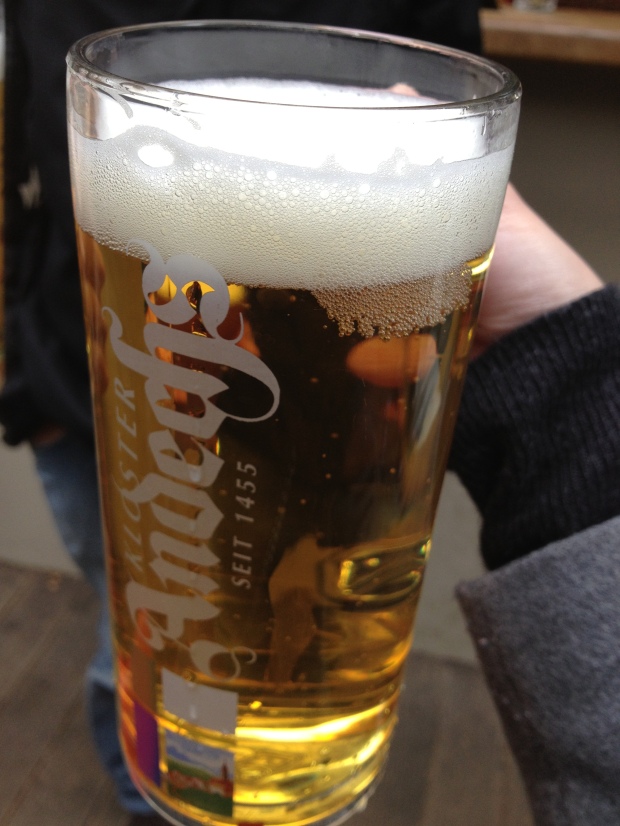 After Munich, we took a midnight bus to Berlin. The bus was around 8 hours long and it was a pretty terrible ride. Bus smelt like beer and the chairs were extremely uncomfortable. But the price was definitely a fraction of what we would pay for a flight. If you’re looking for a hostel, I would suggest the Cats Pajamas Hostel! Extremely cheap and one of the cleanest and friendliest hostels I have ever stayed at. We hadn’t done research for Berlin, but we were recommended to take a biking tour of Berlin. Our friend recommended us Fat Tire, which I would definitely recommend to everyone. It’s a great way to explore the city without going by foot. It was also fun to ride a bike around the city, and it was pretty safe even on large roads. Only downside is it’s a bit difficult to take quality pictures since you only pause for a bit and you also want to listen to the guide explain the history. Anyways, our tour included a lunch break where the tour guide took us to this restaurant near a park. It had outdoor seating with heaters and was a fun way to grab a snack. Of course, we tried some beer from Berlin. I wish I remembered the name of the beer, but it’s been way too long. I just remember it to be really good! Especially after biking on a cold day.

We also grabbed some food and I got the sausage in a roll. I believe the beer garden was called Der Schleusenkrug and it was in the Tiergarten, which is a beautiful garden. The beer garden had a barbeque and grill stall, which is where we got our food. I thought this was just okay. The bread was a bit hard, and the sausages weren’t the most amazing I’ve had. It was also quite pricey since it was in the garden, but the atmosphere made it fun! 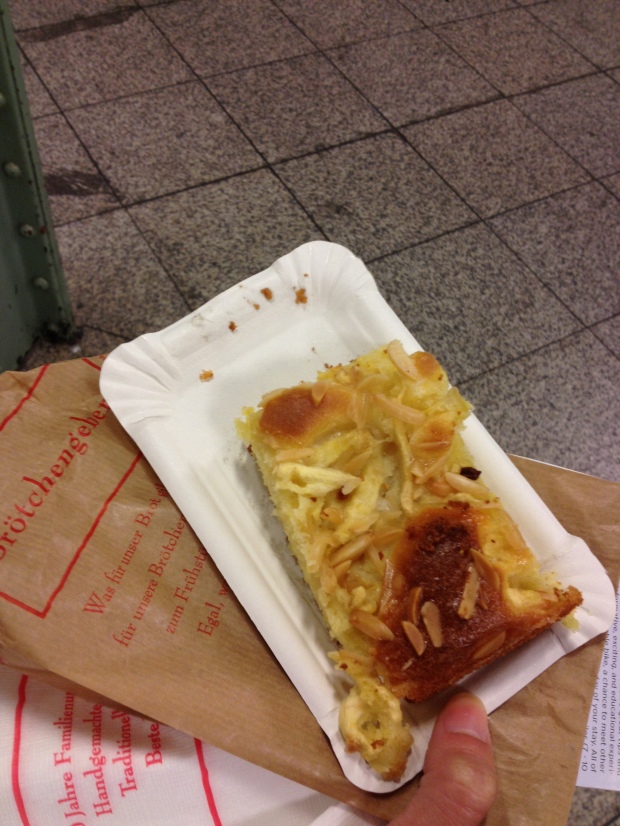 On our way back to the hostel, I was getting hungry and stopped by a bakery in the metro station. It’s sort of like seeing a Dunkin Donuts or something and this shop had a variety of German pastries and desserts. I picked up an Apfelkuchen, which is basically an Apple Cake. At first, I thought it would be more of strudel, but the texture was crumbly, so much more like cake. It was topped with slices of apple and almonds. I quite enjoyed this!

For dinner, we had wanted to go to Burgermeister, which was one of the top restaurants in Berlin. To our surprise, it was more like a stand and the seating was outside under the metro bridge. Apparently the stall used to be a public washroom…Interesting…Anyways, it was pouring rain, and there was a huge wait and was probably impossible to find a seat. We ended up resorting to look around for food nearby. And guess where I suggested after a cold rainy day… Vietnamese food! Yes, in Berlin of all places… We found Saigon and More just across the street and settled there as they had free wi-fi. Of course. I had the Beef Pho and honestly, it was great to have some warm soup with an Asian flare. But really, this was probably worse than any 24 hour Pho restaurant in Vancouver. I mean, it satisfied me for the time being, but the noodles were not the typical pho noodles, and they were cooked pretty al dente which is odd for Vietnamese noodles. The soup was also flavourless, which is a big differentiating factor for pho. Prices and service were decent, but definitely not very authentic.

After dinner, we stopped by a bakery and I picked up a Berliner Pfannkuchen. I chose this after doing a quick search on Google to see what were some common German pastries. This is a traditional Northern Germany pastry and is very similar to a doughnut but without the hole in the middle. instead, it’s filled with a jam filling. It’s also topped with sugar or icing sugar. I thought this reminded me of those Asian doughnuts you get at the Chinese bakeries, except it was filled with a jelly. Not bad!

Doner Kebabs are extremely popular in Berlin. Some even say that the doner kebab was invented in Germany because there were so many Turkish living here. Doner kebabs are essentially a Turkish dish made of meat cooked on a vertical rotisserie. The meat is usually lamb, beef, or chicken. Some people also refer to it as a shawarma or gyros. The meat is sliced off the rotisserie and is put inside a pita bread. Inside, it’s also filled with a variety of veggies, like cucumber, onions, tomatoes, chopped lettuce, cabbage. Sauces are also an important part of this snack and can include hot sauce, garlic sauce or a yoghurt sauce. I have to say, I was really impressed with the Doner Kebab here in Berlin. The pita bread was soft, and the mixture of ingredients was just perfect!

Another well known snack in Germany, and especially Berlin is the Currywurst. Well, actually currywurst was invented in Berlin, and hence so famous. I don’t have a picture here, but my friend ordered it and we were a bit disappointed. Currywurst is a fast food dish, and as the name says, it has pork sausages (wurst), and they are cut into slices. Then they are topped with lots of ketchup or tomato paste, and topped with lots of curry powder. The curry powder was what disappointed me. I thought that it would be a curry sauce. I’m not a big fan of just having curry powder sprinkled on my food, so I wasn’t a huge fan of this dish. However, it seems to be a popular snack for everyone else. I also thought it was cute how this stall was called Checkpoint Curry, since we were literally just across the street from Checkpoint Charlie!

And to finish the post off will be a beautiful piece of the Berlin Wall. A must see when visiting Berlin. Compared to Munich, Berlin is a city with so much history. In my eyes, Munich is a much more modernized city and was extremely clean. It’s also known to be a wealthy city. Berlin, on the other hand has much more culture and history behind it. Sometimes, walking down the streets, I can feel the city to be a little saddening and cold, and after seeing the Berlin Wall, you can really get a sense of all the struggles and pain people went through. I mean, you will only get a sense of it, and can never really understand what happened back in the days.