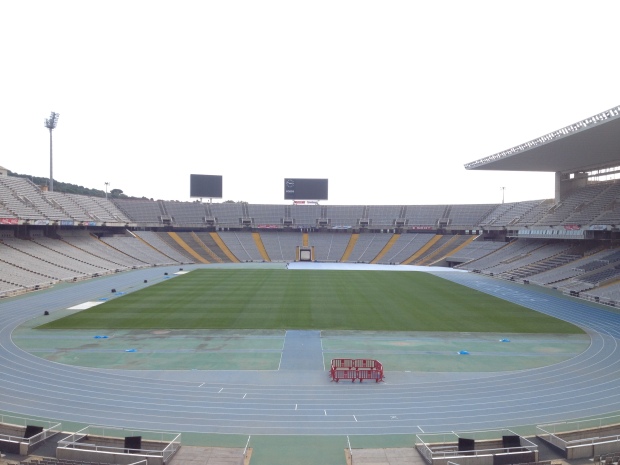 I took a Spanish history class at ESADE, and it was one of the best classes offered there! Truly learned so much about Spain and coming from a country with such a young history, it was so interesting to actually finally understand some of the European history. One our our assignments was to visit an assigned site in Barcelona. For my group, we were assigned to visit the Olympic Museum and then check out the Estadi Olimpic Lluis Companys, which was the stadium that was renovated for the 1992 Summer Olympics. For tourists who are only in Barcelona for a few days, the Museum is definitely not worth your time as it only gives a timeline of the history of the Olympics. However, the stadium is worth a visit if you are going to see Montjuic since it is on the way up the mountain and also free. Not anything impressive, but it’s pretty cool to know how the Olympics really changed Barcelona from a city of nothing to one of the top tourist destinations! The Barcelona Olympics is said to be one of the only Olympics where the investment and costs actually benefited the city more than any other host city in Olympic history. It’s almost difficult for any city to repeat the dramatic change that occurred. 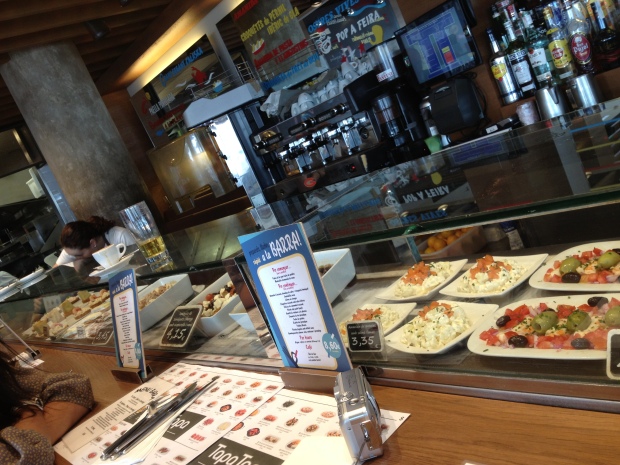 Anyways, after an afternoon researching for our assignment, we headed back to Plaza Espanya on the bus. Next to the Arenas, which is now a mall, but a bullfighting arena in the past, is Tapa Tapa. There are around 3-4 Tapa Tapas around Barcelona, and it’s known to be catered towards tourists. 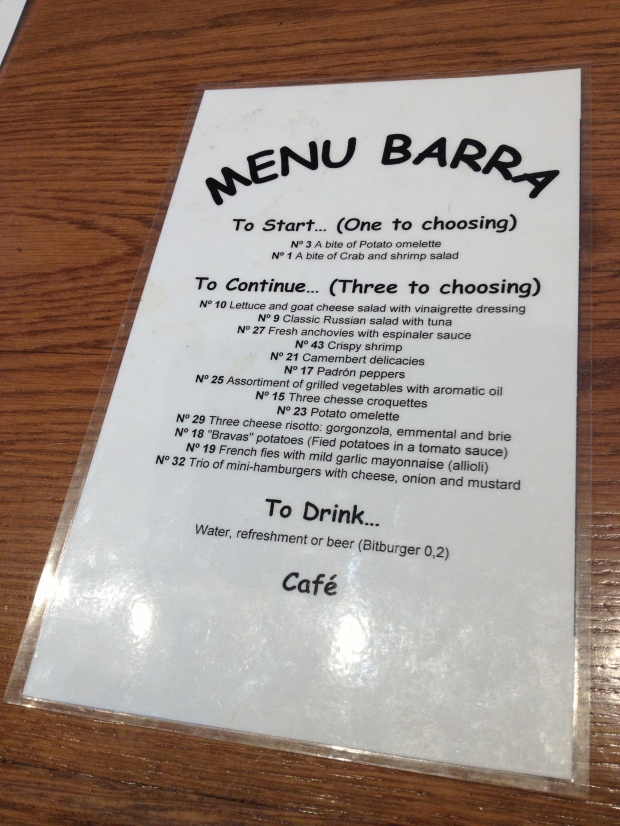 We chose to settle here anyways to grab a snack. The menu barra really caught our eyes since it was a pretty good deal. I believe the menu was only 8,60 euros, which is really cheap! An amazing deal, since most of their tapas are at least 3 euros anyways. I’ve been to other Tapa Tapas before as well, and I realized that they do not offer this lunch menu. I think it’s because the Tapa Tapa at the Arenas has less traffic, especially tourists. The other locations include Maremagnum at Port Vell and on Passeig Gracia, which constantly has tourists. Since it’s a tourist spot, they also offered an English menu to make things easy. 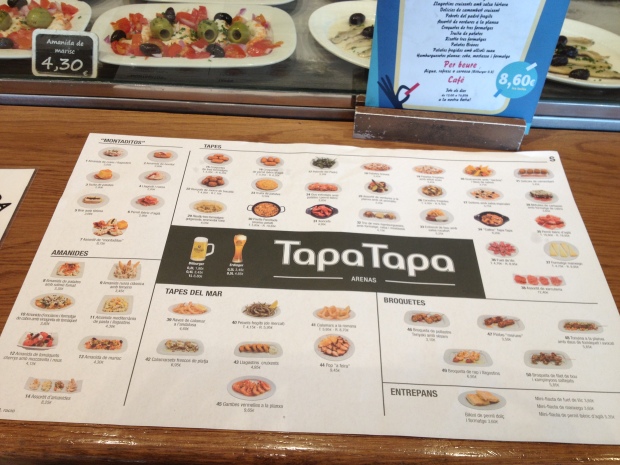 I think what attracts tourists to Tapa Tapa are the colourful pictures of their menu that’s always placed outside. For foreigners, it’s always great to see pictures to know what they’re ordering. 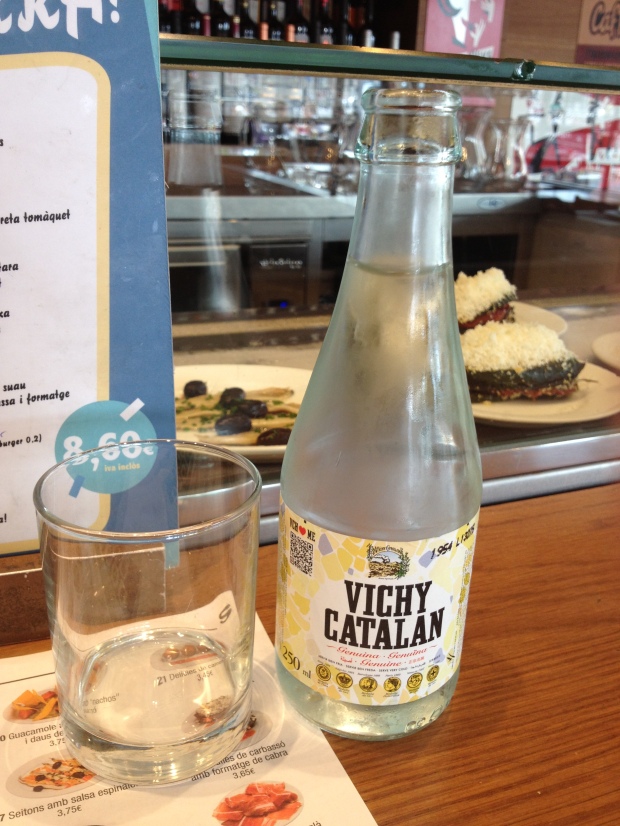 For our menu, we were given a choice of water, soda, or beer. I ended up choosing a sparkling water. It’s called “agua con gasse” in Spanish. I find that Europeans drink sparkling water a lot more than Americans. It’s not something very common for us. This one was called Vichy Catalan, and the bottle was really cute! 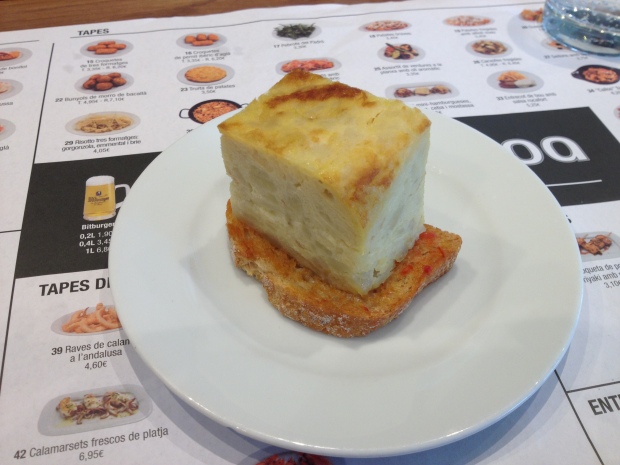 We each ordered the set menu, but chose to share some of our food, so hence there are lots of food pictures! To start, we all chose the Potato Omelet, which is a typical Spanish tapa. I actually ate this quite frequently at school, since it was an affordable item at the school cafeteria. It would come in a sub with the potato omelet inside. Potato chunks are mixed with egg to form this little cube. It’s usually served cold and placed on bread that has been brushed with tomatoes. 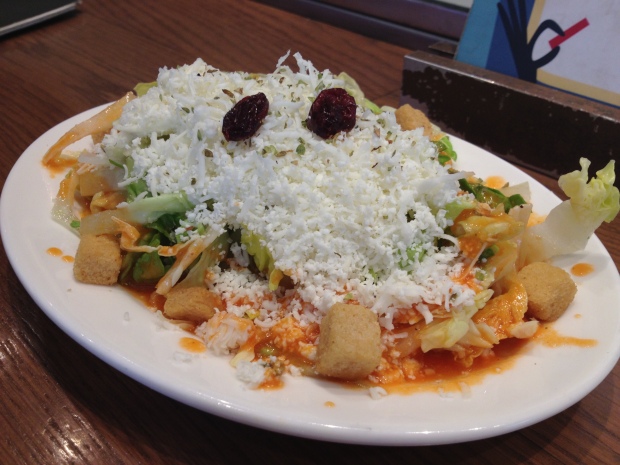 My friends ordered this as they were huge fans of goat cheese. I still haven’t been able to acquire to this taste, so it was only okay for me. Came with some croutons, and the vinaigrette dressing really made the salad tasty! 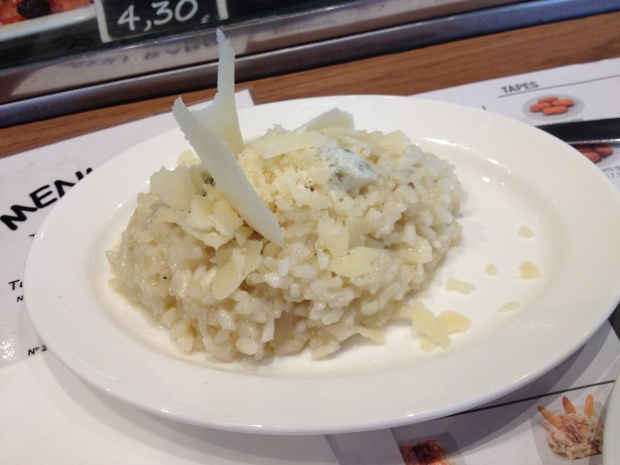 Some of us also got the Three Cheese Risotto. I loved this one! It was very creamy and cheesy since it had three types of cheese. For people who aren’t into very strong cheeses, this dish may be a little strong for your liking. Since I’m not into blue cheeses, the Gorgonzola really hit my taste buds. However, since it was mixed with two lighter cheeses, it wasn’t as strong.

This was by far one of my favourites! Ever since my first time trying croquettes, I have been so into them! These were purely just cheese, and hence extremely cheesy when you bite into them. The outer layer was also deep fried, but not too oily. 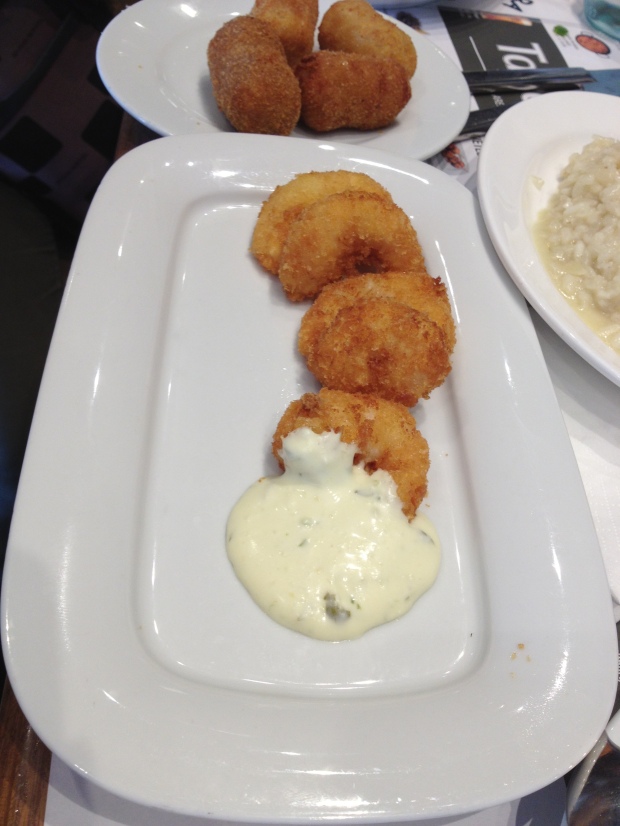 These were great to snack on! Reminded me of popcorn shrimp back at home. It came with a garlic mayo. The outer layer wasn’t too thick, and the shrimps were still fresh. 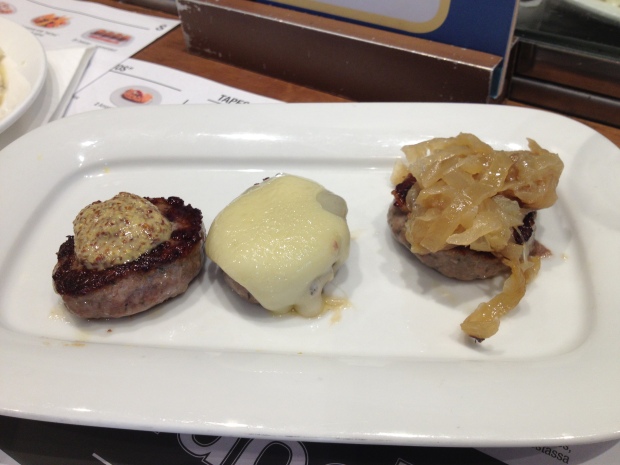 Trio of Mini Hamburgers with Cheese, Onion and Mustard

This was also one of our favourites. They were actaully hamburgers without the burger. So essentially the beef patty only. On the left, the patty was topped with mustard. The mustard was so delicious! Not the cheap American yellow mustard on hot dogs. This was grainy mustard with mustard seeds still in it. My absolute favourite! In the middle was a patty topped with melted cheese. This was also quite good, but the cheese cooled down quickly, so wasn’t as cheesy anymore. Lastly, on the right was a patty topped with grilled onions. I didn’t expect this to taste anything special, but the seasoning they used on the onions and after being grilled really made it a great patty! 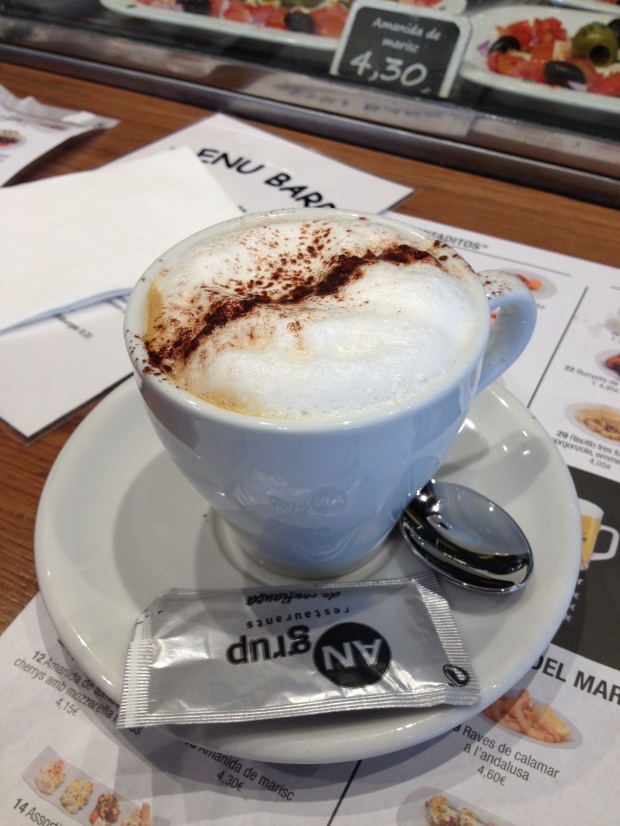 To finish off your meal, there’s coffee! It’s popular to finish your meal with a cafe! We really enjoyed this since they let us choose any type of cafe. Usually, it’s strictly coffee. They let us choose and we chose the Cappuccino. It came with plenty of foam and topped with a bit of coffee powder. Not shabby! 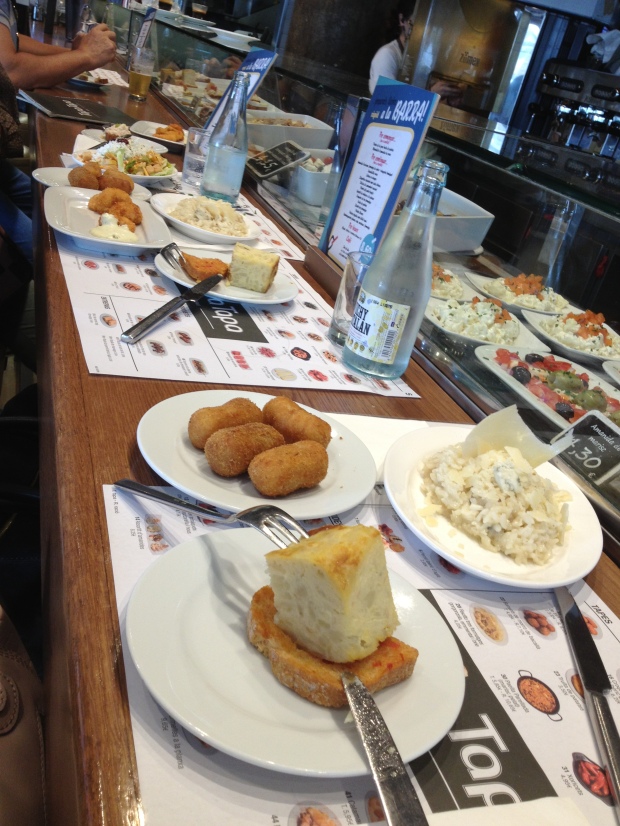 So even though many people say Tapa Tapa is just for tourists, I think the lunch menu at the Arenas is quite worth it. I’ve been to the other locations and don’t think it’s as worth the money you pay for, and agree that they are quite touristy. Our service was attentive, and sitting at the bar was lots of fun! You get a taste of typical Spanish tapas at a great value.