There are always plenty of things to do in Barcelona, and one afternoon, we decided to visit Montjuic. Montjuic is a hill in Barcelona and very close to the city center. In fact, you can hike up to it just by walking up from Plaza Espanya. From the Palau Nacional, which houses the Museum of National Art of Catalunya, this is the beautiful view you get of the city. If you continue up the hill, or choose to take the bus, you will reach the top of Montjuic where you will find a fortress. 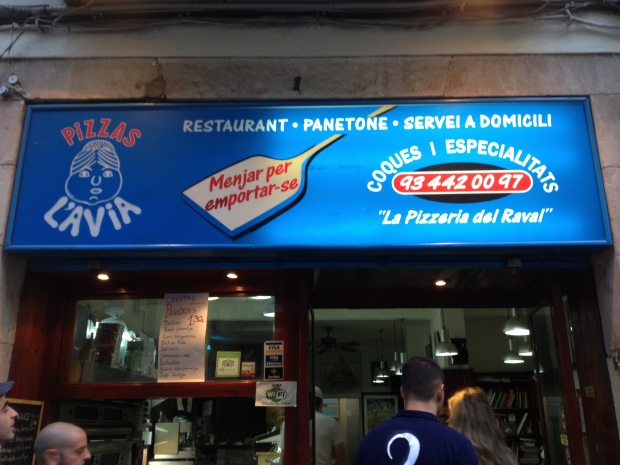 After our mini hike, U took us to Pizzas L’avia. It’s in the El Ravel neighbourhood, which is sometimes known to be a little dangerous at night. Her brother said that the little shop is great for cheap local food, so we took the adventure to check it out before it got dark. The place doesn’t look the most amazing on the outside, but the food is great and cheap!

I love how they actually make their paella in a giant pan. It was the first time I actually saw such a big paella pan in person.

They also have a bunch of other dishes and desserts. Yes, the dishes are not exactly fresh, since they are pre- made, but freshness wasn’t really a big factor in making these dishes delicious.

They are famous for their Empanadas. We chose the Honey Empanada and Spinach Empanada. They were warmed up in their oven and filled generously. A great value for only around 1,30 euros each!

I guess someone also got a Salad… Typical salad, nothing difficult in making this one.

We got the Prosciutto and Cheese Pizza. Their pizzas are quite interesting. They don’t really dig a hole in the middle to put the fillings in. Instead, they just place the toppings right on top, so you don’t exactly get a crust on the side. The pizza was really delicious though! Extremely fluffy and although the ingredients are basic, they really work well together.

We also got two dishes of the Paella. It’s not the best paella I’ve had, but it tasted really local and I liked how it wasn’t too saucy. The rice was a little overcooked, but I actually liked it since I find that some of the other restaurants cook it too al dente. There was an abundant of seafood such as shrimp and mussels in it.

U said that the Bacalao here is amazing. It’s a very common dish for the Spanish, and it’s basically cod fish topped with lots of tomato sauce. This one also had eggplants and other vegetables. I found the sauce to be very similar to a ratatouille. I really enjoyed this as the sauce was actually sort of sweet!

Lastly, we had another fish dish, and I actually found this very similar to the Bacalao, but with less sauce. I couldn’t really tell the difference, other than the fact that it was more deep fried. Tasted like cod to me too…

Overall, Pizzas L’avia is a great place to check out if you want to try some local food and at a cheap price. You can also get some of the items to go.