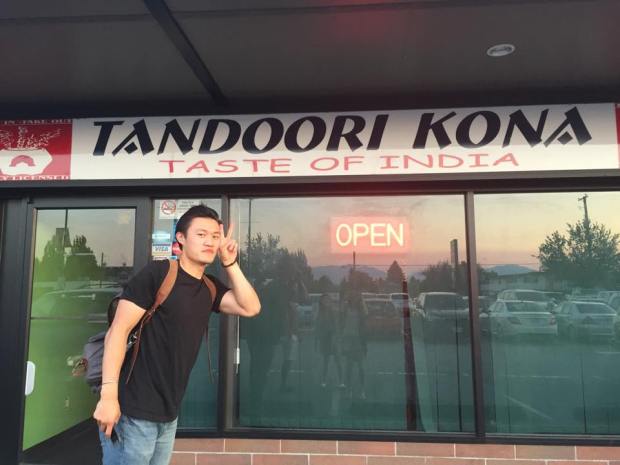 Looking for a new place to try, MH (pictured above as he wanted to be featured) suggested I try Tandoori Kona in Richmond near Cambie and No. 5. I’ve heard great things about the restaurant, but I just never made the effort to try since it’s sort of out of the way. The restaurant doesn’t look very nice from the outside, but I was surprised that the interior is actually pretty nice and well decorated. It’s fairly small inside and on a Saturday night, we were lucky to find seats without reservations.

We ended up inviting MW, S and J along and that was perfect since we could try more dishes! We started off with Vegetable Samosas (although we had wanted meat samosas, but they had sold out). It came with two sauces – one being slightly spicy.

For $1.50, you get two samosas, which is a pretty good deal. The samosas were crispy on the outside and stuffed with peas, potatoes, and spices.

MW suggested we try the Lamb Vindaloo. The boneless lamb is cooked in ginger, coconut, vinegar and cream mixed with potatoes. For all the curries, they will ask you how spicy and you can choose from mild, medium, or spicy. We went with medium, but I was surprised it wasn’t too spicy. MH commented that this was surprisingly very good. The lamb was tender and the sauce was a nice change from your typical masala or butter chicken.

Well we had to get the typical Butter Chicken as well. MH and MW had told me that this was very good at Tandoori Kona. The boneless chicken is marinated in their special buttery sauce, cooked in garlic ginger, and cream. Chicken was well tenderized and the sauce was creamy yet flavourful. 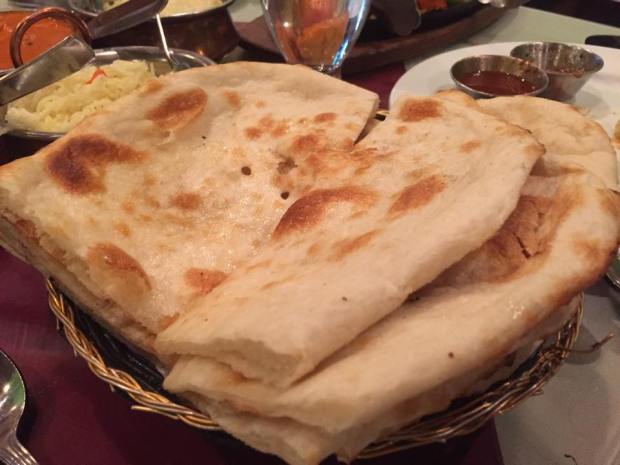 All the dishes came with Naan as well, which is baked in a Tandoor oven. I really liked this leavened bread because it didn’t feel oily at all! It was much different from the naan I’ve tried at other restaurants, which are usually drenched in oil. Very fluffy and perfect to pair with all that sauce!

I think you get a bowl of rice for each dish you order, so we got 4 bowls of basmati rice. Rice was fluffy and seasoned with some vegetables. The curries may look small in the bowl, but along with the naan, rice and all the cream that’s in it, you actually get really full! 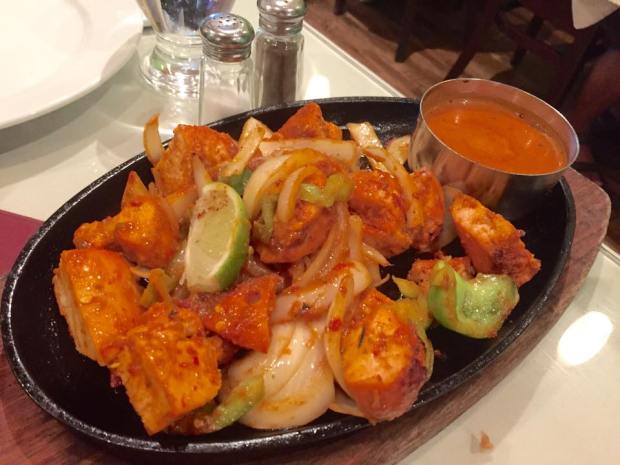 The Chicken Tikka featured boneless chicken marinated in yoghurt ginger, cooked in a Tandoor and served with butter sauce. This was slightly more spicy and the chicken was very tender. I thought the sauce was not really necessary since the chicken is already well flavoured.

We also got the Mixed Grill (I think it was called a different name on the menu), but the platter featured BBQ chicken, chicken tikka, lamb tikka, fish tikka, and was served with butter sauce. This is great if you haven’t tried a lot of their grilled dishes and want a bit of everything. I found that the fish wasn’t that great since it didn’t seem very fresh.

Overall, Tandoori Kona is definitely a hidden gem in Richmond. Prices are reasonable since Indian food is very buttery and you will get very full with the rice and naan. Good idea to come here with a small group of friends so you can share a variety of dishes. However, the restaurant is fairly small, so larger groups may need reservations.

Pros:
– Great food at reasonable prices
– Ambiance is surprisingly quite nice inside

Cons:
– Service is a bit slow (seems to be run by husband and wife)