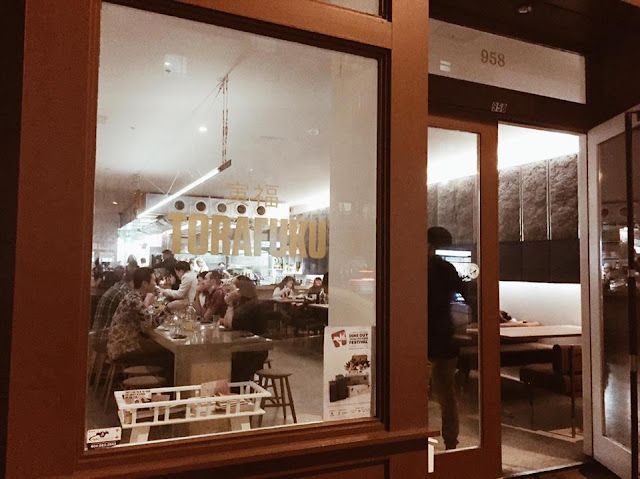 Our first Dine Out Vancouver for 2016 was at Torafuku. I’ve been wanting to try this new restaurant ever since having a good meal from their sister food truck, Le Tigre. The Dine Out menu was $30 per person. 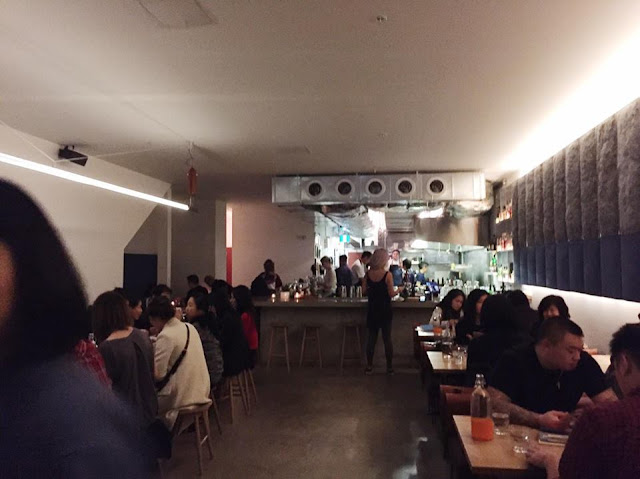 The interior is minimalist with barely any renovations. There is one long communal table and some booths on the side. We had made reservations early in advance but unfortunately we were still given bar seats. S was quite disappointed since he had wanted a more intimate seating. Bar seating was fun to watch the kitchen, but it definitely wasn’t very comfortable. 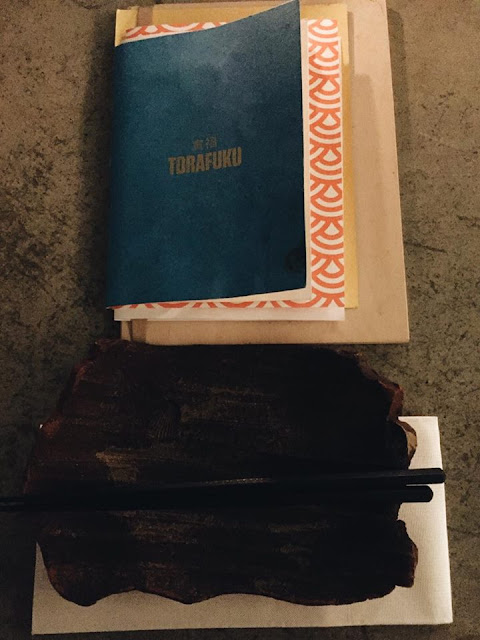 Love the wooden plates. Definitely has that hipster ambiance. 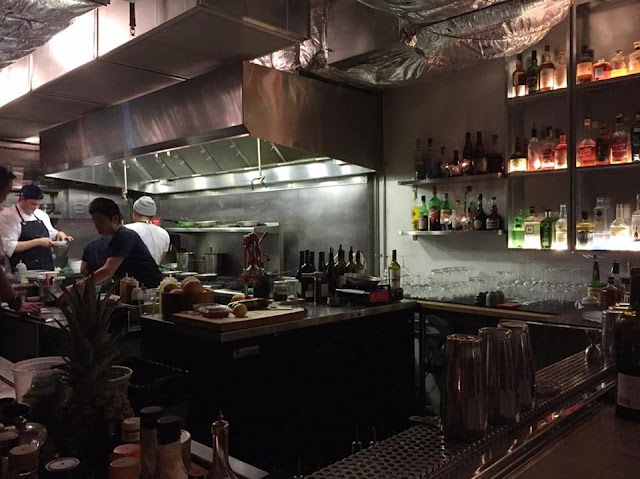 Since we were seated at the bar, we got a good view of what was going on in the kitchen. 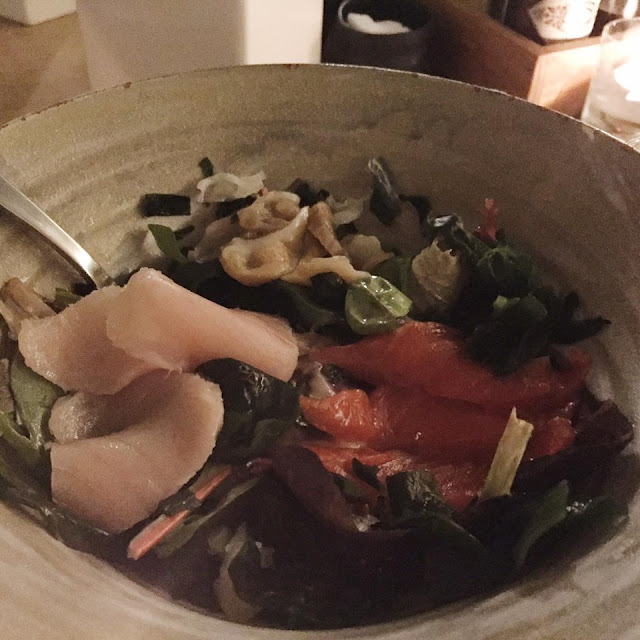 Apparently, we were only allowed to choose one appetizer per two people for the Dine Out menu. We were slightly upset with that since we had already heard that portions would be small. (It did say in fine print at the bottom of the online menu, so my fault for missing that!) Anyways, we chose One Fish, Two Fish. This was a bowl of sashimi salad with salmon, tuna, and geoduck sashimi on top of salad greens and wakame mixed with a sesame dressing. I quite liked this as the mix of seaweed and greens gave a nice texture, but I wish there was more dressing as it was slightly bland. Loved the texture of the geoduck though and the sashimi was quite fresh. 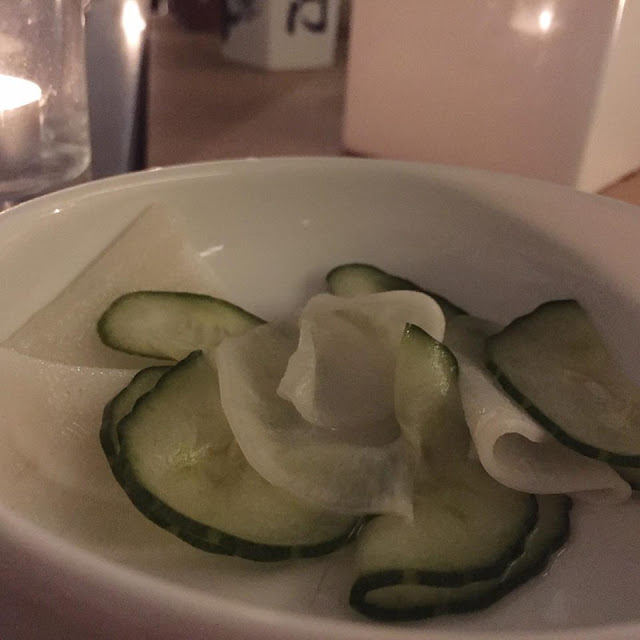 While waiting for our entrees, the server brought us a complimentary side dish of Pickled Cucumbers and Radish to share. I enjoyed the pickled flavour and it definitely opened up my stomach for more food. 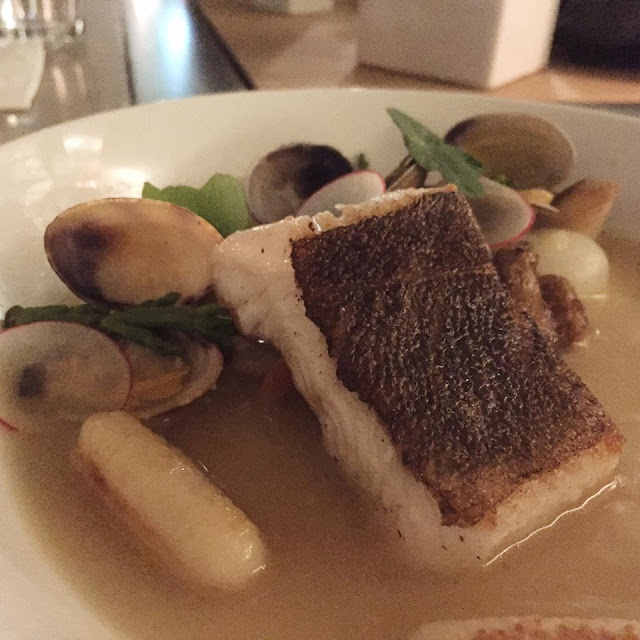 For my entree, I chose the Call of Duty (CoD). If you go through Torafuku’s menu, they have such witty names! This consisted of crispy ling cod, clams, root veggies, and handmade gnocchi in sake a kumbu broth. The fish was moist and my favourite was the handmade gnocchi. The broth was very flavourful as well and I could’ve had a whole bowl of this. Veggies were slightly undercooked for my preference. Overall, a good dish, but the portion was way too small! The fish was almost half the size of usual portions. 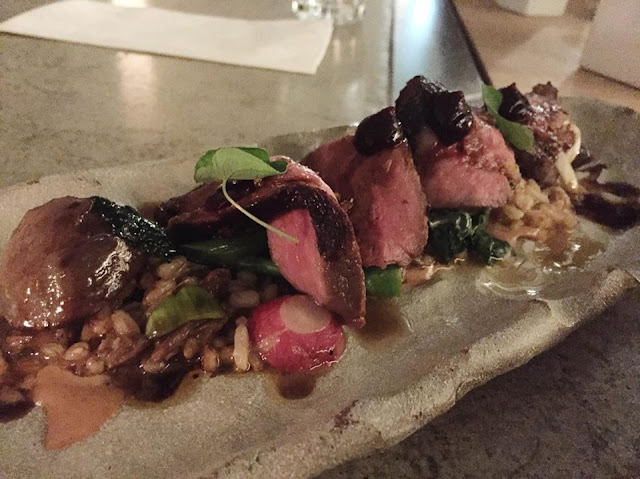 S got the Kare Kare, which I preferred out of the two entrees. It came with seared beef blade steak, on top of a 3 grain risotto, with pickled veggies, oxtail, and peanut ragu. The flavours were delicious and the beef was cooked to a beautiful medium rare. Again, portions were way too small though. This was more like an appetizer. 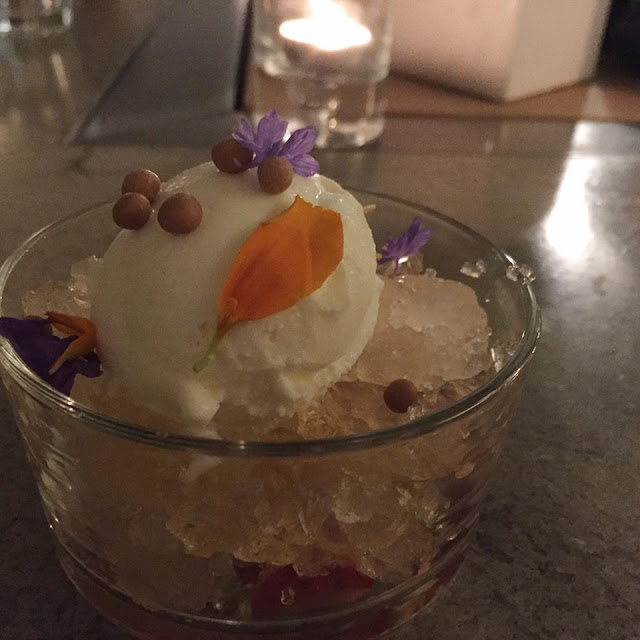 For dessert, the menu online had said we could choose between two options and I had seen pictures of others from the week earlier order the second option. However, our server told us that there was only the J-E-L-L-O that night. Quite disappointed since I wanted to try different desserts. However, the J-E-L-L-O has got to be one of the best desserts I’ve had in a long time. It was an oolong infused yuzu jello, with condensed milk ice cream and topped with crispy salted caramel. The dessert was light and refreshing and the milky flavour paired well with the slightly citrus jello. I had nothing to complain about this and could eat this over and over again! 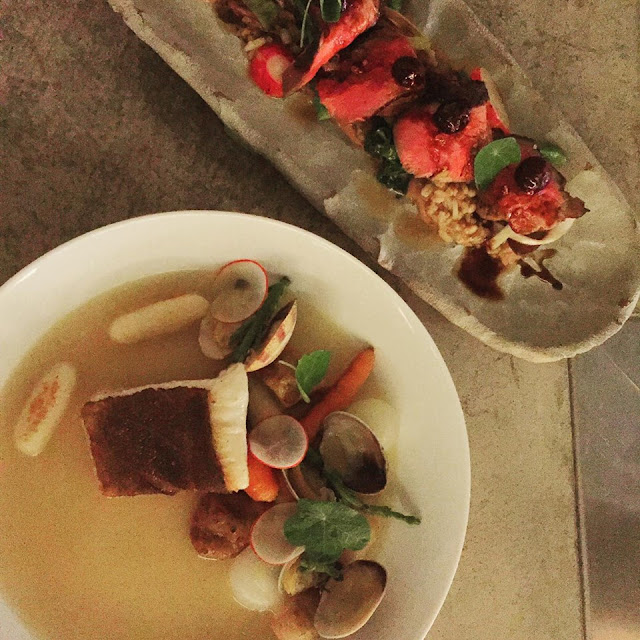 Overall, I was quite pleased with the dishes from the Dine Out menu. However, we both agreed that the portions were way too small! Especially the fact that we had to share an appetizer between the two of us and it still costed $30 per person. Service was also a bit cold. No one really checked up on us. We also ended up having to pay a visit to McDonald’s to fill up. I’m curious to see what it’s like during regular service though and will need to make a revisit to try their regular menu.