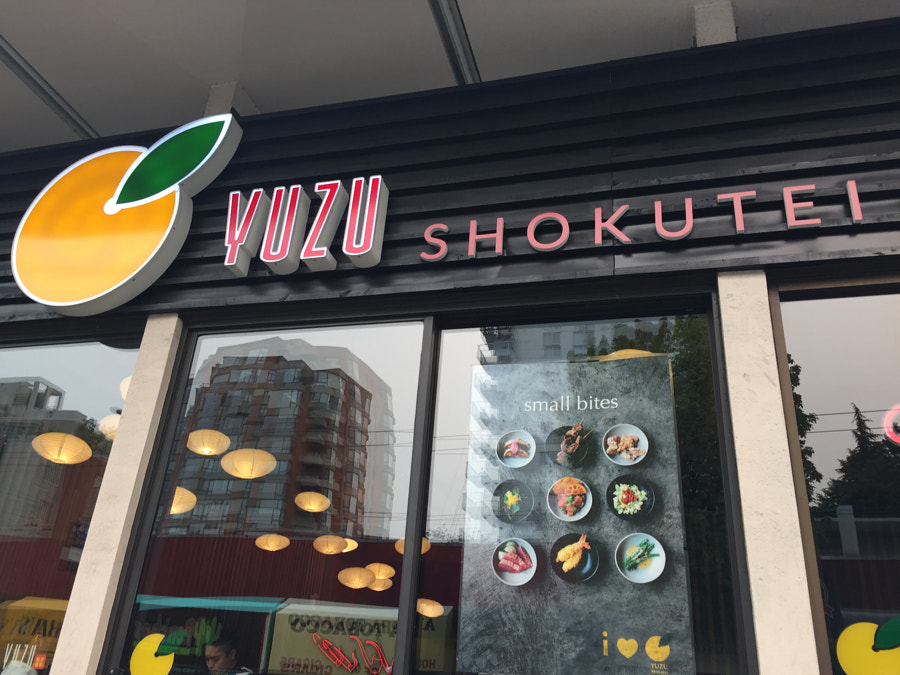 Yuzu Shokutei opened up earlier this year on Denman Street nearby Kingyo. The branding of the restaurant really caught my attention since its bright and fun. Plus, the pictures on their Instagram page really looked good! S and I decided to give it a try earlier in the summer when they were having a promo going on (yes – this post is from a while ago!). 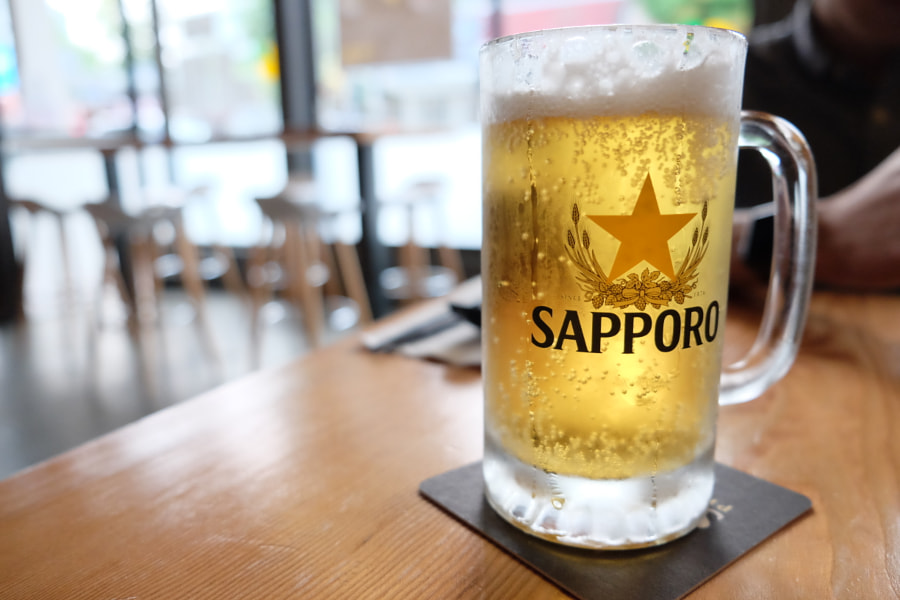 The deal was that if we liked their Instagram page, then we could get an appetizer and a pint of beer for $5. We got a pint of Sapporo which was refreshing after a long day at work! 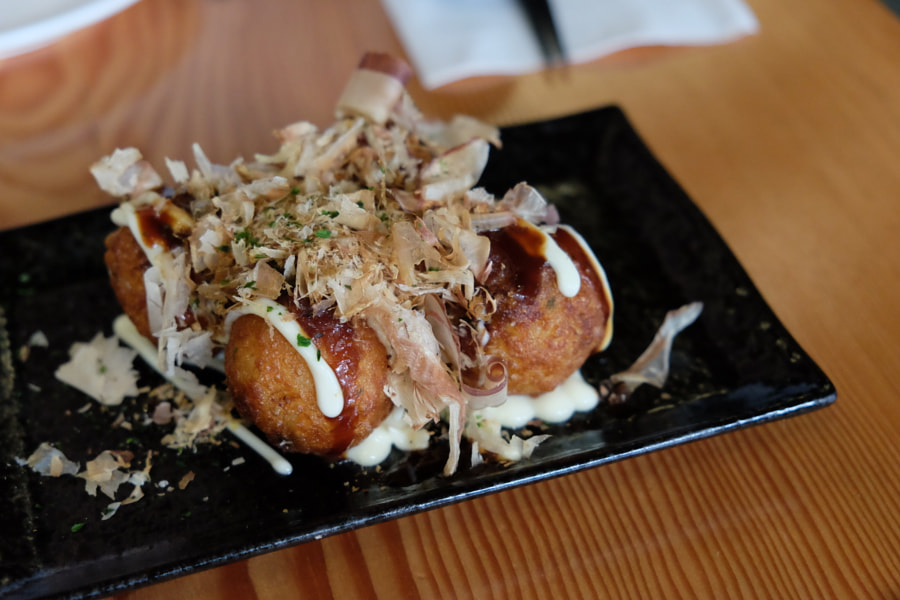 For the appetizer, we got the Takoyaki (octopus balls) which were topped with mayo, bonito flakes and nori powder. I really enjoyed this as the outside batter was crispy with the center piping hot and soft. They had a large piece of octopus in each ball. 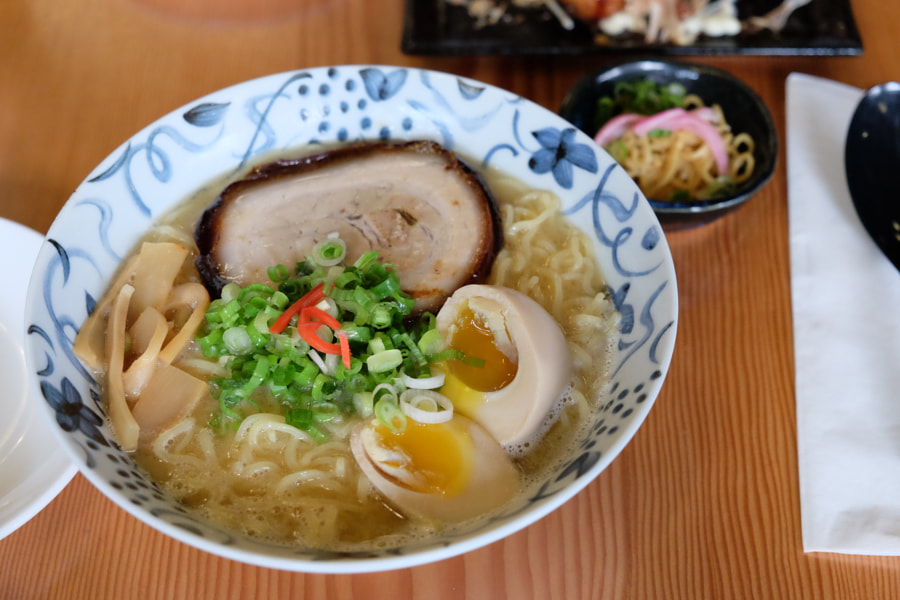 Both of us decided to try their ramen. Keep in mind that the restaurant actually has a variety of rice dishes as well, as they are more izakaya style, then a full on ramen restaurant. S got the Paiten Sea Salt Ramen which featured medium thickness noodles, slow cooked chicken broth, shio seasoning, aji-tamago, pork chashu, bamboo shoots, and green onions. The bowl had more than enough noodles but we both prefer the thin noodles at Danbo, so personally were not a huge fan. The broth itself was light in flavour and wasn’t overly salty, but we found it to be rather thick. As for the chashu, it was very interesting because the outer edges were very dark but not crispy. We thought it was slightly too fatty on the outer edge. I think if you like medium consistency noodles, then you will probably enjoy this. 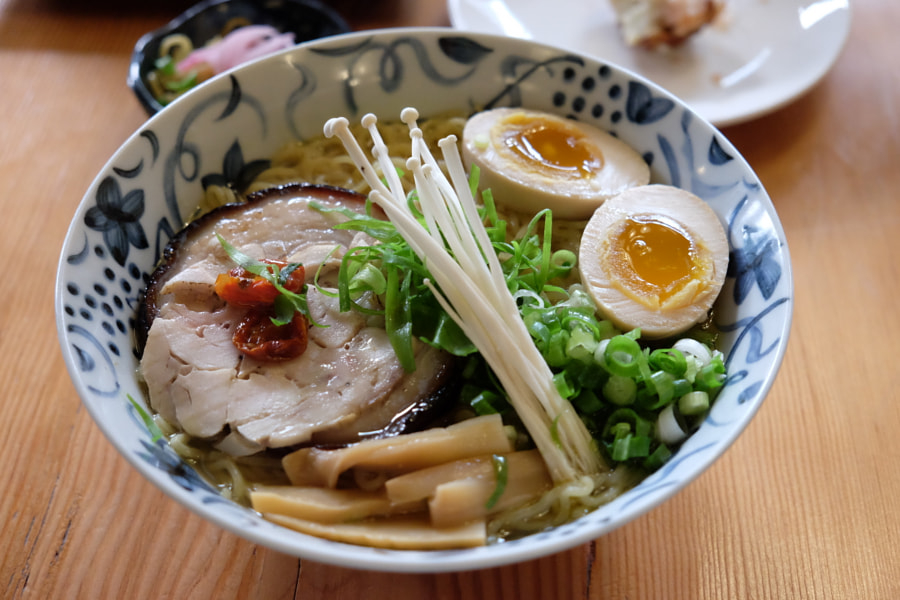 For myself, I had to try the famous Chicken Truffle Sea Salt Ramen. This features their signature tori broth, truffle oil, shio seasoning, pork and chicken chashu, aji-tamago, bamboo shoots, green onion, enoki, and wilted gem tomatoes. There are so many toppings on this that I found it a little overwhelming. But the first thing I noticed was the smell of truffle! I could smell it as the server brought it over. To my disappointment, I found that the truffle flavour is not very apparent in the broth itself. You can definitely smell it, but the taste is not as strong. The broth is basically the same as the Paitan Sea Salt, where it was too thick for my liking. Noodles were also medium consistency, so perhaps the reason I wasn’t a huge fan of it. The tamago yolk was spilling out in the center but the edges were slightly overcooked, so could be worked on. 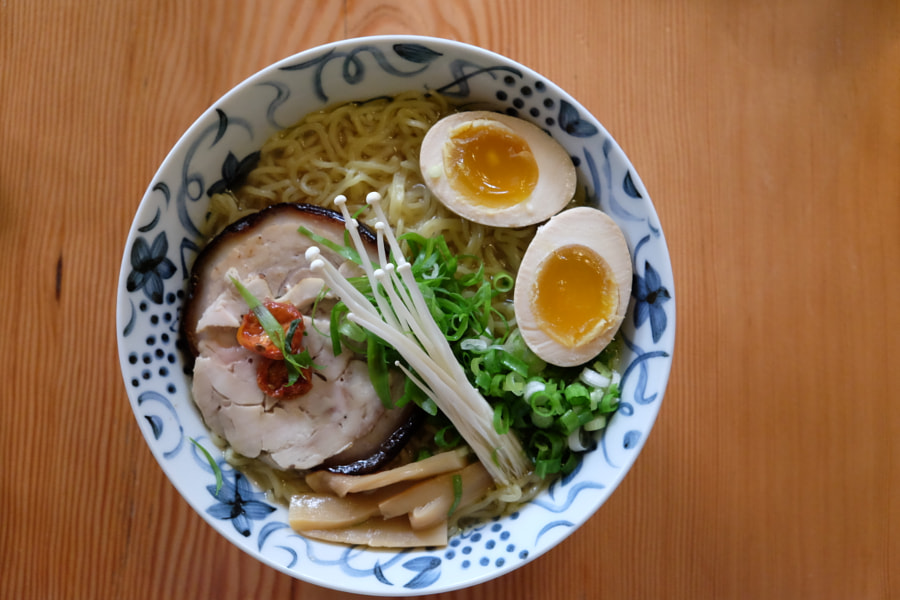 Overall, we personally found Yuzu Shokutei’s ramens to be quite average based on the ones we tried as we personally aren’t a huge fan of medium consistency noodles and the thick broth. However, I have to say the ramens are quite interesting and modernized. The portions are also pretty good for $12-14 in downtown. But with all the ramen joints around this area, it may be difficult for Yuzu Shokutei to compete, but hopefully their other izakaya items can draw the crowds!