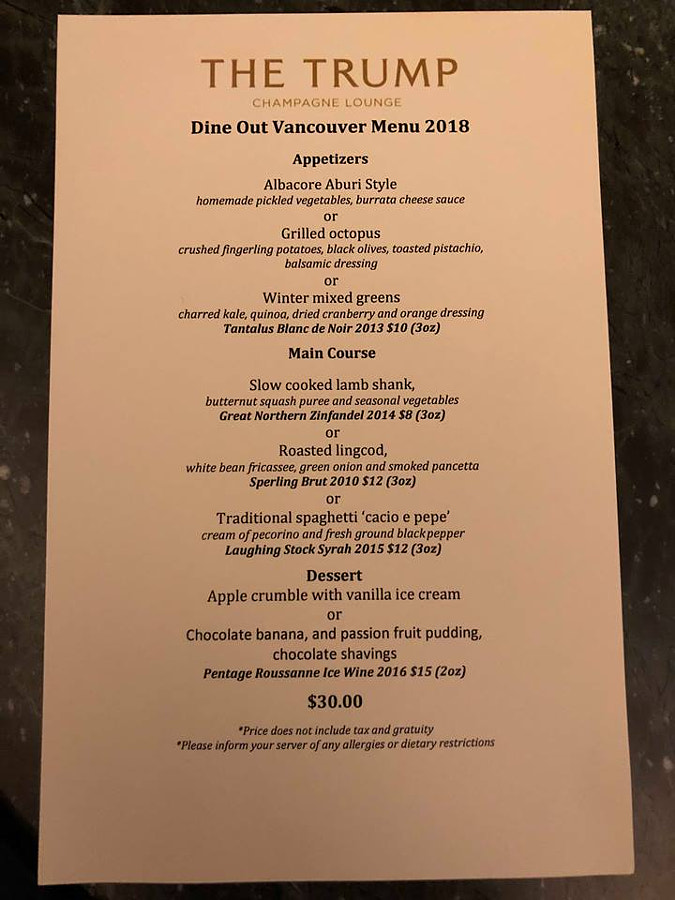 Posting quite a few months later for this year’s Dine Out Vancouver 2018, but I might as well in case it comes handy for next year’s festival. My first dine out this year was at the Trump Champagne Lounge and I went with S and M for a girls night out. We thought the dishes on the menu sounded decent and the price tag of $30 per person wasn’t too bad for a 3 course meal. We all didn’t know that the lounge served actual food as we always thought it was just afternoon tea, snacks, and drinks. The interior of the lounge was pretty as expected, but it was also a bit odd as the lounge is not really enclosed in another area. Once you open the door to the hotel, you’ve basically stepped foot into the lounge. Can be a bit odd as you see many hotel guests with luggage trying to find the check in area. Also, because it is a lounge, the tables and couches are extremely low. My back was hurting by the end of the night. Definitely a place more for drinks and light snacks, rather than a 3 course meal which requires full use of utensils. 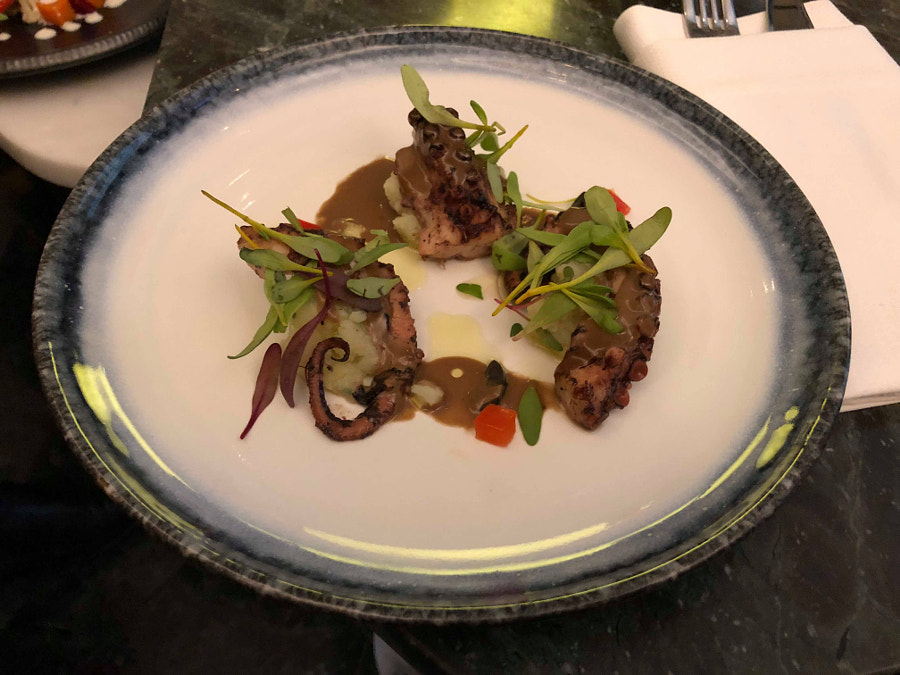 Anyways, onto the food. We tried both appetizers and the Grilled Octopus was my favourite. The tentacles were served with crushed fingerling potatoes, black olives, toasted pistachio, and a balsamic dressing. The octopus was not chewy at all. It was cooked perfectly to tender and had a nice char. 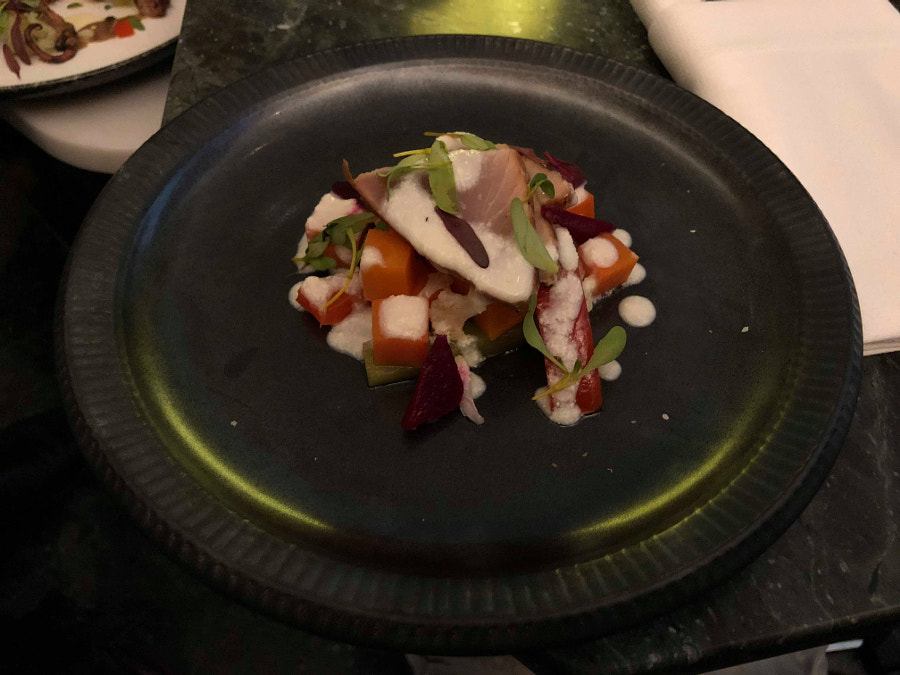 The second appetizer was the Albacore Aburi Style. The lightly seared albacore tuna was served with homemade pickled vegetables and a burrata cheese sauce. This was quite average. If you like pickled veggies, then you might enjoy this as they were definitely very sour and acidic. 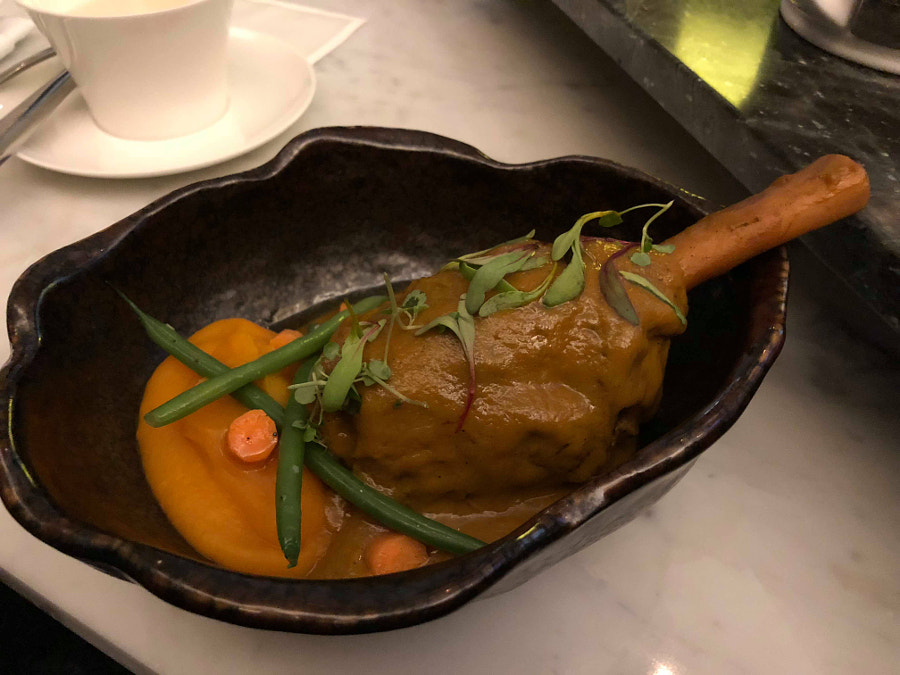 For entrees, we got both of the non-vegetarian options. The first was the Slow Cooked Lamb Shank. The lamb shank was served with the bone in and paired with a butternut squash puree and seasonal vegetables. The lamb was moist and the meat fell off the bone. However, this was quite a heavy dish. We found it hard to finish alone as both the sauce and puree were very thick. 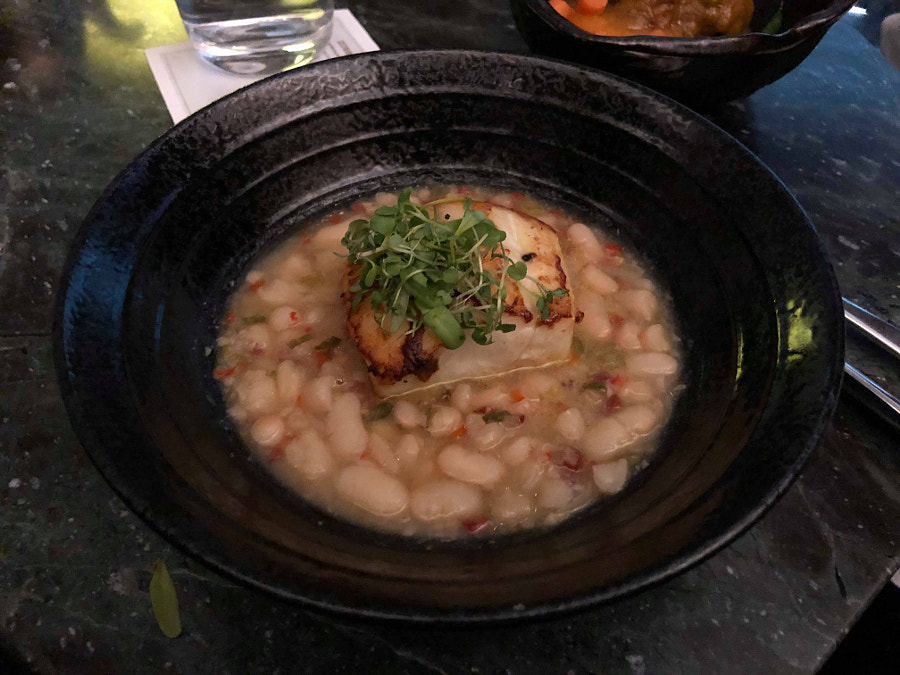 The second entree was the Roasted Lingcod which sat on top of a white bean fricassee, topped with green onion and smoked pancetta. The lingcod was moist and the top was seared to a nice crisp. However, I found the dish to be quite boring and bland. I really needed to eat the fish with the white beans to get some flavour out of it. It was definitely missing something to bring out the flavours. 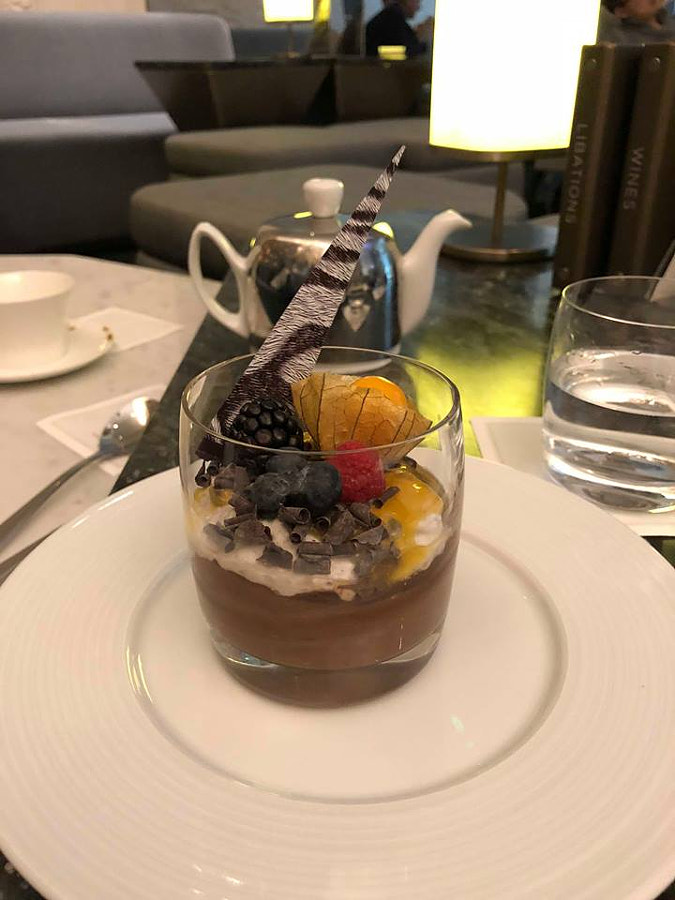 By now, we were actually quite full as the portions were actually very reasonable given this being a more fancy restaurant. For dessert, S got the Chocolate Banana and Passion Fruit Pudding topped with some chocolate shavings. This tasted sort of like banana pudding. Not bad but nothing too special. 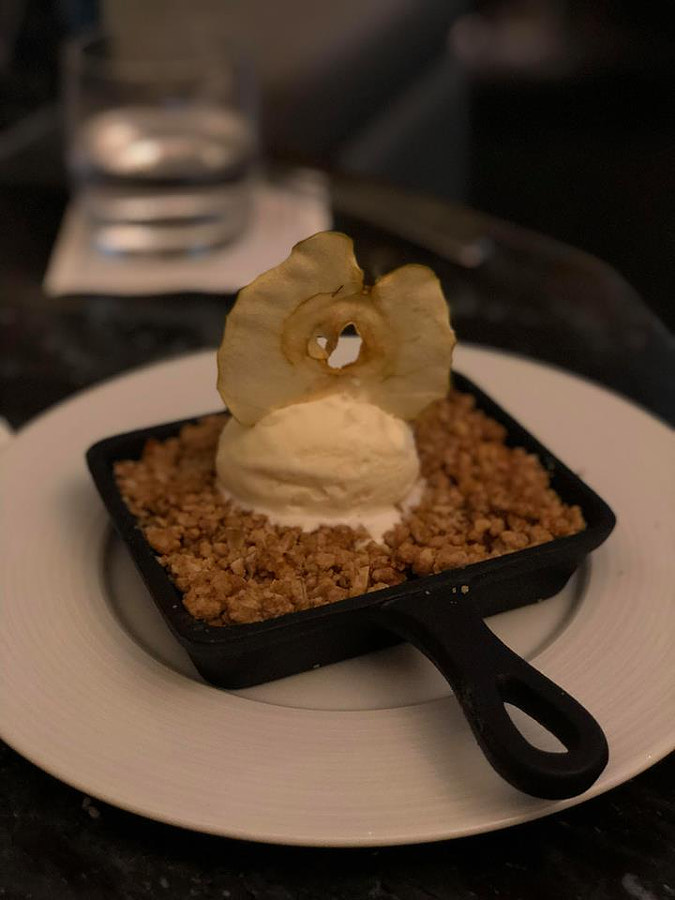 M and I chose the Apple Crumble with Vanilla Ice Cream. For some reason, only one came out and the second came out almost 30 minutes later. I ended up just digging into M’s dessert and was too full to really eat my own in the end. Not sure what happened with the timing there. Anyways, the Apple Crumble was not too sweet, and I always like a good pairing of cold and warm for dessert, so this was great.

Overall, would I come back here for dinner? Probably not as nothing really stood out to me. Plus, the seating is way too uncomfortable for a full on meal. However, I wouldn’t mind coming back for some drinks or light snacks as the ambiance is quite nice. I think their regular menu is not cheap though so dine out is a good option if you’d like to give their food a try. Because this was probably not the most attractive spot given it’s in the Trump tower for obvious reasons, the restaurant was also not fully booked during dine out. Our friend was almost an hour late from work, and the servers didn’t mind us just sitting around and we probably ended up sitting there for almost 3 hours with no issues. Definitely would’ve been kicked out at another restaurant during dine out season!

Pros:
– Ambiance is nice for drinks and snacks

Cons:
– Seating is really uncomfortable with low tables
– Nothing stood out for food