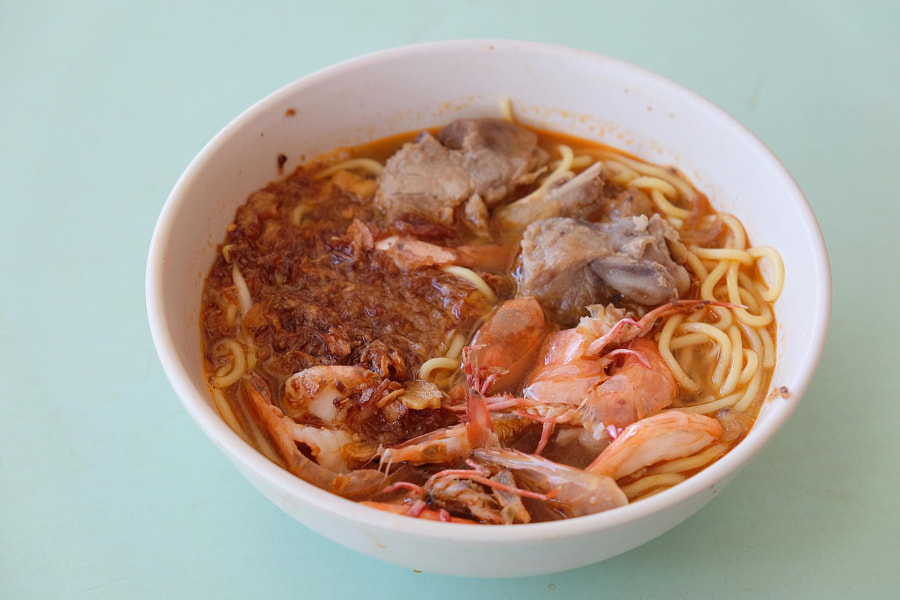 The next morning, we had lunch with S’s relatives and they took us to the Old Airport Road Food Centre. This is one of the largest hawker centres with over 100 stalls! Luckily, we had locals to recommend us spots so we didn’t need to be so overwhelmed. We got the famous Prawn and Pork Rib Noodles from Albert Street Prawn Noodles. Although there were prawn shells still in the bowl, I liked how they had cut the prawn open already so deshelling the prawn was easy. The soup is rich in prawn flavour and therefore has a reddish hue. Noodles were nice and chewy. I recommend trying this at this hawker centre! 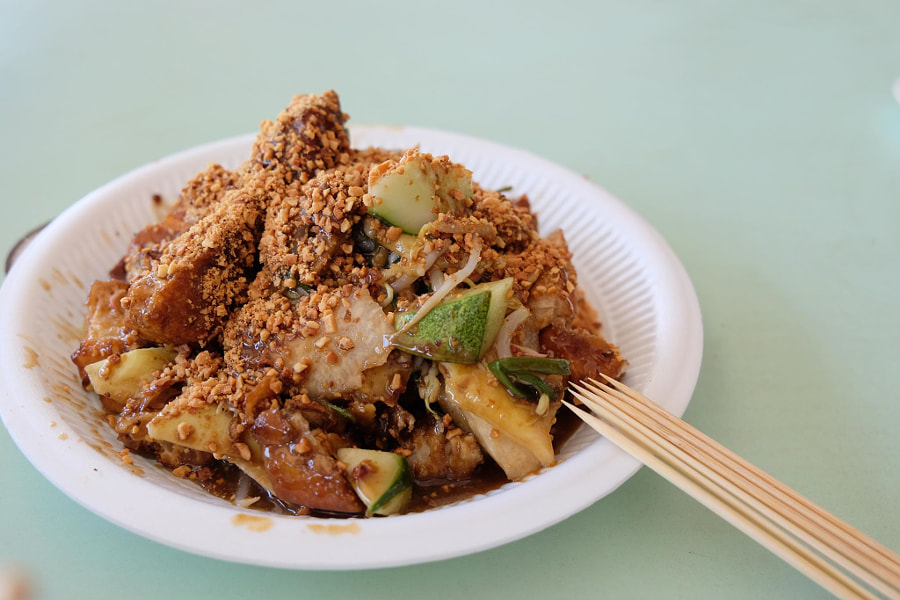 We also share some Rojak from Toa Payoh Rojak. Rojak is a fruit and vegetable salad with a sticky sweet and sour sauce. There were pineapples, cucumbers, crushed peanuts and freshly toasted chinese donuts and tofu puffs in this one. The locals seemed to be a fan of this, but I personally still don’t crave for it. Worth giving a try if you’ve never had it though! 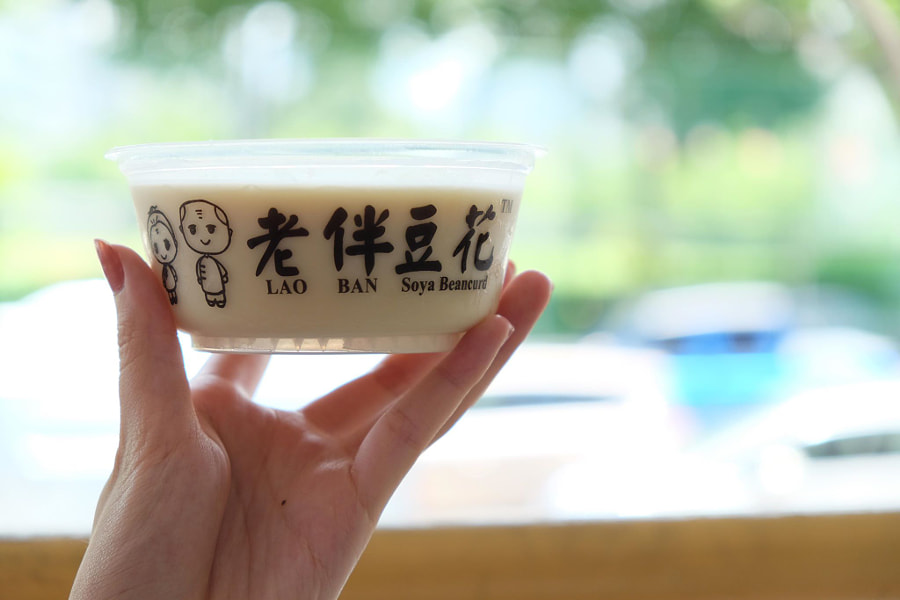 For dessert we had tofu pudding from Lao Ban Soya Beancurd. This was the perfect dessert on such a hot humid day! The refreshing tofu pudding was silky smooth! 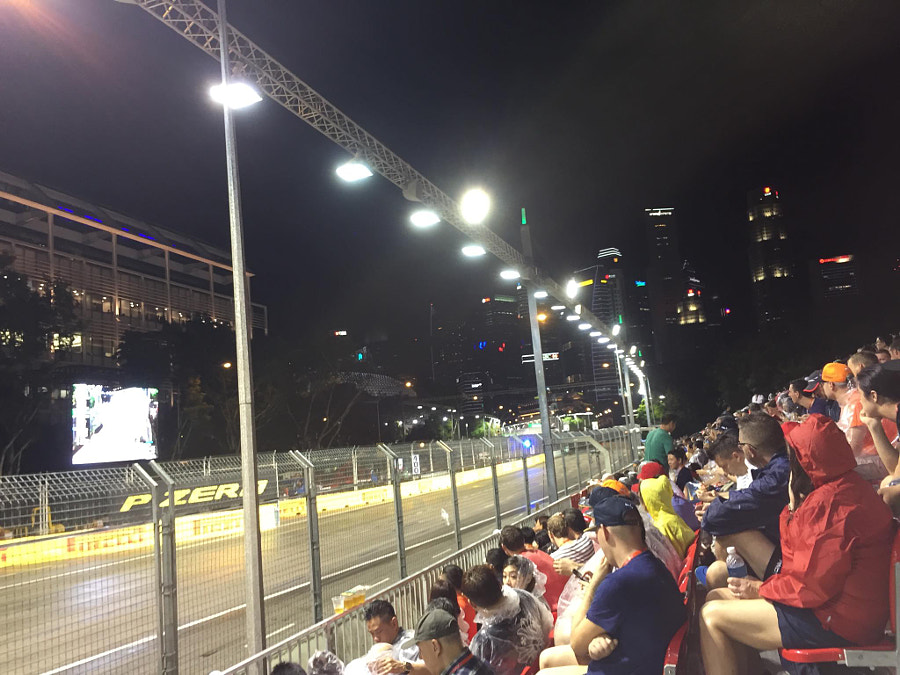 After lunch, we hung out with the cousins for a bit and eventually made our way to the last day of Formula 1! Unfortunately, the evening was full of rain and we ended up having to hide in the Esplanade most of the afternoon as monsoon rain is no joke in Singapore! When it rains, it pours! Eventually, we had to buy a poncho at the race grounds, so I suggest packing your own to save a bit. Because of the rain, we kept our cameras and phones away most of the day and didn’t capture too many pictures. However, before the final race, you should check out the parade where the racers come around the race track in vintage cars to say hello. Finally, the race happened, but due to the slippery track from the rain, the beginning of the race was quite a show with many racers colliding early on! The rain definitely made the race a lot more exciting for the crowd despite sitting on the benches with our raincoats. Mercedes’s Lewis Hamilton ended up winning the 2017 Singapore race! And of course, the rain cleared for the festivities later that night including celebration fireworks and shows by Chainsmokers and Calvin Harris. A great way to end the race! 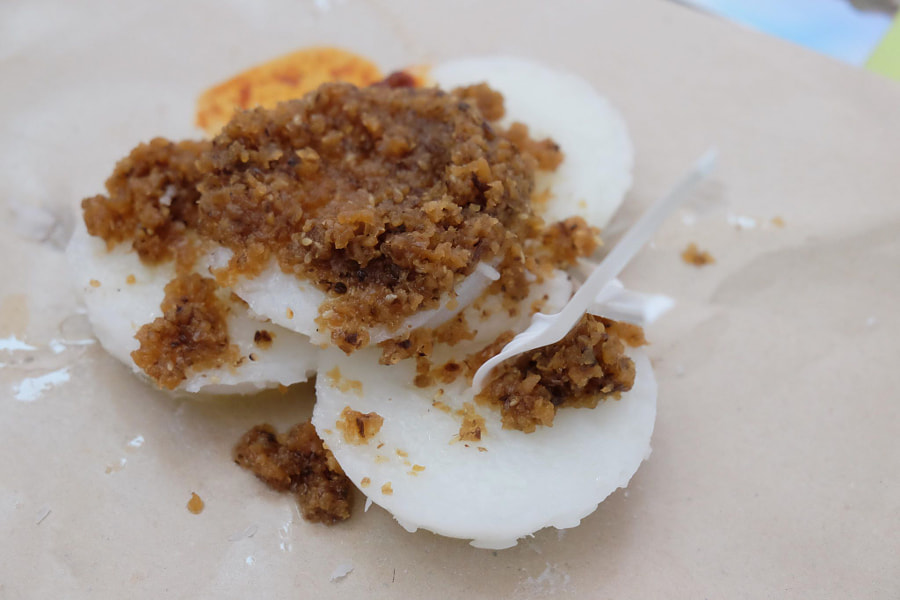 The next day, we had a pretty chill day since we were done the races and didn’t have much on our agenda. Given we had already visited Singapore before, we were really just looking to revisit some favourite spots and possibly finding some new ones along the way. But first thing first, we had to get some lunch! S’s aunt took us to Clementi Market and Hawker Centre which seemed like a popular local spot. The aunt bought us some chwee kueh from Bedok Chwee Kueh. It is a steamed rice cake with preserved turnip. Unfortunately, I’m still not a big fan of chwee kueh as I find the cake itself quite bland and flavours of the preserved turnip aren’t personally my favourite. 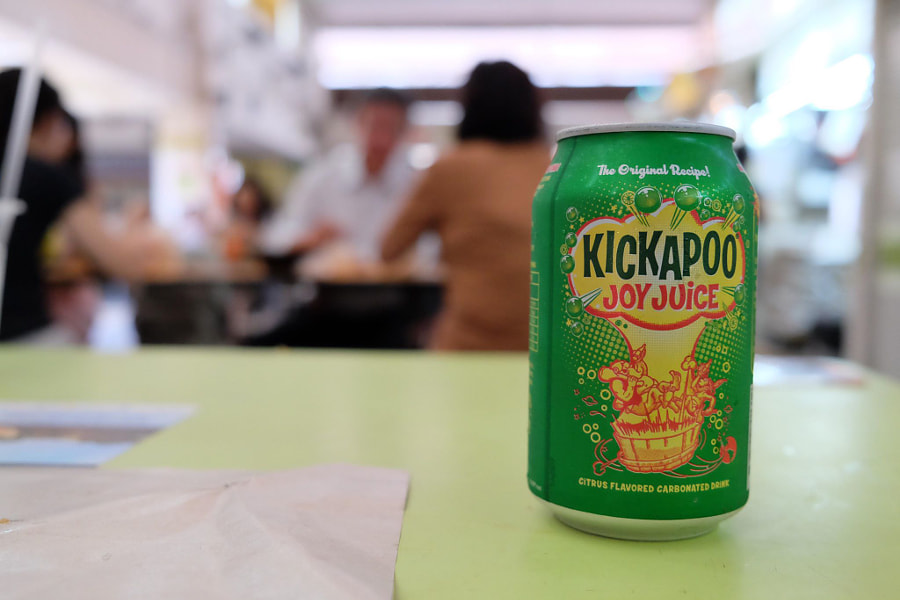 S got his usual Kickapoo Joy Juice which has such an odd name. It’s essentially like Mountain Dew. Not sure why I’ve never seen it in Canada, but it’s quite popular here. 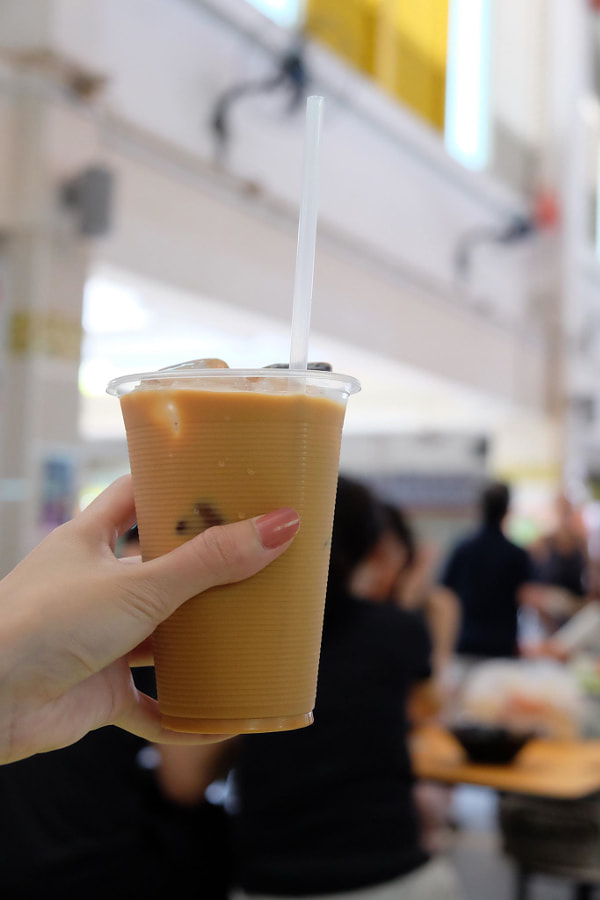 For myself, I got an iced teh tarik. Can’t go to Singapore without enjoying one of these milk teas! 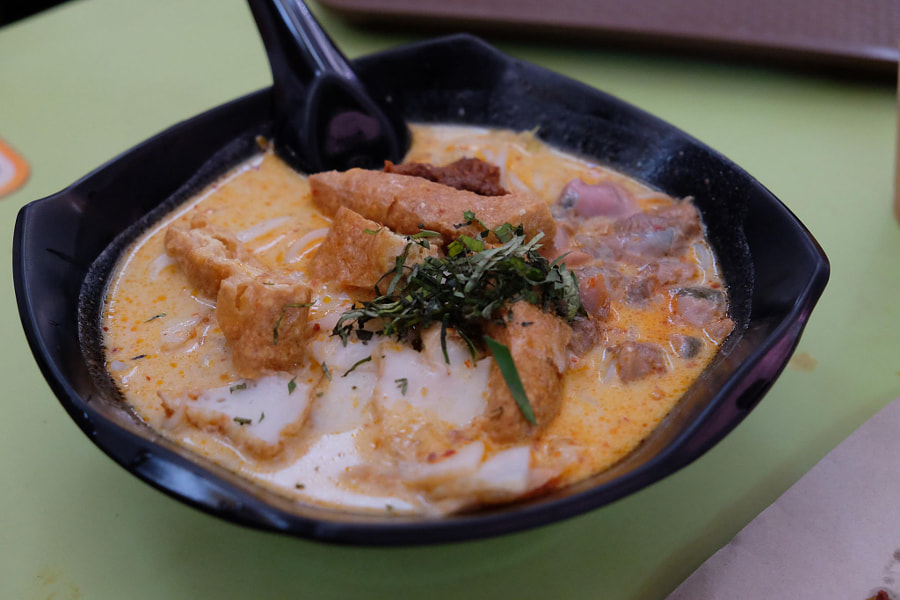 I was craving Laksa so the aunt helped me find a stall called Hong Kee Satay Bee Hoon which sold a variety of noodles. This one has fish cake, tofu puffs and cockles. The soup was creamy with a slight coconut flavour and wasn’t too spicy. The thick slippery noodles soaked up the broth. I’ve had laksa a few times in Singapore now and I’ve learned they love to add cockles in it, which I’m still not a huge fan of. They taste sort of like clams, but I find them a lot slimier and very fishy. 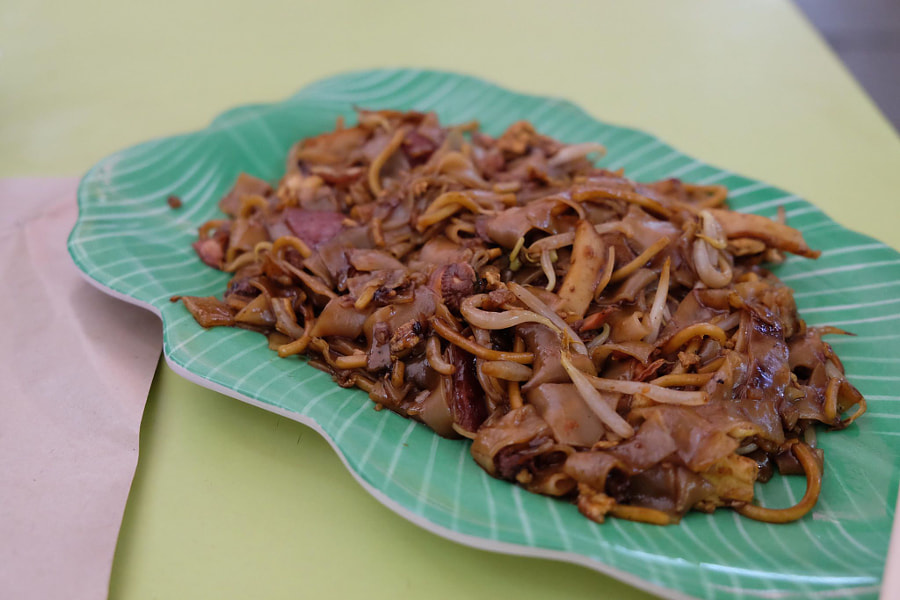 Of course S got his favourite Char Kway Teow. I thought this one was mediocre compared to the one from Maxwell Food Centre. It was a bit more dry and not as flavourful. 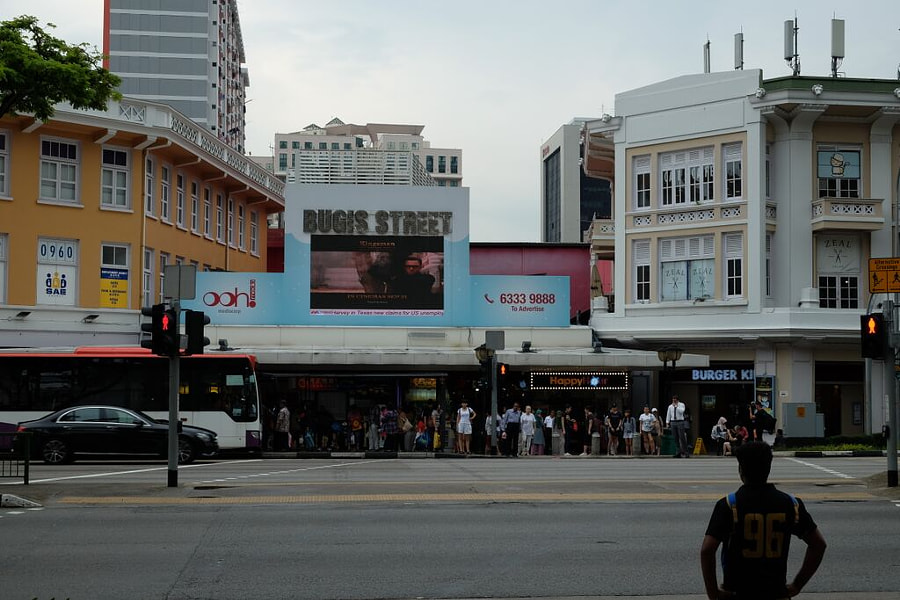 After lunch, we did some errands with the family and then they dropped us off at Bugis Street. We had been here before and even though it’s a tourist spot with just random knick knacks, I remember it being pretty fun to wander the crowded area. 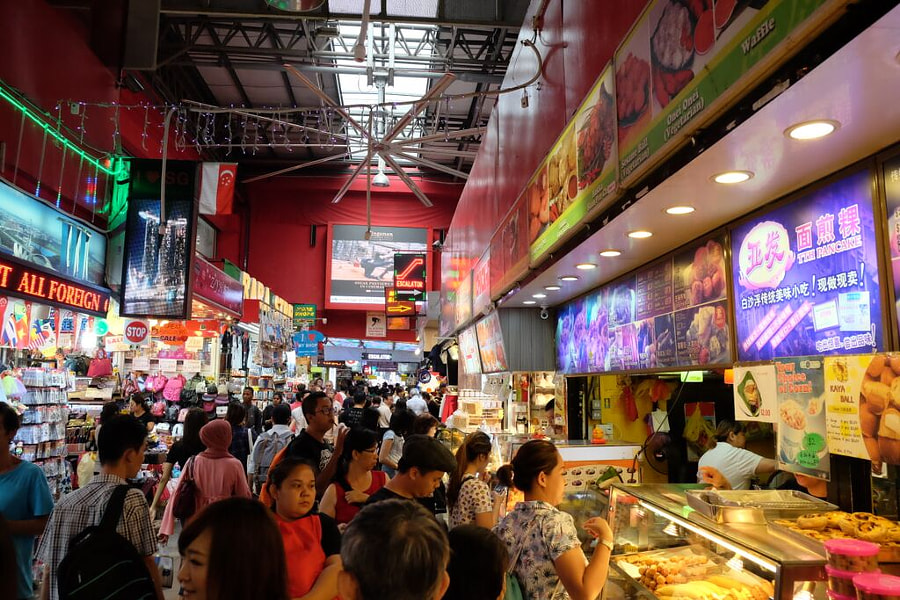 The place is packed and you can find everything from cheap watches to snacks. My favourite spot is to go upstairs for some young women’s fashion! They have lots of Korean style clothing upstairs for affordable prices. 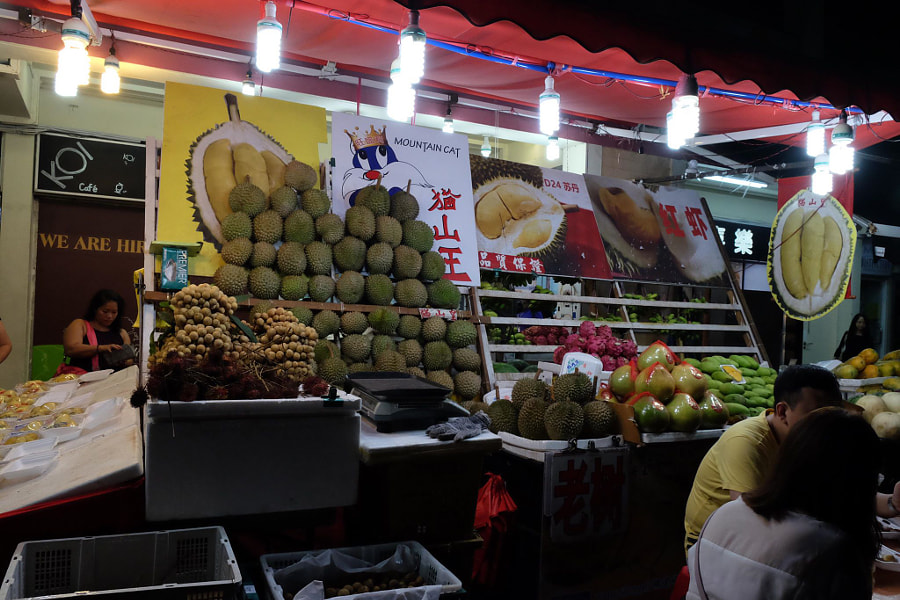 A trip to Singapore also means trying some Durian! I can’t remember this stall’s name but you can find durian stalls all over the city. Many of them can cut open the durian for you on the spot with quite a few allowing you to eat at the spot as well. 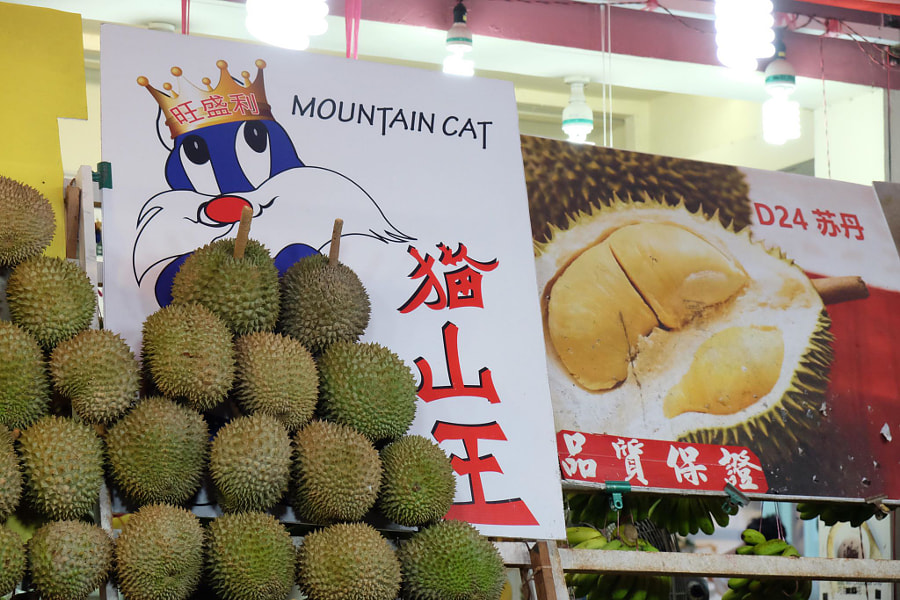 This location sells Mountain Cat, D24 among other varieties. 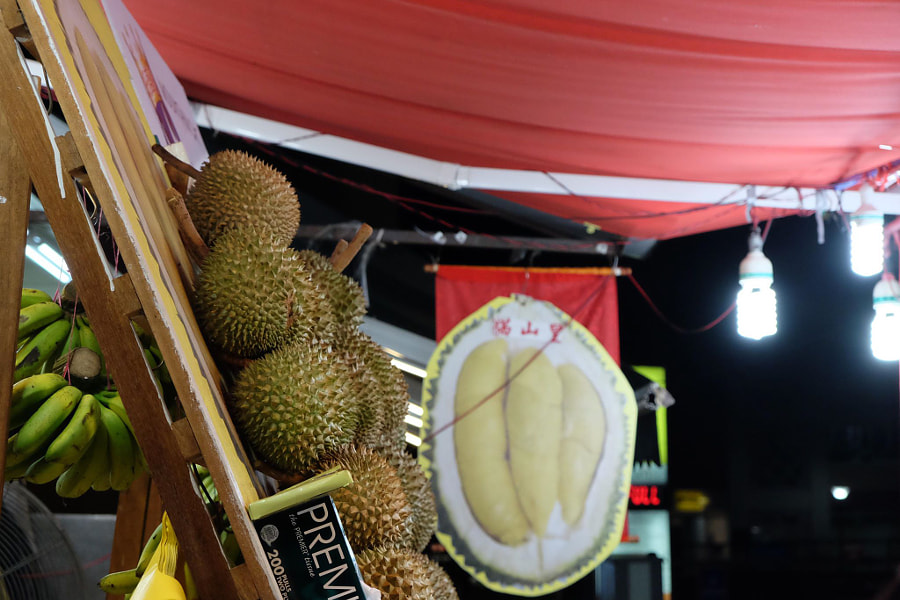 Mountain Cat is known to be one of the best variety and is also very expensive. 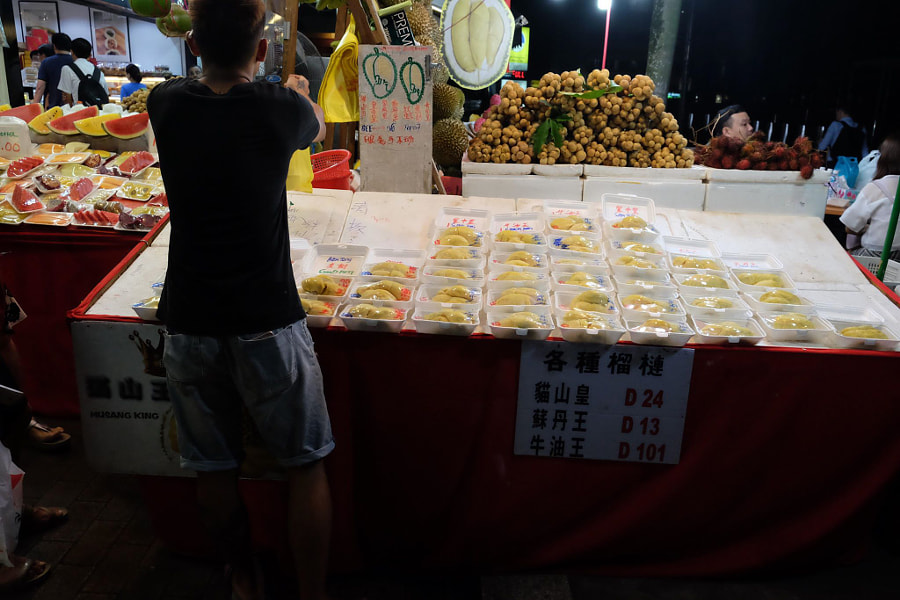 We bought some home to try, but we ended up not enjoying the Mountain Cat as much. It has a bitter aftertaste sort of like alcohol. We prefer the sweet durian from Thailand instead which happens to also be cheaper! 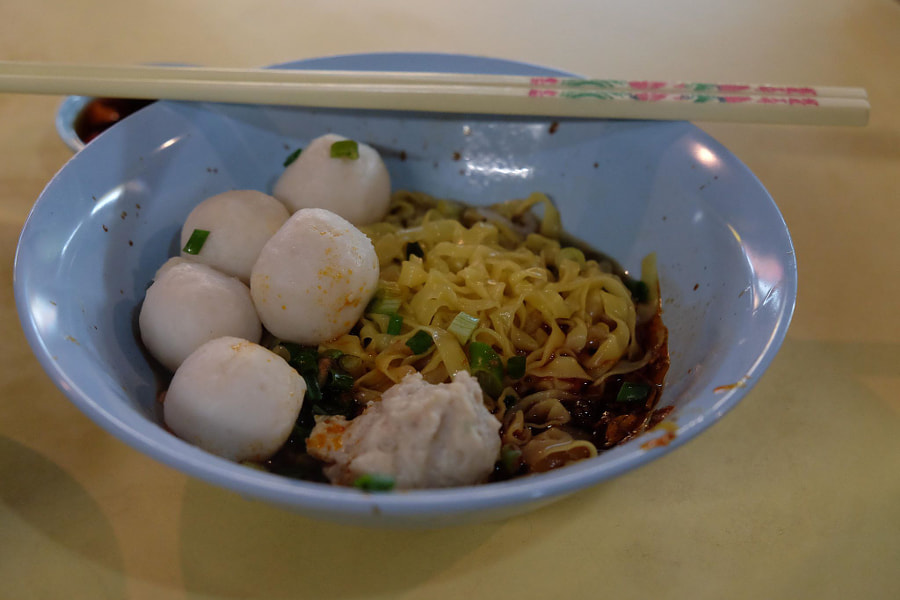 For dinner, the family took us to Toa Payoh Lorong 8 Market & Food Centre. For myself, I got the Dry Fishball Noodles from Song Kee Fishball Noodles and opted for mee pok which is the thicker strand of noodles. The egg noodle was al dente and it was mixed with a chili sauce. Quite delicious! 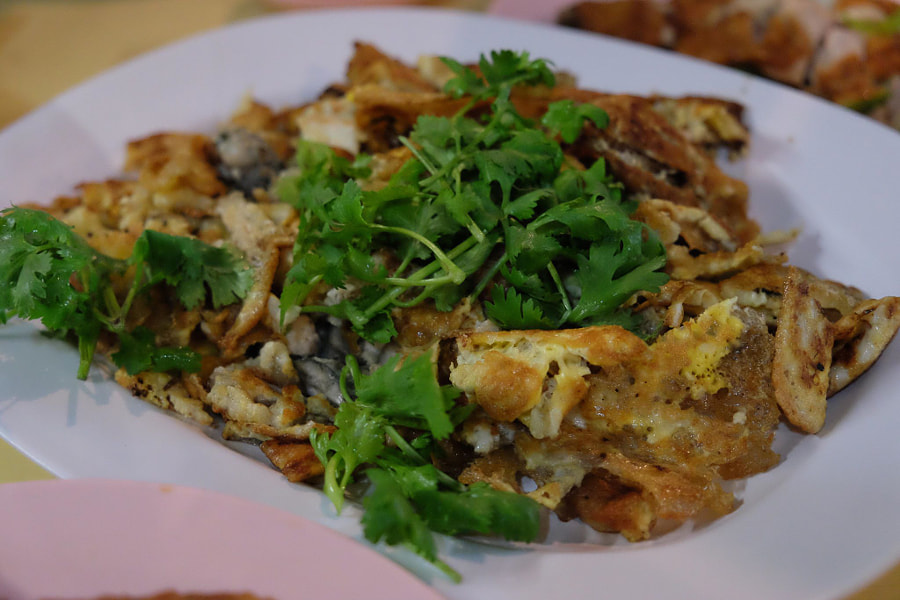 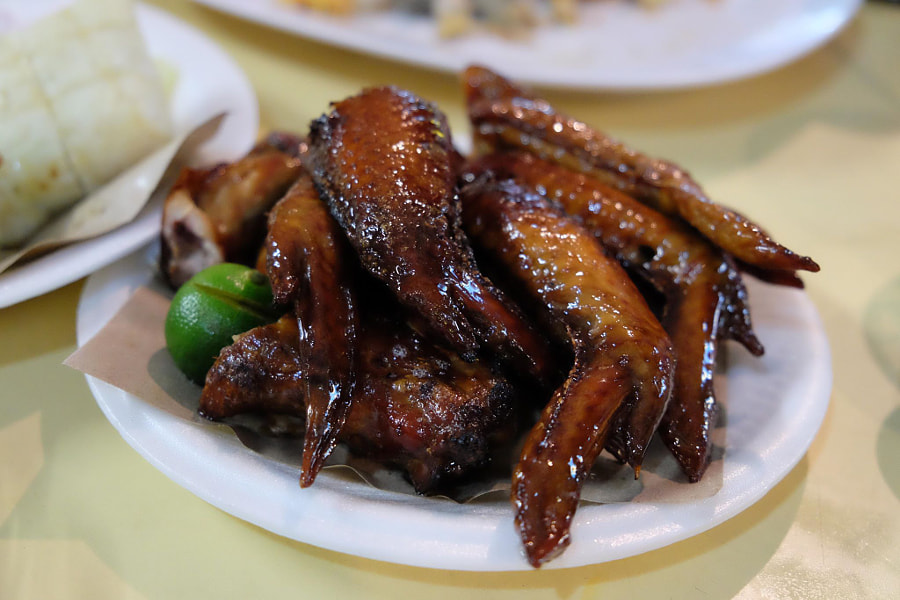 If you love chicken wings, then be sure to try the BBQ Chicken Wings from Sheng Pin Xiang. The sweet soy flavour was just right and the chicken itself was moist while the skin was crispy. 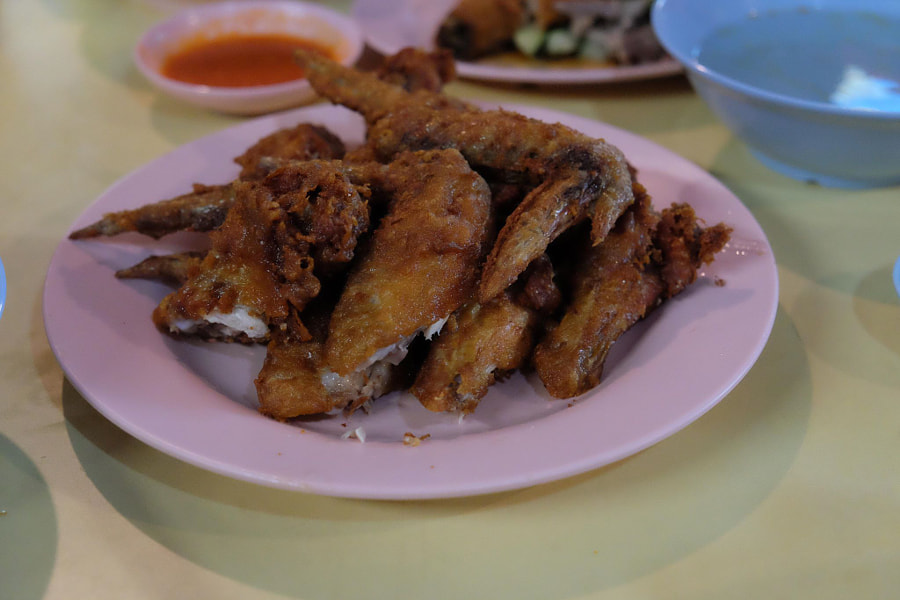 We also tried the Deep Fried Chicken Wings from Da Ji Hainanese Chicken Rice. The skin was very crispy, but I still preferred the BBQ Chicken Wings as the flavour was just right! 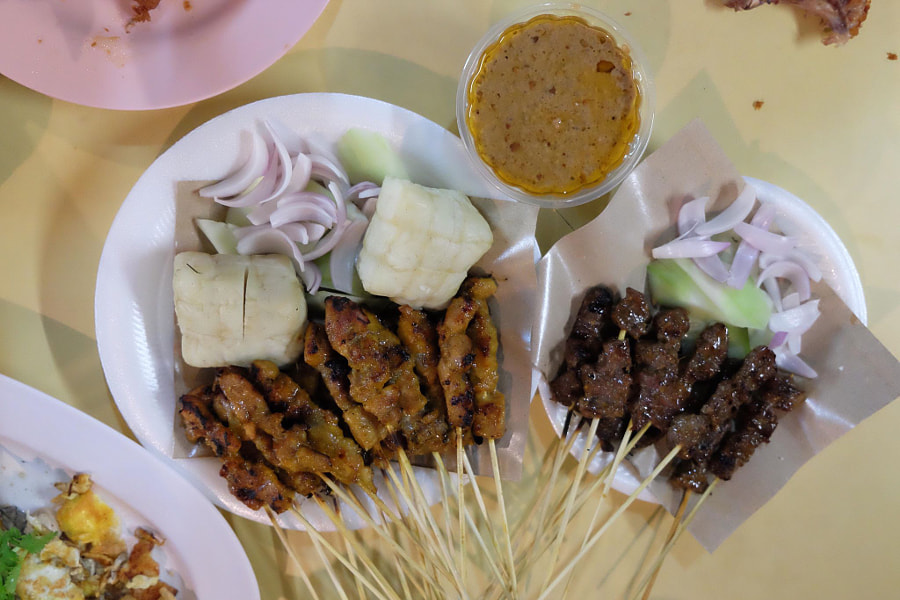 I love eating at Hawker Centres because you can order a variety of food and share it with everyone. Fortunately, we had enough people for dinner, so we also ordered some satay from Fang Yuan Satay. We had both the Chicken Satay and Beef Satay which are served with a warm peanut satay sauce and some pressed rice cakes. The satay were moist and flavourful and I prefered the chicken over the beef. 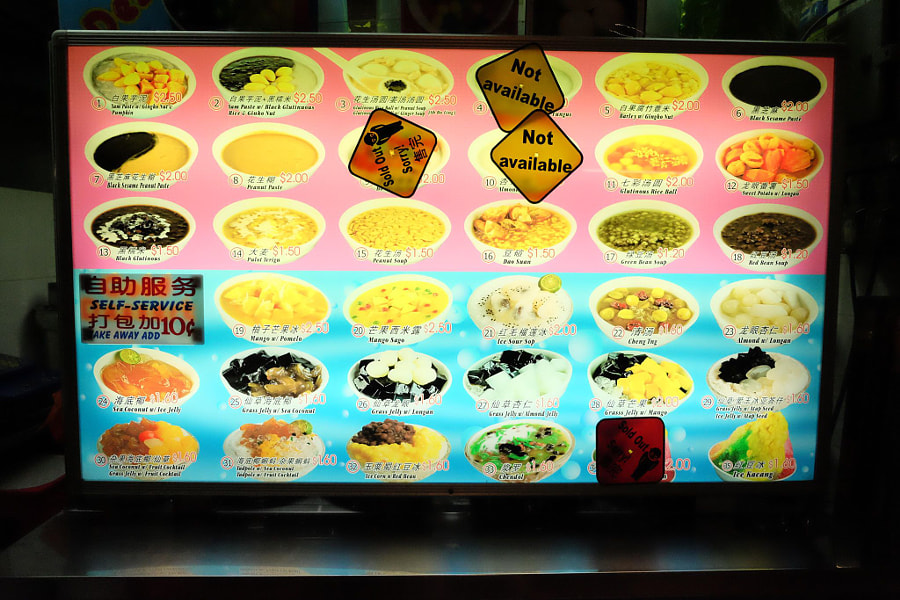 To end our feast, we had some Singaporean desserts. I don’t remember the name of this stall, but they had a large variety of cold and hot desserts. 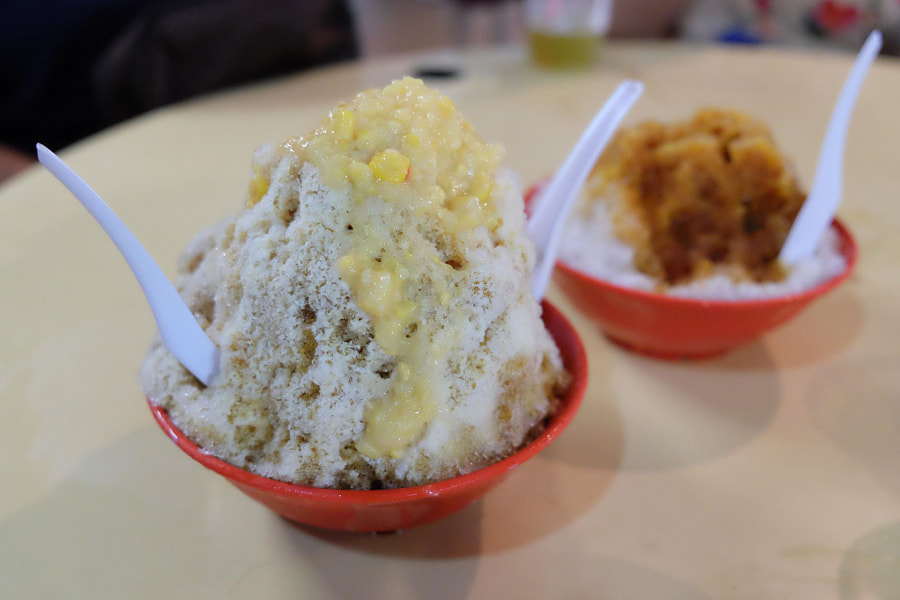 We had some shaved ice with gingko beans and brown sugar syrup. I wasn’t a huge fan of the beans on top though and I still prefer the Korean or Taiwanese style shaved ice. 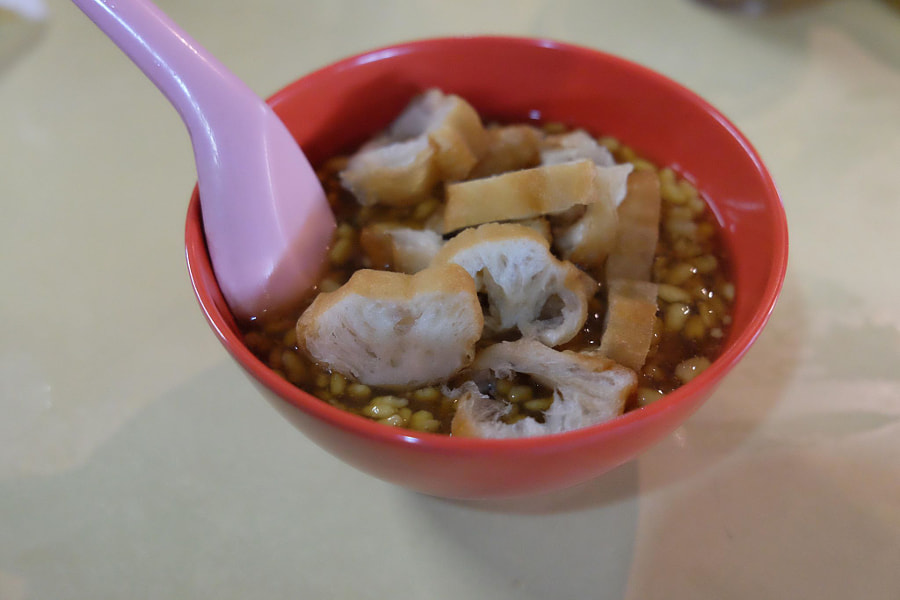 The aunts also wanted me to try Dao Suan which is a sweet mung bean soup which has a thick syrup and topped with Chinese donuts. It was interesting, but not my type of dessert.

Overall, a great hawker centre with a large variety of desserts!