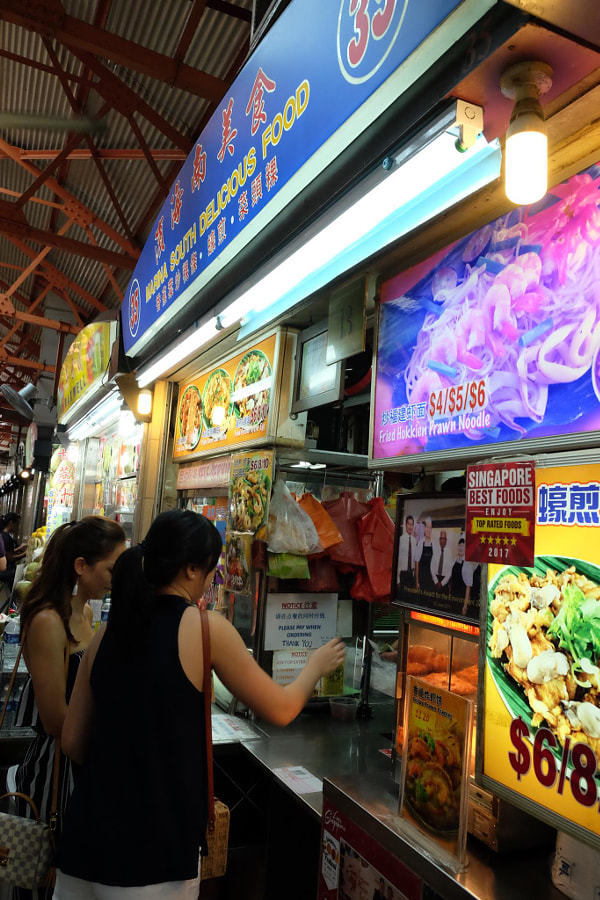 The next morning we headed to Chinatown for lunch before Day 2 of Formula 1. We had a great time at Maxwell Food Centre the last time we visited, so decided to check out what other stalls there are. The famous Tian Tian Hainanese Chicken stall had way too long of a line up this time so we decided to try Marina South Delicious Food 滨海南美食. They are famous for their Char Kway Teow here. 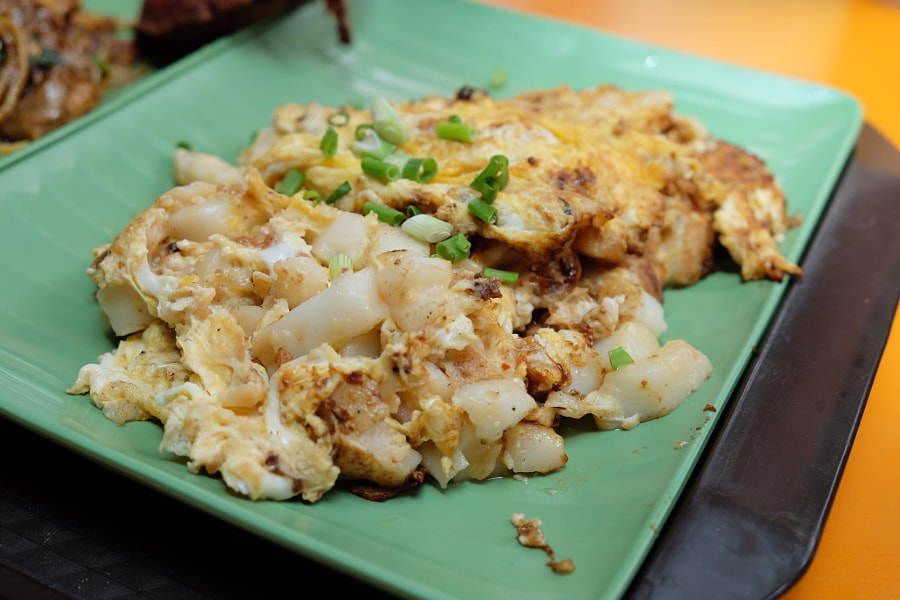 Another dish they have is the Fried Carrot Cake. This is quite different from the ones we get at Dim Sum. The Singaporean style carrot cake is mixed with eggs and served almost like an omelette. The turnip is cut into diced pieces. Super smooth and full of wok hay and flavour. Quite enjoyed this! 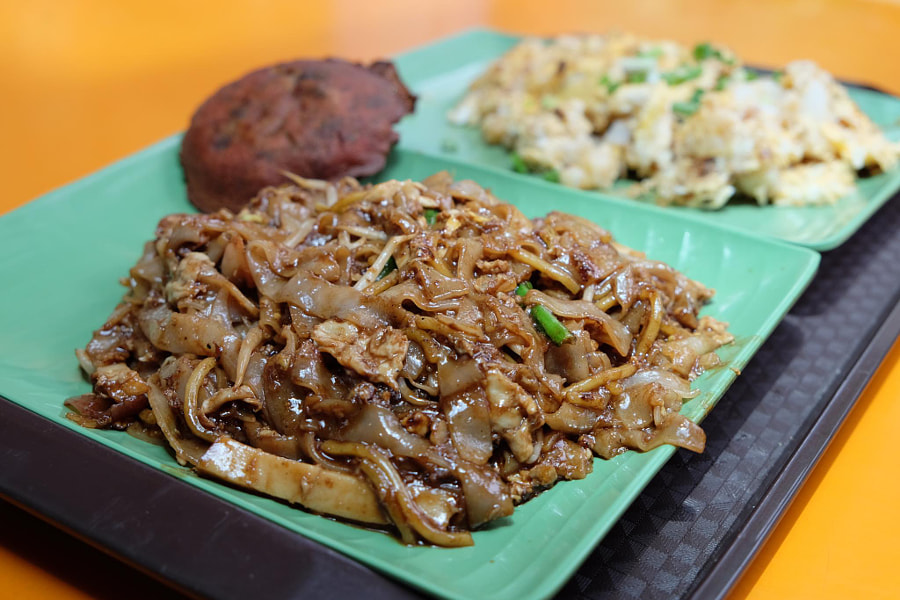 We also got the Char Kway Teow which was fantastic. Glistening in oil, but packed full of flavour and wok hay again. The noodles were evening coated and the Chinese sausage was pungent but tasty. We got large sizes for both of these dishes as we thought they wouldn’t be too big, but they were more than enough for two. I also decided to order a Deep Fried Fuzhou Oyster Cake from the nearby stall called Maxwell Fuzhou Oyster Cake. It’s the one pictured above balancing between the two plates. I’ve never seen an oyster cake like this. Inside, it’s piping hot with a mixture of oyster and minced pork. Apparently this traditional snack is barely seen anymore so be sure to try it next time you’re at Maxwell! 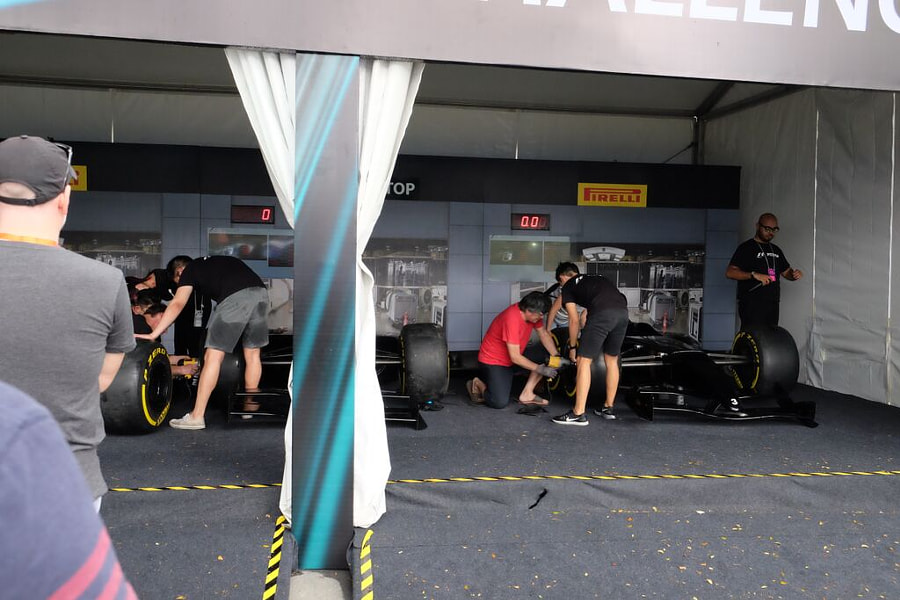 After our bellies were full, we headed off to Day 2 of the Formula 1 race. As the afternoon generally consists of practice or other non-Formula 1 races, we decided to check out some of the other entertainment offered during the day. One of our favourites and probably the coolest experience was changing the tires of an F1 car. Of course this is just a model, but it’s cool to see how the tires are removed and new ones placed on. 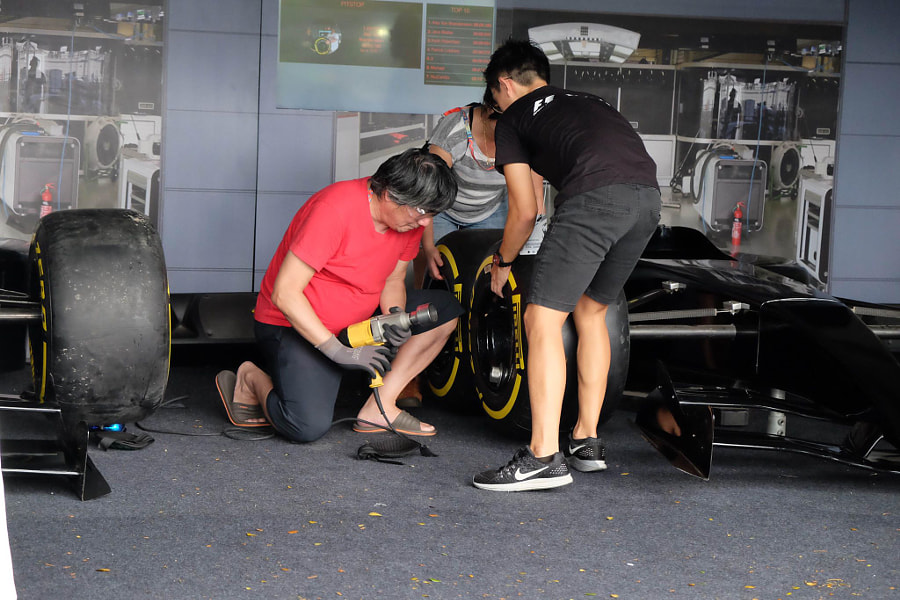 We both got to take part in the challenge and raced against other competitors to change the tires as fast as we could. Of course, we needed a lot more practice! 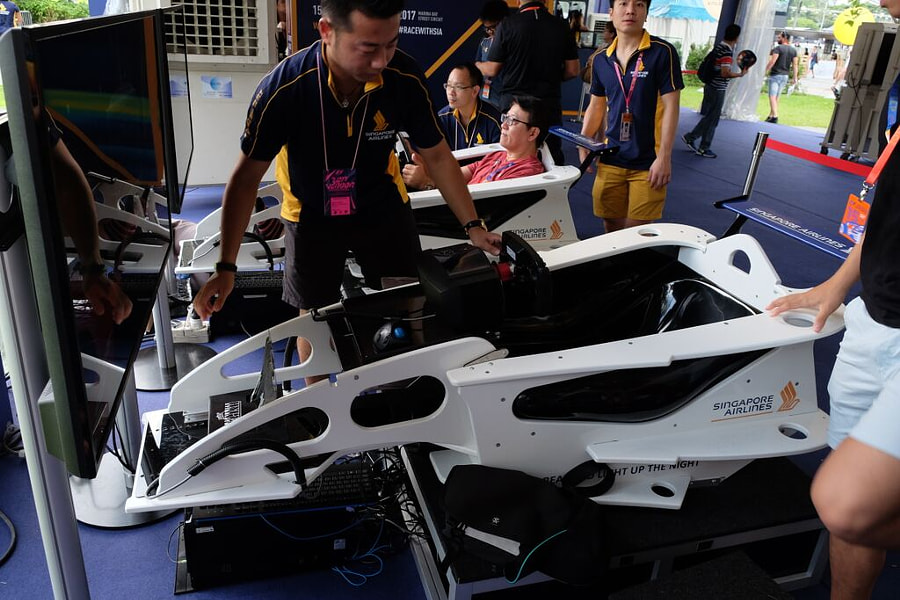 You can also choose to drive a F1 simulator car. I believe the race car size is supposed to be similar to the real car. So quite tight and you are almost lying down when you sit in it. 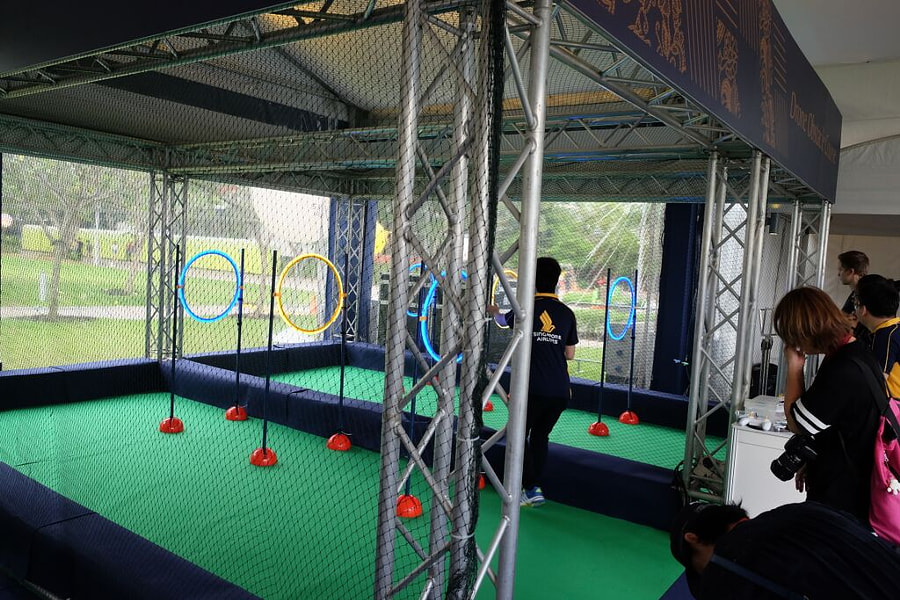 Some other entertainment included flying the drones through an obstacle, but this seemed to be a bit faulty at times. Singapore Airlines is also a huge sponsor of the event, so be sure to check out many of their booths. Be sure to grab one of those plastic fans! You will thank me later! 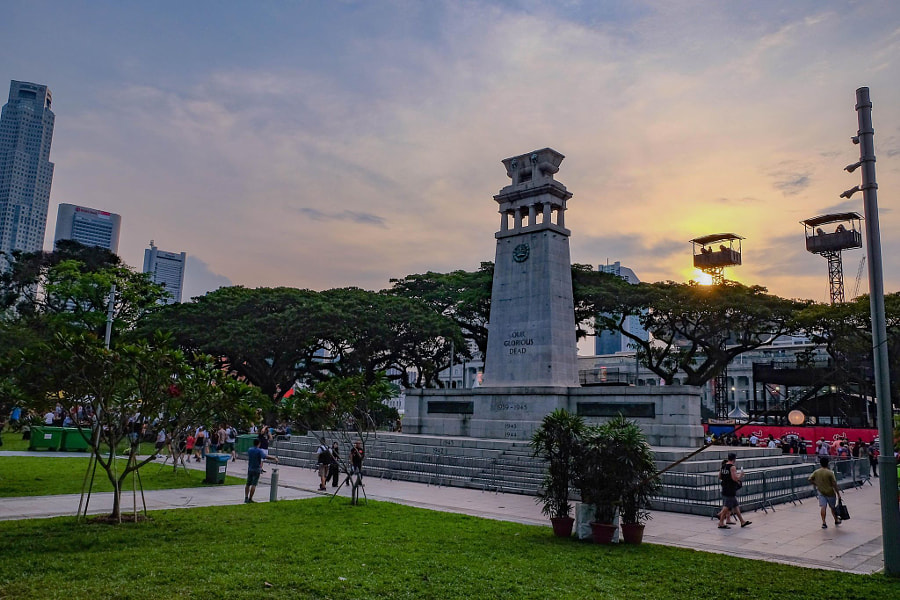 We also wandered the whole area including the Civilian War Memorial which is close to our entrance to our grandstands. 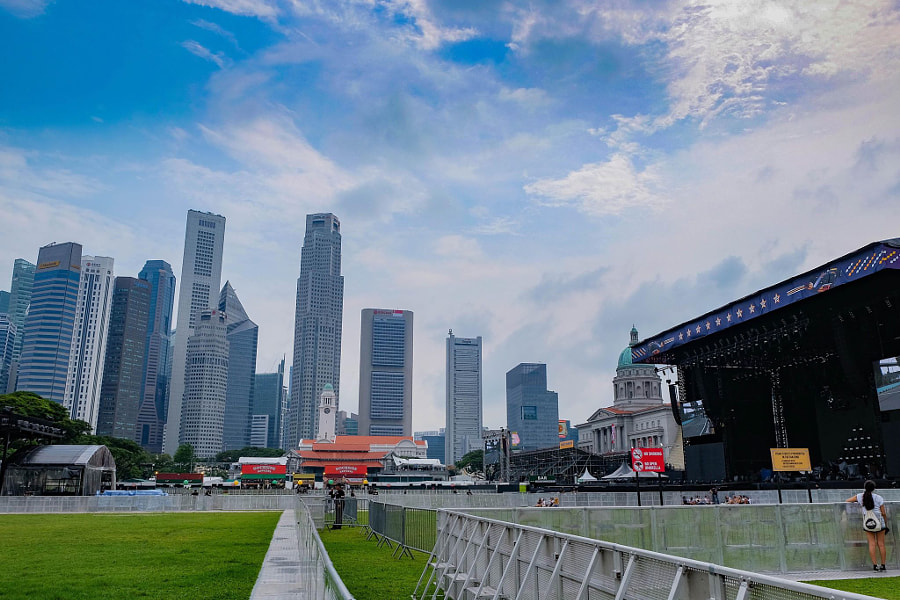 This is the concert area. As you can see, you get a beautiful view of the city skyline as well. Really cool how the race is in the middle of the city! 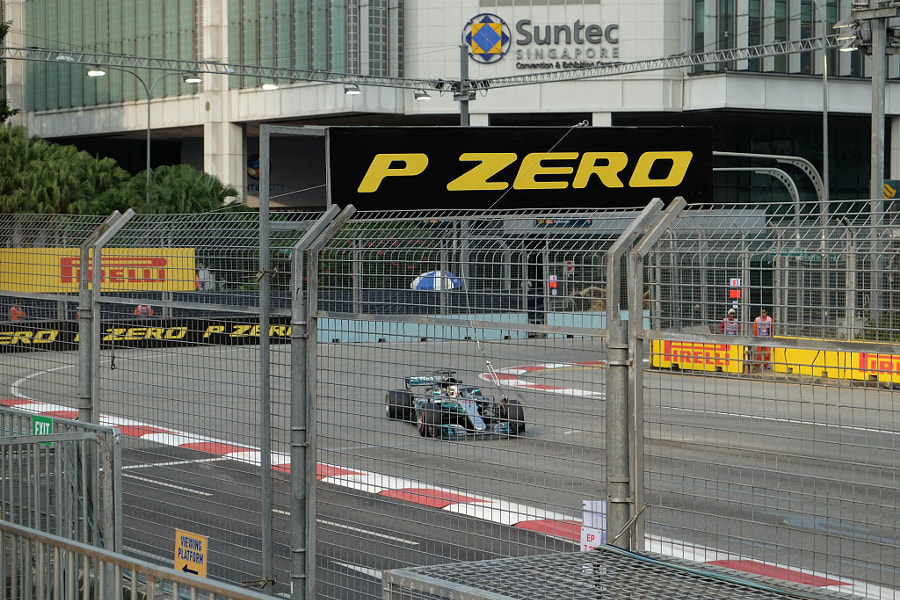 Then we watched another one of their practice rounds which happened in the afternoon. The qualifying race would happen in the evening on Day 2. As you can see, at our Stamford Grandstands, we can see the race cars coming at this turn. As expected, because of the high speed and sharp turn, we witnessed a few crashes on the actual race day. Luckily, everyone got out okay! 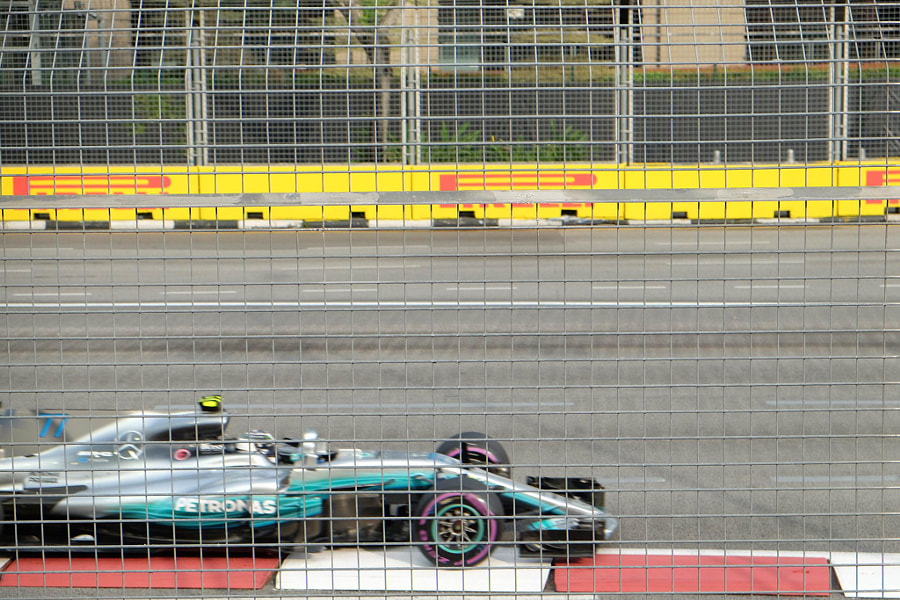 The race cars go by so quickly it’s hard to get a picture! Shutter speed needs to be at max! I also highly suggest wearing ear plugs as the cars are extremely noisy and damaging to your ears. Even with the ear plugs, you can hear the noise. 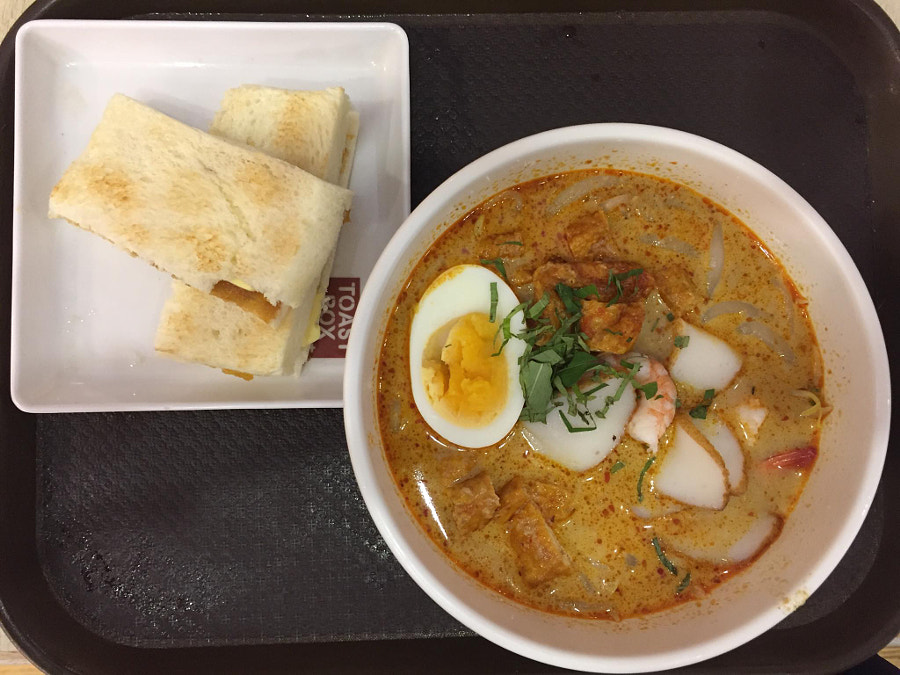 As it ended up drizzling that evening, we grabbed a quick bite at nearby Toast Box as we simply did not want to look for food. However, the food was quite average. The Kaya Toast is not as good as Ya Kun’s. The toast is not as crispy, and the portion size is way smaller. I decided to get the Laksa, and as expected, it was quite average. Think of it as fast food, so really can’t expect much.

We headed back to watch qualifying that evening, and stopped by to catch Ariana Grande’s concert after. As we had recently watched her concert in Vancouver, we decided to just call it a night and left early to get a good night’s sleep! Day 2 of the Singapore Grand Prix done!