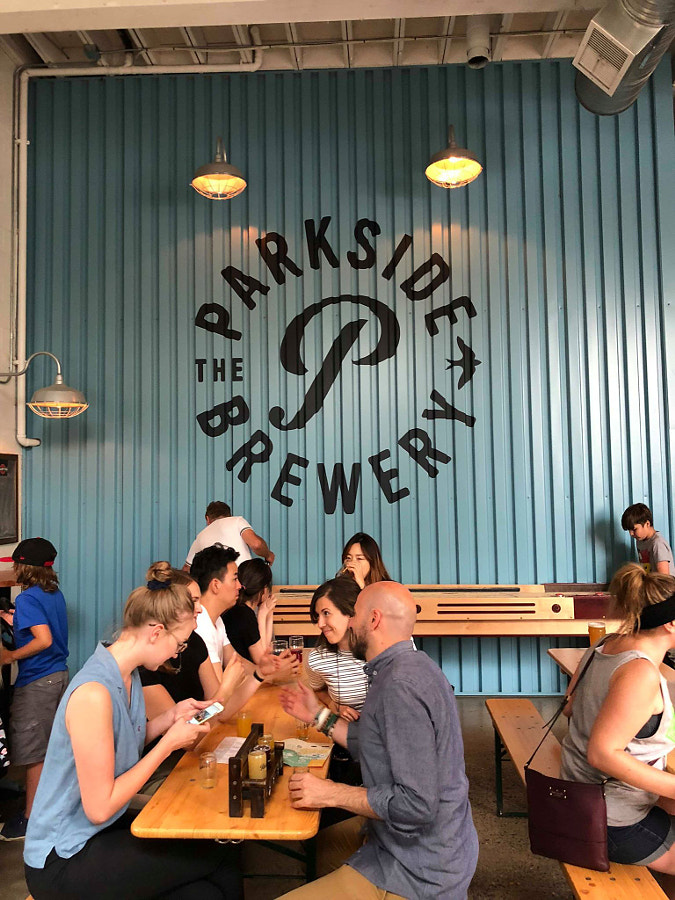 During my visit to Port Moody for sushi, the guys wanted to check out some of the breweries since there is a street filled with them. We decided to check out Parkside Brewery which has both a patio and indoor seating. 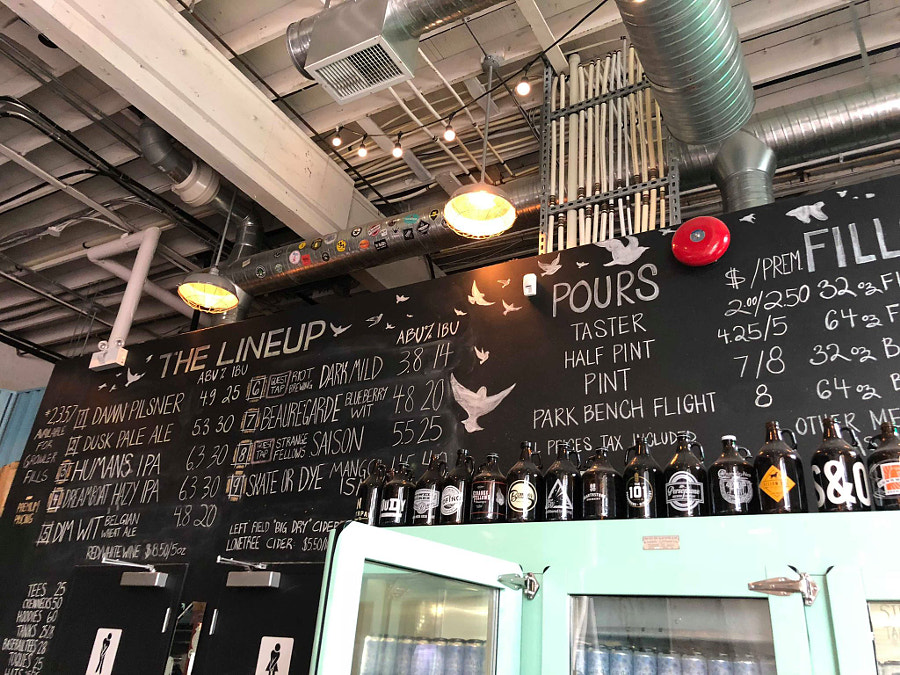 Parkside has their own beers but also features a few guest taps which is nice. They not only list the alcohol content but also the IBU or International Bitterness Units scale which I much appreciated since I don’t like bitter beers. You first choose and pay for your beers and then you can bring your beers to any open seating you find. 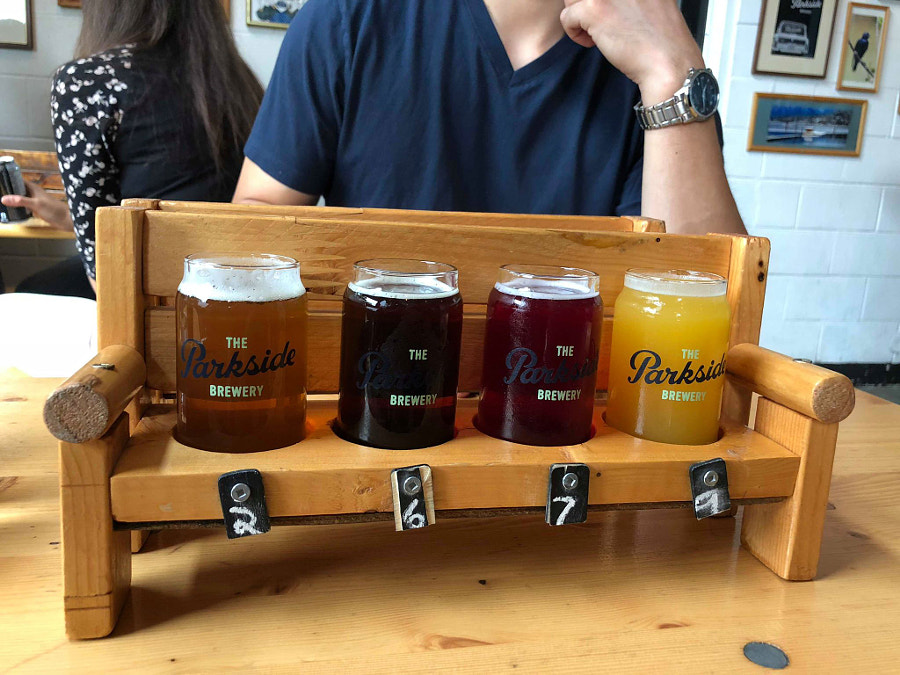 I decided to share a Park Bench Flight with M since I only wanted to have two beers. The two beers I tried were both fruity and I especially enjoyed the Skate or Dye Mango ISA as it had a passionfruit aftertaste. I felt that the Blueberry Wit didn’t have enough blueberry flavour compared to the mango ISA. For $8 a flight, the price was quite comparable to the other breweries in the area. I loved how they were put on a little wooden bench! 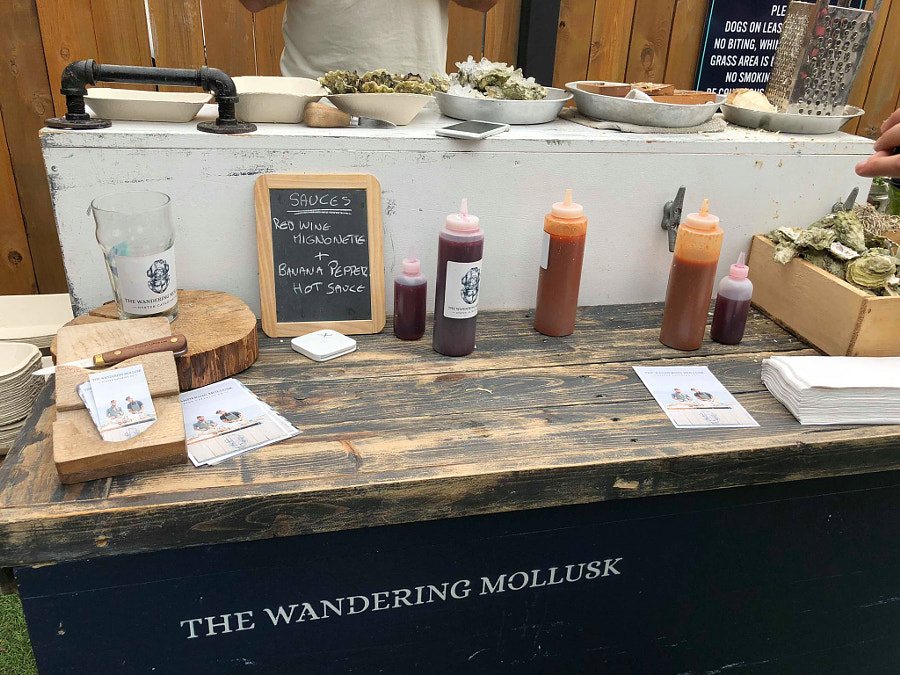 The cool thing about the area is that most of the breweries have teamed up with food trucks to offer food to pair along with the beers. At the Parkside Brewery, they had The Frying Pan dishing up their signature fried chicken sandwiches, but since we were heading to sushi after, we decided to check out The Wandering Mollusk instead. They were serving up some oysters and I wish we had some wine to go with these! Love the idea of collaborating with food trucks!

Cons:
– Can get quite busy so seating can be difficult to find for larger groups

After meeting up with the whole crew, including the friends from Manchester, we set off to go to the Heineken Experience, which is a tour of the Heineken brewery. If you’re living at a hotel or hostel, a tip would be to check if they have any discount vouchers since you’re likely to get a few dollars off. I believe we got it for around 16 euros. When you arrive, you receive complimentary coat check. Then you proceed to turn in your ticket and you get a wristband in return with 2 beer tokens and a free gift token.

It’s a self guided tour and they estimate it takes around 1.5 hours to get through the whole tour. The beginning includes a lot of history of how the company came together and the different branding and marketing strategies they used throughout time.

Honestly, I didn’t think the history section was too interesting. It was sort of like going to a museum and we had to read everything off the plaques, so we skimmed through it quite quickly.

Then we got to some things that were a little more interesting. They had a worker explain to us the process of how beer is made. 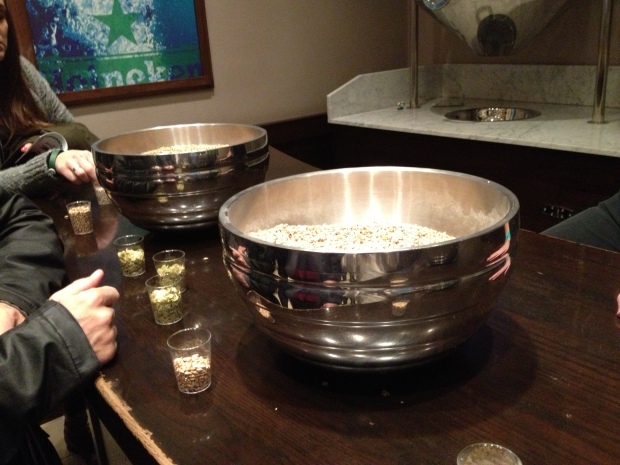 You got to try some of the hops and barley. Hops definitely did not taste that great… 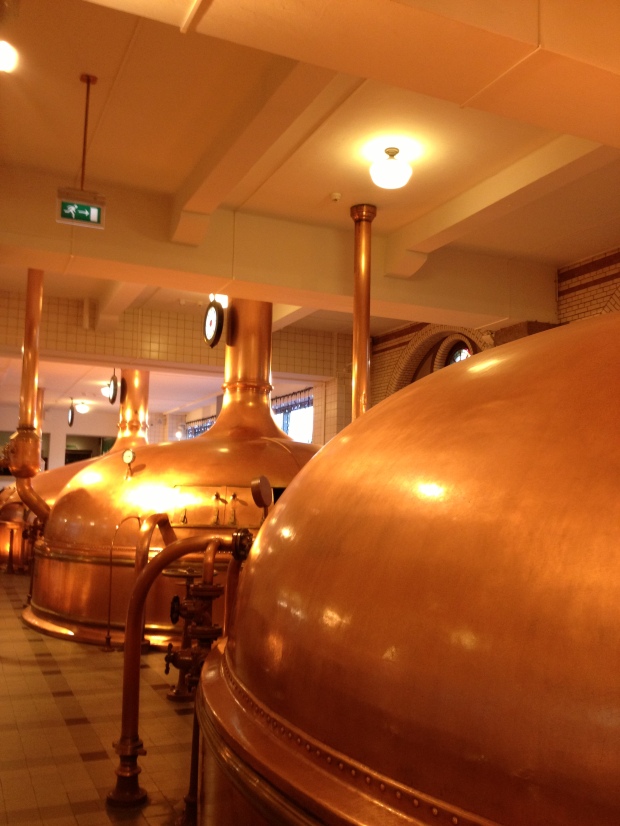 Then you arrive at the Brew Room. You can’t really see what’s going on, so it’s more like getting a big picture of how it would be produced. 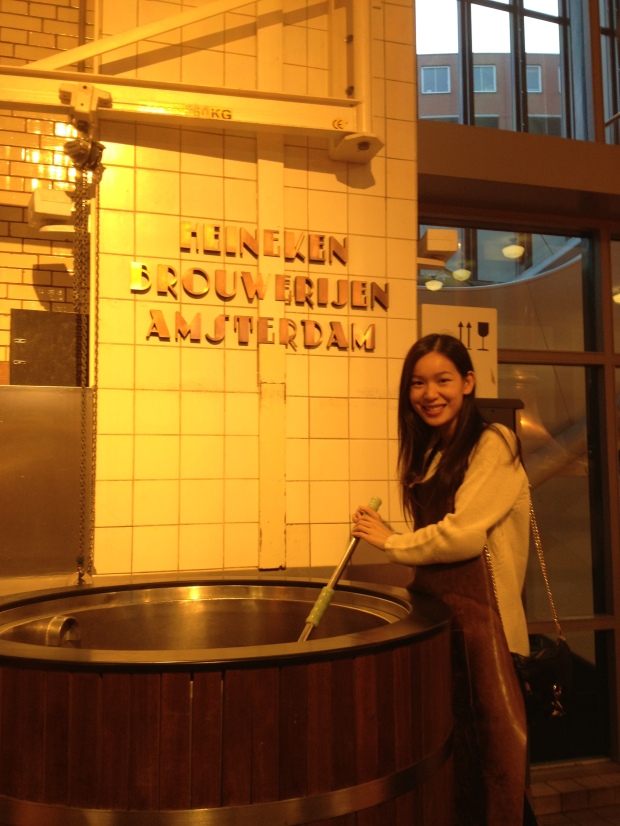 You can get a mandatory picture of yourself brewing in that brown leather apron too!

Then, you’ll find yourself in the stable walk with tons of horses. These horses were huge! Apparently, the horses were used to transport beer to the bars. I didn’t get a picture of the next room, but it’s pretty fun! It was a 4D ride called Brew Your Ride, and you essentially stand in this platform with other visitors and watch a film where you are basically Heineken beer. You go through the whole process including how you would be bottled up if you were the beer. It was pretty neat since the platform would move and water would squirt out to give effects.

Finally, we got to sample some beer! I think most of us were just looking for beer. They should’ve totally given us a beer to begin with so we could sip on it while going through the tour. The worker told us how to truly taste a beer and how to smell and see if it’s good beer. He also taught us the differences between Heineken and other beers. Some cold beer was perfect! 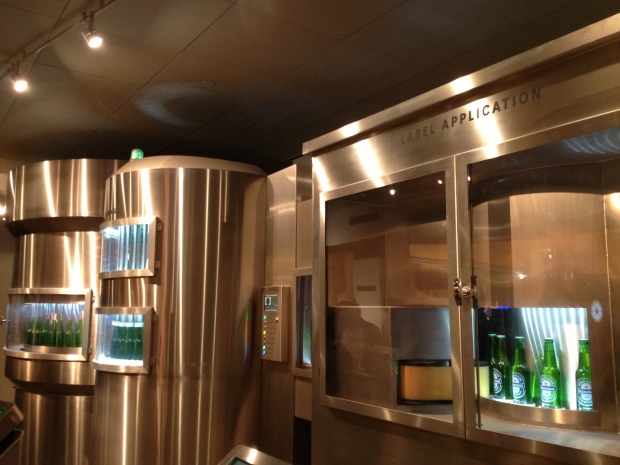 Next, we saw how the beer was bottled up with labels applied. This was really cool since you were able to customize your own label and you could see your customized bottle go down the production line. 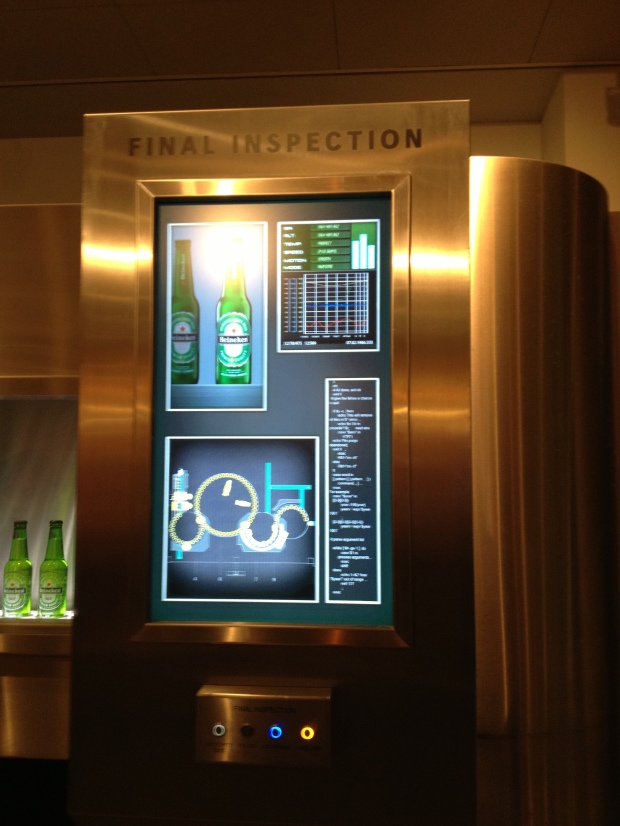 They also had a final inspection! Some of our friends purchased this, but had to drink the  beer in the end, since we were taking budget airlines with no checked luggage. So be warned that if you’re taking a budget airline, it’s probably not worth your money to purchase this, unless you don’t mind the bottle being uncapped. 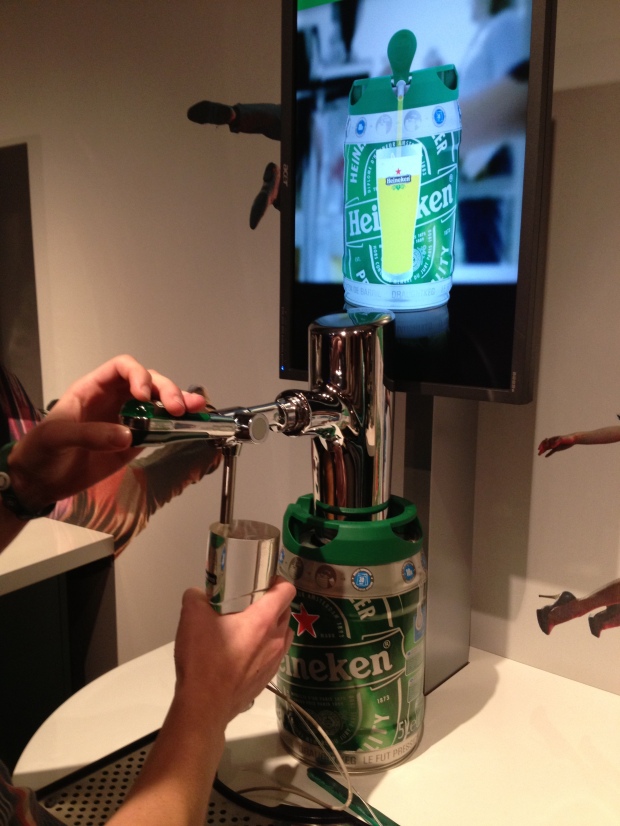 Another section became tons of interactive games and such. They had plenty of screens where you could take pictures or videos with their branding and you could send it to your email. There was also a room with the advertisements they had used in the past and just tons of beer bottles decorating the ceilings and walls. Another interactive game was challenging yourself to pour beer from the tap perfectly. They also had a real life draught challenge and you could get a certificate to say that you had perfected pouring beer. However, that required two of your tokens from the wristband.

Instead, we used the tokens to trade ourselves some cold beer! Finally, we were able to just relax and enjoy ourselves in their Heineken World Bar. The Heineken Experience ends with the gift shop, which has some pretty cool gifts. You can also customize your beer glasses or mugs with etched names.

Overall, I thought it was a decent activity with friends. I’d suggest it if you were here for more than a day and have spare time. I’m not a huge beer fan, although Heineken is one of the beers I prefer more. I do find the admission price to be a little pricey for what we got. Learning-wise, I didn’t think I learned that much. It might’ve been better if someone was taking us around on the tour so we could just hear the explanations in person. Didn’t really enjoy the reading part of the tour..but that’s just me. Apparently you’re also able to get a water taxi to go to the Heineken Gift Shop across town to get the free gift, but we missed the last taxi, so we never got the gift.

After water-biking at Granville Island, J and I were thirsty and walked by the Granville Island Brewing Taproom. I’ve never been here, so we decided to grab an afternoon drink to quench our thirst.

The taproom was quite packed, but we luckily found a seat by the bar. You basically just walk in and find a seat wherever you like. Pretty much like any pub. In the back, you can see all the machines brewing the beer.

They have a tasting map with the 8 different beers they have. I’m not a huge fan of beer, so I honestly had no idea what I was ordering. I did however go to a beer tasting event before, so I learned a little, but still not enough to call myself an expert (not in close actually).

They had a special going on where you could try 3 different kinds of beer on tap at around $9 I think? The glasses are around half the size of a normal pint, but it’s perfect if you want to try different types of beer. I chose to try the Hefeweizen, which was described as a unfiltered wheat ale, and is vaguely tart with light clove and banana flavours and aromas. It finishes crisp and dry. I definitely tasted the banana flavours to it, which was quite interesting, but I did find it to be a bit dry, like it said. Next I tried the Raspberry Ale. I keep seeing this advertised around Granville Island, and because of it’s pink colour, I always assumed it would be a girly beer. I believe it’s only available during the summer as it is a seasonal ale, and combines premium malt and hops with Fraser Valley raspberries. It is well-balanced with raspberry colour, aroma and finish. It tastes like fresh raspberries, without being too sweet, and is refreshingly tart with enough pale malt character, so it tastes like an ale, and not a wine cooler. This was definitely one of the sweeter and fruitier beers, and probably my favourite out of the three. Last but not least, J chose the Small Batch, which we were told was basically a dark ale. It was super bitter! Definitely not something I would drink normally, and it left a bitter aftertaste in your mouth.

If you want to try out different beers at a decent price, the taproom at the Granville Island Brewing is the perfect place to go. It gets quite busy during the summer afternoons, and I would assume it’s even busier during night time.