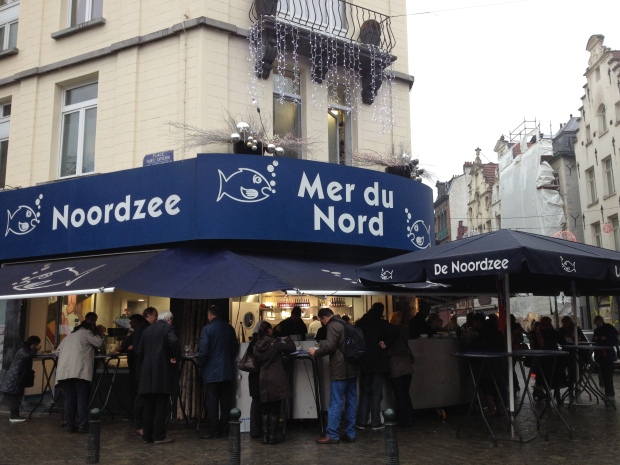 Following a week of school, which was also my last week of school, the weekend came and off I was to another country again! C, a foodie from Hong Kong and I had planned this trip around a month ago. We found flights for 30 euros round trip from Barcelona to Brussels and we couldn’t say no! Belgian waffles, chocolate, fries, beer, mussels… yup no foodie would say no to such a cheap flight! Obviously, it wasn’t a fancy flight with Ryanair, but we’re pretty much used to those early morning, pass out on the plane flights. When we arrived at the airport, which I believe isn’t their international one, we had to take a bus to the city center. Then once there, we took a metro and arrived at our guesthouse which I’ll talk about more in later posts. We dropped off our backpacks and off we went to explore the city. It was a shame that it was raining in Brussels most of the time we were there, but at least it wasn’t pouring rain. We walked by Noordzee Mer du Nord and C pointed out that she had read it was a must visit! With crowds eating there even in the rain, we knew it must’ve been good! The place has no seats, but only a long bar table along the kitchen, or some stand up tables pitched with tents to cover you from rain. No seats though. 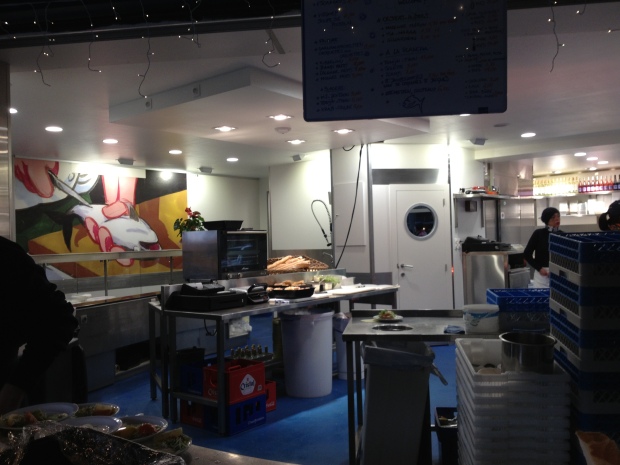 Their kitchen is open, so you can watch them prepare the food.

The famous item that we saw everyone getting was the Fish Soup. This was absolutely delicious since it was a chilly, rainy day and something hot was perfect! However, we did find that the soup was more like a vegetable minestrone soup. There were fish pieces inside, but the vegetable soup was so strong that it covered any fish flavour. The best part was the side of bread that had some sort of mayo and cheese on top. We asked the man how to eat this, and he said do whatever you want! He said he usually threw the whole piece in, so we did too! That was awesome because the cheese would melt right away in the soup, and the mayo gave the soup some creaminess. So good! Another two slices of just plain bread was also complimentary for each soup. A must try!

We also decided to get another dish and chose the Grilled Scallops. Mer du Nord’s menu is basically all seafood since they are known for their fresh fish and seafood. We decided to go for the Grilled Scallops, which are by piece and quite pricey. Sadly, we were a bit disappointed in them. Not that they weren’t fresh or grilled perfectly, but that the flavour of the sauce wasn’t too appealing for us. It was more of a onion based sauce, and we had imagine something like a white wine or garlic sauce. Something was a little odd about the sauce, or we just weren’t too accustomed to this type of flavour. Nevertheless, the scallops were extremely fresh and cooked well.

Overall, Mer du Nord is definitely worth checking out when in Brussels. It’s sort of like a quick place to grab a bite without having to sit down. The food is fresh and of good quality, although I find that the prices are a little pricey. However, other than tourists, you find many locals here. They come here for a glass of wine with their fish soup and select a variety of other seafood dishes. Everything looked delicious!