I was responsible for looking up places to eat and within our budget. Since Europe doesn’t use urbanspoon, I’ve been relying on Tripadvisor. I found this top rated restaurant that was at a reasonable price range called Na Zlate krizovatce. No idea how to pronounce it, once again. The interesting thing was that the restaurant was well known for being gluten-free. I’ve never really had gluten-free food other than gluten-free bread, but my friends were excited to give it a try. I mean, it sounded like a “healthy” meal! The restaurant is located pretty far from where we stayed. It was dark at night and the streets were pretty quiet. The restaurant wasn’t situated in a lively area, and it was a little hidden, especially in the dark. 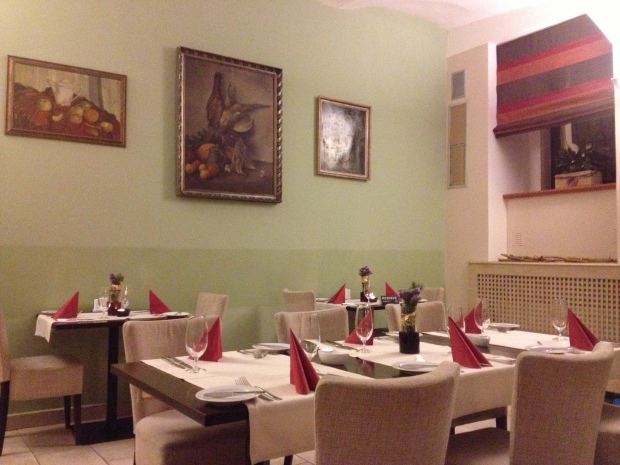 The interior is very fancy looking and very quiet. There were around 2 other tables of diners when we arrived. It’s definitely more like a place to bring your date to since it’s got a bit of the romantic ambiance to it. Actually, we found a table later with a couple meeting the parents which was interesting.. So yea, that type of setting. Well, we were a group of friends and we kept our voices low and it wasn’t that awkward and bad after all. The prices are actually quite reasonable too, which our whole meal being under CAN$20. But then again, the cost of living seems to be substantially less compared to Vancouver. 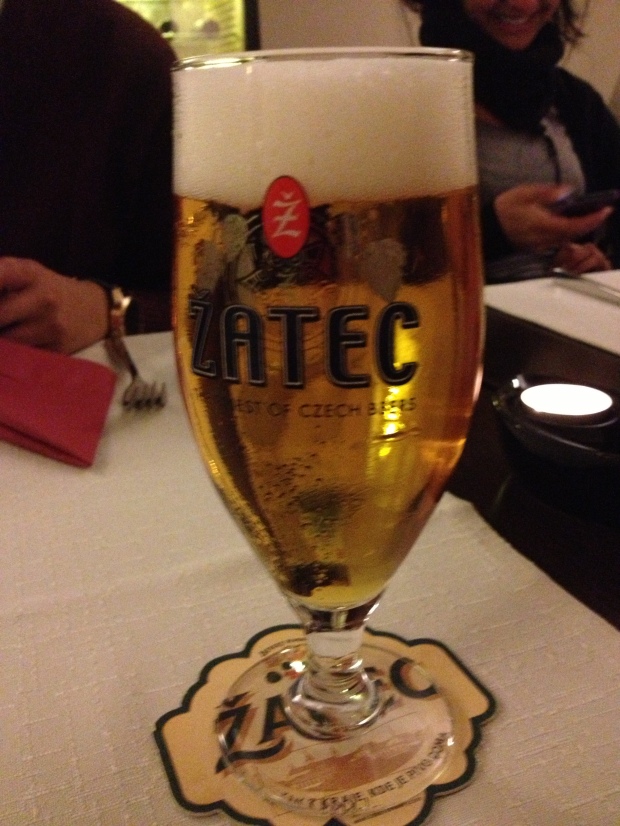 Again, U and I decided to try out some Czech beer. Whenever we go on a trip together, we seem to be determined to try some local beer. Zatec is an old town in the Czech Republic and apparently this beer’s brewery is now situated in the Zatec Castle. Pretty cool! Anyways, I’m not a huge beer person, so I don’t know much about beers, but to me, it wasn’t very bitter. That’s basically all I care about.

Again, we got complimentary bread, and the owner said it was their homemade gluten-free bread. D didn’t really like it since she thought it was too dense, which is true because it’s more difficult to get soft and fluffy like normal wheat bread. It definitely didn’t taste as good as wheat bread, but I wouldn’t say it was terrible. The texture is a bit gritty too. Again, it came with two spreads – a butter and some sort of fat mixed with herbs. I guess using fat as a spread is really common here! K and I actually really liked this herb spread, although I don’t know how healthy it is…

I wasn’t sure which entree to get, so I asked the server for suggestions. He suggested the Roast Pork with Dumplings. This was average. The roast pork wasn’t super moist and I found it a little dry. The sauce was really good though. The dumplings were good at first, but after a while, I found that they were really dry and I really had to dip them in the sauce to moisten them. Not sure if it’s because they’re gluten-free, hence that texture. It’s sort of like eating bread pudding, or those German bread dumplings. A little chewy, but I found these much more gritty.

To be honest, I found that most of the food on the menu was gluten-free anyways. Like if you order the roast pork or duck or chicken, the meat is gluten-free. Only the sides have a chance of having gluten. So basically, I felt like I was just eating typical food and nothing too special. On a side note, I visited their website, and it says that they have closed due to some health concerns. Not sure what happened, but it sounds like they’re permanently closed.